- GBP/EUR faces volatility as Brexit saga descends into a soap opera.
- Ratchet-clause row indicates deal in the bag, but phoney war ahead.
- Continuing talks augur short-term recovery, but upside seen as limited.
- GBP opens at 1.0911 support, faces resistances at 1.1132 and 1.1281.

The Pound-to-Euro exchange rate faces a testing period of heightened volatility and political theatre in the weeks ahead as a likely-phoney war plays out between London and Brussels over a straw man in the Brexit negotiations.

Pound Sterling could be in for a tepid and cautious recovery to open the new week after Prime Minister Boris Johnson and European Commission chief Ursula Von Der Leyen announced on Sunday that Brexit trade negotiations would continue beyond the latest "final deadline".

But the British currency could suffer further punishment in the coming days if political rhetoric from either side compels investors to again price-in a greater probability a 'no deal' Brexit from the transition period on December 31.

We had a useful call with @BorisJohnson this morning.

We agreed that talks will continue.https://t.co/rZpN4PmS1i

"There are just two key things where we just can't seem to make progress and that's the kind of ratchet clause they've got in to keep the UK locked into whatever they want to do in terms of legislation, which obviously doesn't work,and then there's this whole issue of fish," Johnson said Friday from the National Renewable Energy Centre in Blyth.

A row over a so-called ratchet clause relating to EU rules and regulations, which was reportedly demanded in the final throes of the negotiations, was the origin of Johnson's warning last week that a 'no deal' Brexit is now most likely and the source of Pound Sterling's losses.

This red herring could be more of an indication that a deal has already been reached than of failure by negotiators to settle differences in the talks.

“We didn't make any progress on these rules of economic and commercial fair play, despite choosing to focus this week on issues that should have been more consensual, such as non-regression mechanisms on...,” says Michel Barnier, on June 05 after the fourth round of negotiations. “On all these points, we are asking for nothing more than what is in the Political Declaration.” 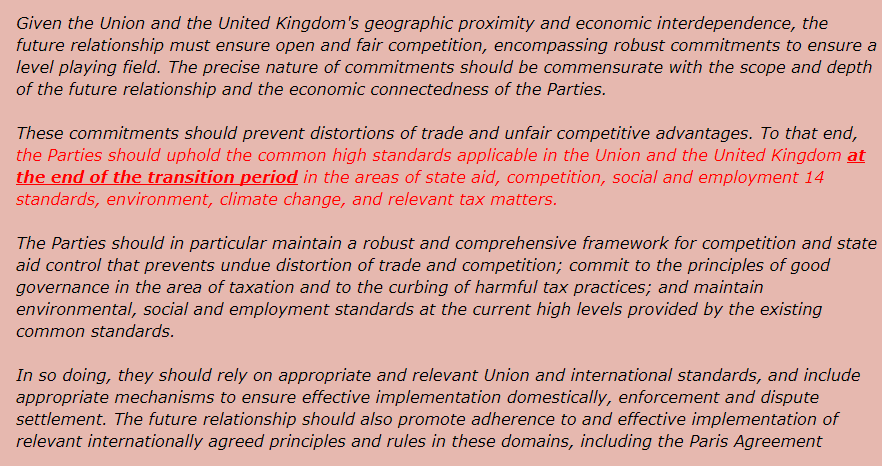 The new clause, which would require a dynamic UK alignment with EU rules as they evolve in various areas else British export goods face tariffs, has never been the formal objective of an EU negotiating team that has argued repeatedly in the four year Brexit saga that both sides should honour the withdrawal agreement and accompanying political declaration.

The EU has sought throughout to have the UK retain only its existing rulebook as it exists at the end of the Brexit transition period, in addition to a mechanism for enforcement in the event of a breach by the UK. 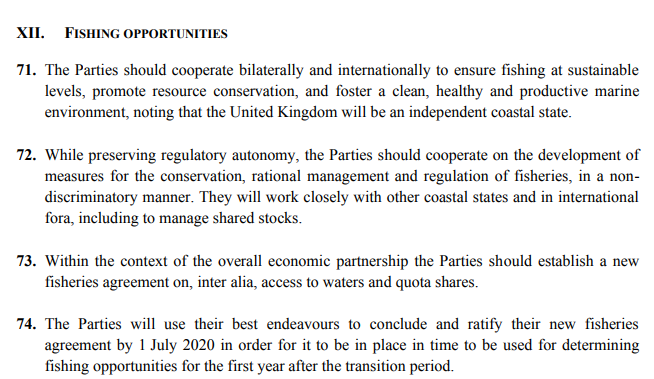 Above: Boris Johnson's political declaration. Text relating to the fishing.

Rather than a serious negotiating pursuit, Brussels' demand for dynamic alignment could simply be an act of benevolence toward a British Prime Minister who's already conceded defeat in the battle over whether existing EU standards should continue to apply in the UK after the transition period ends.

Johnson, who agreed in his political declaration to keep the EU's rules on various matters before attempting to abandon the commitment once talks began, now needs to contrive the appearance of some kind of win in order to sell his agreement to Conservative Party lawmakers and supporters.

A contrived win requires a phoney war where the risk of 'no deal' seems legitimately high, only for an agreement to eventually be announced. Credit Suisse warned clients weeks ago of exactly this situation potentially blighting Sterling exchange rates into year-end.

"Our base case has been that, even if a deal ultimately is reached, the need to sell it domestically in the UK requires a period during which the odds of failure look legitimately high. This is because the concessions on level playing field rules / supervision and possibly even fisheries that will be required to satisfy the EU are quite likely to be seen as a defeat by more hardline elements within the UK," says Shahab Jalinoos, head of FX strategy in an early December research note. "The more fraught and difficult talks appear, the more chance Johnson has of presenting any outcome that emerges as a hard-fought victory as opposed to a humiliating climb down, whatever the actual substance. In this context, we have retained some skepticism about being short EURGBP."

The Pound-to-Euro rate was down -1.48% for the week by Friday, while others like GBP/AUD saw heavier losses of up to -3%. 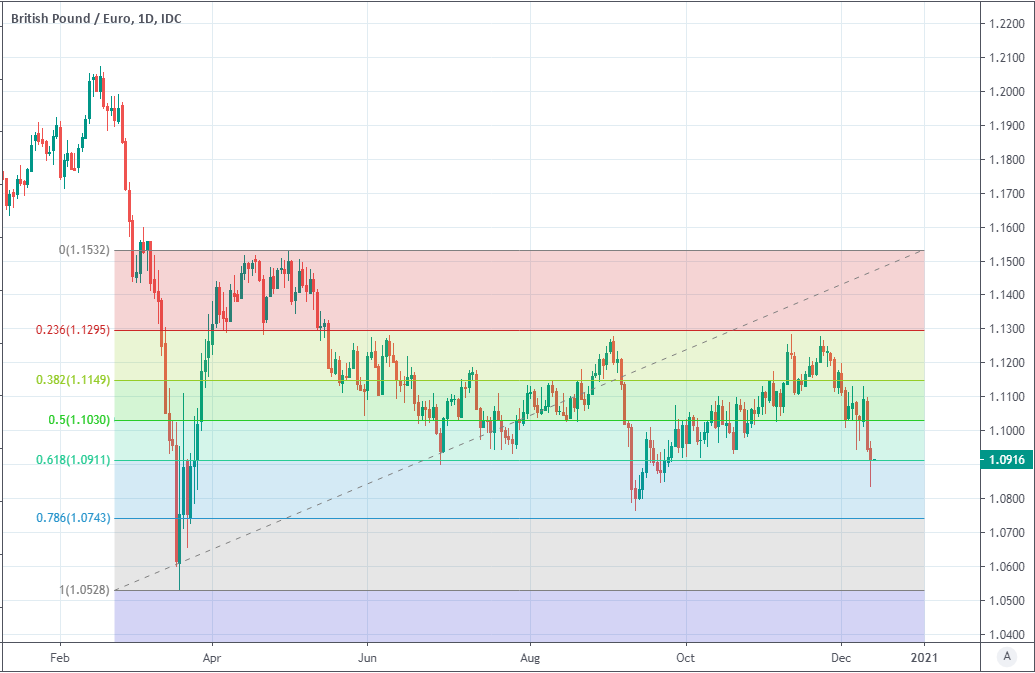 "As in previous episodes of the Brexit drama, it is hard to know what to make of the various rumours and smoke-signals," says Jonas Goltermann at Capital Economics. "Options market pricing suggests market participants are still very worried about Brexit. Since Sterling hasn't fallen much yet, and investors appear undecided, there looks to be ample scope for a large fall. That said, if the Brexit process has proven anything, it is that "final" deadlines are often extended; EU leaders are world champion can-kickers."

Sterling enters the new week perched on the 61.8% Fibonacci retracement of its post-March recovery, located around 1.0911, from where it could recover in the early part given that the talks are continuing. But it faces resistance around 1.1132 and 1.1281, according to technical analysts at Commerzbank.

Fresh losses could easily materialise in response to any suggestions by the Prime Minister later in the week that a relationship governed by World Trade Organization terms and Most Favoured Nation tariffs rates remains likely.

Opinion varies widely on exactly how far the Pound could fall if such an exit actually takes place, although September's lows beneath 1.08 are within arm's reach and suggestions of levels near to parity are still plentiful.

"It has been hoped that a deal on tariffs and quotas would set the stage for further talks in the New Year for various part of the economy including key issues such as equivalence in financial services and on various security issues. There is still speculation that such talks could take place under a ‘friendly’ no-deal," says Jane Foley, a senior FX strategist at Rabobank, who sees Sterling at 1.0526 in a WTO scenario. "The implication is that the immediate impact on the pound of any confirmation of a no-trade-deal Brexit on Sunday is likely to be nuanced by the accompanying tone taken by politicians....If a deal is struck we expect EUR/GBP to return to the 0.89/0.88 area [GBP/EUR: 1.1111-to-1.1235]." 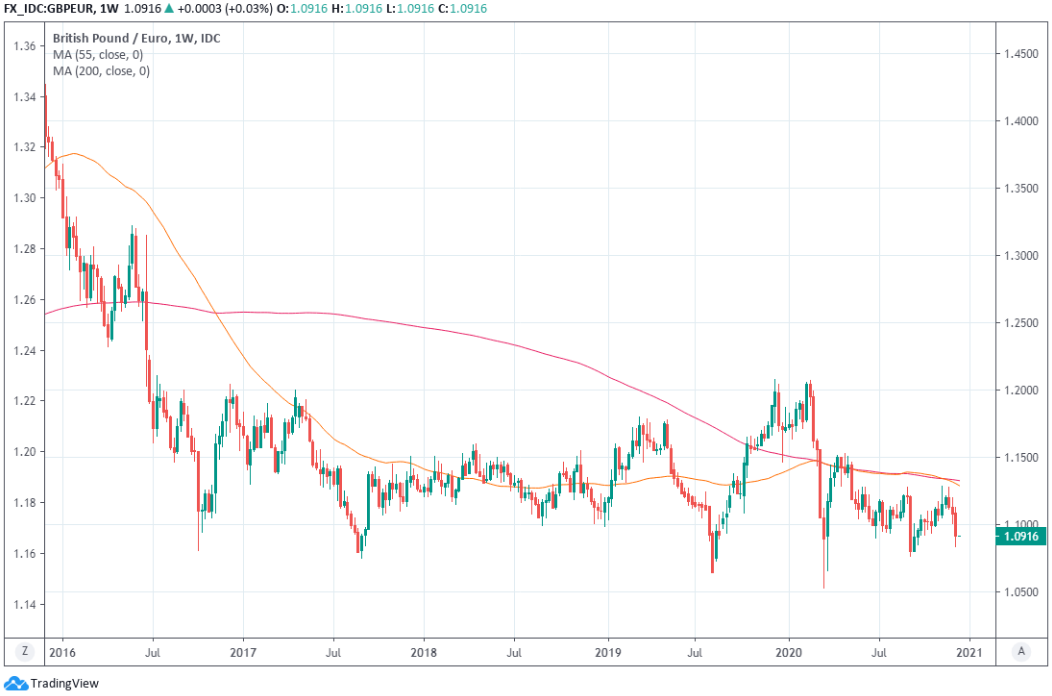 Above: Pound-to-Euro rate shown at weekly intervals with 55-week and 200-week (black) moving-averages.