The latest monthly data from payments engine SWIFT has shown payments in euros for October was larger than the amount of payments made in dollars, however the dollar still outstripped the euro when it came to international monetary transactions.

The data has however been potentially misconstrued by one prominent newswire which has been accused of failing to identify the relevant data when determining the share of various currencies in international payments.

"Dollar Loses to Euro as Payment Currency for First Time in Years," says a headline on Bloomberg on Thursday. The article states, "the euro was the most used currency for global payments last month" and that the data comes from Swift, "which handles cross-border payment messages".

The headline is however "at best misleading", according to one economist.

"One news agency reported this morning that the euro had overtaken the dollar as international payment currency for the first time. I am not sure whether others will take up this report. If so, please be warned: that is at best misleading, if not simply untrue," says Ulrich Leuchtmann, Head of FX and Commodity Research at Commerzbank.

"The communication service SWIFT, via whose systems the major part of payment flows between banks is handled, publishes monthly data on which currency dominates which share of these flows. In the overall data for October the euro really has taken up a slightly higher share than the US dollar for the first time (37.8% against. 37.6%). However: This data also contains payment flows within one country or currency area.

"They therefore say nothing about the importance of a currency in international monetary transactions. It is hardly surprising that the euro is mainly used within Europe and the dollar within the US. A currency does not become lead currency because there is a particularly large volume of SWIFT payments within one currency area."

According to the economist, the data that gives a better guide on a currency's share of international payments is the subset of data from SWIFT regarding "cross border" payments, which excludes payments made within the Eurozone.

This data shows the dollar accounts for a 41.7% share of cross border payments against the euro's 38.5%. 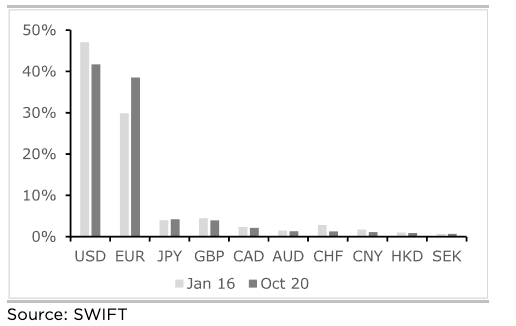 Leuchtmann says his team pointed out to "the news agency in question" that it is looking at the wrong set of data, "but they did not understand what we were saying".

While the dollar is still the premier currency of global trade, the data nevertheless indicates the euro is gaining on the world's default reserve currency.

In contrast to October's figures, in January 2016 the euro commanded a 29.9% share of payments while the dollar commanded nearly half at 47.1%.

"It comes as a surprise to economic historians and theorists that there is such a strong number 2 these days. Usually foreign traders of this world should agree on one lead currency. Everything else is not really efficient. The fact that that is not the case illustrates that the attractiveness of the greenback as a lead currency has fallen dramatically," says Leuchtmann.

The Commerzbank economist says the only real alternative to the dollar for international payments is the euro.

"All other currencies are far behind in international payments. The yen is in position number 3 with a meagre 4.2%. And the renminbi is in position 8 with only 1.1%. In view of the fact that China is the foreign trade nation number one that constitutes the maximum possible scathing judgement for the Chinese currency coming from foreign traders and financial markets. And it is the basis for our long-held view that all the talk about a possible future role of the renminbi as world currency is completely unsubstantiated," says Leuchtmann.