Pound Sterling's rally against the Euro - in place since September - has paused, amidst a combination of technical resistance to the move as well and rising tensions as post-Brexit trade negotiations enter their final and most crucial phase.

The Pound-to-Euro exchange rate spiked to a new two-month high on Wednesday at 1.1285, but subsequently retreated.

A look at the daily chart reveals a solid level of historical support located in the the 1.1280 region that suggests a technical barrier where market participants layer orders to sell pounds and buy euros: 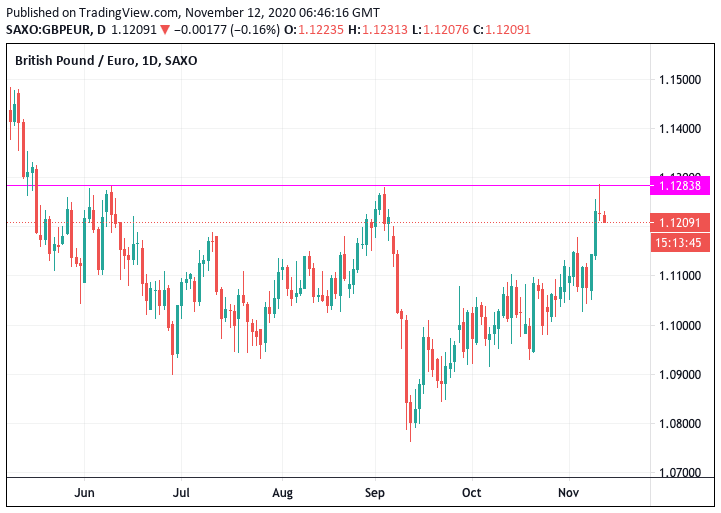 Above: GBP/EUR daily chart. If you don't want to miss out on beneficial market moves in the future, we recommend setting a limit order with your FX provider, learn more here.

The technical significance of this can't be understated as advances by the Pound have been thwarted at this level twice in the past year; further boosting this significance is the observation that it provided support to Sterling when GBP/EUR weakened in April. Therefore a break above here would open the door to further gains and any subsequent weakness would likely fade in a retreat as 1.1280 turns into support.

The failure to breach this level and the subsequent capitulation suggest the move higher in GBP/EUR has come to an end, for the short-term at least.

The technical failure converges with a significant fundamental story: post-Brexit trade negotiations are entering their final, and most crucial, stage.

EU and UK negotiators are locked in discussion in London ahead of next week's meeting of EU leaders, which was posed as the deadline for talks by both sides over recent months.

A deal must be agreed by leaders by November for the EU parliament to pass it into legislation by year-end, as such pressure on negotiators to make enough progress before the European Council summit on November 19 has grown.

It was revealed on Wednesday that the prospect of a delay was likely, news that contributed to a reversal in Sterling exchange rates.

Reuters reported midweek that talks in London are expected to run through the end of this week and ambassadors from 27 EU countries will be updated on the status of talks in their meeting due to be held on November 18, a day before the European Council summit where EU leaders are to discuss Brexit.

EU sources told Reuters they now expected negotiators to come up with an agreed text in the middle of next week, unless talks collapse or there is a breakthrough earlier.

"The real cut-off point is late next week," an EU diplomat told Reuters. EU diplomats said the agenda could be updated at the last minute should the negotiations yield a breakthrough or collapse.

"I think it is quite possible this could fall apart and we don't get a deal. That wouldn't shock me at all," Simon Coveney, Ireland's Foreign Minister said in Dublin. "I think this week and next week are crucial. If we don't have a deal at some point next week, we have real problems."

The Pound tends to react to increased political uncertainty by losing value, therefore should the two sides fail to reach a deal by next week more substantial declines become a possibility. Neil Wilson, Chief Market Analyst at Markets.com warns that Sterling 'bulls' could still get caught offside by a breakdown in Brexit talks before ultimately a deal is sealed at the last minute. "They might be right but their timing may be wrong."

The final hurdle to cross appears to be that of level playing field provisions for businesses - i.e. how far business standards set by the EU and UK can diverge before threatening the deal.

The EU is believed to be pushing for the UK to sign up to a system whereby the two sides allow standards to evolve together over time and have a mechanism that would restrict access to the EU market if the UK diverges too far.

UK negotiators are reportedly willing to discuss shared common principles for subsidy law as a compromise, which they feel is unprecedented in a traditional free trade agreement.

The UK is however anxious that the new system would be entirely novel in trade deals but the EU insists such a mechanism would bring predictability, fair competition and is the price of the zero-quota, zero-tariff trade agreement.

Despite the November deadline fast approaching, market commentators and analysts are unconvinced that overshooting the deadline will spell the end of negotiations, a view that could limit any downside damage done to Sterling.

But it is not just Brexit that is of interest to foreign exchange markets, and the Pound in particular.

News that a successful covid-19 vaccine candidate has been developed by Pfizer and BioNtech has boosted broader investor risk sentiment.

Sterling appears to have been a notable beneficiary as the UK was the first country to sign a binding deal with Pfizer for the vaccine and is at the front of the queue to gain access to stocks.

As such, the UK could gain a first-mover advantage on finally exiting the pandemic.

"Notable that UK could have Pfizer vaccine first. Adds support for UK services sector. Access to vaccine likely to become a factor down the line as some economies can get back to normal before others," says Joshua Mahony, Senior Market Analyst at IG.

"One currency which could do very well from vaccine developments, is Sterling," says Kit Juckes, Global Head of Foreign Exchange Research at Société Générale.

"The UK economy, which suffered one of the worst contractions out of the developed nations due to its reliance on the services sector, is likely to benefit considerably if a vaccine is successful," says George Vessey, UK Currency Strategist at Western Union.

Vessey says should the risk rally continue and Brexit optimism persist, Sterling should extend higher. He says the Pound-Dollar exchange rate might have the 1.35 mark in its sights and GBP/EUR traders are eying the 1.15 level.

Juckes however says Pound-Dollar could go as far as 1.40. "Sterling, like every other major currency except for the yen, is up against the dollar too. But the elephant remains in the room, in the form of UK/EU trade talks. The Kiwi's reaction to rates not being cut again, just reinforces my belief that a trade deal could take GBP/USD to 1.40 in the coming weeks," says Juckes.