-GBP/EUR seen consolidating pending Brexit and virus outcomes.
-Brexit hopes build on EU optimism but coronavirus threat returns
-Threat of new ‘lockdown’ disruption a prominent risk for the GBP.
-GBP/EUR confined to 1.0726-to-1.1008 range in the week ahead.

The Pound-to-Euro exchange rate is consolidating pending the outcome of the Brexit trade talks, which are still a risk to Sterling although rising coronavirus infections and its threat of a new ‘lockdown' also pose a potential threat to the British currency this week.

Sterling fell ahead of the weekend, eroding handsome gains for the week against most major rivals after the government announced new restrictions on freedoms in the North of England and press reports hinted at new measures for the rest of the country amidst data that showed covid-19 infection rates were moving higher.

Expect a combination of Brexit news, covid-19 news and the release of PMI data for September to dictate direction for the Pound this week.

European Commission President Ursula Von der Leyen told the FT in an interview last week she’s “convinced” a Brexit trade deal can still be done ahead of a deadline of mid-October, enabling a ‘no deal’ exit from the transition period at year-end to be avoided. .

“A quasi World-Trade-Organisation-rules Brexit would be mitigated by provisions from the UK to limit border frictions, but would nevertheless put the UK at a high risk of seeing a W-shaped recession. Even a basic free-trade deal would be a ‘hard’ Brexit,” says David Meier at Julius Baer who looks for Sterling to hit 1.0638 by year-end. “Our conviction in our Bearish 3-month forecast of EUR/GBP of 0.94, which foresees further weakening of the pound, is rising.” 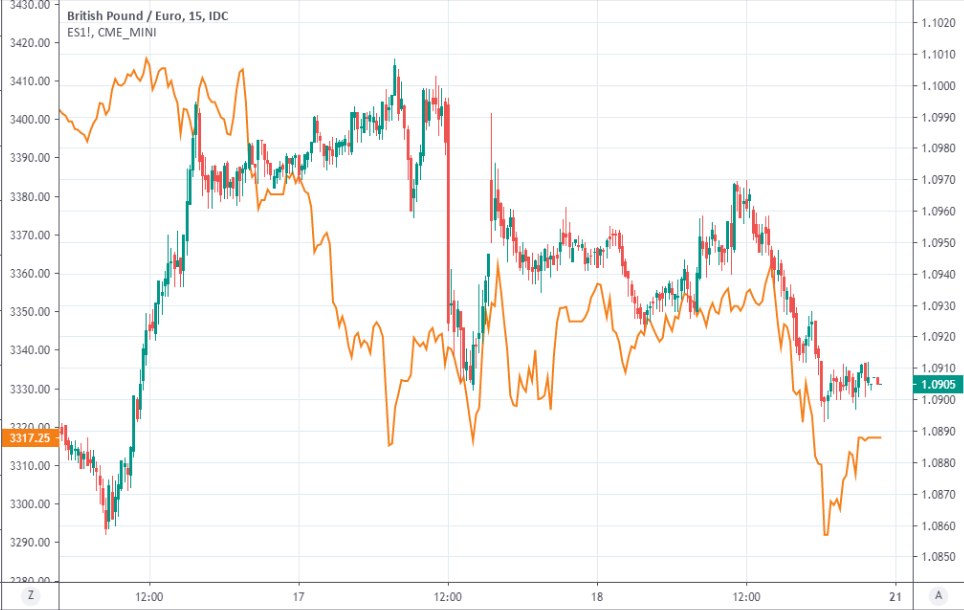 Technical analyst Karen Jones at Commerzbank says the Pound-Euro exchange rate looks to be consolidating ahead of a further move lower. Jones sees GBP/EUR falling to 1.0726 before long noting that the market "remains within the realms of a correction only".

"We view this as the market pausing," says Jones.

We will also be keeping an eye on stock markets, as the Friday's sell-off appears to have correlated with a decline in Sterling (See graph above). Sterling enters the new week trading around 1.09 and could rise if investors rediscover their appetite for risk and markets recover.

Improved sentiment and stabilising stock markets could see GBP/USD advance to 1.31 and a level noted by Jones as technical resistance while EUR/USD returns to its equivalent just above 1.19, which would take GBP/EUR back above 1.10 and even higher still if sentiment toward Sterling also improves.

However, in a risk-averse market that’s dominated by Brexit and coronavirus concerns the Pound-to-Euro rate would risk falling as far as 1.0726, which is Jones and the Commerzbank team's target.

Brexit trade talks continue through the week ahead and are a key factor in the outlook for the Pound but an arguably greater risk this week is the government’s response to the second coronavirus wave said to be sweeping the country.

“A new risk-averse religion with devotees kneeling to the great NHS deity has been born. The question is whether the government decides to ‘follow the science’ or not,” says Neil Wilson, chief market analyst at Markets.com. “Cases are certainly up, but the number of tests being carried out daily is exponentially higher than it was in March and April. The worry, of course, is that there is a lag of a couple of weeks and the rise in cases we have seen translates into a spike in hospital admissions in a fortnight.”

If tighter measures to counter the spread of infections is introduced the nascent UK economic recovery could be reversed which would weigh heavily on Sterling. 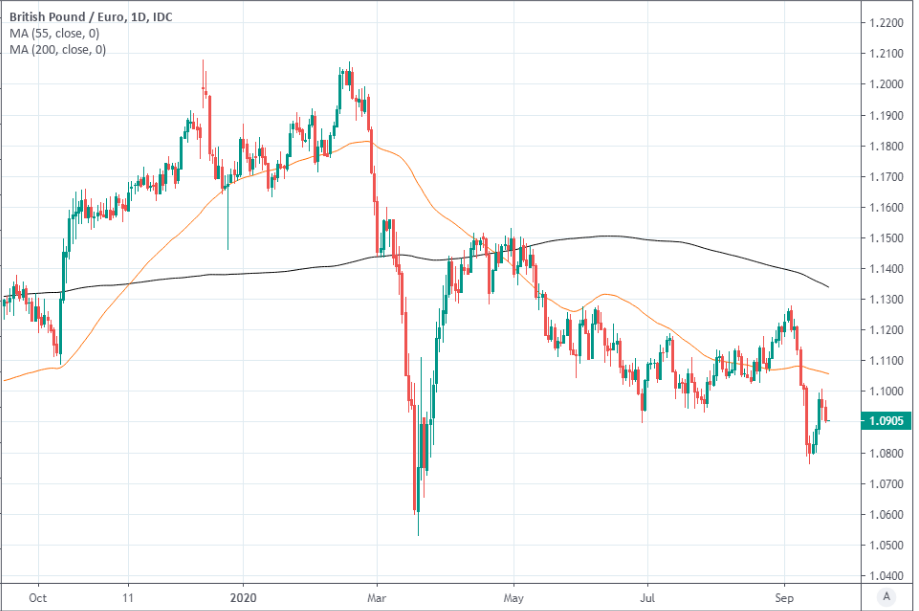 Prime Minister Boris Johnson claimed on Friday that he doesn’t want another national shutdown but also warned that one could still be likely, citing an increase of new infections. The government declared  4,422 new infections on Saturday, the highest number it’s disclosed since early May, but little has been said about record low numbers of new deaths.

New 'cases' rose from 829 on July 01 to 3,991 for September 16, according to the government, but in that time the seven-day average number of deaths fell from 37.3 to 11.85 and total deaths reported for September 16 were just 6. More than a month after new daily 'cases' rose back above 1,000, the death rate had fallen below 0.1% and was still declining despite fatalities often exceeding 15% of new infections disclosed during the first wave.

Health Secretary Matt Hancock said Saturday that if Britons don’t follow “the rule of six and the need to self-isolate if you have a positive test or if you are contacted by NHS Test and Trace,” then “ we will have to take more measures.”

“While we think it's unlikely that we move into a full national lockdown – at least at this stage – we think the government will likely resort to 'softer' measures in the near term to keep infection rates in check,” says Sanjay Raja, an economist at Deutsche Bank. “Stricter social restrictions will weigh on the UK's recovery. This is one reason we expect the recent GDP surge to be short-lived. With restrictions tightening, we think the scope for more policy easing has risen. On fiscal policy, more spending – as per our original baseline – looks even more likely. The Treasury has already started handing out local business grants for firms mired in local lockdowns (to the tune of GBP 1,500 per property every three weeks). Should the hospitality industry require further targeted tightening, more grant funding will likely be handed out as well. And on the labour market, we continue to think that further targeted support for jobs is probable.”

Any further tightening of restrictions would only serve to hamper the economic recovery and weigh on Sterling at a time when Brexit concerns are already doing that, while not necessarily doing much to curtail the spread of infection.

Looking at the calendar, the highlight of the week with be the release of flash PMI data for September on Wednesday.

"On Wednesday, the UK September PMIs will indicate whether the recovery in economic activity is starting to level off or gaining more traction. Nevertheless, the high risk of no trade deal between the EU and the United Kingdom will continue to weigh on the UK overnight index swap market and limit GBP upside," says Joseph Capurso, Head of International Economics at Commonwealth Bank of Australia. 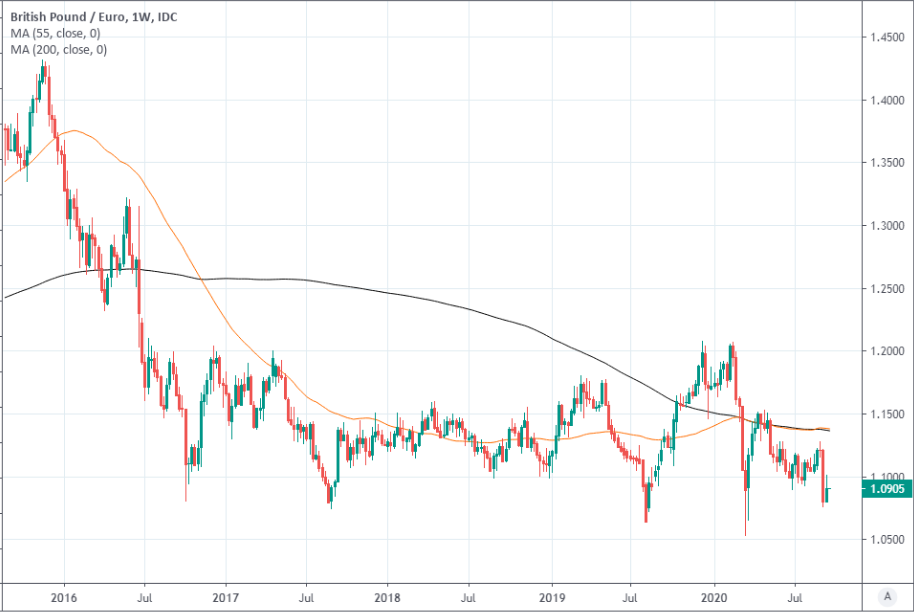 Bank of England Governor Bailey meanwhile speaks twice this week, first at 08:30 on Tuesday and the second at 15:00 Thursday .

Sterling will likely pay close attention to Bailey's words after the BoE said last week that preparations are underway for a shift to negative rates but gave no clear indication of whether and when its quantitative easing programme will be bolstered with new money.