- GBP/EUR charts point toward an extension of current rally.

- And GBP bond yields are elevated, vulnerable this week.

- While EUR to benefit from contagion of coronavirus fears.

The Pound was the best performing major currency last week and is tipped by technical analysts to advance on the Euro over the coming days, although fundamental risks include a likely Monday collapse in Chinese stock markets and elevated British bond yields that might be due a correction.

Pound Sterling gained 0.37% over the Euro last week after a Bank of England (BoE) decision to leave rates at 0.75% Thursday, in what turned out to be not nearly as close a call as markets had thought it would.

And studies of the charts suggest further gains are ahead, although these signals could easily be overlooked by traders.

Chinese stock markets reopen on Sunday after a week-long holiday and this will be the first opportunity for locals to respond to last week's developments in the coronavirus outbreak, which has brought the country to a standstill and threatens to cripple the economy in the first quarter.

The scale of the response will be telling of the level of panic within China and if declines in major equity benchmarks are more severe than the 6-10% falls indicated by proxies for Chinese assets this last week, then it may spook investors the world over throughout Monday's session. The Peoples' Bank of China (PBOC) has said it will inject 1.2 trillion yuan (£130 billion) of cash into the financial system via reverse-repurchase operations in a bid to ease any 'liquidity' or cash shortages. 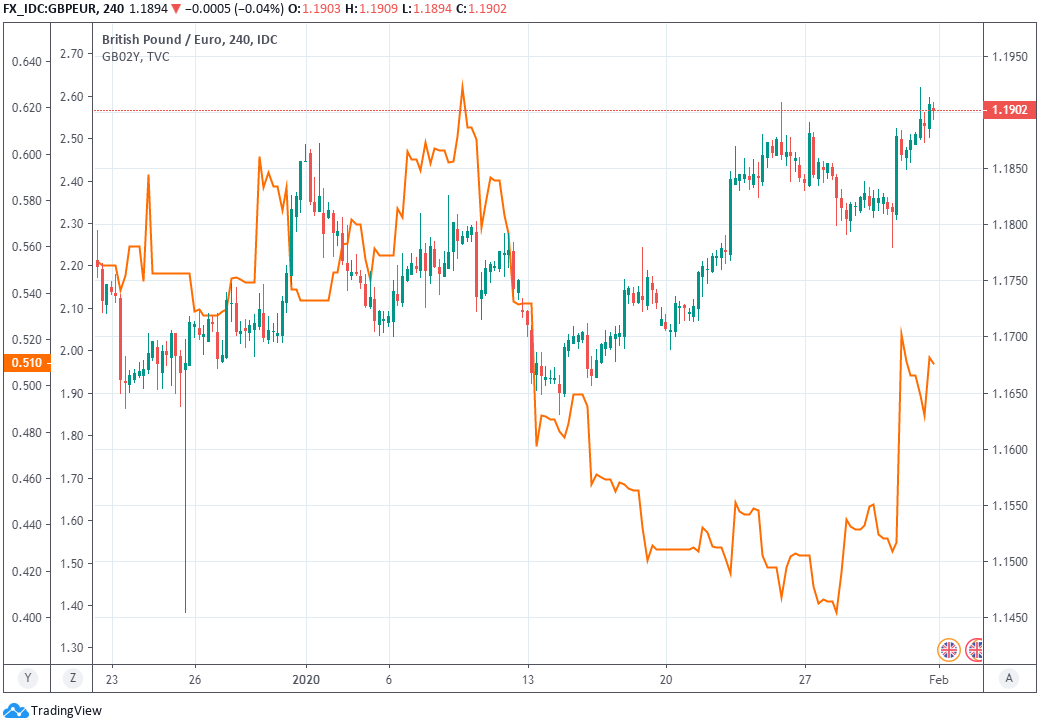 Karen Jones, head of technical analysis for currencies, commodities and bonds at Commerzbank says the Pound has successfully broken through the 20-day and 55-day moving average resistance levels at 1.1785 and 1.1764.

And now, attention turns to the 1.1933 target. This coincides with the 61.8% retracement of the Pound's December-January decline which guards the next target that is located around 1.2137-1.2156.

Jones says the Euro should remain "under overall pressure" now the GBP/EUR rate has successfully bounced off the 1.1614 support area.

Robin Wilkin, a cross asset strategist at Lloyds Bank, says the movements in the GBP/EUR exchange rate following the Bank of England's decision to keep interest rates unchanged are bullish, noting the pair had found buying interest at the pivot support around 1.1778.

Technicals studies may be pointing the Pound higher but these signals could easily be overlooked given the rapid spread of coronavirus inside China and elsewhere, which is the only story that matters for markets this week.

Pandemonium in emerging market currencies can lift the Euro-to-Dollar rate sharply, as it did throughout Friday, and if such moves are not matched by the Pound-to-Dollar rate they will almost certainly lead the GBP/EUR pair lower. 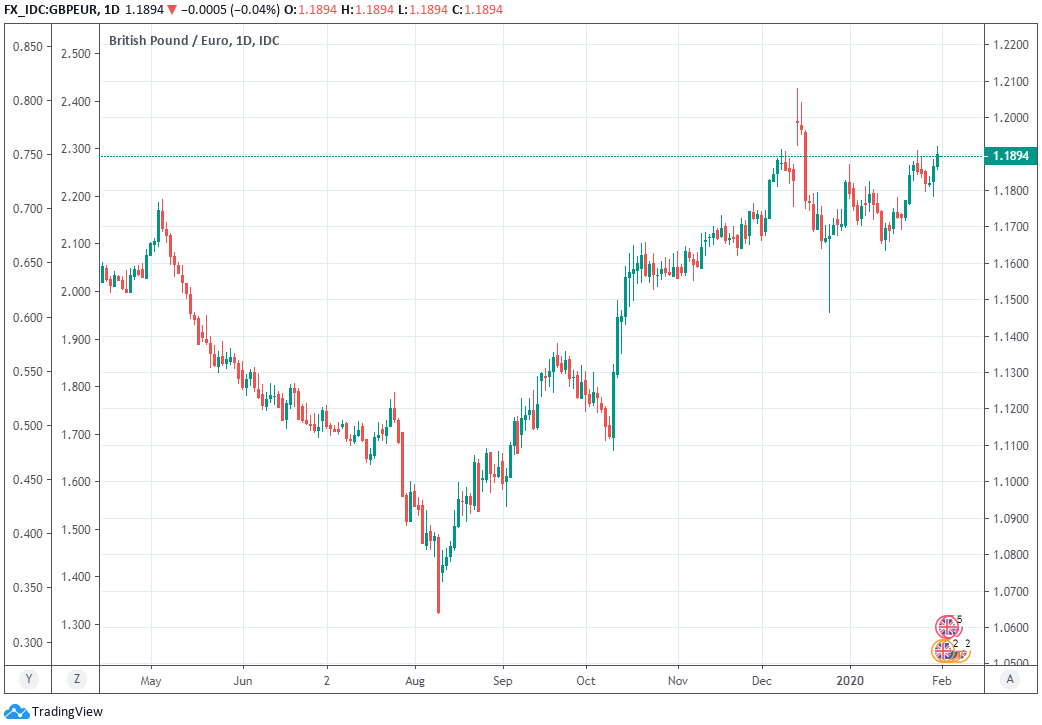 The Pound outperformed last week owing to the BoE's decision to leave rates on hold which insulated Sterling from the fallout over coronavirus, although such protection is far from guaranteed in the week ahead.

Last Thursday's BoE decision to leave Bank Rate unchanged at 0.75% has lifted short-term British bond yields in moves that could easily prove to be unsustainable, and any reversal of them could weigh on the Pound in a week that's devoid of major economic data releases from the UK.

The American two-year bond yield, which British yields tend to follow, fell notably last week and especially on Friday. Most other major economy yields also fell, leaving those of the UK government appearing incongruous. And there's plenty of reason for thinking that global yields will continue to fall in the week ahead, which could see Sterling and the London bond market playing catch-up. 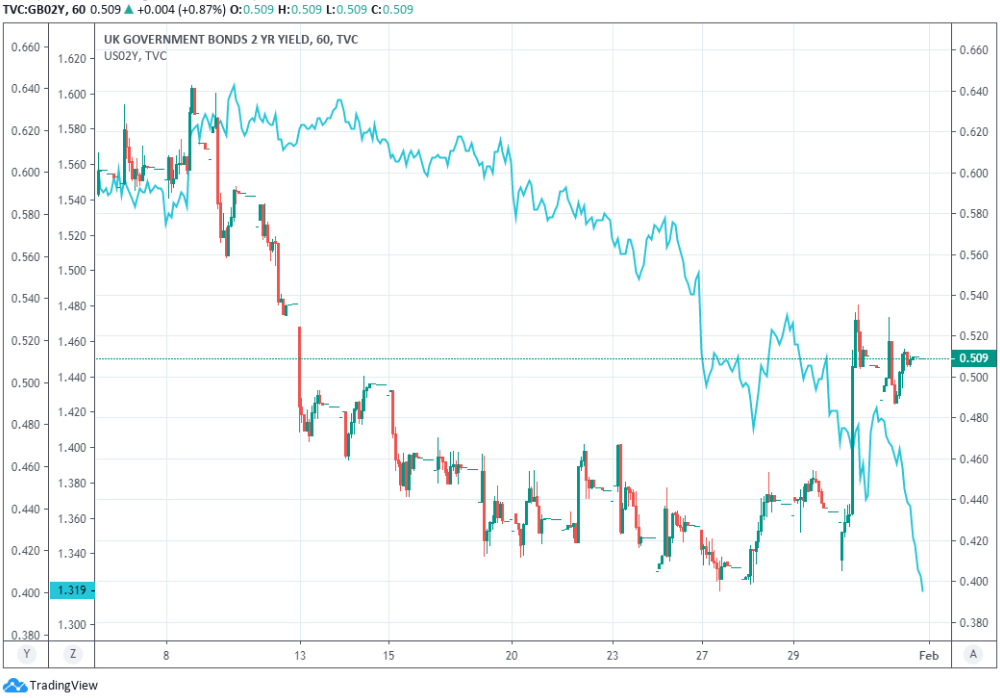 Any catch-up in UK yields could be exacerbated by the possible return of Chinese investors to the market after a week-long New Year holiday. Those investors have not yet had an opportunity to respond to a significant increase in the numbers of infected last week, not to mention the facts that China's economy has all-but ground to a standstill.

Some Chinese cities have turned to ghost towns over the last week and with the virus now in all of China's provinces, there is a chance that a multi-week period of quarantine, or self-isolation, awaits the entire country. That would have significant, unprecedented consequences for the economy.

China's National Health Commission updates with its latest declarations at 02:00 each morning while the UK government updates at 14:00 each day. These, as well as similar announcements from other governments around the world, will be the biggest drivers of markets in the week ahead.

However, the direction of China's Yuan will also be important for both the Euro and Sterling. And so too will the response of global investors to whatever happens in China's stock markets overnight.

Price action could expose a gap between the situation as it's been disclosed by the government, and Chinese peoples' perceptions of it. Proxies for Chinese assets have pointed to between a 6% and 10% fall in major equity benchmarks. A meaningfully larger decline could spook investors the world over. 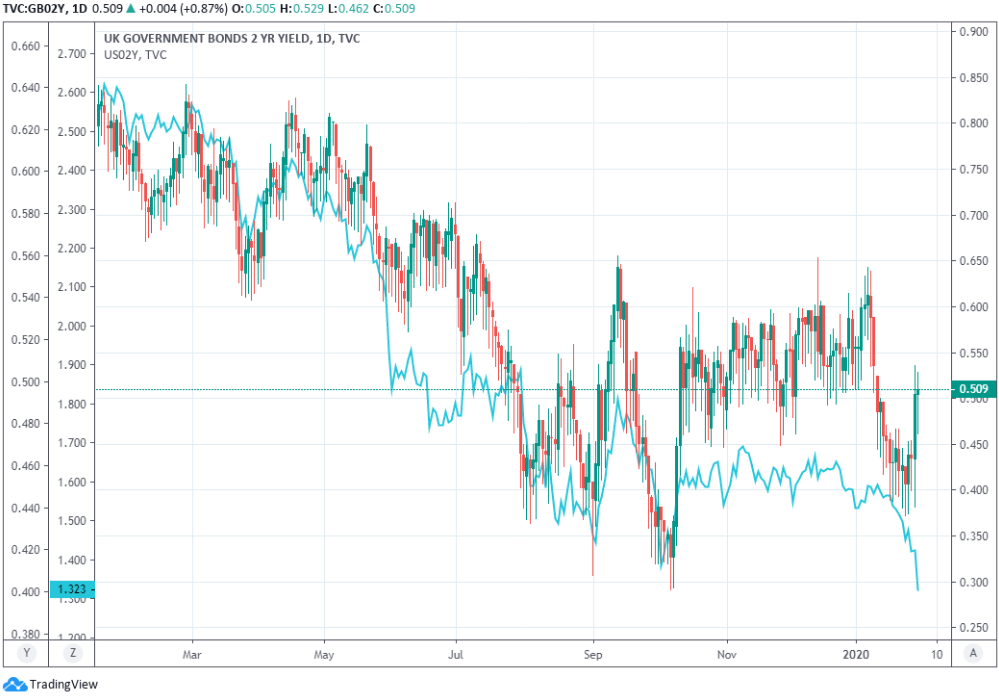 The Euro lagged major rivals throughout last week but was boosted sharply on Friday by a big crash and bang in emerging market currencies, which is something that could go on lifting the single currency in the week ahead.

Last week's newsflow from Europe was largely negative for the currency and especially so on Friday when the Euro made solid gains over the U.S. Dollar that helped constrain the upside in the Pound-to-Euro rate. GDP data from Italy, France and for the broader Eurozone all made for dire reading although that didn't stop the Euro from rising into the weekend, a move that was likely the result of a fierce sell-off in riskier emerging market currencies.

"Macroeconomic fundamental news has taken a back-seat and that might continue next week depending on how the coronavirus risk evolves in the coming days. With large parts of China effectively paralysed this will have global growth consequences, mainly for Asia and Europe," says Derek Halpenny, head of research, global markets EMEA and international securities at MUFG. 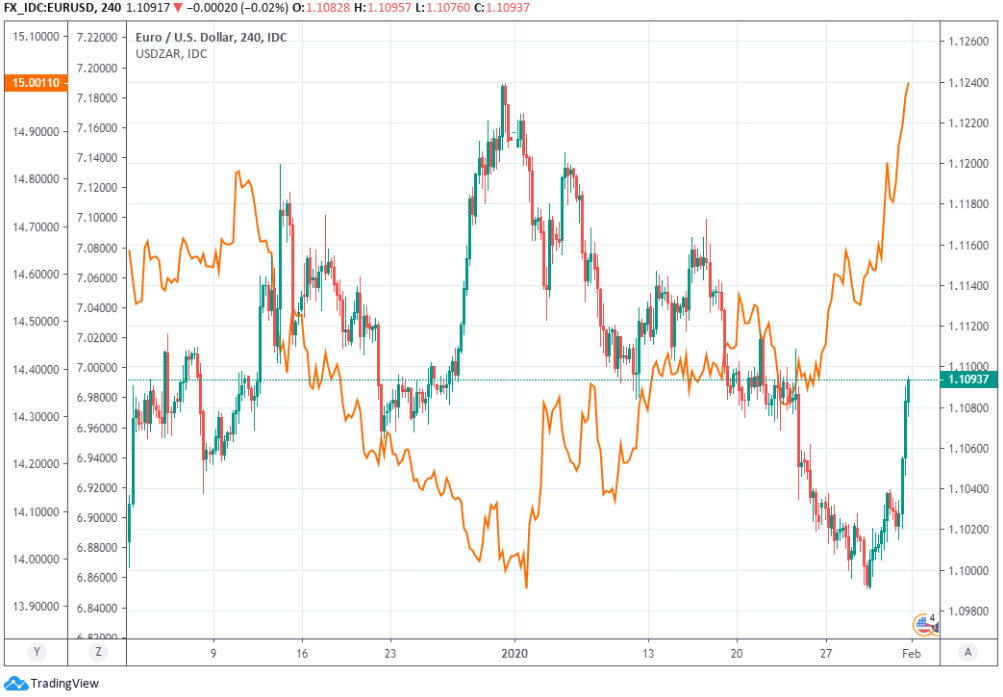 Above: Euro-to-Dollar rate at 4-hour intervals alongside Dollar-Rand rate (orange).

The Euro has become a popular 'funding currency' in recent years, which means it gets borrowed and sold in order to fund bets on higher-yielding emerging markets during the good times, and then bought back during the bad times when those emerging markets are under stress and investors are taking money off the table. Such a function tends to see the Euro-to-Dollar rate benefit temporarily during emerging market weakness.

That likely explains Friday's upward move, which could continue in the new week if China's Yuan weakens and its stock markets plummet overnight as many now expect will happen. However, the Eurozone is arguably the most exposed to an economic slowdown in China once the world's second largest economy's immediate neighbours are taken into account.

"We have decided to revise our CNY calls for Q1 and Q2 to reflect lower domestic and global growth, appetite by officials to sustain a weaker currency given its growing importance in the countercyclical programme, and reduced risk appetite. These are highly susceptible to revision given the progression of the coronavirus and the longevity of containment policies," warns Simon Harvey, an analyst at Monex Europe.

Coronavirus is the only story that matters for currencies and other markets this week, but especially the Euro.