- Break above the July 25 highs would be key

- Pound to be driven by Brexit news; Euro by ECB meeting

Pound Sterling recorded a fourth successive weekly advance against the Euro last week, a run that gives a strong hint that near-term momentum lies with the UK currency. The improvement in Sterling's performance rests largely with the view Parliament has succeeded in delaying the Brexit deadline once more, and that a key European Central Bank event due this week could prove negative for the Euro.

The GBP/EUR exchange rate is trading at 1.1130 at the start of the new week following last week's 0.71% advance, and our technical studies of the charts suggest the trend higher will probably continue.

The 4 hour chart - used to determine the short-term outlook, which means the coming week or next 5 days - shows how the pair has risen pretty steadily from the August 11 lows. Recently it formed a box pattern which it broke out of the top of - as expected - in line with the prior uptrend. 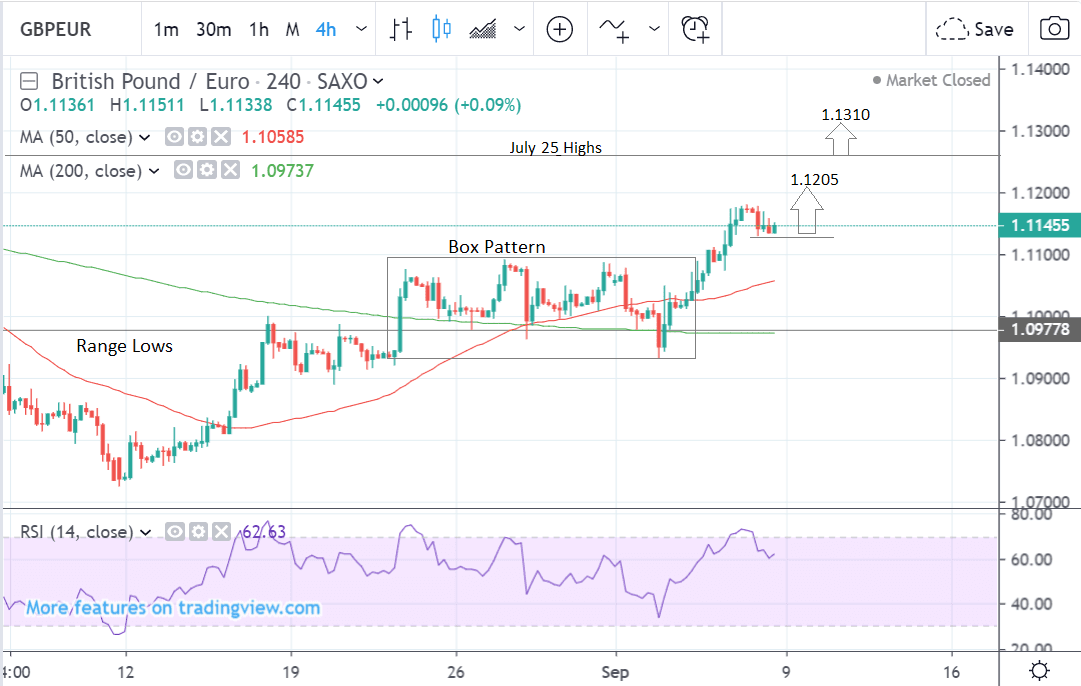 Now the pair will probably continue rising up to the next target at 1.1200-05.

A break above the July 25 high at 1.1255 would be crucial for signalling a continuation higher.

The July 25 high was the last lower-high during the previous downtrend so a break above it would represent the hitting of an important bullish milestone.

Such a break would probably lead to a move up to a target at 1.1310, at the 200-day moving average (MA), which is likely to present a formidable resistance level to further gains.

The daily chart shows how the pair may be forming a ‘measured move’ pattern higher. 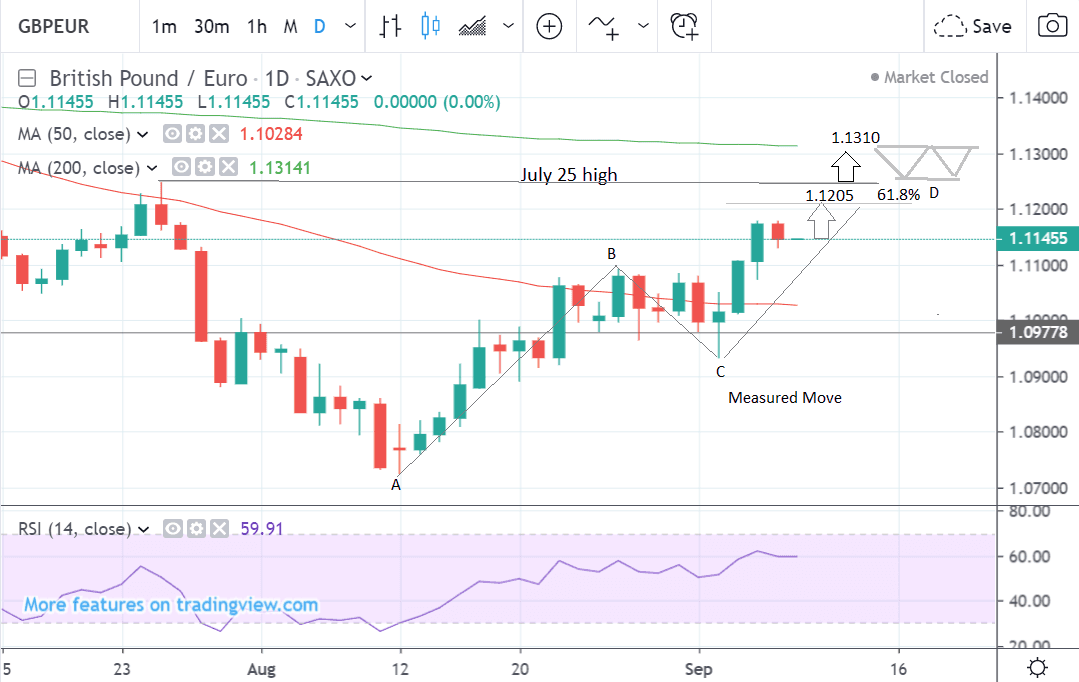 Measured moves are three wave price patterns in which the first and third waves are often of equal length or at a minimum related in length by a Fibonacci ratio of 0.618.

According to this reading, the pair is likely to rise to a target at at least 1.1205, which is the 0.618 Fibonacci ratio of the first wave (labeled A-B).

The Fibonacci ratio, which was discovered by the Italian Mathematician Leonardo Fibonacci in the 12th century, explains proportionately in natural and some man-made forms and financial markets.

A break above the 1.1255 July 25 highs would confirm a continuation higher to a target at around 1.1310 where major resistance kicks in from the 200-day MA, since major MAs are often sources of resistance to trending prices. After that, the pair will probably pull-back and consolidate for a while.

The weekly chart - used to analyse the long-term trend, defined as the next several months of market action - shows the pair having broken properly back inside its long-term range, which is a bullish sign, suggestive of more upside. 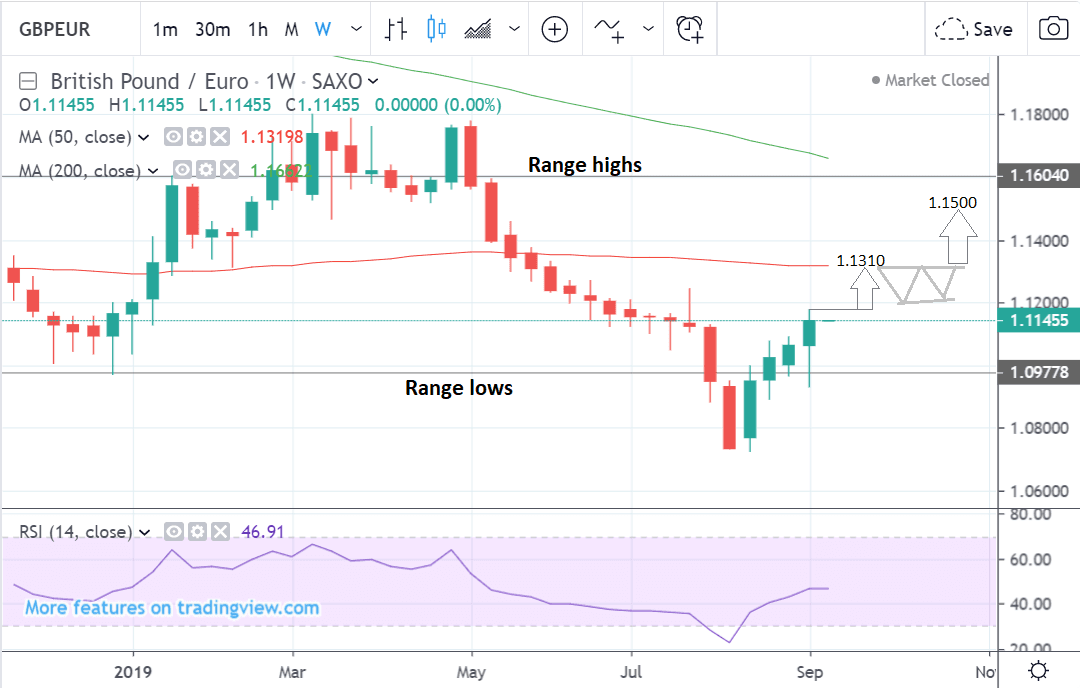 As already shown on the shorter time-frame charts, the pair will probably rise further to a target at 1.1310, and then possibly even higher eventually.

Another bullish sign is that the RSI momentum indicator is at a relatively high level compared to the past. When it was last its current level the exchange rate was much higher in the 1.15s and this is a further bullish sign.

The pair may well revisit the range highs again. A break above 1.1340 -50, for example, would confirm a continuation higher to the next upside target at 1.1500.

The main event for the Euro in the week ahead is the European Central Bank (ECB) policy meeting on Thursday, at 12.45 BST.

The ECB is widely expected to ease policy at the meeting in order to help support the ailing Eurozone economy.

A loosening of monetary policy is generally negative for the Euro as it involves either an increase in liquidity - in the case of QE - which dilutes the currency, or a lowering of interest rates, which lowers net foreign capital inflows.

The main debate amongst investors appears to be about whether the ECB will revive its QE programme and whether they will cut interest rates further.

There has been much talk of a 'shock and awe' police response to the Eurozone's recent economic slowdown: the larger the stimulus, the more likely it will boost growth and raise inflation.

“The European Central Bank communicated its intention to take decisive policy action in September well in advance of Thursday’s meeting, fuelling speculation that it is about to unleash another ‘bazooka’ of monetary stimulus," says Raffi Boyadijian, an investment analyst at broker XM.com.

By this measure, the greater the stimulus, the more likely a decline in the Euro.

Analysts at investment bank Wells Fargo expect an aggressive policy move and the ECB to launch a 45bn QE programme, with a -0.1% cut to both the refinancing and the deposit rate.

“Our expectation is that the ECB will cut rates 10 bps and restart its QE program. Specifically, we expect the ECB to buy €45 billion a month in sovereign bonds for the next 12 months. Recent pushback against restarting QE from some ECB officials, however, makes the second portion of this forecast more uncertain than the first,” says Wells Fargo.

However, there is also a chance the ECB will underwhelms, a scenario that would aid Euro gains.

A number of ECB Governing Council members have expressed scepticism this would be a good idea and the GC appears split over the matter.

If QE - also known as the Asset Purchase Programme - is not expanded it might actually lift the Euro marginally as the general expectation is that they will press the button and begin between 15-45bn Euros of asset purchases a month.

If the ECB opts to restart QE they will also almost certainly cut interest rates.

QE tends to depress long-term rates which leads to a flatter yield curve, and that is bad for banks. In order to avoid negative side effects, the ECB will also need to cut short-term rates by cutting its refinancing or lending rate and deposit rate too. These currently stand at 0.0% and -0.4% respectively.

A cut in the deposit rate is probably already priced in by markets.

If the ECB does nothing the Euro will probably make a strong recovery. Much depends on the language of the statement and whether it hints at the likelihood of further cuts or not.

"There’s a risk markets may have gotten ahead of themselves as remarks by ECB officials in recent days have cast doubt on the likelihood of a fresh round of asset purchases,” says Boyadijian. “Should the Bank deliver only a rate cut (a 10-basis points reduction in the deposit rate is almost certain), the decision could be met with disappointment, triggering a sell-off in European stocks while boosting the Euro."

Boyadijian adds that if the ECB’s announcement falls short of expectations, its forward guidance will be just as important, and the market fallout could be minimised if policymakers leave the door open for quantitative easing in the future.