- Peaks and troughs have rotated and 2-bar reversal showing

- Pound to be driven by Brexit news; Euro by PMIs

The GBP/EUR exchange rate will be trading at around 1.0965 at the start of the new week after rising a solid 2.00% in the week prior and studies of the charts suggest there is mounting evidence to support a reversal in the short-term, however, longer-term this is debatable.

The 4-hour chart - used to determine the short-term outlook, which means the coming week or next 5 days - shows how the pair has spent all of the last week recovering from the August 11 lows at 1.0733. 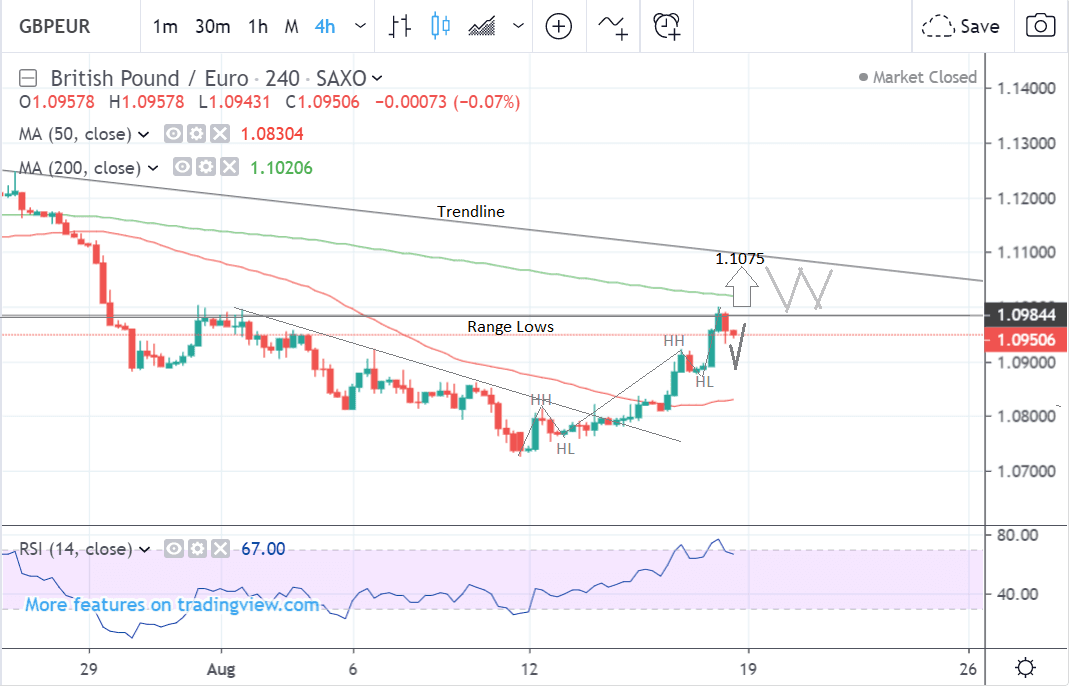 Peaks and troughs on the 4 hour chart have rotated: the pair has completed 2 sets of higher highs (HH) and lower highs (LH) which is one of the first signs of a reversal in the trend.

It has now reached a key resistance level at the former range floor where it may pull-back or find further upside more difficult.

A break above 1.1015 would be required to confirm more upside to a target at 1.1075, at the level of a downsloping trendline and the 50-day moving average (MA). These combined will probably attract supply as technical traders step in to trade the expected pull-back.

The daily chart shows how a break above the trendline could lead to a possible eventual medium-term upside target at 1.1440 and the July high. 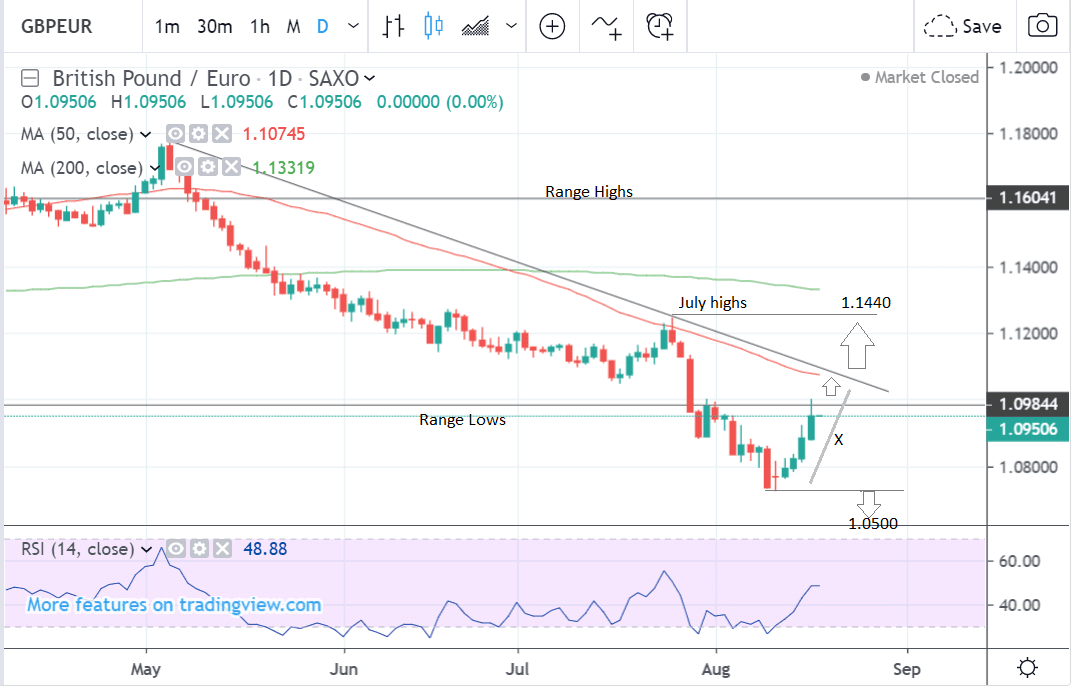 The target is calculated by taking the height of the move immediately preceding the trendline, labeled ‘X’, and extrapolating it higher. Normally the market will move at least a ratio of 0.618 of X, which is the ‘golden’ or ‘Fibonacci’ ratio.

For confirmation of such a move we would ideally want to see a break above the trendline on a closing basis, or a break on a non-closing above around 1.1125.

The daily chart is used for an analysis of the medium-term outlook, which includes the next week to a month. 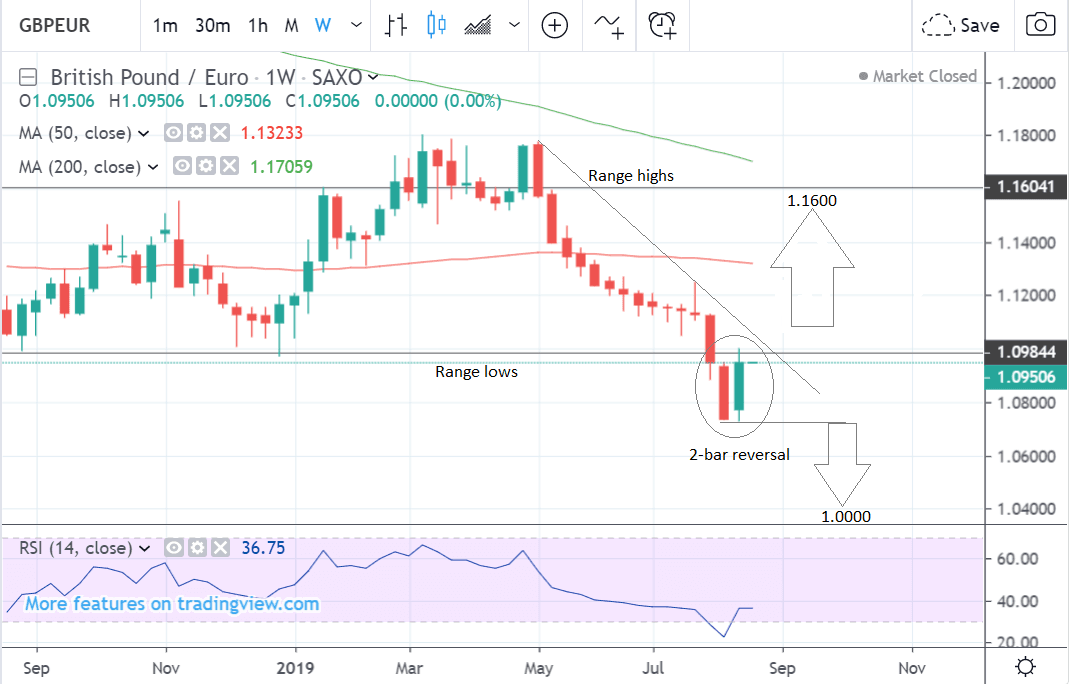 The weekly chart - used to analyse the long-term trend, defined as the next several months of market action - shows how the past week's recovery may constitute a potential game-changer for the exchange rate.

This is because it formed what is known as a 2-bar reversal pattern. These patterns form when a long red down bar is followed by a long green up bar which more or less reverses all the previous period’s losses. They suggest the downtrend may have ended.

Another bullish sign is that the RSI momentum indicator has just exited the oversold region giving a ‘buy’ signal as on the daily chart.

Yet the downtrend is also fully intact and this creates an underlying bias to more downside.

A break below 1.0733 lows would help confirm more downside to 1.000 (parity) over the long term, given a persistent trend lower would probably only come about as a result of a ‘no-deal’ Brexit, which would be catastrophic for Sterling.

The Pound this Week: Politics to Dominate

The main driver of the Pound in the week ahead is likely to be Brexit news.

Currently, the country remains on course for a ‘no-deal’ Brexit on October 31 unless Parliament successfully finds means to instruct the government to request an extension.

There is also a heightened prospect that the Government of Boris Johnson is brought down in a confidence vote.

Talk of a cross-party administration replacing the current government aided a rebound in Sterling last week as it lowered the odds of a 'no deal' Brexit transpiring.

"Political efforts to prevent a no‑deal Brexit on 31 October have been supporting GBP over the last week. The Labour Party leader, Jeremy Corbyn, is trying to convince other opposition parties and rebel Conservative MPs, to form a caretaker government. The aim would be to call a General Election and avoid crashing out of the EU on 31 October without a deal. PM Johnson’s Government is expected to face a vote of no confidence early after Parliament returns from recess on 3 September," says Kim Mundy, a strategist with CBA.

This week we will be looking for further developments on this front, and if it becomes clear there is the prospect for such an administration succeeding we might see further advances in Sterling.

"The sharp depreciation of the British Pound against the Euro in recent weeks has undoubtedly attracted some bargain hunters. However, we expect the usual political mayhem to continue after the summer recess," says Marc-André Fongern, analyst at MAF Global Forex. "The currency is likely to remain particularly vulnerable in the coming weeks as Boris Johnson has repeatedly stressed that Britain might leave the EU without a deal. Boris will be forced to compromise, no doubt about it."

The prospect of a 'care-taker' government replacing the current regime are however slim, as the various parties are splintered in their vision of how such a regime would be run, and what its objectives would be.

Beyond Brexit, other market-moving data could come in the form of commentary from the G7 which is being held between 24-26 of August and which Boris Johnson will attend. The 45th G7 summit will be held in Biarritz, France.

On the data front, the calendar is very light with only CBI Industrial Trends Orders for August. CBI data is considered an invaluable leading indicator for broader growth trends so analysts will still be watching it carefully for signs of whether the -0.2% fall in growth registered in Q2 are likely to extend.

The most important releases for the Euro in the week ahead are preliminary PMIs, or economic activity and sentiment gauges for August, as well as the release of the minutes of the European Central Bank’s (ECB) July policy meeting. 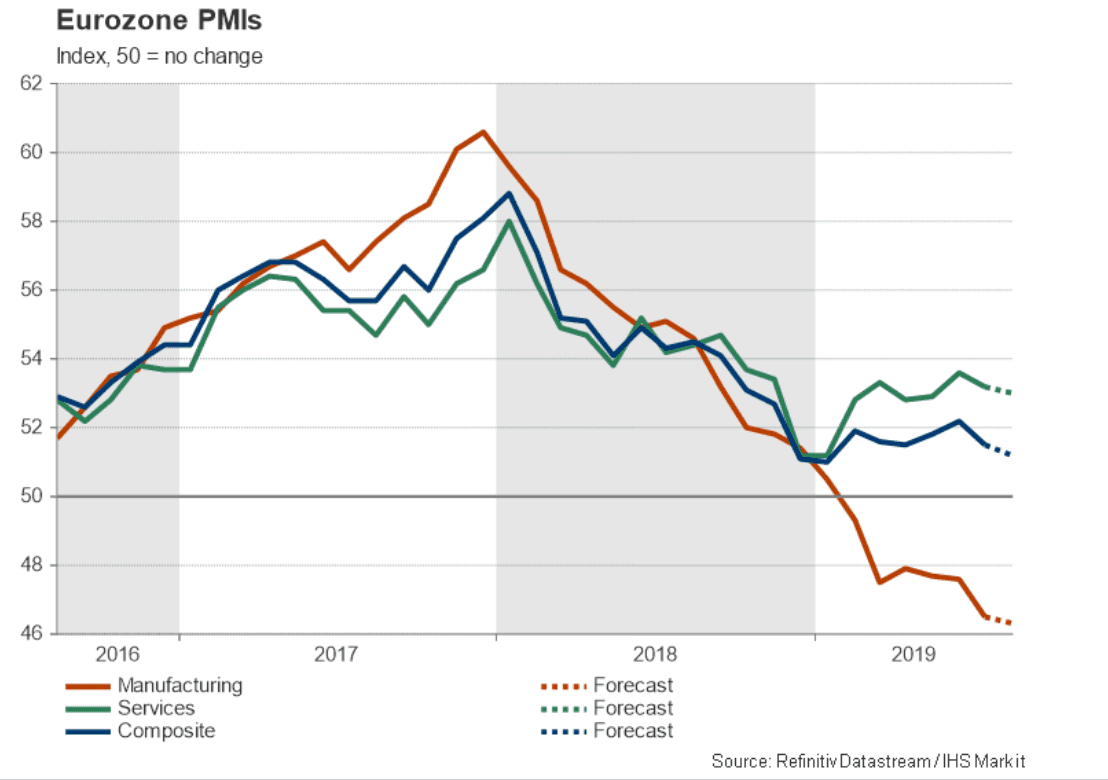 “Flash PMI readings for July are expected to show the Eurozone economy is stuck in the doldrums and is in urgent need of more stimulus. The IHS Markit report is anticipated to show growth in Eurozone economic activity moderating further in August, with the composite PMI forecast to have fallen 0.3 points to 51.2.” Says Raffi Boyadajian, an investment analyst at FX broker XM.com.

The minutes of the meeting of the members of the ECB is likely to gain more than the usual attention as analysts scrutinize the conversations between policymakers for signs of the amount and type of stimulus they may be considering to launch in September, when many economists expect an ECB bazooka to attempt to restore growth in the region.

The minutes of the ECB meeting are scheduled for release at 12.30 BST on Thursday.