- The pair is showing some short-term bullish signs

The Pound-to-Euro exchange rate is trading at around 1.0811 following a more stable mid-week session, which is about 0.67% higher than the 1.0733 lows plumbed at the end of last week.

The question now on trader’s minds is can this recovery continue or is the pair fated to relapse and start going down again?

Studies of the charts suggest it’s still too early to call a reversal and the dominant bear trend remains intact. That said, a strong close today (Wednesday) would start to shift the bias to the upside in the short-term.

The 4 hour chart - used to determine the outlook for the next week or 5 trading days - shows how the pair has mounted a relatively robust recovery since basing at the August 9 low . 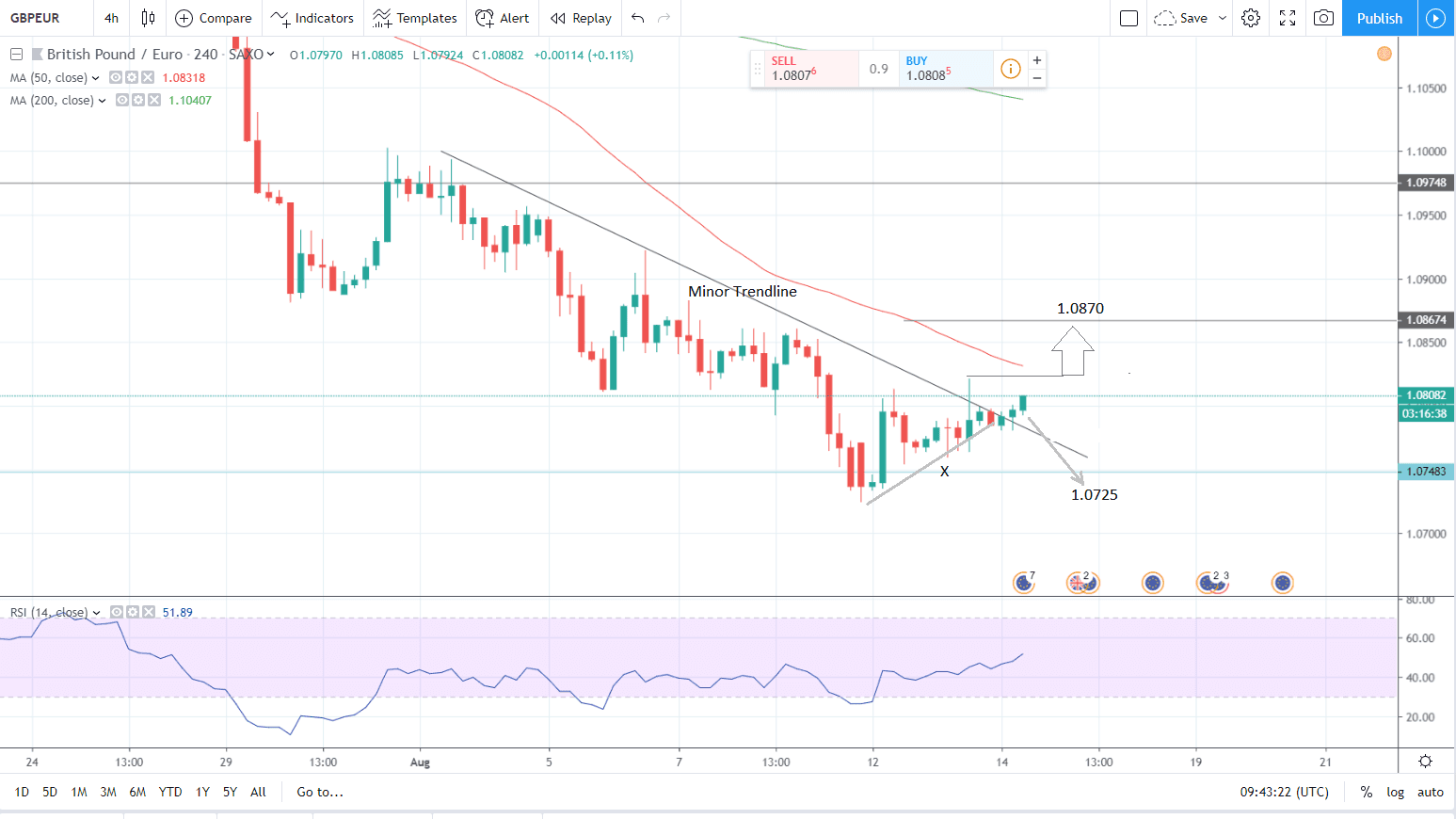 The market has rallied through the slanting minor trendline which had been capping recoveries at around 1.0750, and broken above it on a closing basis, which suggests a more bullish outlook in the short-term.

The break above the trendline suggests a probable follow-through higher, but the question is how much?

The usual way to forecast a trendline breakout is to extrapolate the price action immediately prior to the trendline, the height of which is labeled ‘X’ on the chart above. This indicates a follow-through to a target at around 1.0870.

In this respect, a break above the 1.0822 spike highs would further enhance the probabilities of a continuation higher.

Given the overarching downtrend, the alternative - a bearish capitulation - is also still a risk, and would take the pair back down to the 1.0735 lows.

On the daily chart, the most significant thing to note is how the pair is still rising on day 3 after it made a new low on August 9 (rectangled in green). 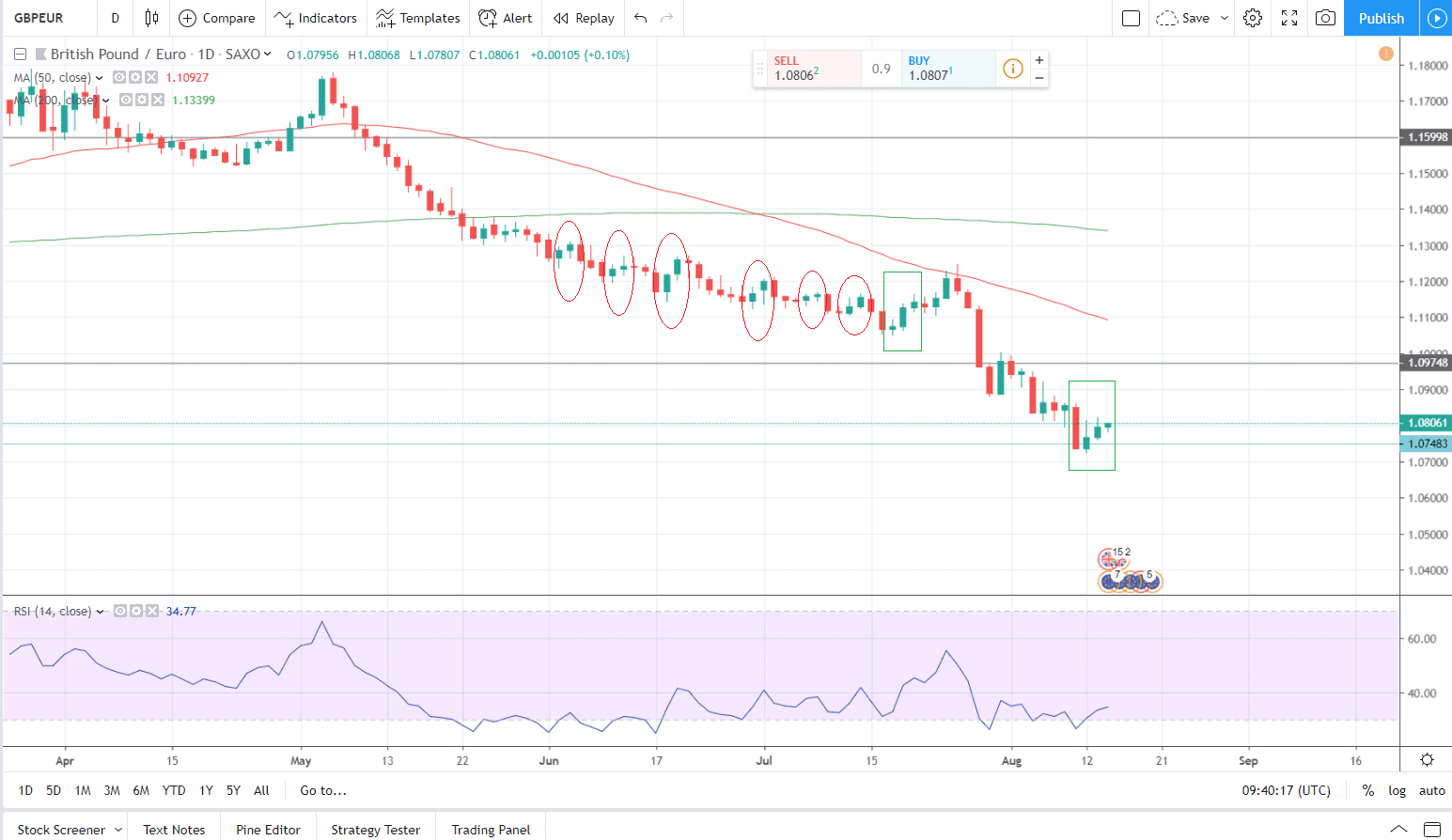 Normally, markets start falling after a 2-day recovery - in fact, there is a marked propensity for markets to recapitulate after 2 up days long pull-back, with a 60% chance that on day 3 they will start going down again. Note the multiple occasions when this has happened circled in red on the chart above in the current downtrend.

Yet this has not happened this time so far and assuming the market can close positively today (Wednesday) there is a heightened chance the pair may go substantially higher.

For, on occasions when the market rises for 3 consecutive up days during a downtrend, the probabilities switch in favour of a continuation of the correction even higher.

These occasions are rare - there is only one other, highlighted in a green rectangle on the chart above which occurred on July 17, 18 and 19 - but when they happen they are generally a bullish sign and lead to a small continuation higher.

Three up days in a row would not be enough to signal a complete change in trend, however, as the overarching downtrend remains intact. They would merely suggest a continuation of the correction higher for a bit longer. More downside would still be expected eventually given the intact downtrend.

The daily chart is used to analyse the outlook in the medium-term which is defined as the next week to month ahead.

The weekly chart - used to analyse the long-term trend, defined as the next several months of market action - shows how the pair made its low last week on a major historical low, at the August 2017 lows, and has since started going higher again. 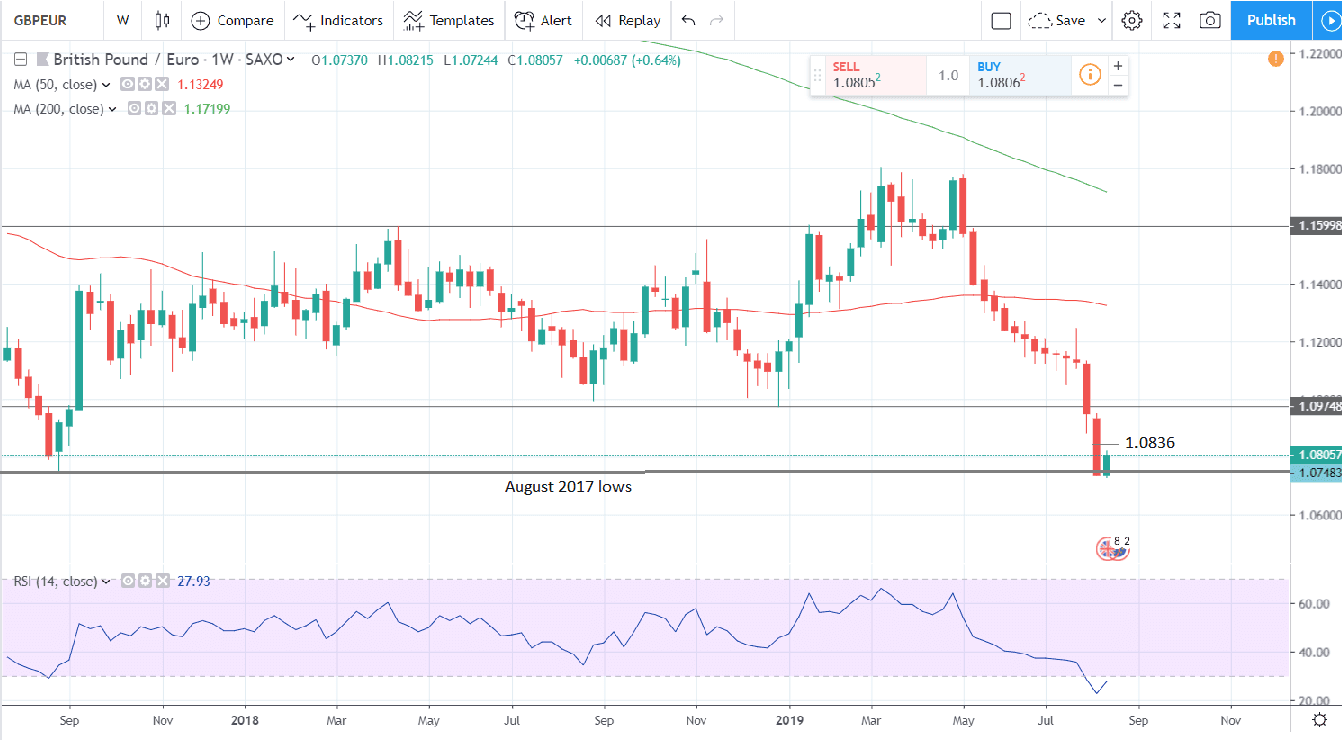 The main level to watch on the weekly chart is 1.0836 which is the midpoint of the long down bar of the previous week’s sell-off.

If the price can close above the midpoint of the down-bar it will be a much stronger sign of a reversal and recovery higher, as it will set up the possibility that the market may be in the process of forming a ‘piercing line’ Japanese candlestick pattern on the weekly chart, which is a sign of a bullish reversal.

Such a close would further solidify the case for a reversal in the trend. A failure, on the other hand, would keep the advantage with the bears in the long-term.

The oversold RSI momentum indicator in the lower pane is a further sign the market may have bottomed but on its own is not enough to suggest a reversal. If it breaks out of the oversold zone and the exchange rate closes above the midpoint the two signals combined would enhance each other.