Pound Sterling has fallen for seven consecutive days, one of its longest losing streaks in months as pessimism over the state of cross-party Brexit talks combines with global trade war fears, however there is evidence that suggests the selling pressures might soon fade.

This evidence is technical in nature and based on the content of news reports overnight that suggest a big date has been put into the Brexit calendar for another vote on the Brexit deal which should see traders turn focus to the next potentially explosive development in the long-running Brexit saga.

The declines are however likely to fade as the exchange rate has now fallen to a key area of support that has been in place since February which should prove difficult to break on a sustainable basis.

The Pound has not closed below €1.15 since mid-February, and has not traded below 1.1459 on an intra-day basis since February 22, which tells us that there might be solid buying interest in the currency around here. 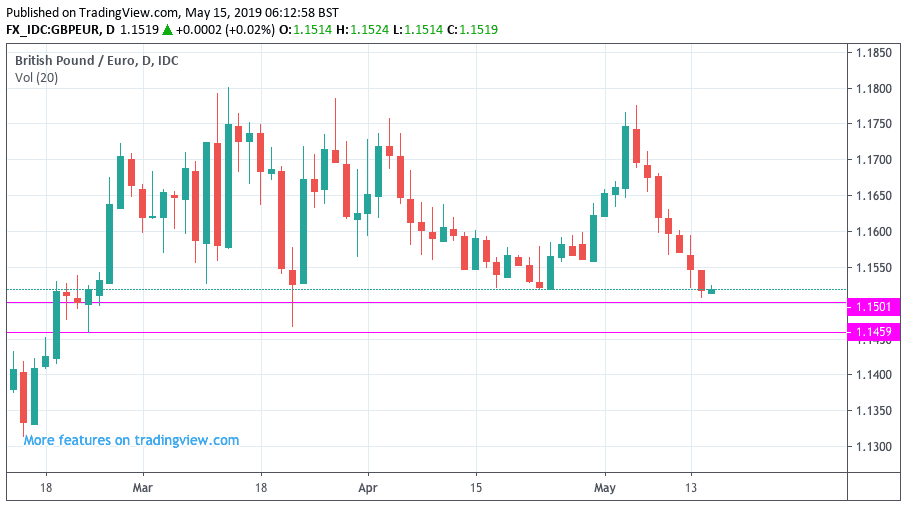 Therefore, the current move lower will likely be tested over coming days and hours, and if the exchange rate can keep its head above water by closing above 1.15 then the support level will hold.

Robin Wilkin, a strategist with Lloyds Bank says the momentum behind the recent move lower in GBP/EUR does now appear to be at "extreme levels and warning of a reversal."

Yet, the Euro continues to "grind higher" against the Pound, notes Wilkin.

Nevertheless, the analyst notes the exchange rate has reached the significant support region he identifies as lying "roughly between" 1.1494 and 1.0989. As a result of the strong support this region offers Sterling, Wilkin is "very cautious" on expecting more substantive moves lower in the Pound against the Euro at this juncture.

This kind of market analysis is by no means exact, but the message is to those watching Sterling against the Euro is that we could see the recent sell-off slow and potentially even reverse to some extent.

While we don't see a substantial recovery in the Pound occurring in the current political environment, the prospect of some sideways oriented consolidation is possible.

There is reason to believe markets might now opt to sit on the sidelines when it comes to Sterling: They have a new date in the Brexit calendar to aim for.

Prime Minister Theresa May has challenged Jeremy Corbyn to make up his mind on whether to back a cross-party compromise deal, as she seeks to bring the Brexit deal back to the House of Commons for another vote in June.

The vote is not only likely to be the verdict on the deal negotiated between the UK and EU over the past two years, but will potentially mark the end of the May era as failure to pass the Withdrawal Agreement Bill would mean she would have to oversee a new session of Parliament, which she would unlikely secure.

May told Corbyn at a meeting on Tuesday night that the Government intends to bring forward legislation to ratify a revised Brexit deal on June 4 or June 5.

In talks lasting about an hour on Tuesday night, the prime minister said the government would propose a close customs arrangement with the EU and uphold workers’ rights and environmental protections, meeting some of Labour’s demands.

Thus far Labour have been unwilling to back a cross-party deal, saying the Government has not offered enough concessions.

It appears that the Government is now willing to set a deadline and therefore the market could well enter a wait-and-see approach in the run-up to the vote.

We believe should Labour and the Government announce a deal before this cut-off, the Pound could rally.

However the real test for the currency would be the passing of a Brexit deal put before the House on June 4/5.

We suspect that the numbers are simply not there with large elements of the Labour and Conservative parties resorting to entrenched positions on Brexit, even if their leaders are more conciliatory.

"Investors have become comfortable this year with the notion that there is a blocking majority in parliament to prevent a no-deal Brexit. Investors we suspect would need to revisit this assumption and to re-price the probability of this negative tail for GBP should upcoming events push the Conservative Party in a more hawkish direction," says Paul Meggyesi, an analyst with JP Morgan.