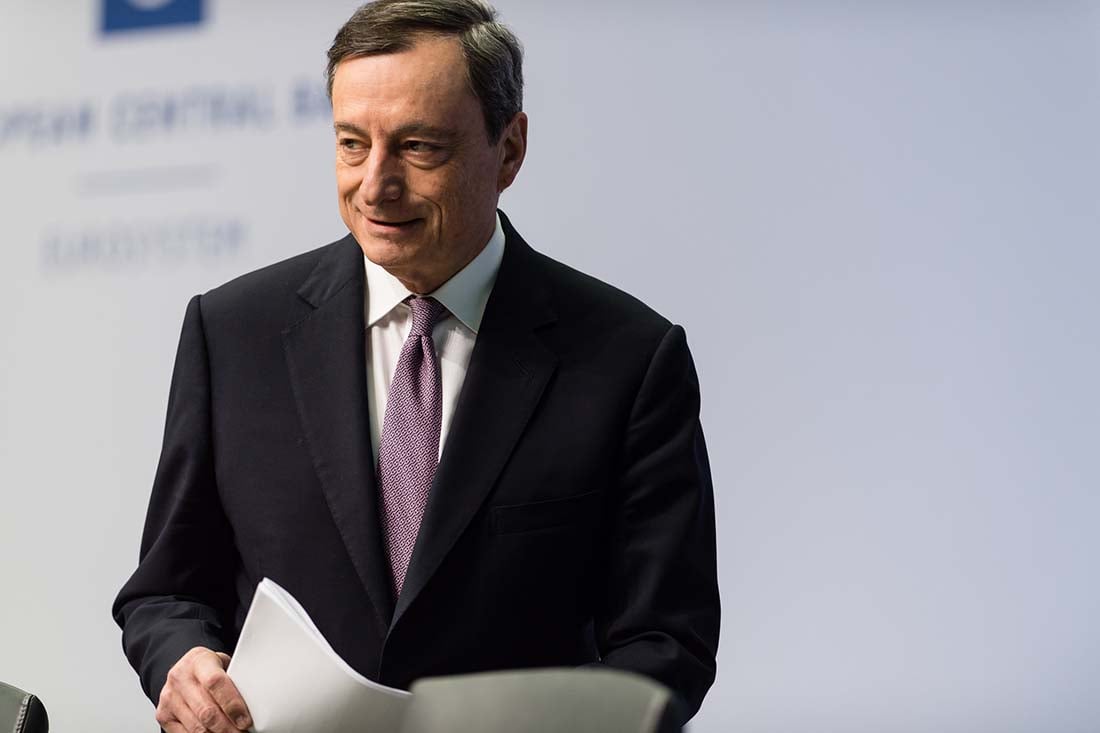 The Euro has fallen in response to the latest communication from the European Central Bank who say risks to the Eurozone economy are "moving to the downside" while issuing a set of downgraded growth and inflation forecasts for 2019.

As planned, the ECB confirmed they are to end their quantitative easing programme this month, while maintaining interest rates will remain unchanged until at least the end of summer 2019.

Today's economic forecasts and guidance on the steps which will be taken in 2019 and 2020 to keep the Eurozone economy stimulated will heavily influence the direction of the Euro over coming months.

- Below, the Euro is the day's worst performing currency in the wake of Draghi's comment's on the outlook for the Eurozone economy:

- The ECB maintains it will keep interest rates unchanged at least through the summer of 2019. 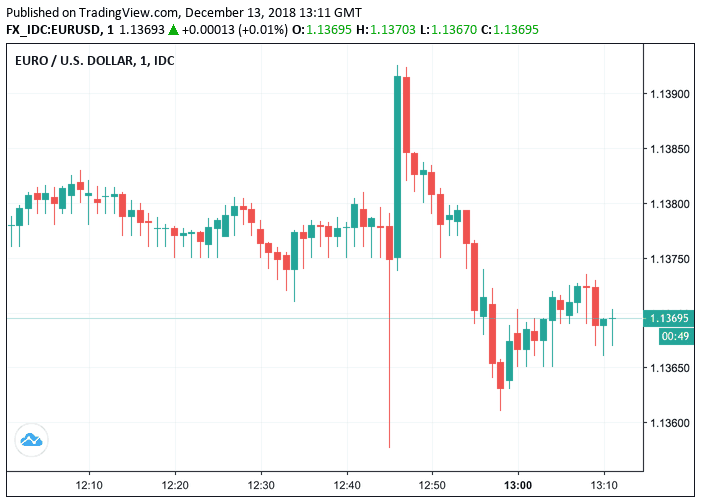 Press Conference, What Draghi said that Hurt the Euro:

Concerning the outlook, Draghi says in the press conference that risks to the Eurozone economy are "moving to the downside," comments which appear to have hurt the single currency.

Florian Hense, an Economist with German bank Berenberg says, "despite keeping its calm, the ECB is turning more cautious," noting the ECB revised down the short-term projections for GDP growth, acknowledged the increased “great uncertainty” and that the balance of risks to the economic outlook was “moving to the downside”.

"The ECB will maintain an accommodative monetary stance via a sizeable stock of assets, planned reinvestments and low interest rates possibly for a little longer than so far expected," says Hense. Markets are also catching on the idea that stimulus will last a little longer than expected, hence the Euro's reaction.

The ECB maintains that it stands ready to adjust all instruments as appropriate in response to any unforseen slowdown in the economy.

Underlying inflation is tipped to remain muted, and to decrease over coming months.

Not a surprise but still a great achievement and to some, even historic. The ECB just announced, or better confirmed, the end of its net asset purchasing programme (QE). What looks like pure boredom is, in fact, the result of masterly communication, setting itself on auto-pilot and preparing financial markets." - Carsten Brzeski, Chief Economist ING Germany.

While Mario Draghi was boxed in by previous announcements about QE, his press conference revealed two stark truths – he remains deeply concerned at the fragility of Eurozone growth and reserves the right to administer further monetary stimulus. Against a bleak backdrop of stalling German exports, wounded leaders in the Eurozone’s two largest economies and Italy’s simmering feud with the EU, Britain’s Brexit chaos almost looks a sideshow." - JR Zhou, Infinox.

We expect the ECB to nudge its key interest rates gently higher in late-2019 and we look for the broad value of the USD to turn lower, driving EURUSD to 1.22 at the 12M horizon." - Stephen Gallo, European Head of FX Strategy at BMO Capital Markets.

The Euro was treading water Thursday ahead of the latest European Central Bank (ECB) interest rate decision and monetary policy statement, which could be key to the direction of the single currency into year-end and beyond.

Consensus is firmly in favour of the idea the ECB will leave its main refinancing rate, marginal lending rate and deposit rate at 0%, 0.25% and -0.4% respectively for December, so markets will take cues from guidance around quantitative easing and future possible policy moves.

The decision as well as its accompanying statement will be released at 12:45 London time, and those will be followed by a press conference at 13:30.

Guidance until this point has suggested interest rates will rise once "through the summer of 2019" and the quantitative easing programme, which has seen it stimulate the Eurozone economy by hoovering European government bonds and forcing down yields in the process, will end this month.

But there is now a small amount of uncertainty over both of those ambitions following a steep fall in Eurozone growth during the third-quarter and another decline in inflation that have since placed the ECB's consumer price forecasts and its policy outlook in jeopardy. Markets will be looking for reassurance this Thursday.

"FX markets are displaying a mild risk-on tone heading into the ECB’s last rate decision of 2018," says Stephen Gallo, European head of FX strategy at BMO Capital Markets. "Our narrative heading into this decision is that ECB dovishness which ultimately throws a bone to risk appetite should eventually provide support to the EUR... That leaves the size of the kneejerk move lower in the EUR as a result of that dovishness one of the key issues for today."

Gallo and the BMO team say the Euro's losses Thursday should be limited so long as the bank does not go for the nuclear option of extending its quantitative easing programme for another three-to-six months. And that eventually the single currency should recover.

Ultimately the ECB's message will be determined by what recent economic data means for its inflation forecasts and also by political considerations, such as the large amount of Italian bonds held on its balance sheet and the Mediterranean nation's rebellious approach toward EU fiscal rules.

Eurozone inflation has risen above the target of "close to but below 2%" this year thanks largely to previous increases in the oil price but the core inflation rate, which refers to the consumer price pressures left over after energy and food items are removed from the goods basket, has actually fallen.

As a result, the European Central Bank has not made any real progress toward its inflation target, in underlying terms at least, over the last two years.

"We may see some very modest downward revision to growth and inflation forecasts. Yet as long as this is modest it is unlikely to lead to a change of the ECB forward guidance on the depo rate path and the reinvestment horizon of at least one year, any spill over into EUR should be fairly limited," says Petr Krpata, a strategist at ING Group.

Krpata says that if the ECB was to downgrade its GDP forecasts to anything less than 1.6% for any of the coming two or three years it would signal to the ING team the bank is becoming more "dovish", which would be negative for the continental policy outlook and for the Euro.