- LMAX Exchange optimistic a Brexit deal will get done

Bet on the British Pound in 2019 is the message from a leading foreign exchange strategist who says a number of factors will align to ensure the Pound-to-Euro exchange rate moves higher during the course of the year.

“One of our favourite currency plays looking out into 2019 is swapping Euros for Pounds," says Joel Kruger, a foreign exchange strategist with LMAX Exchange.

At present the GBP/EUR exchange rate is seen consolidating in a range between 1.1461 and 1.1312 having risen from a low just below 1.10 suffered in August. The gains come as markets become increasingly confident the E.U. and U.K. will strike a Brexit deal before the year is out and a disruptive 'no deal' scenario is avoided.

"We remain optimistic a Brexit deal will get done, leaving plenty of room for relative outperformance in the Pound," says Kruger. 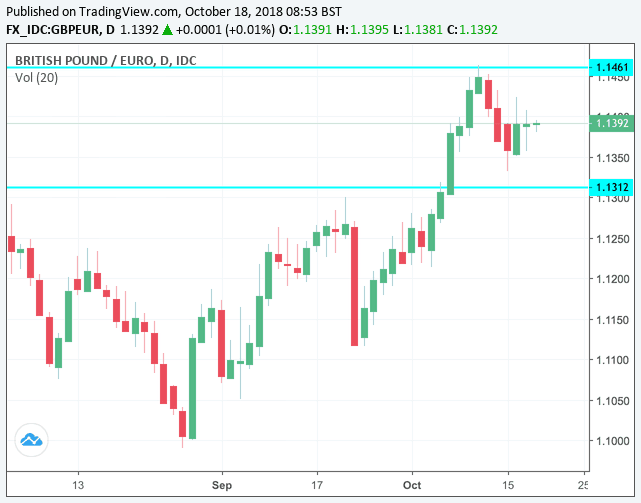 Above: Sterling consolidating vs. the Euro short-term.

The strategist says support for the British Pound will ultimately be provided by the U.K.'s ongoing robust economic performance, something that markets can focus on fully once Brexit anxiety fades: "fundamentally, growth and wages are picking up in the UK."

Kruger's observation comes in a week that official figures show U.K. wage growth had risen to a ten-year high with average earnings, excluding bonuses, delivering 3.1% growth, ahead of a previous reading of 2.9% and a consensus forecast for 2.9%. 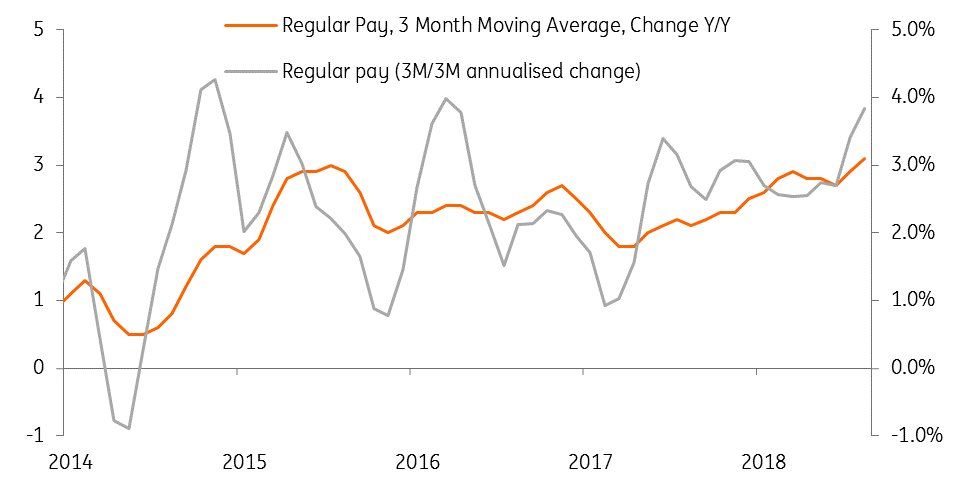 Rising wages suggest the economy has reached full employment; there is simply no longer the pool of free labour available to fill job openings that there once were, hence companies are having to offer higher wages to attract talent. Indeed, the ONS also reports job vacancies are running at record highs.

Rising wages tends to put upside pressure on inflation, which is typically matched by higher interest rates at the Bank of England, something designed to act as a dampener on raising wages.

Rising U.K. interest rates in turn attract foreign investor capital owing to the improved returns on investment being offered which in turn bids up the value of Sterling.

The Bank of England is forecast to raise interest rates once in 2019, but should a Brexit deal be agreed and wages continue to rise a second interest rate could be announced which would likely aid Sterling.

With Brexit angst out of the way, a Bank of England raising interest rates will contrast favourably for Sterling with a European Central Bank that is seen standing pat on interest rates for some time yet.

"I believe a drop in EUR/GBP to 0.7800-0.8000 is realistic over the next 6 months. I think in this scenario, beyond the Sterling positives from a deal getting done, there is also the added yield differential advantage that comes into play given the ECB's commitment to not even consider a rate hike until summer 2019," says Kruger.

Currently consensus estimates made by 48 of the world's leading financial institutions suggest the Pound is currently trading above where it will be in three and six months time against the Euro. For a look at these estimates, as well as the targets set out by HSBC, Goldman Sachs, J.P. Morgan and more, please see Horizon Currency's free report.

A 'No Deal' Presents Downside, but Losses to be Contained

Analysts are in agreement that Brexit presents a binary outcome for Sterling: gains if a deal is agreed, declines if a 'no deal' scenario materialises.

Where does Kruger see Sterling-Euro going in the event of a 'no deal'?

Interestingly, the Euro is expected to also suffer.

"At the same time, would also pose downside risk to the E.U. economy that has yet to be priced into the market," says Kruger. "So even in this scenario, while an quick jump back towards 0.9500 would be possible, I think there will still be good demand for Sterling...i.e. selling interest in EUR/GBP into 0.9500 area."

Technical Arguments for a Stronger Pound

Fundamentals aside, Kruger also says there is a technical argument to be made in favour of the Pound pushing higher against the Euro in 2019.

"On a technical basis, the Euro-Sterling exchange rate looks like it could be in the process of rolling over from longer-term cyclical highs," says Kruger, referencing the inverse of GBP/EUR.

The view that the Euro is in the process of rolling over from a long-term high against the Pound is shared elsewhere.

Technical analysts at Lloyds Bank say long-term they cannot rule out a retest of the 2008 highs at 0.9802. "However, the risks of that decrease the longer we remain within this medium-term range under 0.9300-0.9710," says Robin Wilkin, a strategist with Lloyds Bank's commercial banking division. 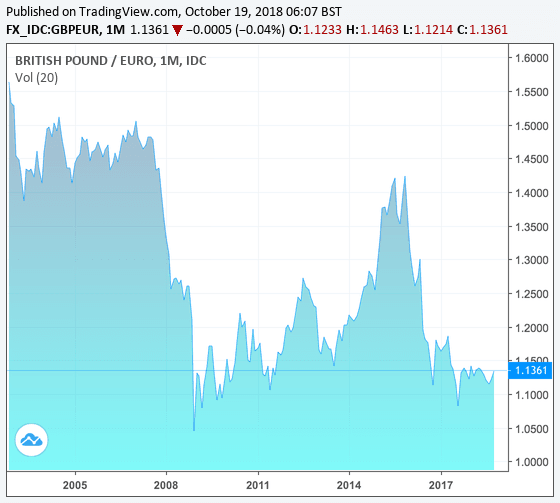 But, the trigger to expect the longer-term rebound would be a move above 1.2121 key resistance which would open up the door to a rally back towards 1.25 and then 1.33. 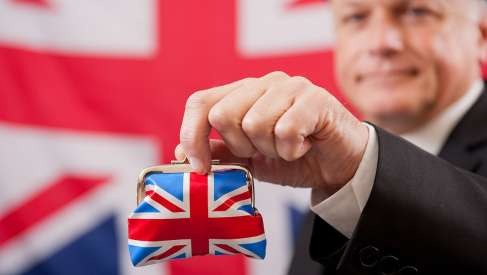