Scotland will need to enact significant austerity measures were it to exit the United Kingdom after a second independence referendum argue analysts.

Economists are once again studying the potential implications of Scotland going independent a mere three years after the previous exercise which saw a majority of Scots opt to remain in the United Kingdom.

The Scottish National Party believe their dream of an independent Scotland will be realised a second time around and party leader Nicola Sturgeon says she would like another referendum on Scottish independence held as early as 2018.

Economic opinion was near universal during the last referendum - independence would be costly for Scotland - and the same will apply for round 2 argues BofA economist Robert Wood in a note released March 17.

Scottish Economic Share of UK Economy Shrinks Ahead of IndeyRef2

As we head to a second independence referendum Wood points out that Scotland has historically accounted for 9-9.5% of UK GDP, “though that share has fallen recently as the Scottish economy has underperformed the wider UK.”

One of the reasons for the recent underperformance of the Scottish economy has been falling oil revenues. 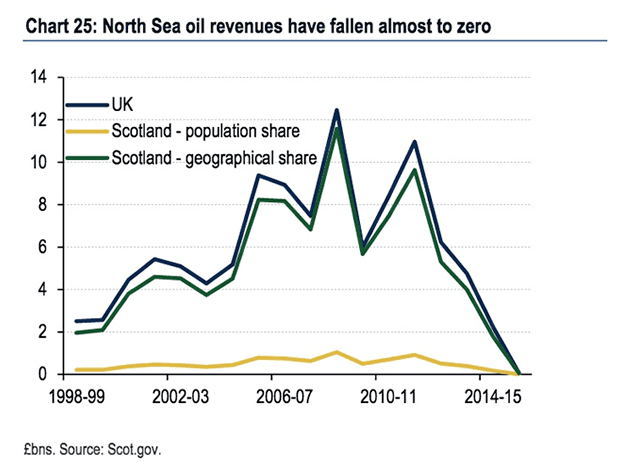 Bank of America suggest these receipts could improve given the rebound in oil prices through 2016 but they are unlikely to reach previous heights towards $100 in some previous years.

The fall in oil tax revenues shows up in a considerably worse Scottish government budget deficit relative to the UK overall. 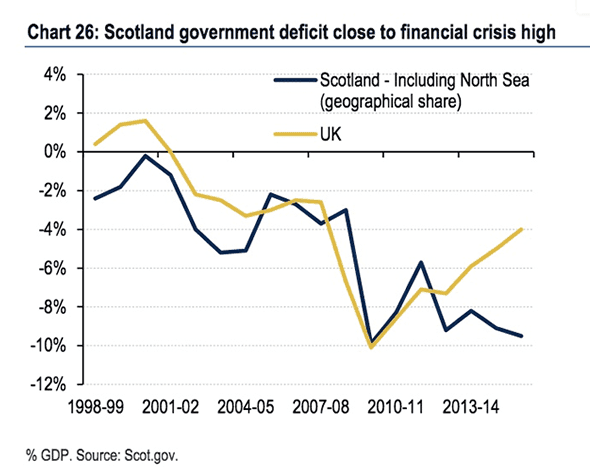 Public sector revenue was estimated as £53.7 billion, or 7.9% of total UK revenue.

Total expenditure for the benefit of Scotland by the Scottish Government, UK Government, and all other parts of the public sector was £68.6 billion.

This is equivalent to 9.1% of total UK public sector expenditure.

Bank of America note that the country’s deficit may have improved in 2016/17, given the narrowing of the UK-wide deficit and recovery in oil prices.

“Even so, it highlights the importance of oil prices for the Scottish government deficit,” says Wood.

Marian L. Tupy, senior policy analyst at the Cato Institute's Center for Global Liberty and Prosperity, says “while the Scots resent their much bigger neighbour in the south, they are heavily reliant on English subsidies”.

Tupy believes the reliance of Scotland on England is bound to grow larger as Scottish oil becomes scarcer and falls in price due to the fracking revolution in the United States.

“It is that subsidy that allows Holyrood to maintain a much more socialist economic model than would be the case if Scotland had to fend for itself,” says Tupy. “Independence is exactly what Scotland needs in order to rid the birthplace of Adam Smith of socialism once and for all – after a brutal but necessary learning experience.”

There is also the question of splitting the UK’s debt burden - because Scotland has long been a recipient of UK borrowing it goes that it must accept its repayment obligations.

This will surely place a heavy demand on a newly independent country that has start afresh in establishing credibility with international lenders.

Daniel Mahony at the Centre for Policy Studies says all the data suggests that Scotland’s finances are precarious at the current time.

As can be expected, there are political ramifications to the data.

As the SNP probes its way towards a second referendum we have had confirmation that the party would seek to take an independent Scotland back into Europe.

However, the country's budget deficit poses a significant hurdle to such an outcome.

The EU’s Stability and Growth Pact ensures that new member states are expected to have a budget deficit of just 3% of GDP.

According to Eurostat, the general government deficit of the 28 EU countries is at 2.4%, while for the Eurozone it stands at 2.1%.

“This should concern those pushing for Scottish independence. With independence, the Scottish Government would have to take on the burden of a high budget deficit, which would inevitably lead to a combination of fiscal instability, higher taxes and a cut in government spending,” says Mahony.

Mahony points out that Scotland’s high budget deficit would also make Scotland’s entry into the EU even less likely.

And Scotland's deficit position is unlikely to improve anytime soon which suggests a vote for Scottish independence will leave the country outside of both the United Kindom and the European Union.

It is therefore worth pointing out that an independent Scotland - regardless of Brexit - would have been unlikely to enter the European Union thanks to its yawning budget deficit.

Cuts - the kind the SNP are not ideologically aligned with - will be required.

And then there is Spain standing in the way.

While the Spanish government has never threatened to veto Scotland's access to the EU, it has stated that it would need to negotiate access from scratch.

Catalonia is a sensitive issue for the Spanish government, particularly now that the Catalan government is threatening an unconstitutional referendum for secession this September.