The European Central Bank (ECB) is being tipped to slow the pace of interest rate hikes with a 50 basis points move next month following the release of Eurozone inflation data that came at a lower-than-expected rate.

Eurostat said area inflation rose 10% in the year to November, which is a decline on October's 10.6% and lower than the consensus expectation amongst economists for a reading of 10.4%.

"While we’re far from out of the woods yet, it does look like the current economic environment could push the European Central Bank to a smaller 50bp hike next month," says Bert Colijn, Senior Economist for the Eurozone at ING Bank.

But the month-on-month inflation reading registered a -0.1% deceleration in November, which is less than the previous month's growth of 1.5%.

The market was prepared for the data to undershoot given the pullback in inflation levels reported in Spain, Germany and Belgium on Tuesday.

The ECB can't afford to rest just yet, however, given core inflation is set at 5%, well above the 2.0% the ECB would prefer.

This reading is in line with consensus expectations and unchanged on October.

Core inflation is that element of the inflationary basket that strips out variables such as energy and food and can therefore be considered the more relevant inflation figure for the ECB.

As shown here, the elevated headline inflation rate continues to be driven primarily by energy prices:

Food, alcohol and tobacco prices are also contributing to the elevated headline rate, but services sector inflation actually fell from 4.3% in October to 4.2% in November, suggesting the pass-through of inflation might not be as severe as feared.

"We were due some good news. The eurozone inflation rate ticked down after a few nasty upside surprises," says Colijn.

But looking ahead the ING analyst cautions the peak in inflation is not guaranteed.

"Another episode in the energy crisis could easily push inflation back up again and core inflation usually proves to be sticky after a supply shock," he says. 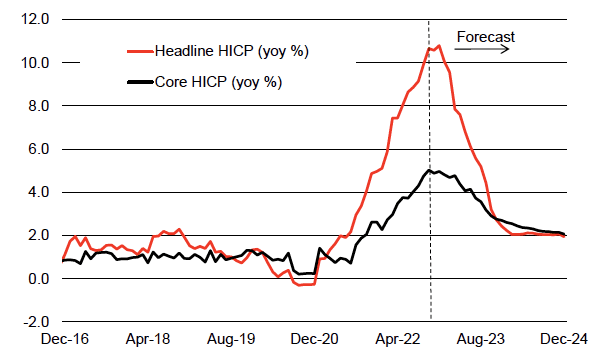 Above: "Eurozone inflation to decelerate strongly in 2023" - UniCredit.

UniCredit expects inflation to remain above 10% YoY until year-end, before entering a downward path that would take it towards 2.5% by the end of 2023 and to 2% by mid-2024.

"Base effects, broad stabilisation in commodity prices, demand compression and a further easing of bottlenecks are likely to be the main drivers of the deceleration," says Valli.

The ECB estimates that about half of the core inflation rate is attributable to supply-side factors. Valli says as these factors gradually fade and demand sags, core prices are likely to adjust downwards as well.

The ECB could be justified in considering a slower path of hikes, according to Valli who says a stabilisation in core is a key consideration for the central bank.

"In our view, two main conditions will have to be fulfilled before the central bank can halt its rate increases: 1. evidence that core inflation has peaked; and 2. the unemployment rate starting to rise," says Valli.

"We expect that both conditions will be met sometime over the course of 1Q23," he adds.

UniCredit looks for a peak level for the ECB's deposit rate at 2.75%, with 50bp hikes in December and February and a final 25bp move in March.