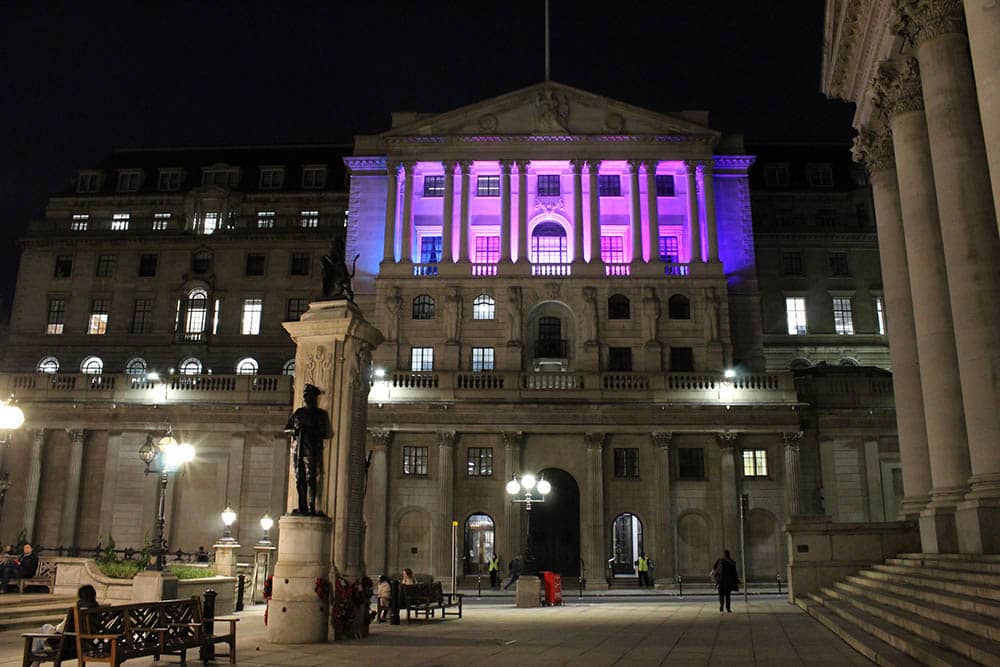 The Bank of England will delay delivering a first interest rate rise from December to February in response to Omicron, but will still be quick to push them higher in the first half of 2022 says Barclays.

Delaying a rate rise from December to February is perhaps not surprising given we have already had some forewarning from the Bank's Michael Saunders, but that rates will still rise materially in 2022 suggests the 'bigger picture' remains unchanged.

Markets were fully priced for a December rate hike as recently as the late-November period as incoming data showed a robust economic recovery to be underway.

The Pound rose alongside rising hike expectations and the subsequent pairing back of these expectations has been met by a decline in the currency's value against the Euro and Dollar.

To what extent a decision to leave rates unchanged in December has been fully accounted for by investors will determine how much further downside the Pound will endure.

"We believe rate hike expectations may be pared back further in the coming week and see downside risk for GBP," says a weekly strategy note from Barclays' currency research team.

Above: "Markets expectation of rate hikes fade by the day" - Barclays.

UK inflation is surging well ahead of the Bank's 2.0% target but MPC member Michael Saunders said last week Omicron would be a key consideration for the December 16 decision.

He said he sees "some advantages" in waiting due to Omicron, though also says delay could be costly too.

Saunders' position therefore remains that a delay should not be construed as a complete abandonment of the need to act on rising inflation.

Barclays' economists anticipate Omicron to worsen the Bank's policy trade-off in the near term, as the outlook for activity softens while risks around inflation may be somewhat more balanced.

The Omicron variant of Covid-19 is set to become the dominant strain of the virus in the UK within weeks and Health Secretary Sajid Javid on December 06 told MPs that it is now being transmitted in "multiple regions of England".

Real-time economic survey data shows consumers are already retreating from communal spaces such as gyms, pubs and restaurants in anticipation of a worsening in the pandemic.

Montagné says critical data on the variant's potency may not be available for weeks and faced with this certain uncertainty, they expect the Bank to delay rate action into next year.

"Despite healthy post-furlough labour market data, MPC members have not shifted decisively more hawkish, casting doubt over a December hike even without the emergence of Omicron," says the analyst.

Barclays now expects hikes first in February (15bp), then in March (25bp) and May (25bp), meaning a later start than than their previous December expectation, but more frequent and still wrapping up in May.

This means a non-negligible amount of rate hikes are due in the first half of the year, if Barclays are correct.

The Pound is highly reactive to market expectations for Bank of England interest rate levels and a move to 0.75% in Bank Rate could prove supportive.

Barclays says an incrementally more confident assessment of labour markets would consolidate the central view that monetary policy needs to tighten, and most likely so in February.

Labour market statistics for the September period came in well ahead of expectations, while statistics covering the crucial post-furlough month of October also revealed a surge in unemployment has been avoided.

In October the number of people seeking out of work benefits fell by 14.9K said the ONS, whereas a surge would have been expected in the event that the ending of the government's job support scheme (furlough) prompted a jump in unemployment.

"October's early estimate shows the number of people on the payroll rose strongly on the month and stands well above its pre-pandemic level," says ONS head of economic statistics, Sam Beckett.

The average earnings index with bonuses included rose 5.8% in September, surpassing consensus estimates for 5.6%, although this was down on the surge of 7.2% recorded in August.

The UK appears to have a 'tight' labour market where vacancies outstrip the number of workers seeking jobs, in turn creating upward pressure on wages and inflation.

This should allow the Bank to start raising rates once anxieties over Omicron have faded.