- Exports to EU rebound
- But trade deficit with rest of the world balloons
- UK exports to EU unlikely to fully recover soon: Berenberg

The data is significant in that it offers a window into how the UK's exporters and importers are performing in the aftermath of the UK's full exit from the EU.

The ONS says the exports of goods to the EU, excluding non-monetary gold and other precious metals, partially rebounded in February 2021, increasing by £3.7BN (46.6%) after enduring a record fall of £5.7BN (-42.0%) in January. 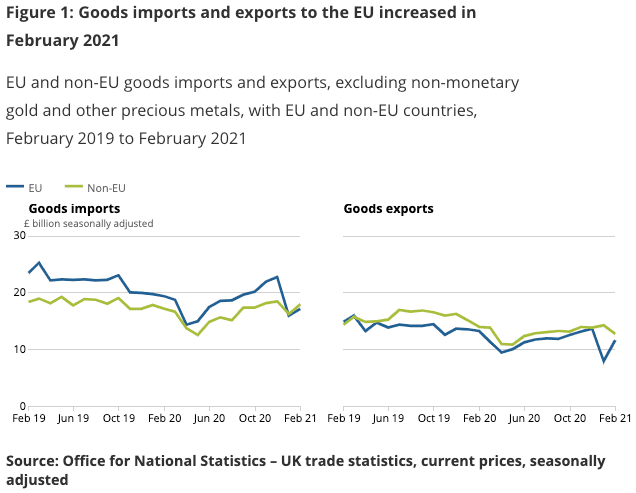 A trade deficit results when the value of goods a country imports is greater than the value of goods it exports. From a currency market perspective, a country with a trade deficit exports currency (it pays out more than it brings in), therefore the currency's value must rely on the inflow of capital from other sources to maintain or grow in value.

Despite the rebound in exports to the EU, it appears that a larger-than-expected trade deficit with the rest of the world has had a significant impact on this month's release.

The UK's trade balance with the rest of the world for February stood at -£10.73BN, which is far in excess of the -£4.05BN expected by the market, and deeper than the -£4.46BN reported in January.

"The lower value of miscellaneous manufactures exports in February is partly explained by the export of a single high value “erratic good” in January," explains the ONS.

The ONS says the increases in exports to the EU in February 2021 were driven by machinery and transport equipment and chemicals, particularly cars and medicinal and pharmaceutical products.

The ONS says the export of food and live animals to the EU increased by £0.3BN (77.4%) in February 2021, after being significantly impacted in January.

Exports of fish and shellfish to the EU also saw an uptick in February 2021 as exporters adjust to new regulations following the end of the transition period. 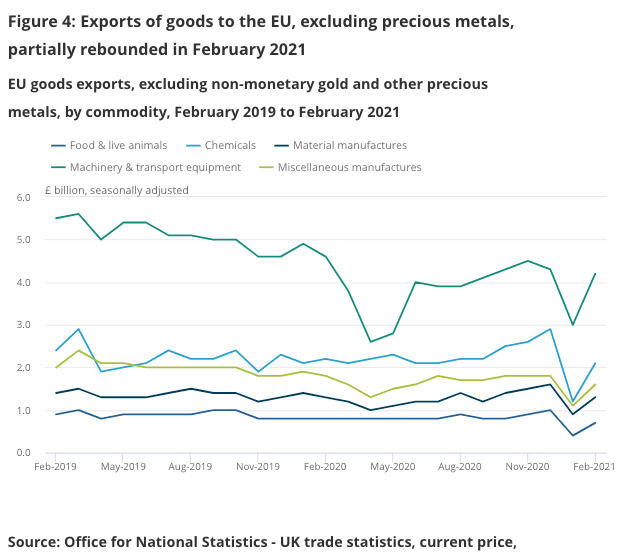 "While trade with the EU improved after the horrific performance in January, total volumes remain well below their pre-pandemic levels," says Kallum Pickering, Senior Economist at Berneberg Bank.

The ONS reports exports to the EU still remained 12.7% below their January 2020 level while imports remained 15.7% down.

"Although the monthly improvement suggests some of the initial teething problems related to the new border protocols may have a eased, it seems unlikely that UK-EU trade volumes can make a full recovery back to the levels that existed when the UK was in the EU Single Market any time soon," says Pickering.