City of London financial markets and Sterling exchange rates were little changed heading into the close on Thursday, indicating investors had priced-in the March monetary policy decision of the Bank of England (BoE) to perfection in a manner that might belie the nuances of economists' views on the subject.

The BoE's nine-member Monetary Policy Committee (MPC) voted unanimously in an earlier meeting to hold Bank Rate at 0.10% and continue with its £895bn quantitative easing programme (QE), which is composed of a £20bn stock of corporate bonds and a target to hold £875bn of government bonds.

Total assets held or targeted as part of the QE programme have more-than doubled from a post-referendum £435bn since the onset of the pandemic. The latter reflected a 2016 increase from a post-financial crisis level of £375bn.

"Budget 2021, published in March, contained a number of significant new policy announcements, including the extension of the Coronavirus Job Retention Scheme and other measures to support the economy in the near term which had not been reflected in the February Report," minutes of the MPC's meeting read. "If the outlook for inflation weakens, the Committee stands ready to take whatever additional action is necessary to achieve its remit. The Committee does not intend to tighten monetary policy at least until there is clear evidence that significant progress is being made in eliminating spare capacity and achieving the 2% inflation target sustainably." 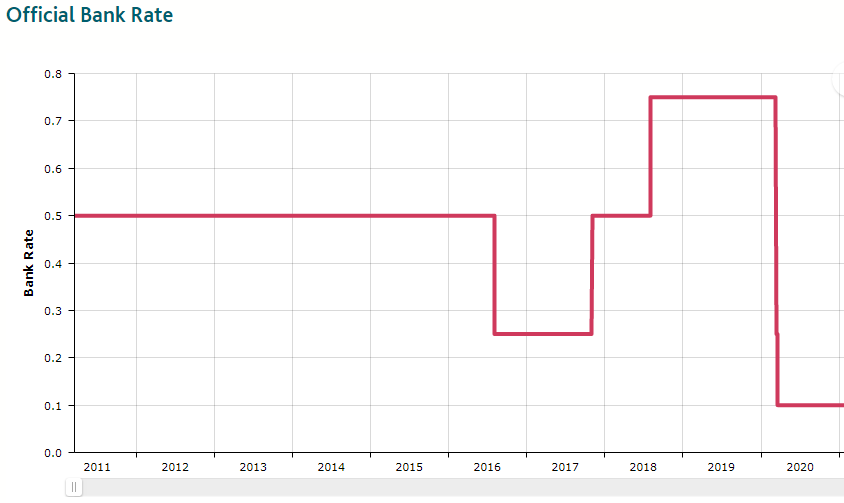 Bond purchases are intended to force down or otherwise limit increases in bond yields to levels that are consistent with a record low Bank Rate of 0.10% and the MPC's outlook for it, the UK and global economies as well as the all-important inflation the BoE is charged with management and stewardship of.

The BoE uses monetary policy tools including interest rates and QE to either raise or reduce inflation pressures over a multi-year forecast horizon, such that they're consistent with consumer price stability around the 2% level.

Doing this requires policymakers to take into account many things however, including the current condition and outlook for the domestic as well as global economies, which is where nuances creep into and in between the views of policymakers, economists, analysts, investors and traders.

"Developments in global GDP growth have been a little stronger than anticipated, and the substantial new US fiscal stimulus package should provide significant additional support to the outlook. In part reflecting this and alongside positive news on some vaccination programmes, advanced economy longer-term government bond yields have risen rapidly to levels similar to those seen shortly before the pandemic," minutes of the MPC's meeting say. "The sterling effective exchange rate has appreciated and mortgage credit conditions have eased a little. An aggregate measure of UK financial conditions has been broadly unchanged since the February Report." 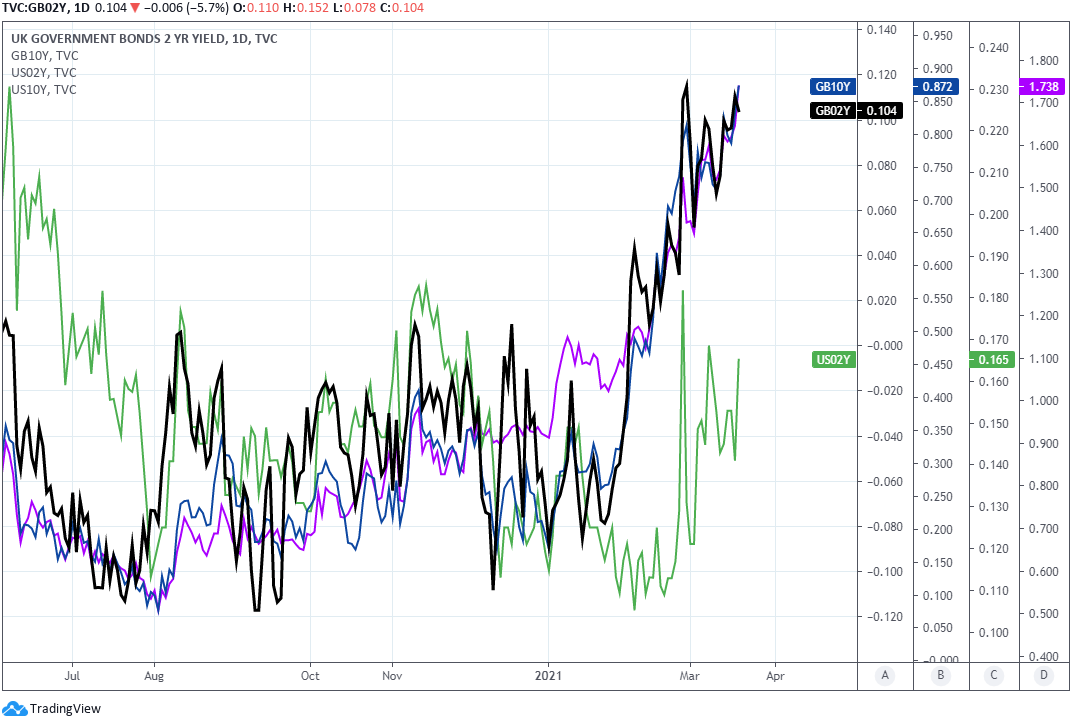 The big question heading into the meeting was what if-anything rate setters would say about developments in the bond market since the time of February's meeting, in no small part because of the role that bond yields and broader "financial conditions" play in the 'transmission of monetary policy.'

Yields have surged the world over of late including in the UK, though with moves being led by the U.S. market. This means bond prices have been falling, with investors selling them potentially due to a judgement that yields may have been too low. Prices move in the opposite direction to yields.

But yields are returning from what were record lows and the BoE's judgement appears to have been that for now at least, the UK economy can weather recent increases as well as the current level of British bond yields.

Below is a selection of economists' remarks on Thursday's decision and views on the outlook for Bank of England monetary policy.

"The Monetary Policy Committee’s (MPC) is turning more optimistic about the UK economic outlook. Crucially for markets, policymakers remained comfortable about the recent rise in gilt yields. Judging by the March meeting minutes, policymakers feel no urgency to lean against rising gilt yields with actions or words. The minutes suggest that the March meeting was dominated by discussions about the improved near-term outlook and upside risks."

"The Committee had nothing new to say about how it will tighten policy, when the time comes.  Bank staff, who were instructed last month to consider whether the MPC should commit to reducing the stock of asset purchases before raising Bank Rate, probably will not report back until August. At that point, we expect the Committee to adopt such a commitment, making it unlikely that the MPC will raise Bank Rate quite as soon and as quickly as markets currently expect."

"At this stage we are not inclined to shift our view that the next move in the policy rate will be a 25bp increase (to +0.35%) in Q4 2023. By contrast, the yield curve is factoring this in some nine months later. We also note that the curve is no longer pricing in a reduction into negative territory - by contrast a 25bp cut was almost fully discounted at the turn of the year. Even so, the entirety of the uncertainty hanging over the economy has yet to be lifted."

"In our view, the government’s timetable for reopening the economy means the odds of the recovery needing more monetary support are slim. While inflation is set to rise sharply over the next few months, like us the MPC continues to see this as a strictly temporary problem...We won’t see the MPC’s full assessment of the economic implications until May. But the committee implied that it would moderate its forecast for the peak in the unemployment rate from the 7.75% predicted last month."

"GBP/USD had held slightly firmer than other FX majors into the BoE meeting, trading around 1.3965. Confirmation of the unchanged stance on policy and a relatively neutral take of the minutes saw GBP play some catch up against the firmness in USD and US rates and slid to test 1.3900 into UK’s mid-afternoon before stabilising to trade at 1.3940 and maintaining some of its gains against EUR, trading +0.25% on the day."

"Despite some minor gyrations on the BoE announcement, shorter dated yields were also influenced by US yields and curve steepening. 2023 Short Sterling futures slipped 2.5 to 3bps though 2021 contracts edged firmer (lower yields) at the margin. UK’s equity markets also followed the direction of regional and global markets, rather than being impacted by the MPC to any great extent, and traded marginally firmer in late trading."

"The Monetary Policy Committee did not follow in the ECB’s footsteps by stepping up the pace of its QE purchases. Instead, it echoed the message of the Fed by emphasising that rate hikes are still a long way away....Overall, we think the markets have gone too far in expecting interest rate hikes from mid-2022. We think that rates won’t rise above their current rate of +0.10% until 2026. As a result, we doubt the 10-year gilt yield will increase much above 1.00% over the next two years."

"They are looking to find the right balance, being cautious but optimistic, not unlike the FOMC on Wednesday. For the Bank of England, this effectively meansthat the decision to taper or to expand the asset purchases, as the current pace of GBP 4.4bn aweek is simply too fast for the GBP 150bn increase that is planned in 2021, is left for another day.The speeches in the run-up to the May meeting will therefore be particularly interesting."

"Much of the focus was around how much concern the Committee would express over the dampening effects of the recent move higher in bond yields, particularly given the distress shown by the ECB last week. However, as it was, much of the move higher in market interest rates was tied to the improvement in the economic outlook, which is similar to comments from the US Federal Reserve last night."