- Market rally fizzles
- Monetary and fiscal stimulus 'in the price'
- Barclays say too soon to buy into 'risk assets'
- Forecast UK growth to fall 1.1% in 2020

The FTSE 100 (INDEXFTSE: UKX) trades lower on Thursday as a sharp recovery that saw four consecutive days of gains fades, suggesting a central bank-fuelled rally might have run its course for now and UK high street lender and investment bank Barclays say it is too soon to buy stocks.

A decisive and far-reaching effort by the world's central banks to provide liquidity and fresh money to financial systems appears to have provided a backstop to the free fall in global stocks and risk-associated assets, while governments have also stepped in to provide substantial amounts of debt-fuelled fiscal support.

The U.S. Senate approved a $2 trillion rescue plan for the U.S. economy after days of wrangling between the Democrats and Republicans and sent it to the House, which was scheduled to vote on the legislation Friday.

"The Congress-powered rebound seems to have fizzled as futures point to a 2% drop at the open today. A similar situation is true in the currency arena, where the yen is recovering ground early on Thursday as commodity-linked currencies are left behind," says Marios Hadjikyriacos, Investment Analyst at XM.

While monetary and fiscal authorities have stepped forward with sizeable support packages, investors will be asking whether the market is merely pausing before taking another leg lower.

Indeed, the ultimate solution to a pandemic will come from the medical profession, not financial.

"We think it is too early to turn positive," says Ajay Rajadhyaksha, Head of Macro Research at Barclays. "Investors will need to see clear signs that large economies, including the U.S., has turned the corner on controlling contagion before being able to stage a sustained rally."

There are four markers Barclays will be looking for before turning positive on 'risk assets', such as stocks, again:

1) "We will be looking for signs that large economies are finally testing at scale and getting a handle on the scope of the contagion, even if that involves an exponential rise in cases over the next several weeks.

2) "We would need a few weeks where daily new cases fall every single day, which would be a sign that the West finally has the virus spread under control.

3) "We will be looking for signs that nothing major in financial markets has "broken" on a systemic scale in the chaos of recent months.

4) "We will be looking for signs that the fiscal stimulus measures enacted are effectively reaching small and medium enterprises in particular, cushioning the eventual pace of job losses."

Barclays now forecast a global recession almost as large as in 2009, with a massive contraction in the first half of the year; the world economy will basically be at a standstill in 2020.

"There is a wide range of risks around this forecast, with most skewed to the downside," says Rajadhyaksha.

An assumption assumed by Barclays is that social distancing measures and testing will see the virus put under control by June, but the risk to this model is a second flare-up of the virus.

"Some of the recent models of the pandemic are discouraging because they suggest that after a brief lull in the summer, it will be back in the autumn and winter. If that were to be the case, a H2 recovery would be unlikely, and there could be a worse global recession than in 2009," says Rajadhyaksha. 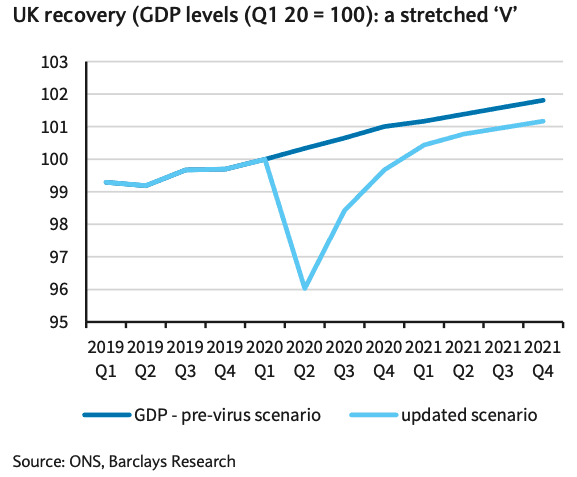 Above: The UK economy will see a 'delayed v' shape recovery.

"The prospect of a V-shaped recovery to be very unlikely even if our assumptions hold true. 60-70% of GDP in countries being affected by COVID-19 is in the form of services. While a temporary halt in consumption may lead to pent-up demand for goods, this will not be possible for services – that economic output will be permanently lost," says Rajadhyaksha.