Core Retail Sales - which exludes fuel - rose 1.6%, well ahead of expectations for growth of 0.8%.

The data appears to have had a minimal impact on Sterling which looks increasingly priced for the current spell of better-than-expected data releases. 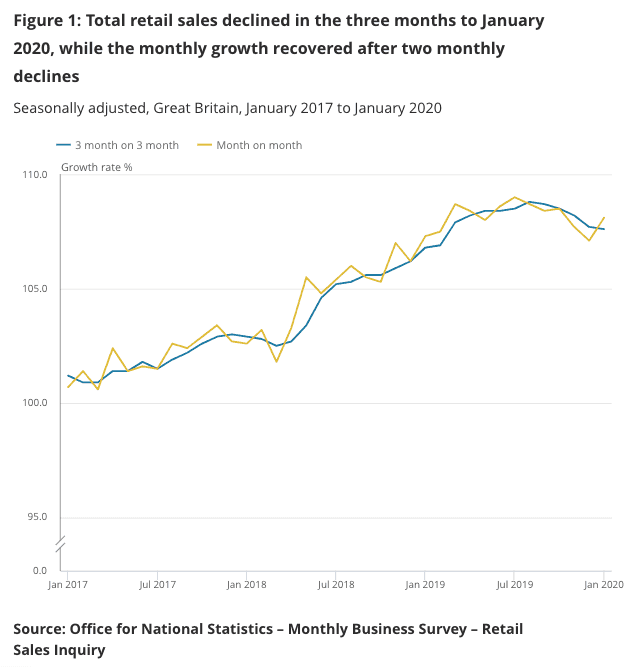 Tombs observes the headline number has been depressed by a huge 5.7% month-to-month drop in fuel store sales—the biggest since March 2015—driven by a rise in fuel prices and bad weather.

"Fuel store sales should recover soon, given that oil prices have fallen back since January, though the recent storms might prevent demand recovering as soon as February," says Tombs. 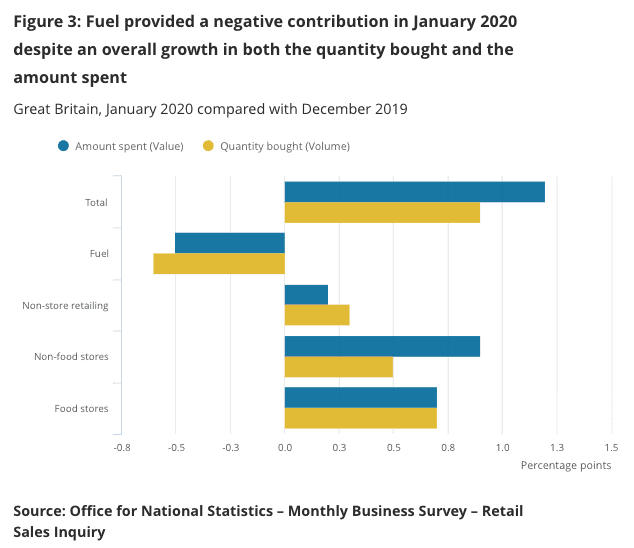 "Boris bounce in January UK retail sales," says Viraj Patel, a strategist with Arkera. "Details show spending pick-up in items that have been typically weak in 2019 (textile/clothing). Either a one-off or confidence boost kicking in."

Howard Archer, Chief Economic Advisor to EY ITEMClub says the pickup in retail sales looks decent, noting it to be the first rise since October and "suggests a rise in consumer confidence since the December election has lifted willingness to spend."

The pickup in spending comes following a particularly poor period for the retail sector, as the quantity bought in the retail sales industry fell by 0.8% in the three months to January 2020, when compared with the previous three months, with declines across all sectors.

January's numbers represent only the second monthly rise since July and will go some way in reversing the falls witnessed in November and December.

"By ruling out a no deal Brexit on 31st January, December’s election result gave consumers the confidence to reopen their wallets," says Paul Dales, Chief UK Economist at Capital Economics.

Concerning the outlook, Dales warns retail sales are unlikely to climb at this pace for long as some of it is probably just a catch up from the previous weakness.

"What’s more, the extremely wet weather and floods will have pushed shopping down the list of priorities in February (apart from for sand bags and wellies). And the effects of the coronavirus may be hurting sales in areas frequented by Chinese tourists (Bicester Village) and may lead to shortages of some products (clothing, electrical appliances) in March," says Dales.

Watch: ING on why the 'Boris bounce' might disappoint:

The long Brexit process has taken its toll on the UK economy. Business investment is pathetic compared with that of the US and Germany, up just 1.3% since the vote to leave the EU nearly four years ago. America is up by more than 13% and Germany by more than 10%. While surveys suggest UK businesses are becoming more optimistic, ING’s James Smith explains that getting a trade deal with the European Union is going to be extremely difficult and that uncertainty will keep a lid on growth for the foreseeable future.