- After downgrading UK forecasts on run of weak economic data.

- Coronavirus a wild card for interest rate outlooks the world over. 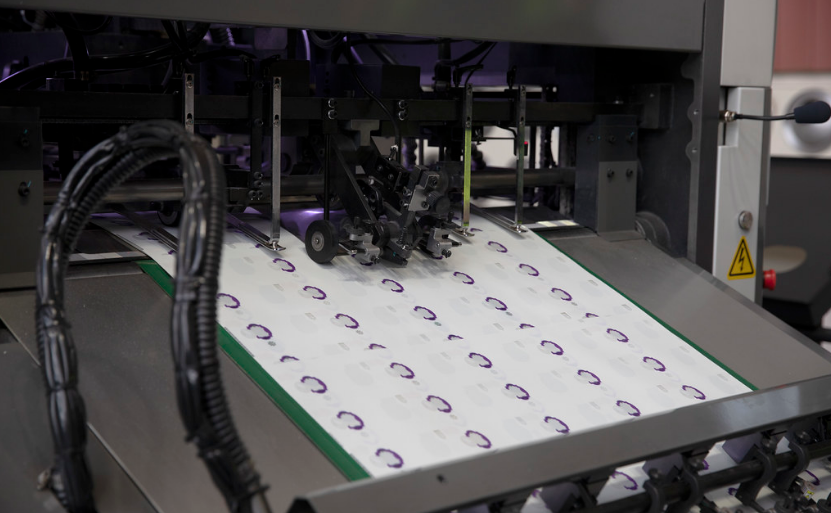 The Bank of England (BoE) said Thursday that risks to its outlook are "broadly balanced" after downgrading forecasts for UK growth in what was expected to be a knife-edge decision on whether to cut Bank Rate or leave it unchanged.

Monetary Policy Committee (MPC) members voted by 7-to-2 to leave Bank Rate unchanged at 0.75% when five of the nine-strong committee had previously indicated they could vote for a cut to 0.50% this month. However, and following what was Governor Mark Carney's final outing as chair of the MPC, the bank left the door open to a rate cut in the coming months when it warned that further stimulus might still be necessary if its forecasts prove to be too optimistic.

"There are signs that global GDP growth has stabilised and it is expected to pick up over the forecast period...The MPC judges that the risks around the global growth projection are broadly balanced."

The decision came despite downgrades to the BoE's UK economic forecasts that have left policymakers looking for slower GDP growth throughout the current year, wing mainly to the anticipation that net exports will weigh heavier on the economy than previously thought.

That's despite the bank revising up its estimate for global growth and sounding a more upbeat tone on the outlook for international trade elsewhere.

"There were signs that the MPC has become more dovish since December. The MPC kept (but tweaked) its “up/down” monetary policy guidance that states that “should the positive signals from the indicators of global and domestic activity not be sustained” then the MPC will cut rates, and if neither of those things happen and the economy recovers, then the MPC will modestly raise rates," says Ruth Gregory at Capital Economics. 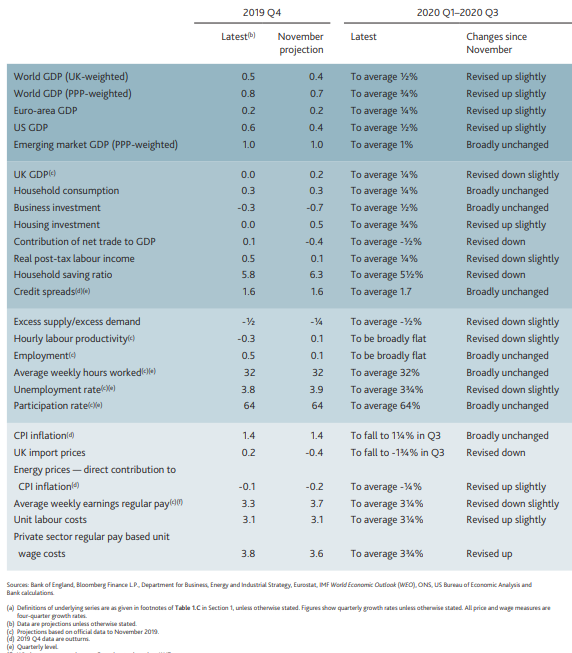 Above: Bank of England forecasts from January 30, expressed as annualised figures.

"The MPC judges that the risks around its projections for demand growth are broadly balanced.

The outlook for CPI inflation will also be affected by movements in sterling, which is likely to remain sensitive to Brexit developments.

Risky asset prices over the past few months might suggest that there is somewhat more confidence about the outlook for trade policy. But concerns about other global risks — including the outbreak of a new strain of coronavirus — might have risen."

Uncertainty has long featured prominently on the BoE's list of concerns, although this time the bank was acknowledging a reduction of it now a 'no deal' Brexit has been averted until at least the end of 2020 and the U.S. and China have agreed to put their tariff fight on hold for what could be a similar period.

"If this "deep free trade agreement" is looking doubtful or even unclear, the market will probably maintain pricing for easing and if the data remains mixed, policy easing is likely forthcoming. We view the BoE as currently possessing an unjustified level of optimism,” says Derek Halpenny, head of research, global markets EMEA and international securities at MUFG.

The BoE's assumptions leave its outlook exposed to significant risks while the bank hasn't yet been able to model or include in projections any estimates of the possible global growth hit from the rapidly spreading Coronavirus.

Coronavirus has now infected more people than the 'SARS' strain of it did in 2002-2003, which hampered global growth at a time when China was a much lesser component of the global economy.

"The MPC seems in no rush to loosen policy. The 7-2 split in favour of keeping rates unchanged was more hawkish than the consensus had expected (6-3). And most members were content to wait until March before reassessing the outlook for monetary policy. We suspect that by then, the MPC will be able to conclude that the economy is strengthening and with a big fiscal boost in train that lower rates are no longer needed," says Capital Economics' Gregory. 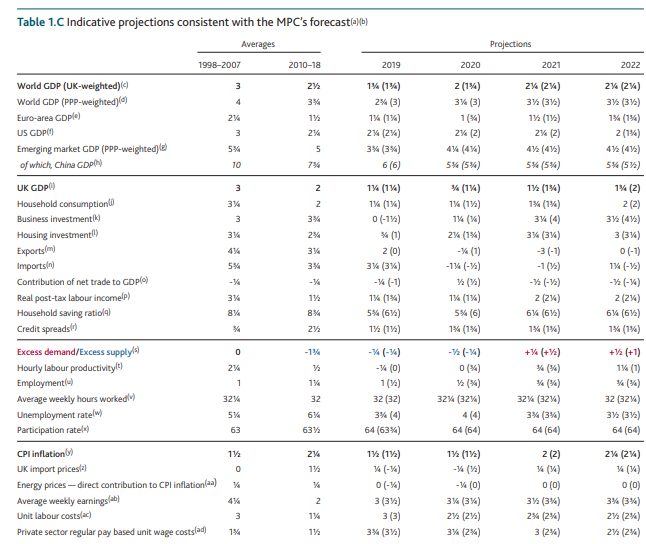 Above: Bank of England forecasts from January 30, expressed as annualised figures.

UK economic growth fell to just 0.6% in the year to the end of November, far below the full-year forecast of the BoE and also below the expansion the economy is estimated to need in order to generate inflation.

That's a problem for the BoE not only because it suggests the economy might be in trouble, but also because the consumer price index fell from 1.5% to 1.3% in December, leaving it a long way below the bank's 2% target.

And since then risks to the outlook at least appear to have mounted, with Boris Johnson keeping some form of 'no deal' Brexit on the table and with the new coronavirus having some success in escaping from China, which is facing at least a sharp first-quarter slowdown due to the growing epidemic.

However, the Chancellor is expected to unveil a large fiscal stimulus on March 11 that could smooth the path ahead for the economy.

“With the UK’s exit deal now backed by the EU parliament, and the base rate on hold until at least 26 March, internationally trading businesses will be increasingly conscious of the value of sterling during the Brexit transition. With negotiations on trade deals due to start imminently it is a crucial time for SMEs to get a competitive exchange rate. After today’s events, with the pound stronger, importers are expected to benefit,” says Christopher Redfern, corporate dealing manager at Moneycorp. 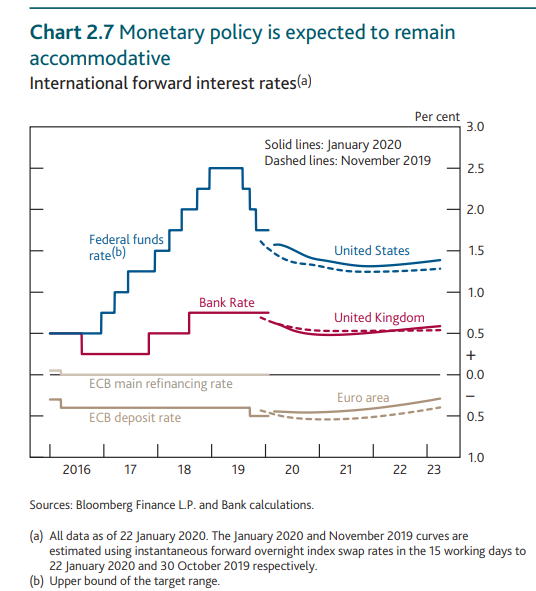 The BoE has left rates unchanged at 0.75% since August 2018 and has consistently prepped markets to expect hikes in the years ahead because it's always forecast rising or resilient price pressures rather than falling inflation. It argues the Brexit vote and UK government's exit proposals have reduced the "supply capacity" of the economy, reducing the pace of "trend growth" and leaving it more susceptible to bouts of increased inflation.

"Actual output is currently judged to be ½% lower than potential GDP," the BoE says, on page 37 of its January policy report.

The BoE's 'potential growth' estimate was reduced from 1.25% to 1% Thursday, which partly explains why it argues inflation will rise back to the 2% target within the forecast horizon despite downgraded growth projections for the period.

And the inflation forecasts explain why the BoE and some forecasters still see a rate hike as a possibility for the year ahead, if not a likelihood, although financial markets are yet to be convinced.

But pricing in the overnight-index-swap (OIS) market has come to suggest strongly that a rate cut is all but certain to come at some point in the months ahead and the BoE itself is still conditioning all of the above economic forecasts on the assumption that Bank Rate follows the path implied by the OIS market.

"The MPC’s decision is best characterised as a “dovish hold”, designed to keep market interest rates at current stimulatory levels and to preserve the option of cutting Bank Rate swiftly and without surprise, if the economy fails to rebound," says Samuel Tombs, chief UK economist at Pantheon Macroeconomics. "Expect the recent pattern of big market reactions to U.K. data releases to continue."