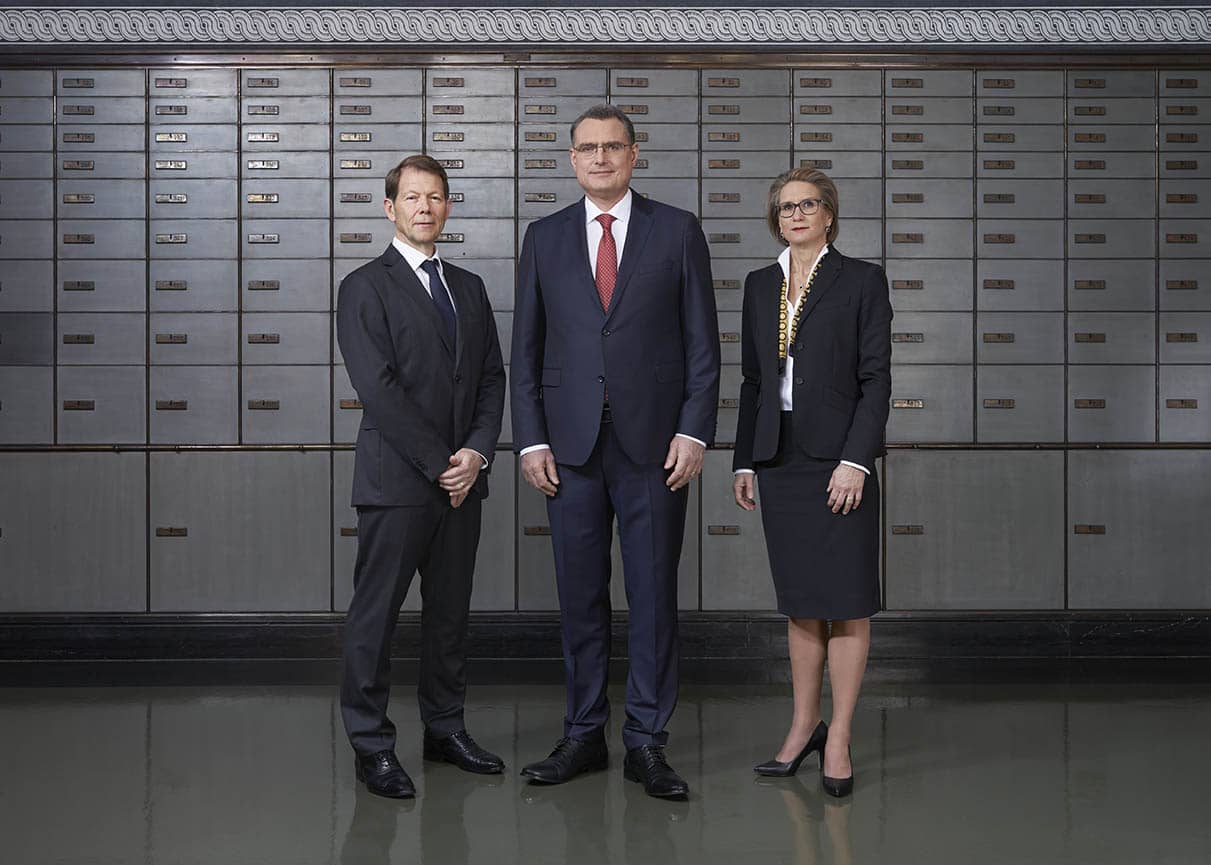 The Swiss Franc was seen underperforming most other major currencies after the Swiss National Bank’s (SNB) June policy guidance upset some foolhardy investors who’ve been betting the bank might lift its interest rate over the coming years.

The Pound-to-Franc exchange rate was nearly half a percent higher, aided in substantial part by a similar sized increase in USD/CHF and Sterling’s resilience against an advancing U.S. Dollar which was itself back in demand against many currencies after a shift in guidance from the Federal Reserve (Fed).

Swiss Franc losses accelerated after the SNB announced new inflation forecasts which still leave the consumer price index sitting barely above zero percent at the end of 2023 and even after assuming that Switzerland’s cash rate would remain at a deeply negative -0.75%.

“Inflation has been positive since April and is thus back within the range consistent with price stability. It is likely to rise further in the course of the year, before declining again somewhat,” SNB Chairman Thomas Jordan reiterated in the bank’s first in-person press conference since Switzerland began to roll back the latest coronavirus wave. 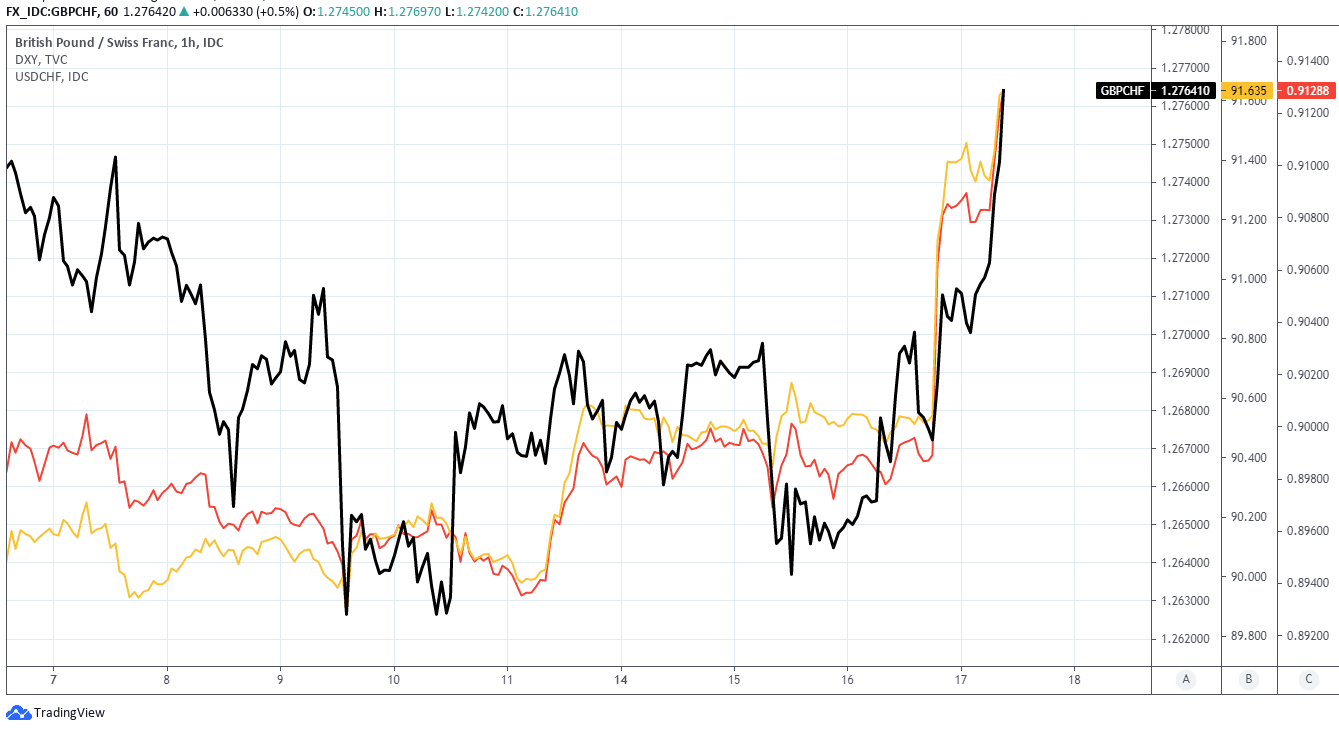 Above: Pound-to-Franc rate shown at hourly intervals alongside USD/CHF and U.S. Dollar Index.

This was potentially disappointing to investors who’d recently bet the bank may eventually have become minded to lift its interest rate by then, and could explain accelerating increases in USD/CHF and GBP/CHF following the announcement.

More so given that Chairman Jordan later said in the press conference that in order for the SNB to announce a change in its interest rate, which is currently the lowest in the world, inflation would have really have to go outside of the range considered consistent with medium-term price stability.

“In short, if you’re looking for monetary policy action, you would do well to look elsewhere, perhaps towards Norway or the US,” says David Oxley, a senior economist at Capital Economics.

“While investors are discounting a 25bp hike in Switzerland by end-2023, we think there is little prospect of a hike by the SNB until beyond our forecast horizon,” Oxley says.

The SNB reiterated Thursday that it remains “willing to intervene in the foreign exchange market as necessary, while taking the overall currency situation into consideration,” in order to prevent any unwarranted strengthening of its “highly valued” exchange rates which were recently described by Chairman Jordan as “very strong.”

Strong exchange rates make imported goods cheaper to buy and so can reduce inflation which, in Switzerland among other economies, tends to exacerbate long-established challenges for central bankers who’re normally tasked with delivering a steady average level of inflation over around 2% in general across developed economies.

“The ECB's decision in 2014 to lower its deposit rate below zero was a watershed moment for monetary policy in Switzerland. The SNB had to abandon the 1.20 euro peg in 2015, and has since had to take significant evasive action to avoid capital inflows, and the disinflationary winds of a strengthening currency,” explains Claus Vistesen, chief Eurozone economist at Pantheon Macroeconomics.

“The central bank is now forced to run a deposit rate below that of the ECB, and the weekly change in so-called "sight deposits" is a near-real-time measure of the degree to which the SNB is intervening to hold back currency appreciation.”

The Swiss Franc has risen throughout the second quarter and indicated a reluctance to decline during June even as the U.S. Dollar began to rise against other currencies, although the Federal Reserve’s subtle shift in its own monetary policy guidance had also lifted the Dollar widely by Thursday including against the Franc.

“Despite markets remaining in a carry-favorable environment and the recovery continuing in Europe, the ongoing sense of caution is inescapable, especially for the main components of the franc’s TWI,” says Geoff Yu, a senior EMEA market strategist at BNY Mellon.

“The monthly change in sight deposits – a proxy for intervention flow – has picked up noticeably and this has coincided with a recovery in the franc’s nominal effective exchange rates,” Yu adds. 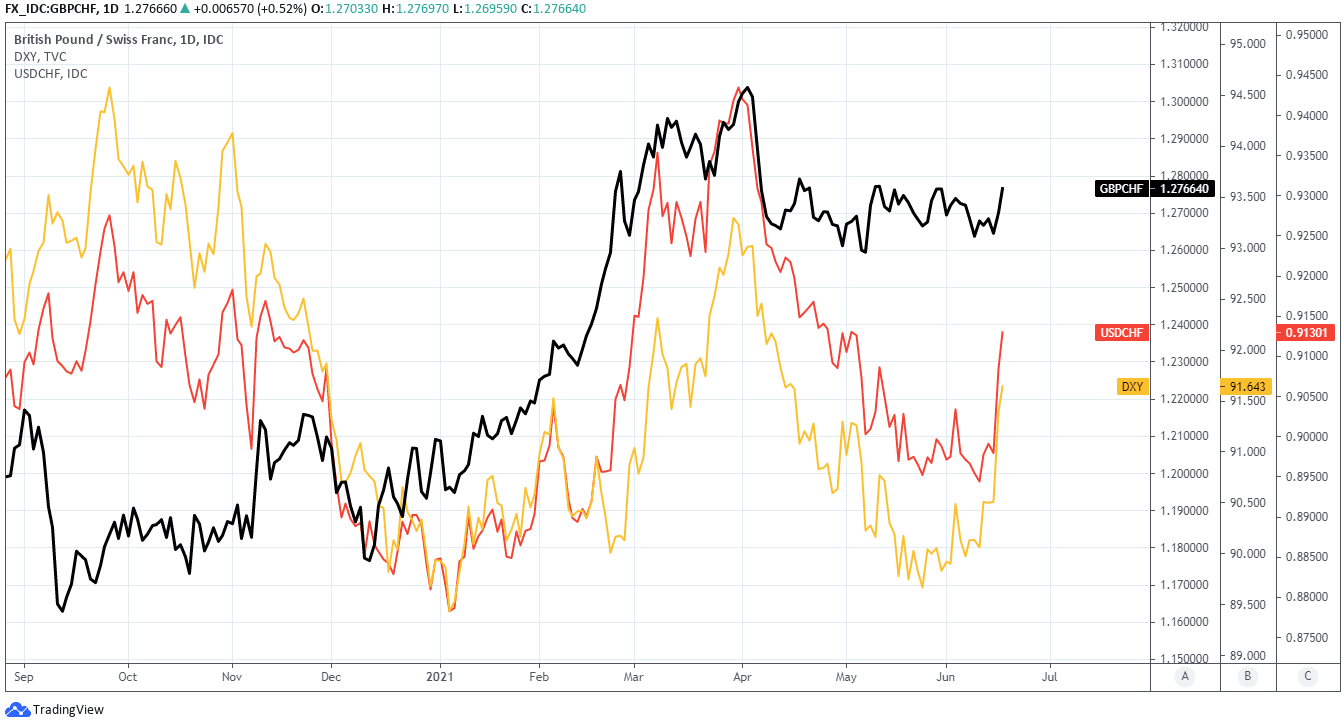 Above: Pound-to-Franc rate shown at daily intervals alongside USD/CHF and U.S. Dollar Index.