There are a number of reasons to start turning shy on the Canadian dollar following its 2016 period of outperformance.

A look at the charts confirm the Canadian dollar’s advance is by no means over yet.

The US to Canadian dollar exchange rate (USD/CAD) has fallen from 1.4690 reached in January to current levels around 1.2725 as the CAD embarked on a period of appreciation alongside rising oil prices.

In trying to anticipate future CAD moves we note that there is yet to be a discernible base formation, the first requirement ahead of any recovery in the pair.

Indeed, USD/CAD is trading below its key moving averages, and until we see a break above the 20 day moving average we will continue to anticipate further declines.

Note too that momentum is deep in the red (lower pane): 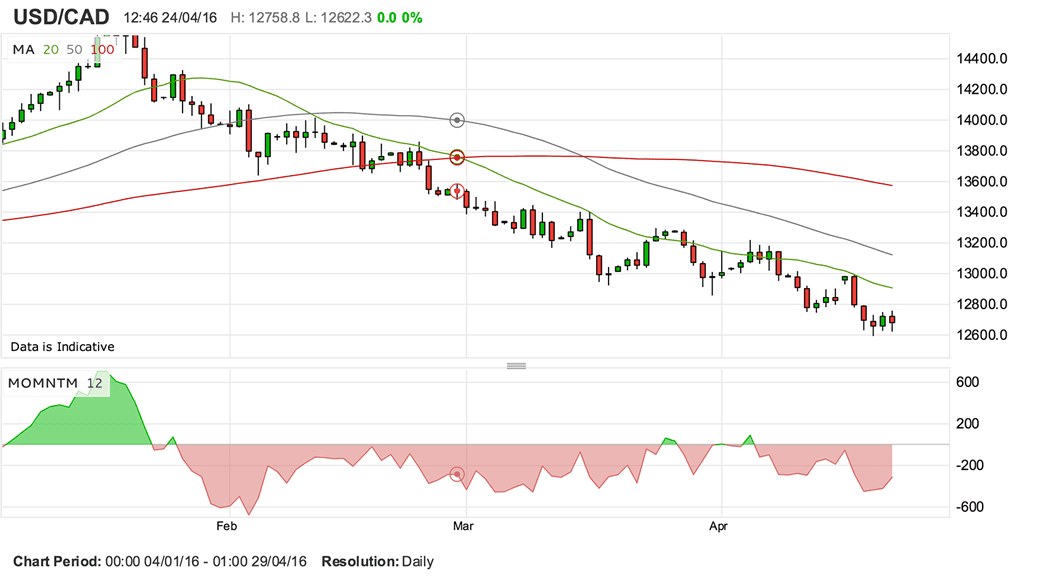 Against the pound sterling, the CAD could be running out of strength as there is in fact a tentative attempt at forming a base. The pound has been a strong performer over the past two weeks with signs that the markets have had their fill of EU referendum selling for now.

The currency pair is finding a good amount of demand at 1.8080 it would seem, this has allowed the formation of a ‘double bottom’ (looks like a W) which technical traders often use as the basis to buy as it suggests a floor has been found. 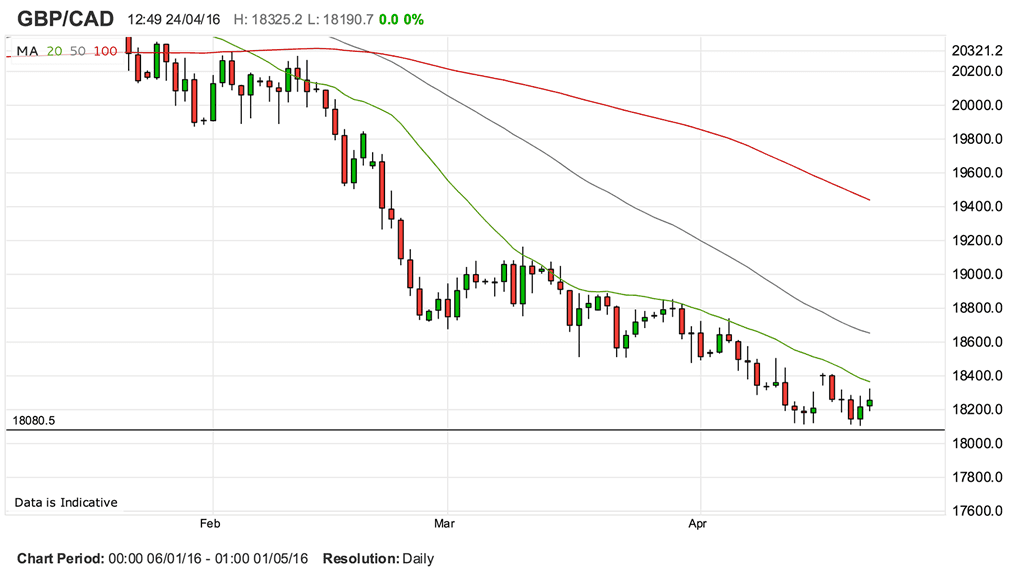 That said, the pair continues to trade below its moving averages while momentum here is also negative.

The Canadian dollar remains in command, we believe, and this will continue to press against the Canadian export sector which would like to see a weaker currency in order to stimulate international demand for Canadian produce.

Will the Bank of Canada Block Further Strength?

At its April meeting, the Bank of Canada nudged against recent Canadian Dollar strength, noting in the statement the profile of non-energy exports was weaker than projected, in part driven by the higher C$.

Governor Poloz’s attempt at capping CAD strength was by no means aggressive, nevertheless the comments do suggest there is a concern.

We would imagine that as the currency grows in strength so too will the BoC’s displeasure, and therefore so do the dangers that the BoC could act and weaken the currency.

Poloz and Senior Deputy Governor Wilkins then appeared in Parliament last week to discuss the outlook for the Canadian economy.

Poloz noted that the recent outperformance seen in the Canadian economy is not forecast to persist as the positive boost provided by a weaker CAD heading into 2016 is diminished.

They stated that the strengthening Canadian dollar was clouding the outlook for the economy:

"The Canadian dollar has also increased from its lows. Our assumption in our current projection is 76 cents US, four cents higher than in January. While there are many factors at play, including oil prices, most of the increase appears to be due to shifts in expectations about monetary policy in both the United States and Canada. The higher assumed level of the dollar in our projection contributes to a lower profile for non-resource exports, as does lower demand from the United States and elsewhere."

The rising CAD, and other developments, would have meant a lower projected growth profile for the Canadian economy than the BoC had in January.

The question now becomes, how far will the CAD fall in light of a central bank that clearly does not like what it is seeing?

By mid-April the Canadian dollar had earned the accolade as the 3rd best performing currency this year, behind JPY and NOK, having appreciated a sharp 5% since end-Feb as oil rallied.

The Federal Reserve Bank’s dovish tone and comfort at “being behind the curve presents headwinds for the U.S. dollar broadly with higher breakevens supporting higher-beta currencies, like CAD, as US real yields move lower,” notes Bank of America’s Gordon.

However, the supportive factors for the Canadian dollar have also grown, the policy signal is muted as the BoC prepares to raise its growth forecasts on the back of the recently announced Federal spending plans.

Illustrating the positive momentum, Canada has the second strongest data surprises in G10.

“Together, these developments leave the BoC comfortably on hold over the foreseeable future, and if sustained suggest continued support for the C$ near-term,” says Gordon.

However, Gordon and his team believe the US dollar will ultimately start moving higher against the Canadian dollar once more. 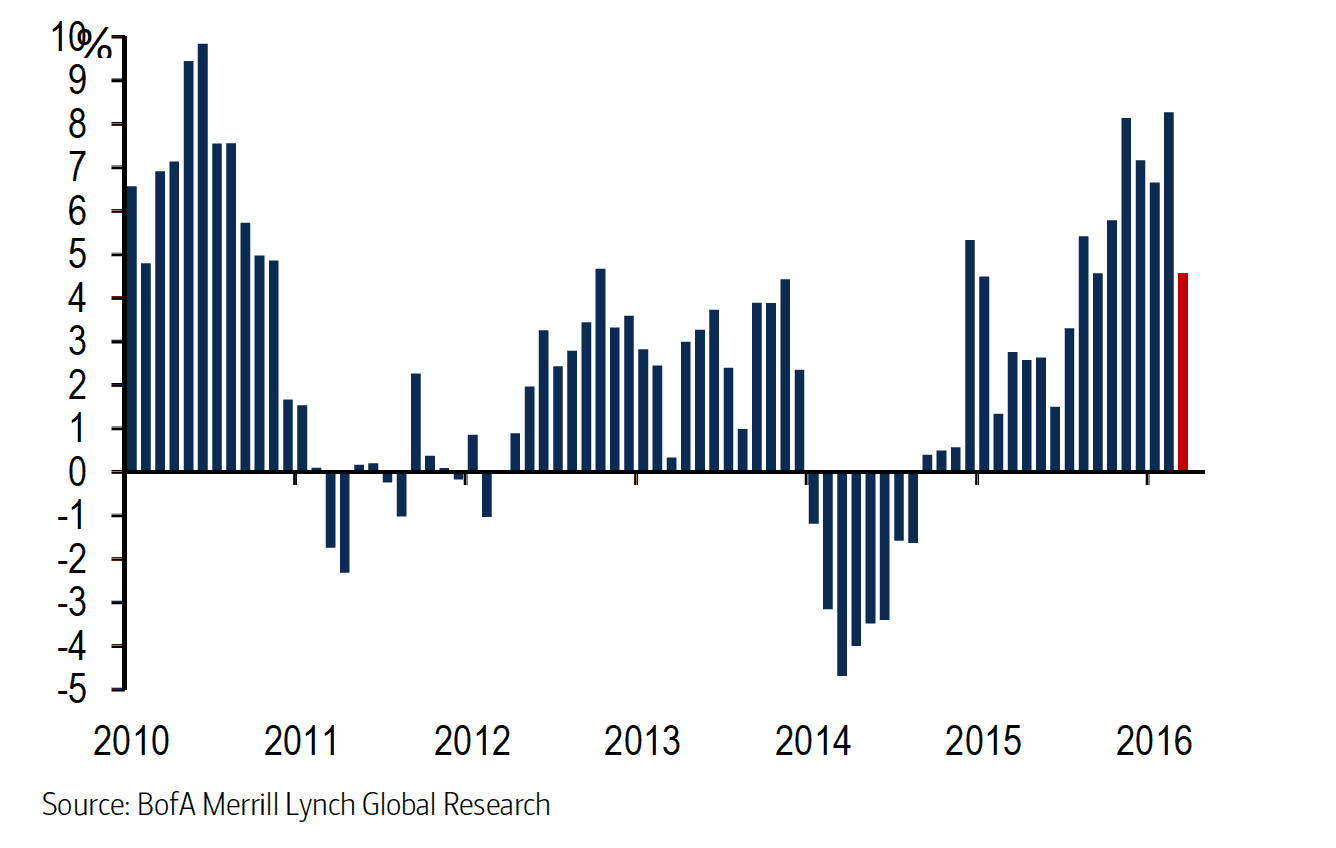 Bank of America believe that while oil prices at $40/bbl are better than $25, they are still below the full-cycle breakevens costs of Canadian producers suggesting further industry consolidation and a headwind for the economy.

Upside Risks to the US Dollar

The Bank of Canada themselves have noted that the biggest driver behind the recent appreciation in the Canadian dollar in fact lies with USD weakness, which in turn has the US Fed to thank:

“Most of the increase appears to be due to shifts in expectations about monetary policy in both the United States and Canada,” Poloz told the Canadian parliament last week.

Gordon says with the market pricing less than 1 full hike for the rest of 2016, the risks are on the upside for the dollar, particularly if lower China risks support financial conditions, a key Fed concern, and inflation continues to move higher.

June is the next focal point.

Fed officials will want to guide expectations higher if as we expect they will hike then.

Another reason to expect a USD/CAD recovery, it is argued, is that speculative investors turned a modest net long CAD position for the first time since May 2015.

The Pound to Canadian Dollar exchange rate has lifted tepidly from close to three-year lows and has been aided by a supportive turn in UK government bond yields, although it could struggle to advance much beyond the 1.6150 level this week due to the ongoing resilience of the Loonie.