Canada’s Dollar slipped toward the bottom of the G10 league table during the week to Wednesday having been underperformed only by its U.S. counterpart while the Mexican Peso was not far behind the Loonie when the comparison is extended to incorporate G20 currencies.

This lagged performance by the Loonie has helped the Pound to Canadian Dollar exchange rate to remain buoyant above the 1.60 handle for the most part of the week to date and could enable the Sterling pair to recover further recently lost ground if it persists through the weeks ahead.

“We note that over the past few sessions, terminal rates in Canada have fallen some 20bps – from 3.1% (used in this writing) to now 2.9%. This has been largely driven by US spillover,” says Sarah Ying, a quantitative strategist and director of FICC strategy at CIBC Capital Markets. 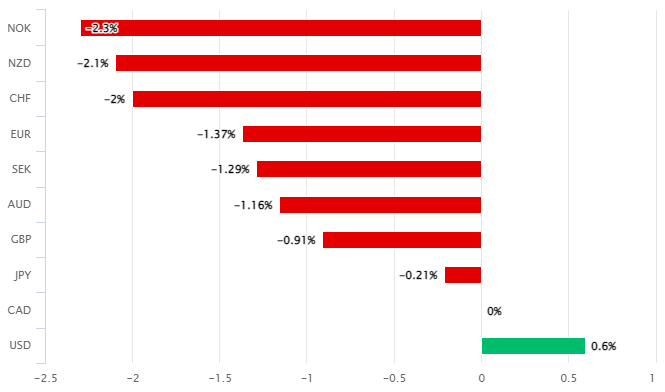 Above: Canadian Dollar relative to G10 counterparts during the week to Wednesday. Source: Pound Sterling Live.

Ying and the CIBC team noted on Wednesday that market expectations for the eventual top in the Bank of Canada (BoC) cash rate (the ‘terminal rate’ in financial jargon) have fallen this week in sympathy with their U.S. equivalents.

This is notable not only because Canadian economic newsflow has been thin on the ground but also because it wouldn’t be the first time that changes in U.S. economic conditions, or fluctuations in expectations for Federal Reserve (Fed) policy have made themselves felt to the north of the U.S. border. 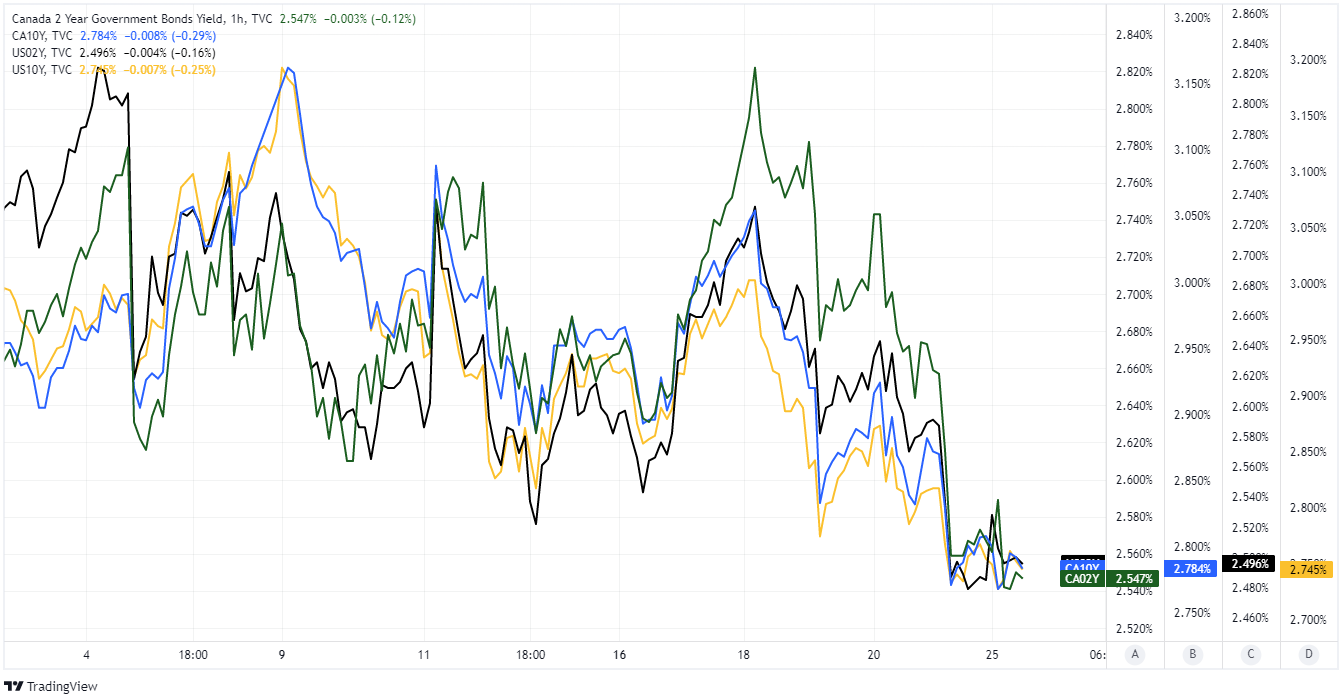 “This spillover effect from US yields into Canada may explain the disparity between our forecasts, which are driven by domestic fundamentals only, and market expectations, which are all encompassing of not only US Treasury spillover, but spillover of other asset prices as well,” Ying and colleagues say.

U.S. government bond yields fell as debt prices rallied this week in what has been a further turbulent period for stock markets across the globe and at least some of this price action followed hard on the heels of signs that parts of the U.S. economy may be cooling faster than was previously thought.

"The core capital goods group of orders (ex. aircraft and defense), which is a leading indicator for business investment in equipment, grew by 0.3% in April, below the consensus expectation for 0.5% growth," says Katherine Judge, an economist and CIBC colleague of Ying.

In addition, there has been a tentative indication that at least some Fed policymakers could be quick in responding to any further such signs by adapting their views on the degree to which U.S. interest rates might need to be lifted in order to rein in elevated inflation rates in the months ahead. 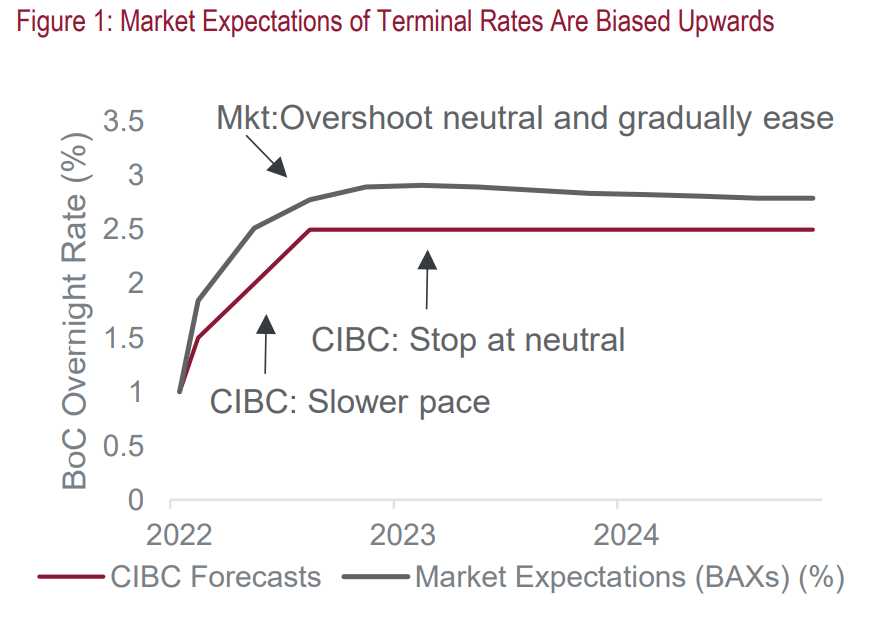 That would potentially mean more spillovers from U.S. bond yields into borrowing costs north of the border with prospective implications for investors’ expectations of the Canadian economy, BoC monetary policy and the Loonie. (Set your FX rate alert here).

“At present, the market is pricing in consecutive 50bps hikes from the Bank of Canada over its next two meetings, in June and July. While we are in line with market expectations over these coming meetings, our forecasts diverge thereafter,” Ying says.

“The market prices in further rate hikes, with 2022 finishing at 2.75%. In contrast, we believe the speed at which policy is delivered will slow down into the fall, and ultimately the Bank will not be able to overshoot the neutral rate, currently estimated at 2.5%,” she adds. 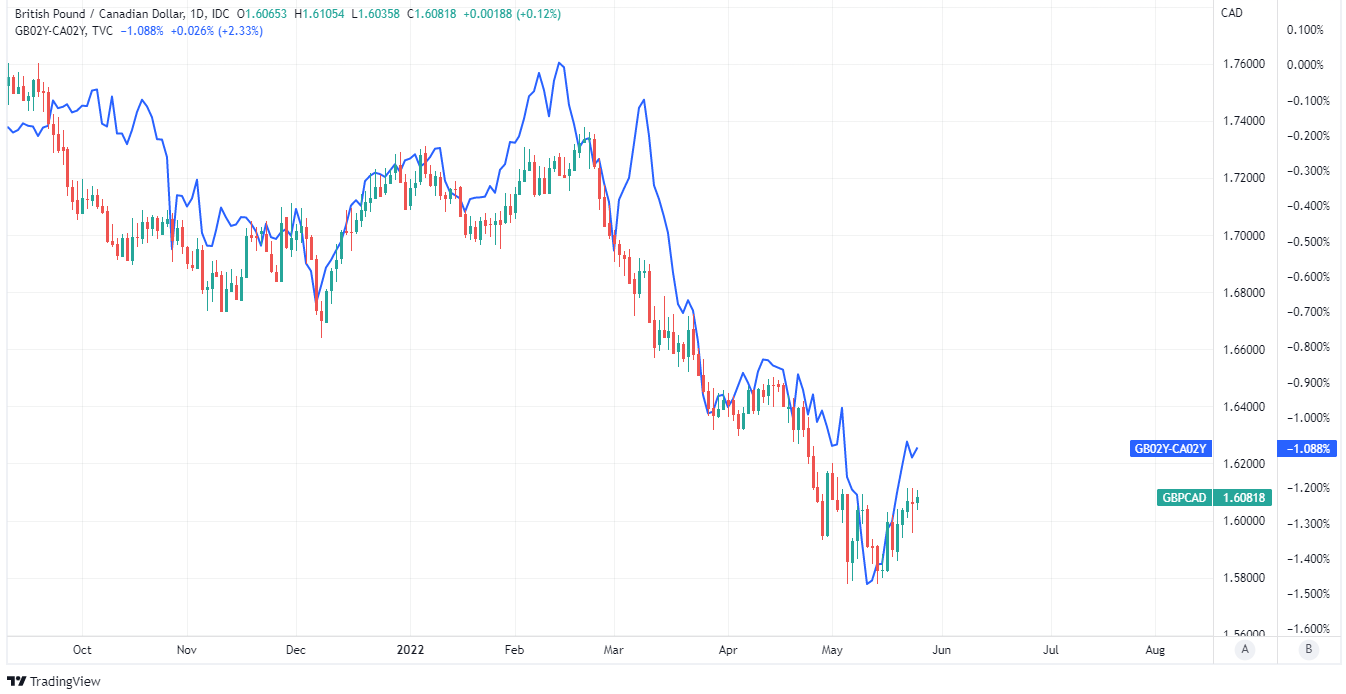 Anything that pulls down expectations for the BoC cash rate would impact Canadian bond yields as well as the spread or gap between those and their UK counterparts, with potentially favourable implications for a Pound to Canadian Dollar rate that some analysts view as being somewhat cheap.

“Technical signals here are finely balanced, however,” writes Juan Manuel Herrera, a strategist at Scotiabank, in a review of GBP/CAD’s chart.

“GBP does, as we have said, still look historically “cheap” and we think signs of a rebound developing need to be monitored closely. Price action may mean better support around 1.58 now but we still think a push above 1.61 is needed to signal more, near-term gains,” Herrera said on Tuesday.