Srategists at CIBC Capital Markets say the Canadian Dollar could be better supported over the medium-term thanks to Canada's strong trade dynamics while analysts at UBS expect the currency stage a recovery as the market prices out a frantic pace of rate hikes at the Federal Reserve.

Statistics Canada data released midweek showed Canada's trade surplus shrank sharply in March when many economists expected that it would rise from C$2.7BN to C$3.7BN.

The March surplus came in at just C$2.5BN, reflecting a sharp fall from an upwardly-revised February surplus of CS3.1BN. 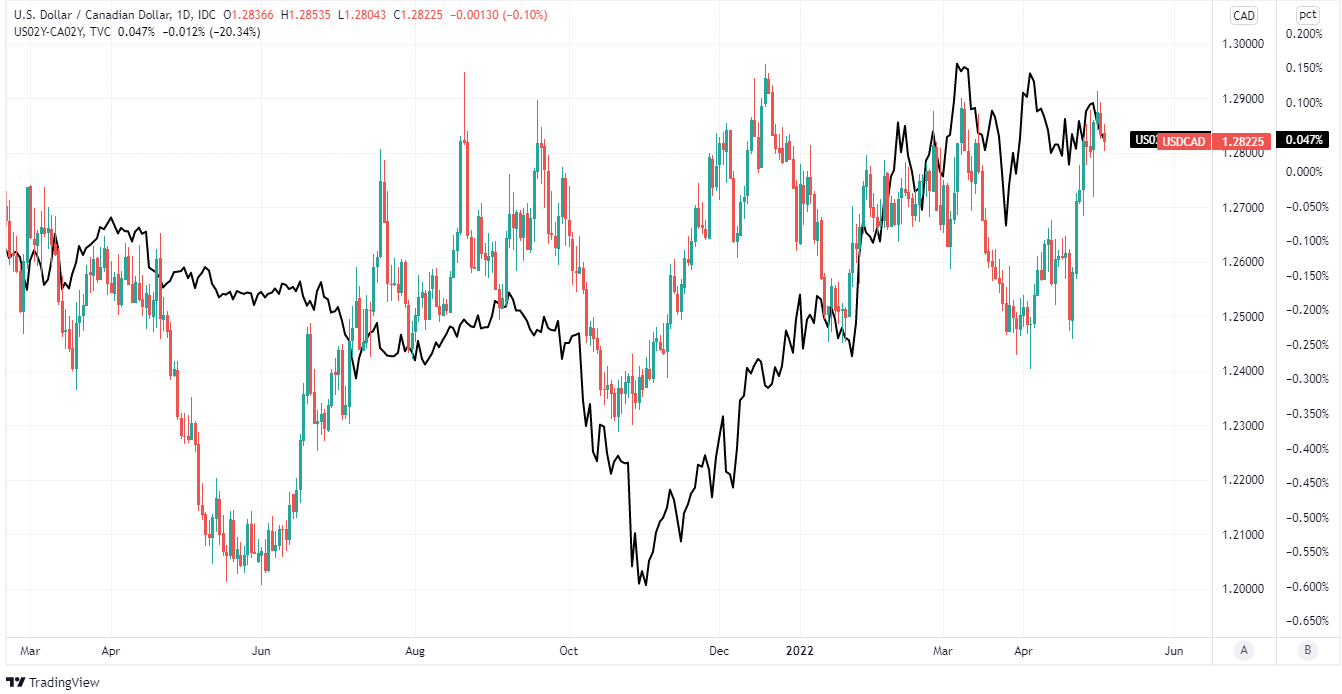 Above: USD/CAD shown at daily intervals with spread - or gap - between 02-year U.S. and Canadian government bond yields. Click image for closer inspection.

"USD/CAD is retracing from recent highs. We’ve held firm in our view that price action should remain contained within the 1.24-1.2950 range of late and we see no sign to deviate from that view for now," Rai also said on Wednesday.

CIBC hold a view that USD/CAD is likely to remain supported within a wide 1.24 to 1.2950 range in the weeks ahead, although the outlook for USD/CAD will also be heavily influenced by Wednesday’s Federal Reserve policy decision.

The Federal Reserve raised interest rates by 50 basis points in line with expectations but Chairman Jerome Powell effectively ruled out any 75 point hikes in the near term.

The decision and guidance were therefore not as 'hawkish' as some market participants were expecting and the Dollar fell in response, releasing pressure on other major currencies such as the Canadian Dollar.

“While the USD should be supported in the short term by the Fed also tightening to contain a hot US economy, we expect cyclical currencies like the loonie to be supported by a pick-up in global growth in 2H22,” says Gaétan Peroux, CFA and an FX strategist at UBS Global Wealth Management.

“USDCAD should settle down to the low 1.20s toward mid-year as the BoC engages in a similar rate path as the Fed, and global growth picks up again,” Peroux and colleagues wrote in a Wednesday research briefing.

U.S. Dollar exchange rates have risen sharply in the last nine months and especially since the middle of April while many analysts continue to expect it to outpace other currencies as the Fed moves at a likely faster pace than others when withdrawing pandemic-inspired stimulus from the U.S. economy.

This and building risks to the global economic growth outlook stemming from Russia’s invasion of Ukraine and the spread of coronavirus containment measures in China explain how USD/CAD came close to 18-month highs last week despite the Bank of Canada (BoC) interest rate stance. 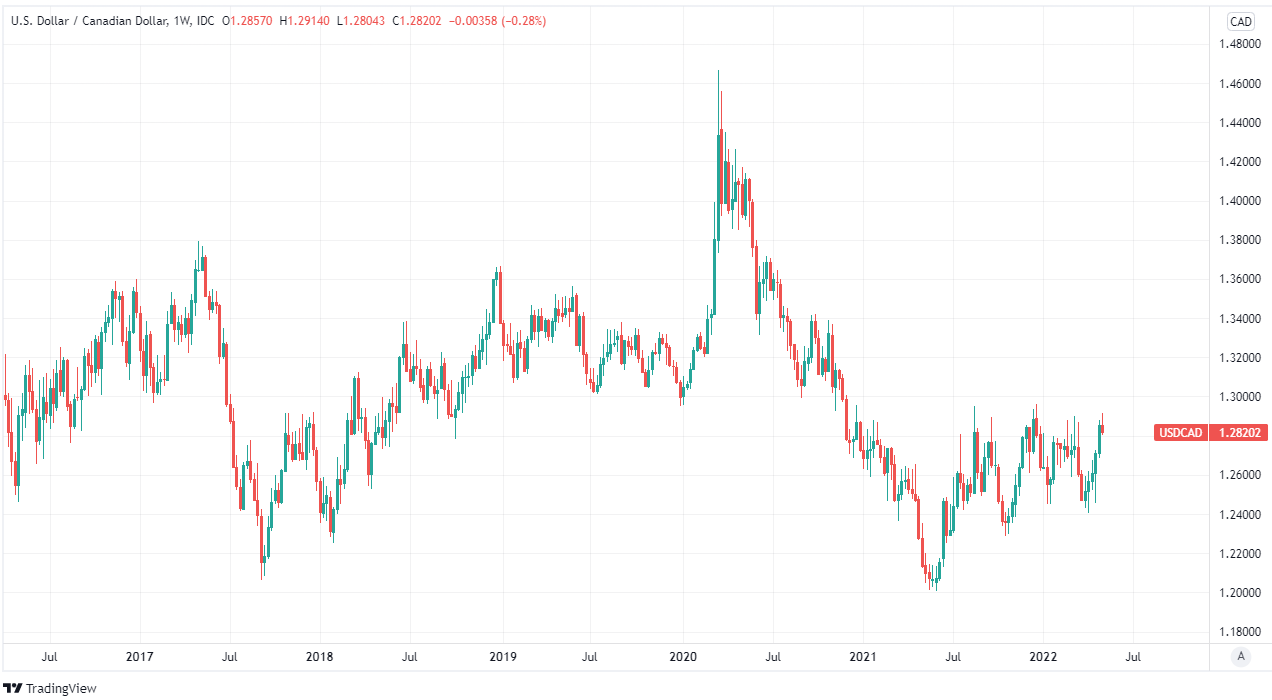 The Bank of Canada is however expected to continue tightening monetary policy, with markets anticipating as many as 200 basis points of hikes over the remainder of 2022.

This could offer support to the Canadian Dollar via the interest rates channel.

“With the Canadian economy starting to overheat, we can’t let demand get too far ahead of supply or we risk adding further to inflation. That is why the Bank has taken concrete and decisive actions,” BoC Deputy Governor Carolyn Rogers told the Women in Capital Markets forum on Tuesday.

The Bank of Canada lifted its cash rate from 0.5% to 1% last month, pulling temporarily ahead of the Federal Reserve and in the process helping to minimise the extent to which recent surges in U.S. government bond yields can burden the Canadian Dollar.

This and the Fed’s recently more ‘hawkish’ policy stance come as both central banks seek to ensure that currently elevated inflation rates do not become entrenched at their current levels, which are in each case three or more times higher than either central bank’s mandated targets.

“The BoC delivered a 50bp rate hike to 1% and announced it would begin shrinking its balance sheet. The central bank also raised its estimate for the neutral rate by 25bp to 2.5%, giving it more scope for further tightening down the line,” says Daragh Maher, U.S. head of FX research at HSBC.

“On 20 April, the CAD gained 0.9% after March Headline CPI surpassed expectations for 6.1% y-o-y at 6.7%, reinforcing expectations for the BoC to continue with aggressive rate hikes. USD-CAD began to revert higher towards the end of April on broad USD strength, weak risk appetite, and a rebound in Brent price,” Maher and colleagues also said in a Tuesday review of the Canadian Dollar’s April performance.