The Pound to Canadian Dollar exchange rate recovery from early December’s lows stalled early in the new week although the outlook for it would remain favourable so long Sterling holds above 1.7085, according to technical analysis from Scotiabank.

Sterling benefited throughout much of December from a strong recovery against Canada’s Loonie but the Pound to Canadian Dollar rate has this week slipped back beneath 1.72 after a choppy start to the new year culminated in a brief foray above 1.73 last Thursday.

This latest setback may reflect only a mere consolidation within a broader uptrend, however, and price action over the remainder of this week is likely to provide an indication of whether or not that is the case.

“GBPCAD price signals are turning a little mixed as the pound struggles for a stronger sense of direction above 1.71. We still rather think this is a bullish development for the cross and continue to look for the GBP to push on towards the 1.75/1.76 range (the top of the broader sideways range in place last year),” says Juan Manuel Herrera, a strategist at Scotiabank.

“However, weak price action last Thursday left a bearish candle print on the daily chart (“dark cloud cover”), just a little above the late Dec high. Weakness below the 1.7085 point—the intervening low between these two highs—will signal a deeper setback for the GBP may be developing,” Herrera and colleagues said in a Monday review of the Pound to Canadian Dollar rate’s charts. 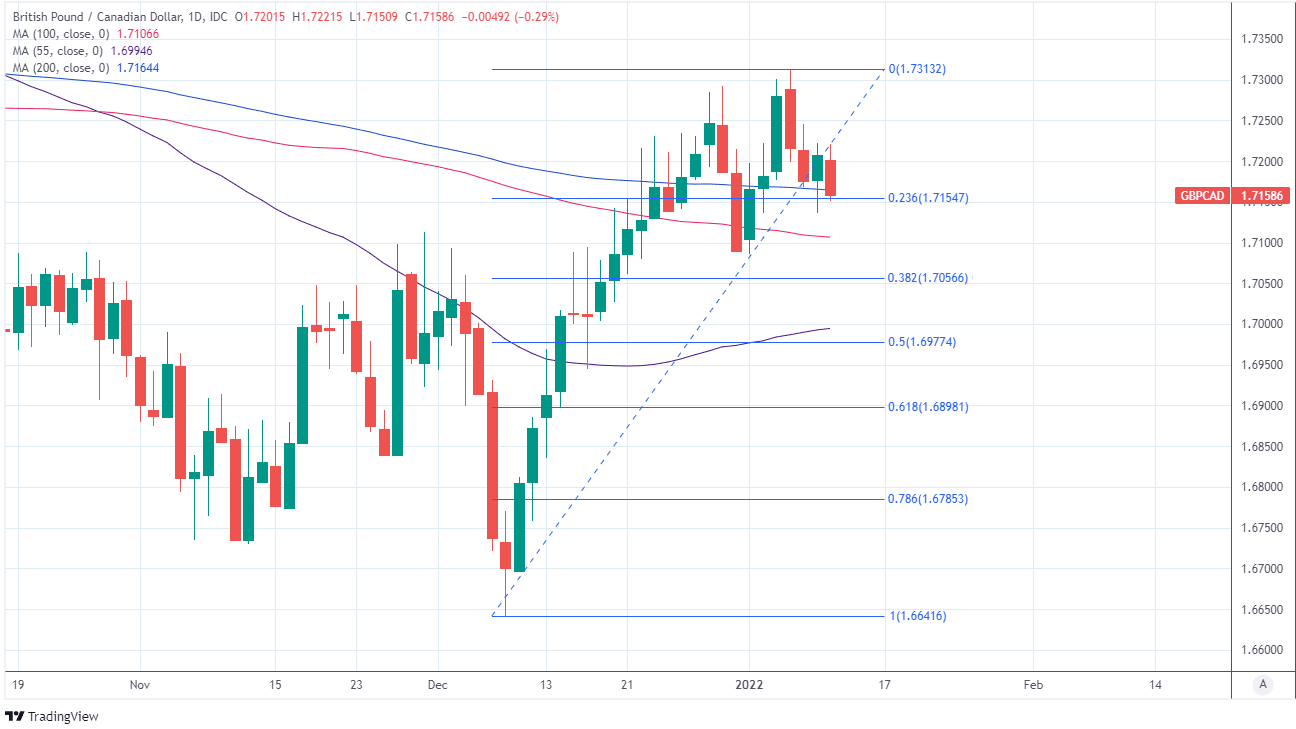 Above: GBP/CAD shown at daily intervals with major moving-averages and Fibonacci retracements of December recovery indicating some of the likely areas of technical support for Sterling in the event of a further setback.

Herrera and colleagues said on Monday they would retain a bullish short-term outlook for Sterling while the 1.7085 “intervening low between these two highs” remains intact, referencing an area around which the Pound could potentially benefit from other thresholds of support.

Included among these other prospective levels of support is the 23.6% Fibonacci retracement of December’s recovery, located near 1.7054, and Sterling’s 100-day moving-average that was sitting at 1.7106 on Tuesday.

But away from the charts, some analysts at other firms are doubtful that the Pound to Canadian Dollar rate will be able to avoid a deeper setback.

“While we officially expect April lift-off, we acknowledge that the January BOC meeting is live. We think the BOE curve is already reasonably priced (including nearly a full hike in February, which we expect),” says Mazen Issa, a senior FX strategist at TD Securities.

“GBP was also one of the biggest outperformers vs. CAD in Q4, so we think the good news is already in the cross. We expect energy prices to be supported as we enter the winter,” Issa and colleagues said in a research briefing on Tuesday.

Issa and TD Securities colleagues advocated last Friday that clients of the bank bet on a decline to 1.68 by the Pound to Canadian Dollar rate over a one-to-two month horizon, but warned they would abandon the idea on any recovery back to 1.7480 or above.

The bearish call came in the wake of data revealing that more Canadians were employed in the labour market than before the pandemic and that overall unemployment had fallen close to pre-pandemic levels, potentially opening the door to a January interest rate rise from the Bank of Canada (BoC).

“After slogging it in Q4, we think risk/reward has turned in the CAD's favor. We think it is prudent to assume the BoC offers 'earlier mover advantage,” says TD’s Issa and colleagues. 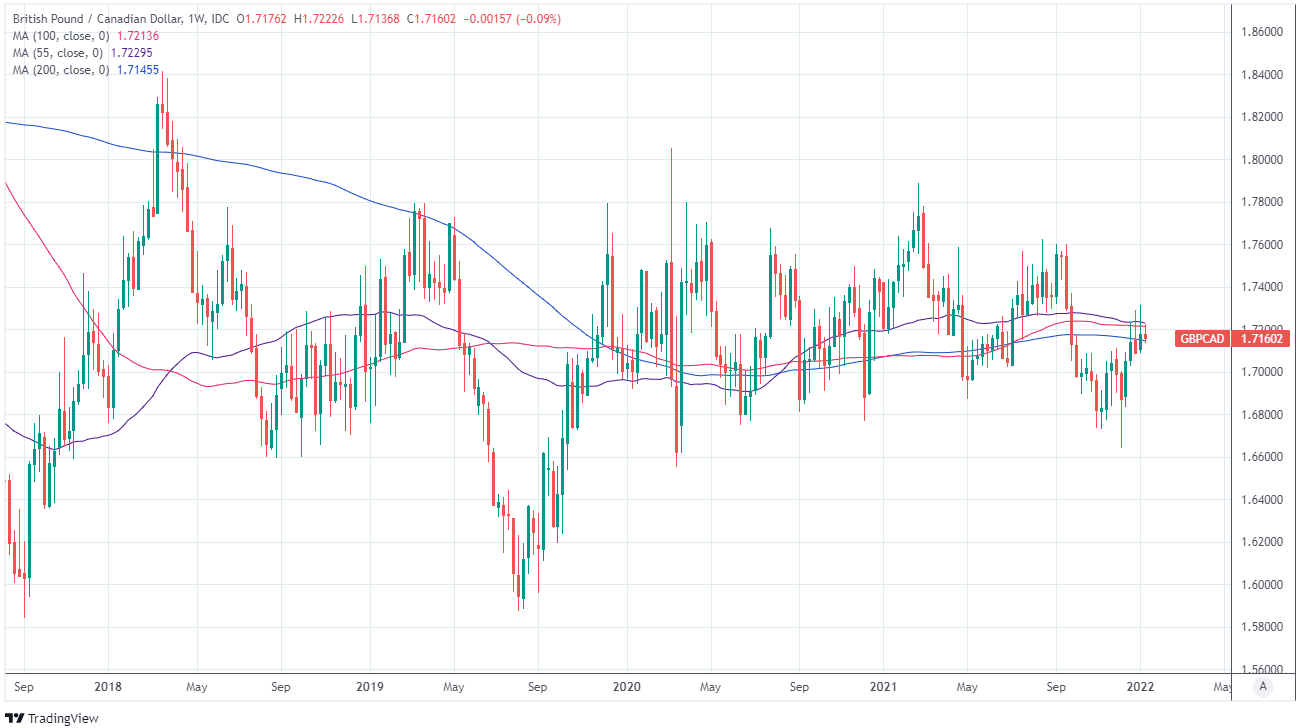 Above: GBP/CAD shown at weekly intervals with major moving-averages. Shows Sterling facing resistance from 100 and 55-week averages while oscillating around its 200-week moving-average.