The Pound-to-Canadian Dollar rate entered the new week near 2021 lows and facing an uphill struggle to recover in the absence of a let up from a rampantly strong Canadian Dollar or boost from the Bank of England (BoE) this Thursday.

Sterling crumbled under pressure from a double-barreled barrage of Canadian and U.S. Dollar strength last Friday when simultaneous declines in USD/CAD and GBP/USD dragged the Pound-to-Canadian Dollar rate below 1.70 for the first time this year.

Canada’s Dollar outperformed in all weathers, pushing USD/CAD to its lowest since January 2018 even as the U.S. Dollar surged, making double-trouble for GBP/CAD.

“We could see some profit-taking curbing further upside in the short term, but in the medium term the widening CAD-USD rate advantage thanks to the hawkish BoC (and so far unchanged stance by the Fed) along with a still solid domestic recovery narrative in Canada all point at further downside risk for USD/CAD,” says Francesco Pesole, a strategist at ING.

Any corrective move higher in USD/CAD this week would automatically lift GBP/CAD, especially if it coincides with a recovery for the main Sterling exchange rate GBP/USD, although this would do little to alter the Loonie’s burgeoning appeal to investors. 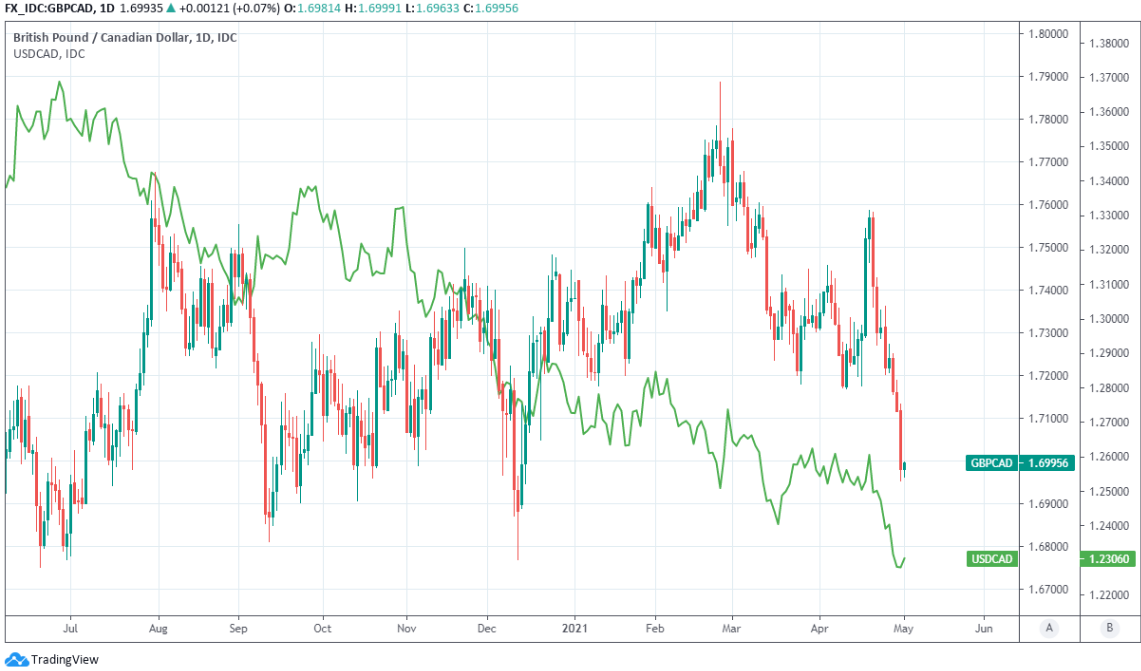 Above: Pound-to-Canadian Dollar rate at daily intervals with USD/CAD.

This leaves much about the GBP/CAD outlook hinged on whether Sterling is given reason for cheer by the Bank of England this Thursday.

“Canada has continued to ramp up its vaccine roll-out, now vaccinating as many people as the UK and US every day (on a per-capita basis). This continues to add fuel to the strong recovery story in the Canadian economy, with investors now expecting restrictions to be lifted earlier than previously,” ING's Pesole says.

Buoyant oil prices, a resilient if-not strong economic performance and new Bank of Canada (BoC) policy guidance are among the bullish factors that have gotten Pesole and the ING team looking for USD/CAD’s decline to reach 1.20 by year-end.

This would be the Canadian Dollar’s best since 2015 and a high bar for GBP/CAD to avoid further losses GBP/USD would need to return to at least 1.41 to prevent the Pound-Canadian Dollar rate from falling below Monday’s 1.6980 in any market where USD/CAD is at 1.20.

“A drop to 1.20 looks an even stronger probability from here and, depending how weak the USD trades over the summer, a decline into the high teens cannot be excluded as a risk,” says Shaun Osborne, chief FX strategist at Scotiabank.

Investors enthusiasm for the Canadian Dollar is a burden although GBP/CAD would be helped if on Thursday the Bank of England followed in the footsteps of the BoE with upgrades to its outlook for UK economic growth and inflation.

Last month investors were cheered when the BoC indicated that it might be willing to entertain a higher cash rate around the middle of next year or soon after, citing better-than-expected outcomes in the first quarter this year.

“The BoC is clearly not afraid of signalling rate hikes well ahead of the Fed’s own plans and encouraging a stronger CAD,” says Lee Hardman, a currency analyst at MUFG. 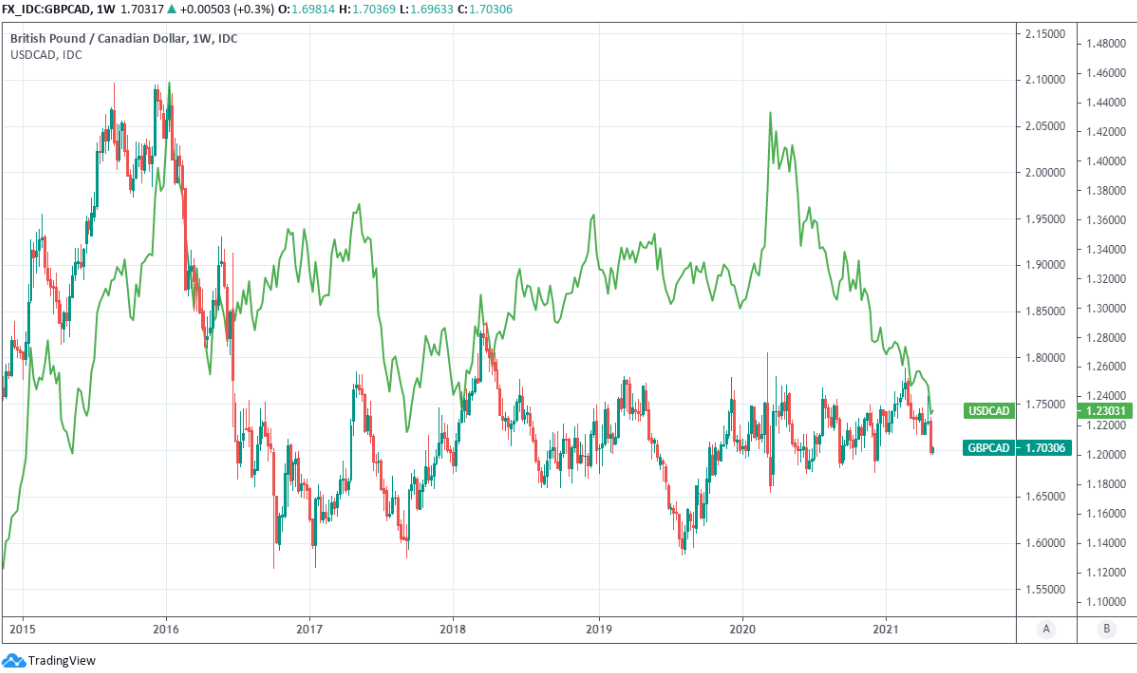 Above: Pound-to-Canadian Dollar rate at weekly intervals with USD/CAD.

With global market factors aside the main event for the Canadian Dollar this week is Friday’s April jobs report, which is due out at 13:30 and alongside last month’s non-farm payrolls report from the U.S., while for Sterling all eyes are on the BoE.

The BoE is widely expected to leave Bank Rate unchanged at 0.10% and the £895bn target for its quantitative easing programme in place although investors will pay especially close attention to the Bank’s inflation forecasts now that supposedly non-essential parts of the economy are in the process of reopening.

Any suggestion that the 2% target could be sustainably met sooner than was anticipated would likely be taken as an indication that interest rates might also rise sooner, which would be supportive of the Pound.

The Pound-to-Canadian Dollar rate would rise to 1.73 this week if GBP/USD succeeds at retesting 1.40, as is envisaged by Scotiabank’s Osborne and colleagues, although it would lose momentum beyond there without a sustained climb by USD/CAD.

“Cable remains on a modest upward trend with three straight weekly gains and an eye to test the 1.40 level in the coming days if the current trajectory holds,” says Scotiabank’s Juan Manuel Herrera in a Friday note.