The Canadian Dollar climbed to new multi-year highs ahead of the weekend and in the process pushed the Pound-to-Canadian Dollar rate to its lowest level of the year-to-date, with price action coming amid choppy trading in U.S. exchange rates and a tentative outperformance by American stock markets.

Canada’s Dollar was the only major currency to score against the U.S. Dollar on Thursday as the greenback pared some of its earlier declines against many currencies including after the release of first-quarter U.S. GDP data.

The Loonie’s gains pushed USD/CAD below the 1.23 handle for the first time since January 2018, while Canadian currency strength pushing GBP/CAD beneath 1.7150 for a time, in the process threatening to bring about a second consecutive session spent beneath Sterling’s recent range floor around 1.72.

“Canada last week further tapered its bond buying program, a step the Fed still isn’t considering yet as it demands that the U.S. economy make ‘substantial further progress’ before pulling back on economic support. Buoyant commodities and evidence of a consumer-led recovery in Canada validated the loonie’s surge to February 2018 highs against the greenback,” says Joe Manimbo, a currency strategist at Western Union Business Solutions. 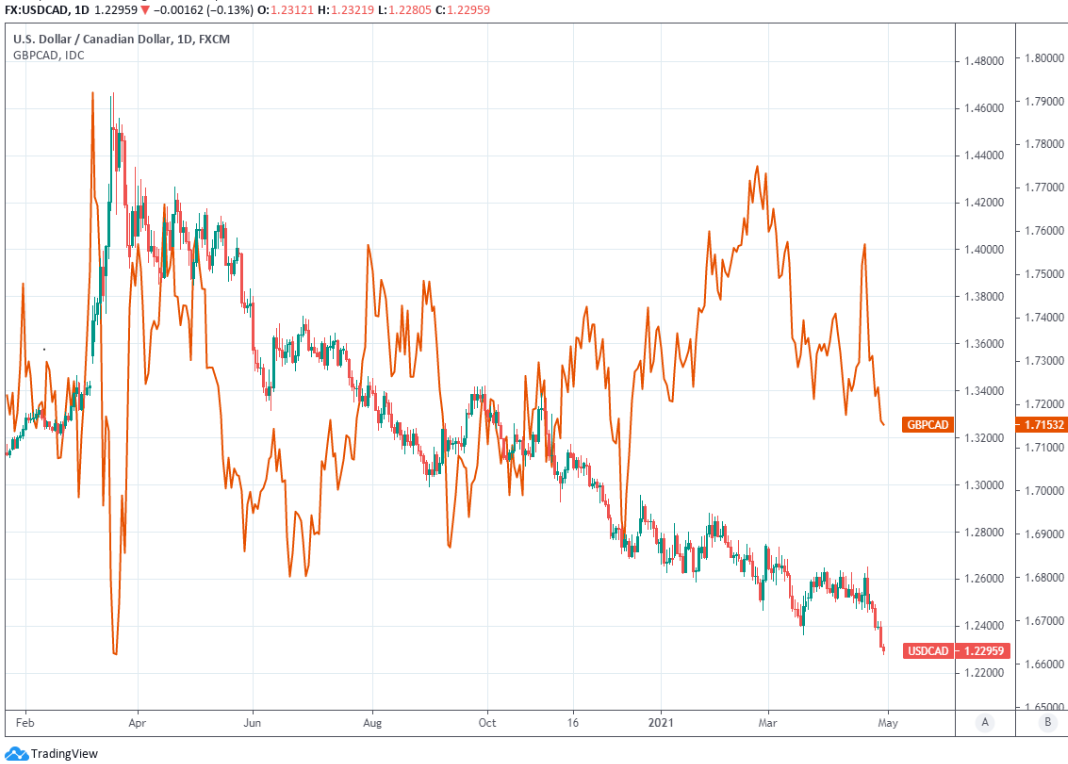 Above: USD/CAD shown at daily intervals alongside Pound-to-Canadian Dollar rate.

North American stock markets were also outperformers with Canada’s TSX Composite rising to 19,325, in the process lifting it to a 10.49% 2021 gain, while most major U.S. stock indices were also seen higher for the session as well as week.

Price action followed confirmation from the Bureau of Economic Analysis across the border that U.S. economic growth picked up sharply last quarter, while coming hard on the heels of Wednesday’s March retail sales report from Statistics Canada.

The latter suggested consumers dug deep into their wallets and purses for retail goods at the end of the first quarter, emphasising in the process how many earlier forecasts for the domestic economy were too downbeat including at the Bank of Canada (BoC).

“Put simply, spot markets don’t care about BoC/Fed pricing at this point (ergo the premium in CAD from front-end spreads). The simple and digestible message is that one central bank is tapering and the other isn’t,” says Bipan Rai, North American head of FX strategy at CIBC Capital Markets.

"At some point, we suspect the focus will turn to why anyone would think that a BoC hike in summer 2022 makes sense… but that time is not now," Rai says.

Rai and the CIBC team say USD/CAD is likely to test 1.2250 in the short-term before sliding toward 1.2065 over the coming months after having broken beneath a key technical landmark around 1.2360 in overnight price action heading into Thursday.

That price action came when the Federal Reserve at least appeared to get its message across to the currency market after saying U.S. policymakers would want to see “a string” of blockbuster non-farm payrolls reports need to be seen before policymakers are willing countenance even beginning a mere discussion about slowing the pace of U.S. government bond purchases. 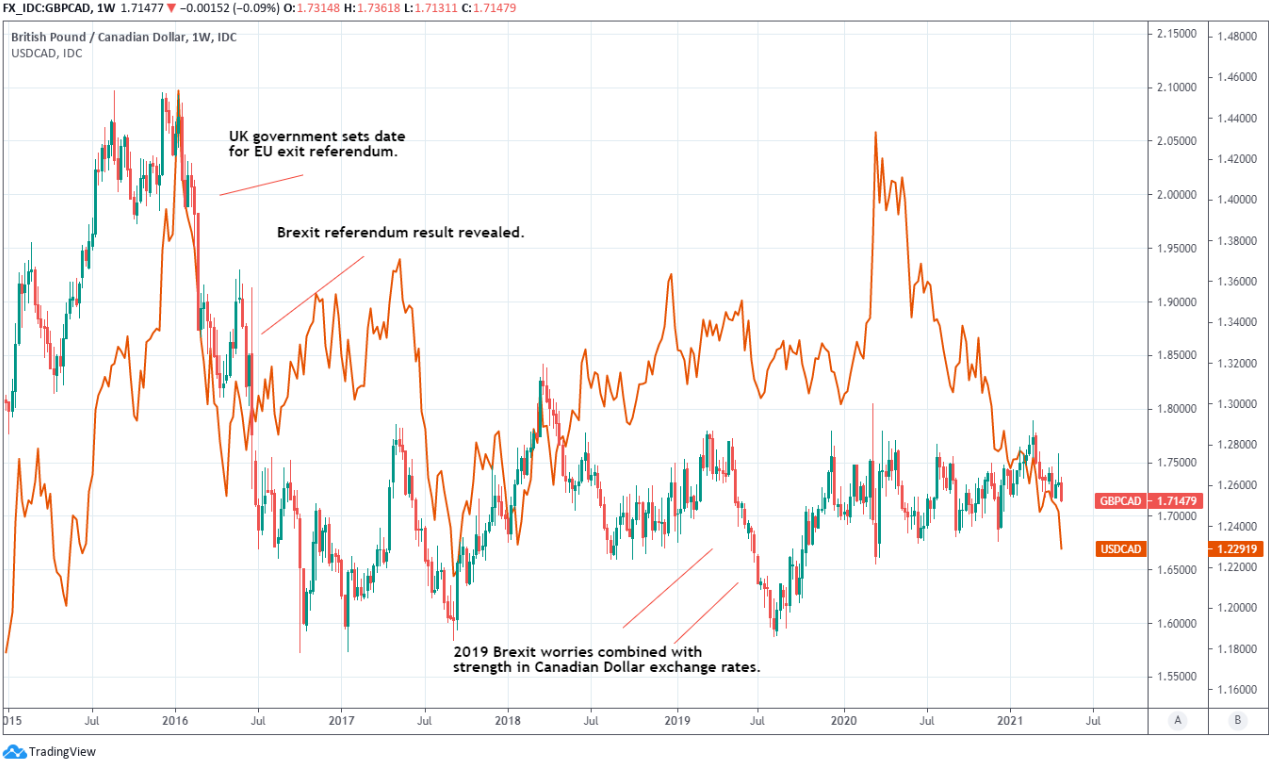 Above: Pound-to-Canadian Dollar rate shown at weekly intervals alongside USD/CAD.

The latter rules out U.S. interest rate rises at least for the foreseeable future, while the Bank of Canada has recently indicated that it could potentially consider lifting its own cash rate from the current 0.25% as soon as the middle of next year, which is the point when Canadian rate setters see their inflation target as likely to have been sustainably achieved.

A USD/CAD fall to 1.2065 would be a bearish omen for the Pound-to-Canadian Dollar rate in the absence of further gains for Sterling’s main exchange rate, GBP/USD, as the latter would need to rise from 1.3950 to 1.4220 under such a scenario simply for GBP/CAD to avert further declines.