The Canadian Dollar remained the week’s outperformer after March retail sales figures emerged stronger than was expected on Wednesday, vindicating the Bank of Canada's recently optimistic view of the country’s economic prospects ahead of an important Federal Reserve policy update.

Canada’s Dollar held at January 2018 highs against the greenback after Statistics Canada said that retail sales rose by 4.8% last month, more than reversing the -1.% contraction seen in February while overshooting the already-respectable 3.5% gain anticipated by economists.

Sales rose in nine out of eleven retailing sub-sectors, led by motor vehicles and parts sellers, although the core retail sales metric was also equally as strong in March. 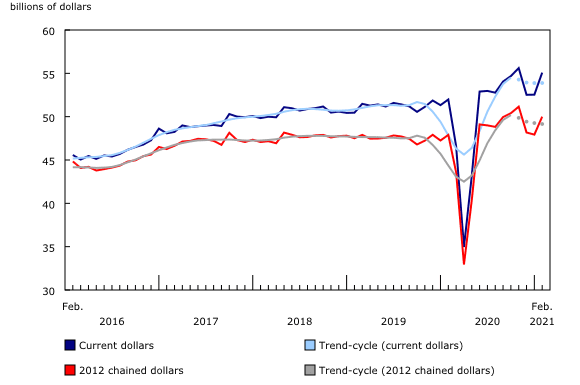 Core retail sales, which ignore sales of cars because of the distorting impact their large ticket prices have on underlying trends, also rose by 4.8% last month although this particular category had only been expected to rise by 4%.

The figures suggest Canadian consumers at least were in rude health last month and at the end of a quarter in which much data indicated that Bank of Canada (BoC) policymakers had been too downbeat previously on the economy’s prospects.

“Some of the increase in February and March might just reflect sales migrating back towards bricks and mortar stores and away from some of the large online merchants which are not captured in this report,” says Royce Mendes, an economist at CIBC Capital Markets.

Mendes and the CIBC team note that coronavirus related restrictions were tightened in Canada this month while a new ‘lockdown’ was imposed in Ontario, the country’s largest province, this month and could be likely to see sales and other figures disappoint for April and May.

Canada’s economy did however prove to be more resilient to earlier tightening of restrictions than was expected in the first quarter of the year, which is why the BoC upgraded its expectations for growth just last week and even hinted that an interest rise could be seen by mid-2022.

The BoC’s April indication that the cash rate could be lifted from 0.25% next year has placed it on course to begin normalising its policy settings according before even the Federal Reserve (Fed) across the border, which partly explains the Canadian Dollar’s nascent outperformance.

USD/CAD fell to its lowest level since January 2018 this week while the Loonie has laid claim to the top spot in the major currency performance table for 2021, behind only the Norwegian Krone, which is backed by a central bank that is expected to lift its own interest rate before the current year is out. 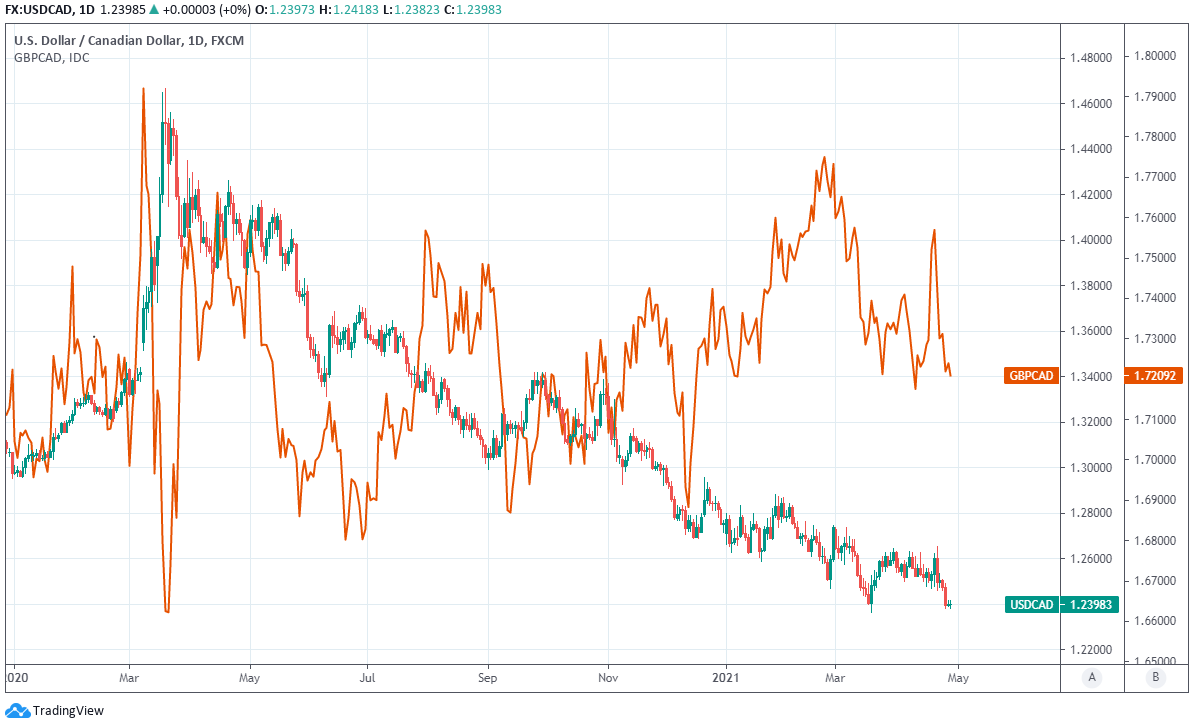 “It was certainly helpful for one of our key calls for Q2, which was for a USD/CAD decline to 1.2260,” says Shahab Jalinoos, head of FX strategy at Credit Suisse, who sees a lot of recent Canadian economic outperformance resulting from the ”the wave created by U.S. growth.”

The Loonie was one of the top performing major currencies of the session on Wednesday and the outperformer for the week but with the Fed set to announce its April interest rate decision in the overnight hours, the Loonie could be susceptible to any impact on the greenback.

Fed policymakers have been at pains to stress since last summer that they do not intend to raise interest rates until American inflation has exceeded their target level for an unspecified period of time, and have maintained that it’s too early to taper off their quantitative easing programme.

The Fed’s policy stance is a negative omen for the returns paid by U.S. government bonds and also for the U.S. Dollar, although financial markets have attempted to call U.S. policymakers' bluff thus far in 2021 and much about the short-term outlook for both currencies now rests on if the bank can convince investors this Wednesday that it means business. 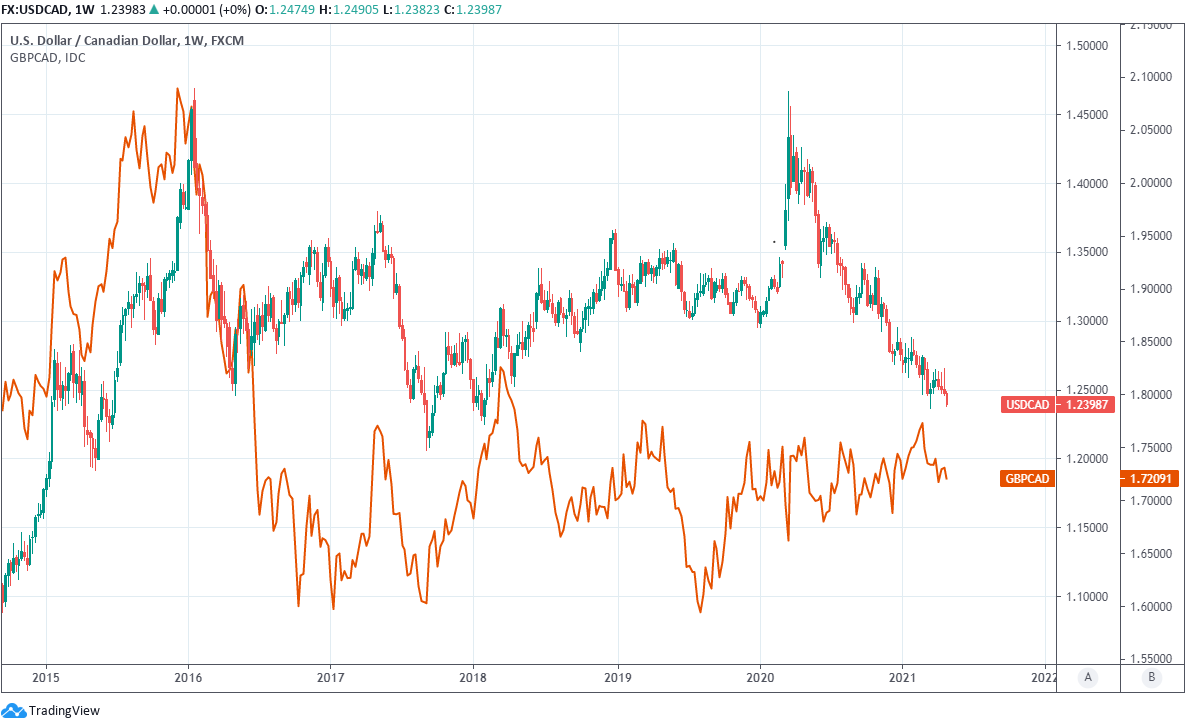 Above: USD/CAD shown at weekly intervals alongside GBP/CAD.

If the Fed does succeed in convincing markets that its current ultra accommodative U.S. monetary policy settings are here to stay for some time yet, and that they won't be reversed easily at any point this year or next, then it could upend the U.S. Dollar.

That would in turn likely pose as at least a temporary headwind to the Canadian Dollar as it is often observed being pulled higher or lower alongside its larger North American neighbour for brief periods wherever there is a trend change in the greenback.

And with the Canadian Dollar already at multi-year highs against the greenback, while having pushed other currencies lower in recent weeks, it may be especially susceptible to such an effect over the coming days if-not weeks.

The Federal Reserve decision is due out at 19:00 London time on Wednesday while Canadian GDP data for the month of February is due out on Friday at 13:30.