The Pound-to-Canadian Dollar exchange rate (GBP/CAD) rose at the opening of a week in which the prevailing trading range could be seen shifting higher as Sterling navigates a raft of economic data and the Loonie takes some time out for the Bank of Canada’s big day.

Pound Sterling saw a strong start to the new week when it rose against all majors other than a handful of commodity currencies, although it had little trouble recovering previously lost ground from the Canadian Dollar, which navigates an action packed domestic calendar amid a broad U.S. Dollar downturn this week.

Canada’s Dollar will have to take account this week of the government’s 2021 budget and an all-important monetary policy decision from the Bank of Canada (BoC) on Wednesday, where rate setters are widely expected to set out plans for aligning the bank’s monetary policy with an evolving economy.

Economic data from Canada has in recent months been far stronger than either the BoC or markets had anticipated, elevating the country near to the top of the major economy league table, while the BoC is generally perceived as having mounted the most aggressive response to the coronavirus crisis of all comparable central banks.

That aggressive response has the BoC on course to own more than half the Canadian government bond market by year-end if its quantitative easing programme is continued at the current pace, a development that is undesirable for policymakers because of the adverse impact it could have on "market functioning."

This particular motivator may be under-appreciated by Canadian Dollar bulls, some of whom may have instead interpreted a pending tapering of the BoC’s C$4BN per week quantitative easing programme as a demonstration of ‘hawkish’ pedigree and so may be susceptible to disappointment this Wednesday at 15:00.

"Canadian data surprises have also outstripped the US in recent weeks as well. It seems possible, however, that a tapering decision could be accompanied by a reiteration that the economy still needs extra-ordinary policy support and some messaging on closing the output gap that conveys clearly that rate hikes are still a long way off," says Shaun Osborne, chief FX strategist at Scotiabank, who sees USD/CAD trading in a rough 1.24-to-1.26 range this week. 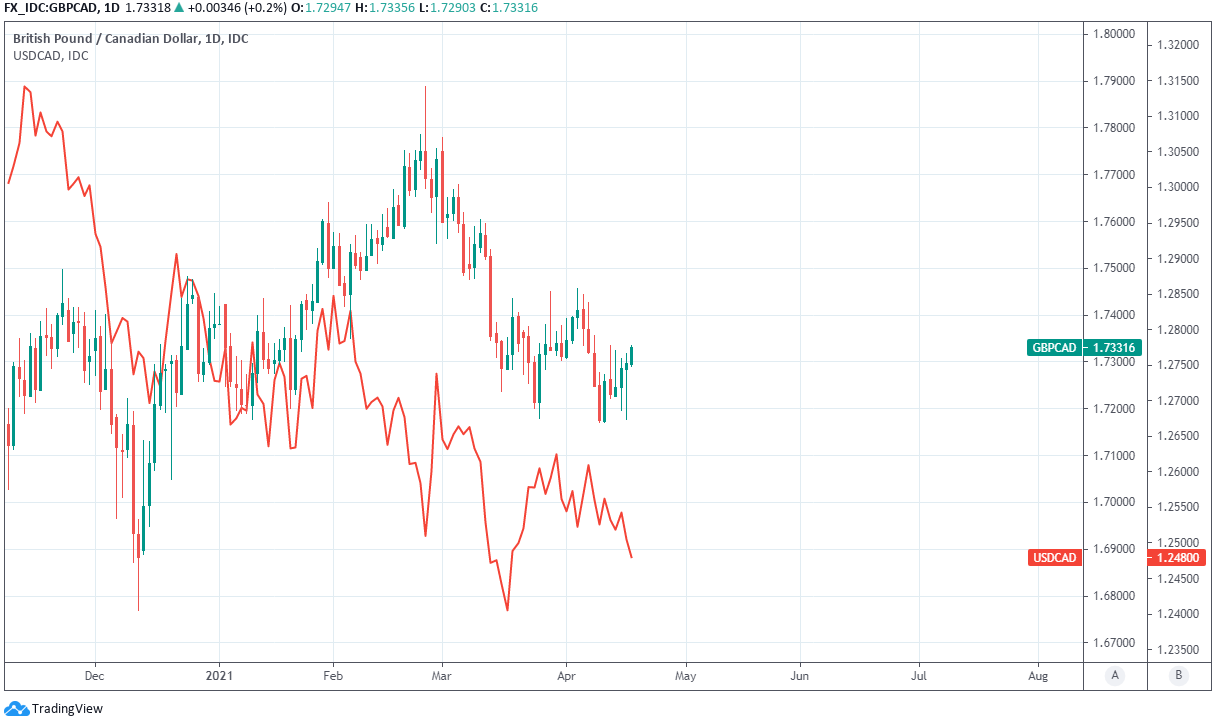 Above: GBP/CAD at daily intervals with and USD/CAD (red).

The latter always closely reflects the net performance of GBP/USD and an inverted USD/CAD.

At the midpoint of the above USD/CAD range, Sterling would be found trading between 1.7250 and 1.75 against the Canadian Dollar in the absence of a deviation by the main British exchange rate GBP/USD from a 1.38-to-1.40 trading band.

The GBP/CAD rate was trading around 1.7350 and in the lower half of that 1.7250-to-1.75 range on Monday ahead of Canada’s 2021 budget, which is expected to be unveiled late in the European afternoon after which the UK economic data calendar comes alive for the week.

Keep an eye out for UK inflation data on Wednesday and PMI data out on Friday.

“We expect the PMIs to have rebounded sharply in April, as lockdown restrictions were eased further. Otherwise, we think that that CPI inflation rose from 0.4% y/y to 0.7% last month, while the unemployment rate held steady at 5.0% in February as the furlough scheme continued to absorb most of the impact on the labour market of the third lockdown,” say Melanie Debono and Kieran Tompkins at Capital Economics.

It may be highly pertinent that GBP/CAD’s strong start to the week and the Loonie’s underperformance, which was observed even against directly comparable commodity currencies like the Australian and New Zealand Dollars, comes as U.S. Dollar exchange rates rollover following three months of strong performance from the greenback.

The Loonie benefited in recent months not only from strong economic data, which may be liable to soften as a third wave of infections and the resulting containment measures spread across the country and economy, as it also enjoyed a bid that was in part motivated by Canada’s location on the doorstep of a stimulus-pumped U.S. economy.

Potentially for connected reasons, the Canadian Dollar is often observed outperforming other currencies or underperforming concurrently with the U.S. Dollar.

“Despite the generally supported sentiment for commodity currencies and oil rallying, CAD was the worst performing currency in G10 after the dollar last week,” notes Francesco Pesole, a strategist at ING.

"We suspect that the Bank will not exceed consensus expectations considering the worsening contagion situation in Canada and the not-so-fast vaccination roll-out. This may leave CAD still vulnerable to the worsening domestic story," he adds. 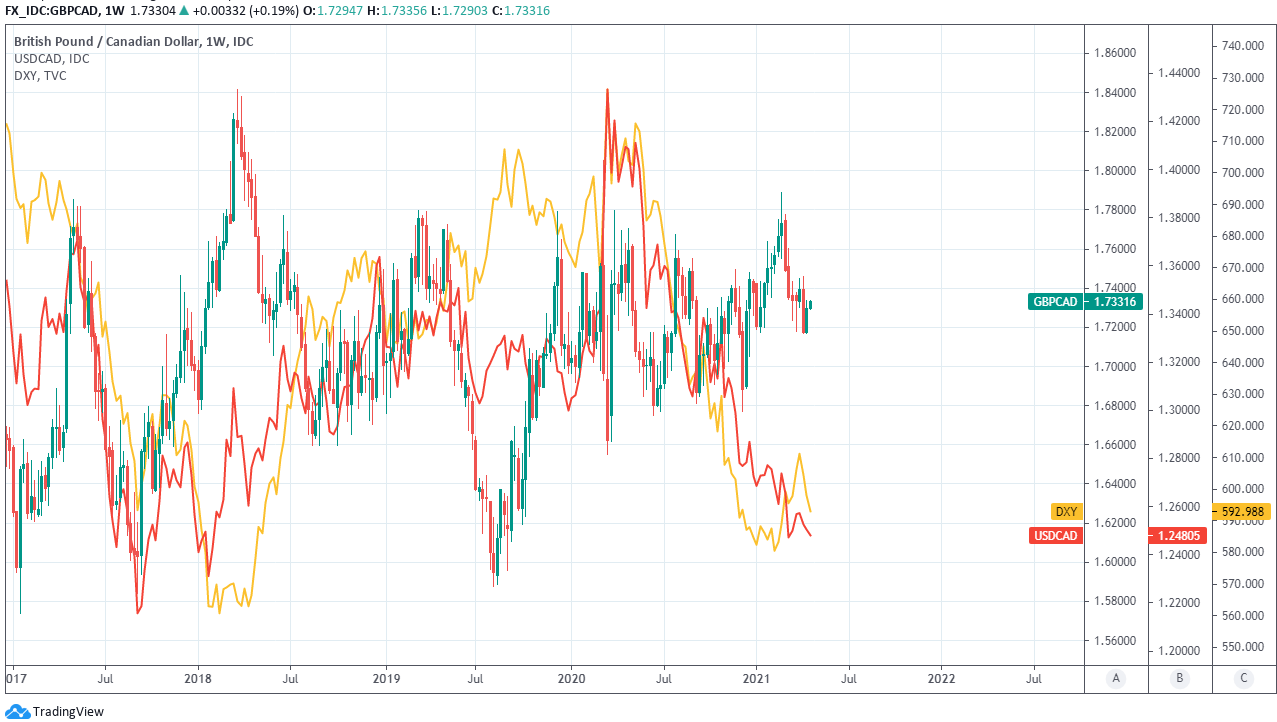 Above: GBP/CAD at weekly intervals with U.S. Dollar Index (yellow) and USD/CAD (red).