The Pound-to-Canadian Dollar rate was near the top of its recent range on Tuesday but may struggle to extend above it ahead of Canada's latest employment report due out on Friday, which could impact market expectations for this month's Bank of Canada (BoC) monetary policy decision.

Sterling underperformed all other major currencies on Tuesday after a strong start to week in the prior session and what was public holiday trade for many countries, while the Canadian Dollar was also seen close to the bottom of the table, alongside other commodity currencies.

The Pound-to-Canadian Dollar rate was trading around its breakeven level for 2021 as Sterling and the Loonie continued vying with each other for the top spot in the major currency performance table for the year-to-date, although the balance of risk may be tilted toward the downside for the coming days.

"The loonie should continue to benefit from the broader North American recovery in the coming month, but at some point we’re going to have to reckon with the fact that interest rate futures markets have the BoC mispriced relative to the Fed. Indeed, we see little scope for the BoC to tighten ahead of the Fed when push comes to shove," says Bipan Rai, North American head of FX strategy at CIBC Capital Markets. "That forms the bedrock of our view that USD/CAD will head higher in H2 2021 towards 1.30."

Canada's jobs data is due out at 13:30 this Friday and will be scrutinised closely by the market given that recent BoC communications have led investors to believe the bank could be first in the developed world to stop injecting monetary stimulus into the economy by ending its quantitative easing programme. 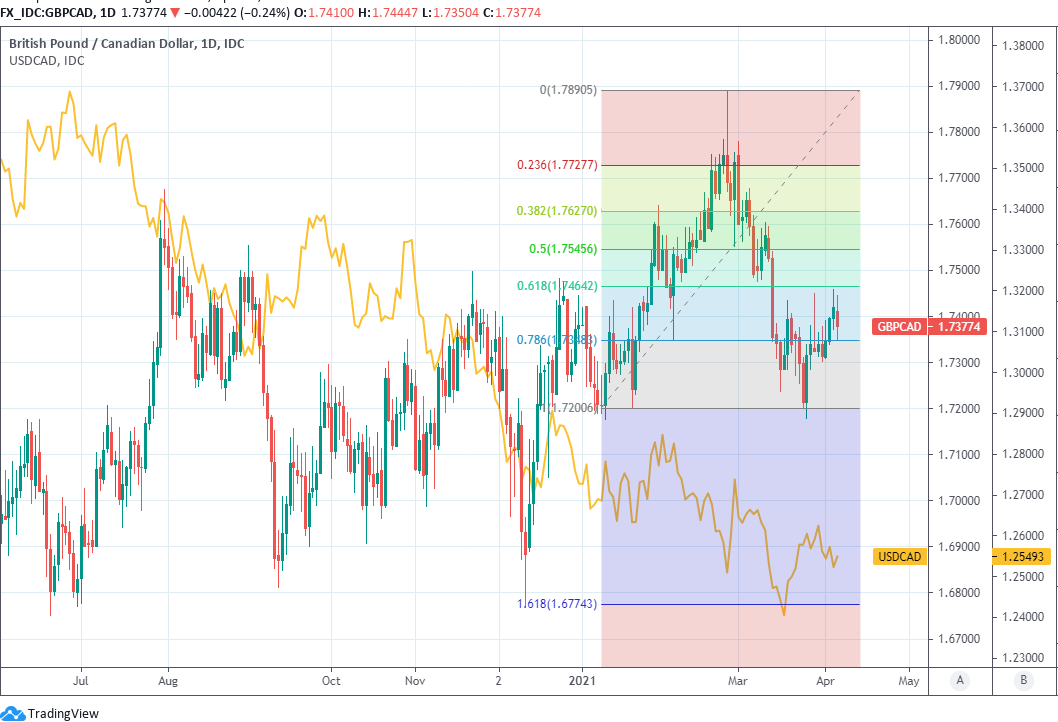 Above: GBP/CAD shown at daily intervals with Fibonacci retracements of 2021 rally and USD/CAD (yellow).

The data will come just days after U.S. job numbers blew expectations out of the water with 916k positions either created or simply recovered from the coronavirus, far more than the 652k anticipated and nearly twice the upwardly-revised 468k seen in the prior month.

"We think the CAD can hold up relatively well ahead of the employment data Friday (the street is looking for a 100k gain in jobs, which would compare well with the solid rise in US jobs for March)," says Shaun Osborne, chief FX strategist at Scotiabank. "Shorter-term trend studies are neutral, suggesting choppy and somewhat direction-less range trading will persist for now. We note that longer-term trend indicators are still oriented bearishly for the USDCAD, which should keep the USD better offered overall."

There's a number of reasons why the BoC is tentatively expected to reduce the amount of government bonds it buys each week on April 21 including Canada's economic resilience and fact that it would develope too large a footprint in the government bond market before long if it doesn't make some adjustments.

The BoC would own more than 50% of all outstanding Canadian government bonds before year-end if it continued buying "at least C$4bn per week" until then, which would risk impairing market functioning and is likely the main reason why the BoC has already curtailed its weekly purchases once previously, from C$5bn per week in October.

But while adjustments may be motivated by technical factors before anything else, they would also be a sign of confidence in Canada's recovery prospects, coming at a point certain financial markets are indicating that investors think the BoC could lift its interest rate as soon as next year. That would make Canada first in the developed world to lift rates, which would be a boon for the Loonie, while Friday's job figures are the last piece of important data that BoC policymakers will be given to work with ahead of April 21.

This means the data could impact Canadian exchange rates more than is usually the case and especially in the event of a disappointment which, when combined with the sparsity of the UK's calendar, making it also the highlight of the week for GBP/CAD. The data will be released as Sterling and the Loonie vye with each other for the top spot among major currencies for 2021, a battle that is won or lost on either side of 1.7380 for the Loonie. 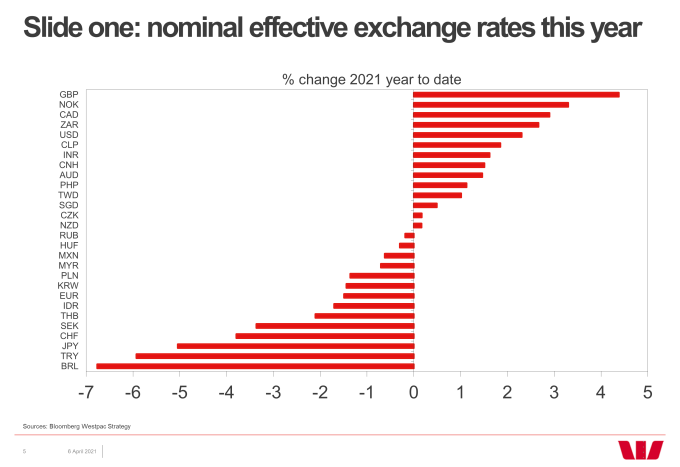 "The top of the performance table is dominated by oil exporters (CAD and NOK) and vaccine leaders (GBP and USD), while the bottom half features vaccine laggards (EUR), low yielding funding currencies (JPY and CHF) and economies beset with political risk and turbulence (TRY and BRL)," says Richard Franulovich, head of FX strategy at Westpac. "Our US growth and yield signals rose materially following last week’s 916k jump in March payrolls and impressive lifts in the ISM and Conference Board surveys."

The Pound-Canadian Dollar rate probed above 1.74 on Tuesday but already failed to sustain a move above there in the Monday session. A break above that level might prove difficult to sustain without either a Canadian jobs disappointment on Friday, or other factor that knocks investors' confidence in their outlook for BoC monetary policy.

Canada's Dollar otherwise continues to benefit from enhanced resilience to coronavirus-inspired restrictions on activity and its close proximity to a stimulus pumped U.S. economy that has recently had investors rethinking their earlier bearish outlooks for the U.S. Dollar.

Meanwhile, and after a strong start to the year, the Pound's recovery rally has lost momentum amid a deteriorating outlook for many economies in Europe, where governments have all been slow to make coronavirus vaccines available to populations and some major economies have recently returned to 'lockdown'.

There is little in the UK's calendar to command much attention from Sterling this week beyond the second and cofirmatory round of IHS Markit PMI surveys due on Wednesday and Friday's quarterly bulletin from the Bank of England,  leaving the Pound at the beck and call of international influences.

The Pound-to-Canadian Dollar rate has been trading in a tightening range spanning the gap between 1.73 and 1.74 over the recent month, although last week the exchange rate resisted moves below 1.7350, although once beneath there it benefits from a tried and tested Fibonacci support level around the 1.72 level. There is also a collection of moving-averages located between 1.7090 and Tuesday's market prices around 1.7380. 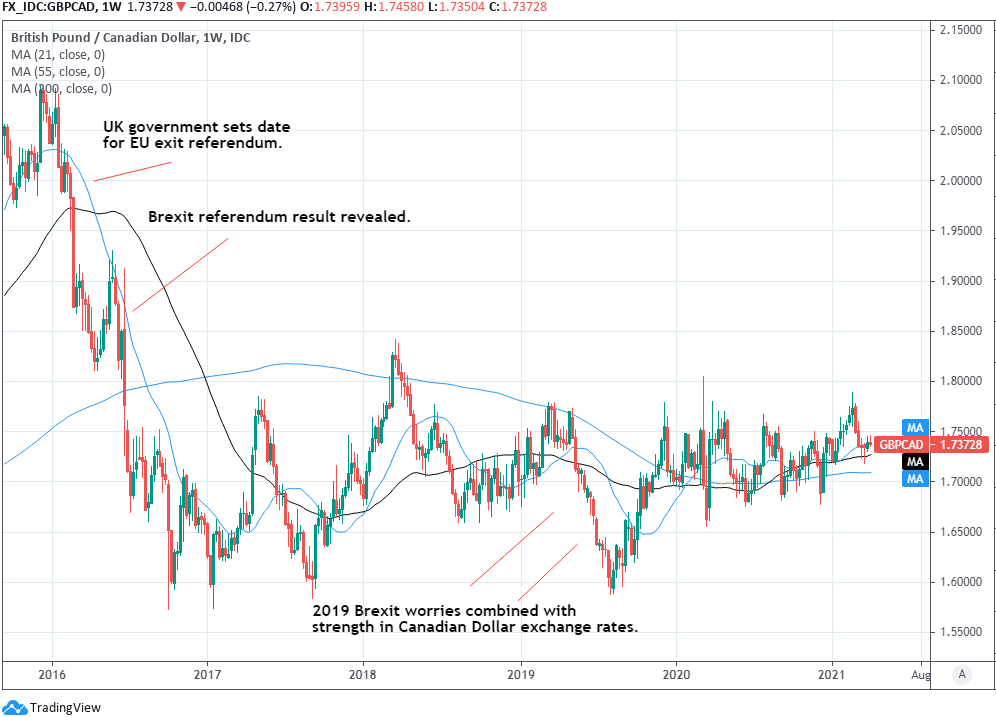 Above: GBP/CAD shown at weekly intervals with selected moving-averages.