The Canadian Dollar was an outperformer for the session as well as week on Thursday as it continued to overlook the elevated possibility of an interest rate cut or other policy action from the Bank of Canada (BoC) next Wednesday.

Alongside other earlier underperformers like the U.S. Dollar and Pound Sterling, Canada's Loonie has topped the board among major currencies over the course of the curent week although some strategists say its move higher really ought to have been stronger in light of recent gains for oil prices.

ICE futures for West Texas Intermediate crude oil rose five percent this week, taking total gains to 13% for the month to Thursday, while the underlying price increases in spot markets have since fed through to the Western Canadian Select which reached one-year highs above $40.

"One of the factors that is pushing USDCAD lower, and arguably merits even greater CAD strength than we've seen in the past few days, is the meteoric rise in WCS-grade crude prices," says Greg Anderson, global head of FX strategy at BMO Capital Markets. "However, every time USDCAD moves toward 1.2700, CAD-denominated short rates drop as market participants increase their bets on a micro cut by the BoC next week." 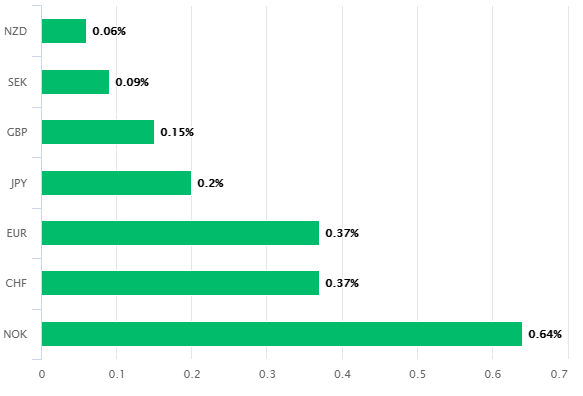 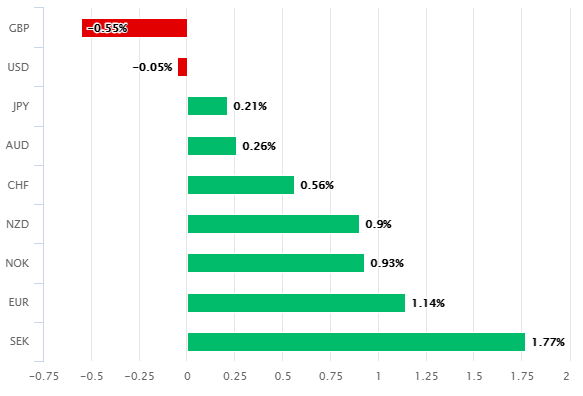 Above: Canadian Dollar performance on Thursday (left) and for the five days to Thursday (right).

The outlook for Canadian oil prices is improving in line with the prospects of other North American blends while global benchmarks like Brent crude have lagged behind more recently, potentially owing to better odds of a large fiscal stimulus in the U.S. as well as earlier outperformance by Brent crude.

But this isn't feeding through to a Canadian Dollar that could face a reckoning with the Bank of Canada as soon as next Wednesday, which is something the Loonie is not fully prepared for if prices in the overnight-indexed-swap (OIS) market are anything to go by. OIS rates implied on Thursday that Canada's 0.25% cash rate will sit somewhere around 0.18% at the end of the first quarter, implying just a 50% probability of a rate cut to 0.10% before then.

"We are skeptical that the BoC would expend that bullet in the current situation, but we think that USDCAD trading at 1.2500 would probably bring that response. That means that USDCAD has limited downside at the moment and isn't as attractive as a USD short as USDMXN," Anderson says. "We would still be looking to sell USDCAD in the high 1.27s. Post BoC, we might drop our sell zone 50 pips or so lower."

To the extent that the BoC could be likely to cut Canada's interest rate to a new record low when announcing January's policy decision at 15:00 London time next Wednesday, the Canadian Dollar is unprepared for such a move. However, and with the benchmark for borrowing costs already at the bank's 'effective lower bound,' there's uncertainty over whether it'll pull the trigger and in the process fire what is effectively its last conventional monetary policy bullet. 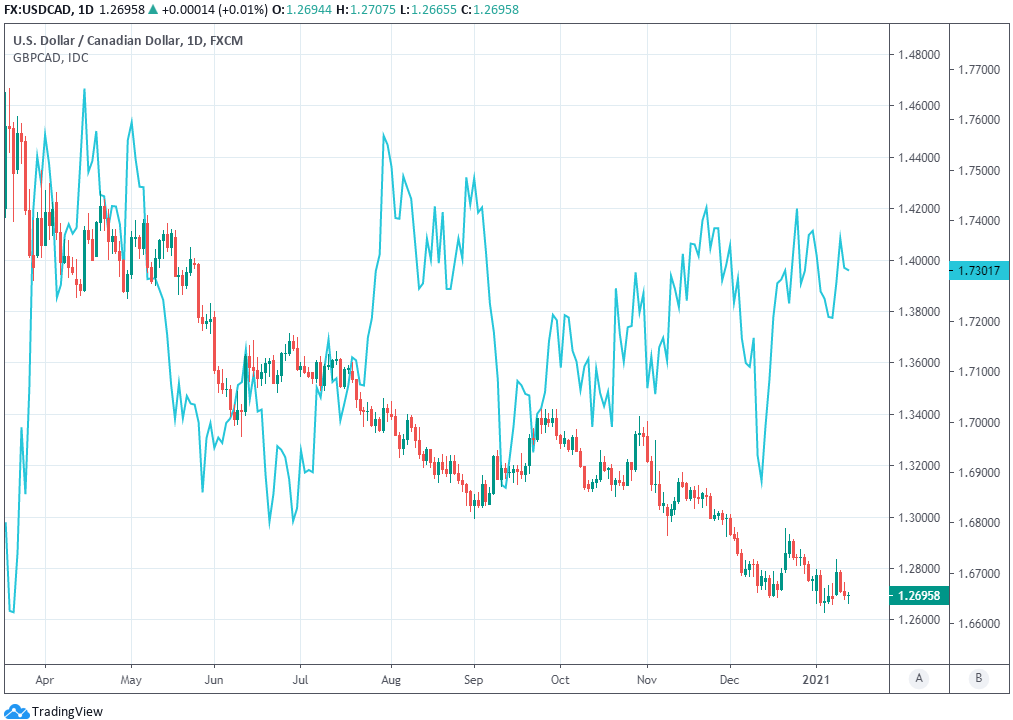 BMO Capital Markets doubts the bank would want to use this ammunition while markets are as calm as they have been lately, especially with the outlook for the global economy brightening as vaccines are rolled out. However, the BoC's view could depend on what it makes of the other policy options that might be available to it after any additional interest rate is announced. For now the bank's other actions have only gone as far as quantitative easing and forward guidance, although it does have alternatives.

"The market isn’t pricing in enough odds that the Bank of Canada could undertake a final 10-15 basis point trimming in overnight rates this month," says Avery Shenfeld, chief economist at CIBC Capital Markets. "Squeezing lending margins a bit further might actually work to reduce the flow of credit, but the Bank might think it would lean against Canadian dollar appreciation, and its future drag on exports. The evidence from Australia, where the RBA took a similar step, suggests that it might not be effective on currency sentiment. Threatening a cut, or a longer wait for the first hike if the CAD fails to correct, looks to be a better and more likely tactic."

Coronavirus-containing restrictions have disproportionately impacted services sectors and enhanced dependencies on manufacturing and exports for all economies, which are both areas of recent focus for the BoC.

Just like after 2008, Canada's economy has been quick to attempt a rebound out of its trough but back then its recovery was later characterised by an underperformance of the export sector. Close ties to the U.S. and a lack of competitiveness connected to low productivity growth and the Loonie's reticence to adjust fully to domestic challenges were key drivers of this, according to a December speech from BoC Governor Tiff Macklem.

Now the danger is that renewed shutdowns in Canada, owing to another wave of infections and coming against the backdrop of Canadian Dollar strength, prompt the BoC to either cut interest rates again or take other action next week with a view to further supporting companies and households as well as knocking the Loonie on the head.

"The BoC is likely to announce this year that it will adopt average inflation targeting in 2022. That would also help convince markets that the Bank of Canada could be more patient than the US in terms of the first hike, a contrast with what’s now priced into futures," Shenfeld says, referring to a policy recently adopted by the Federal Reserve. 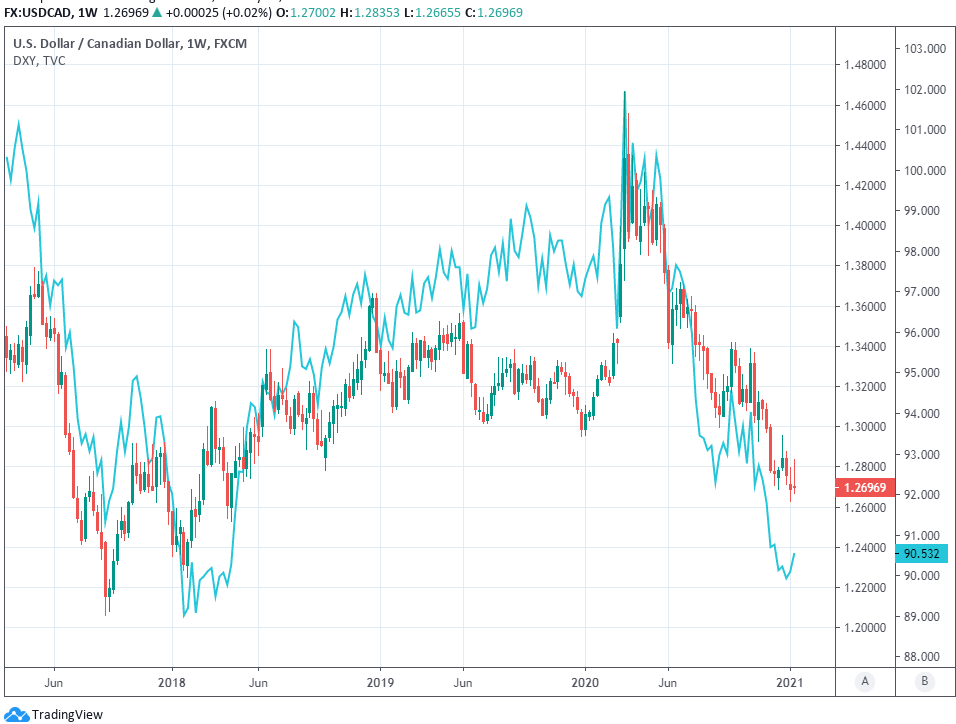