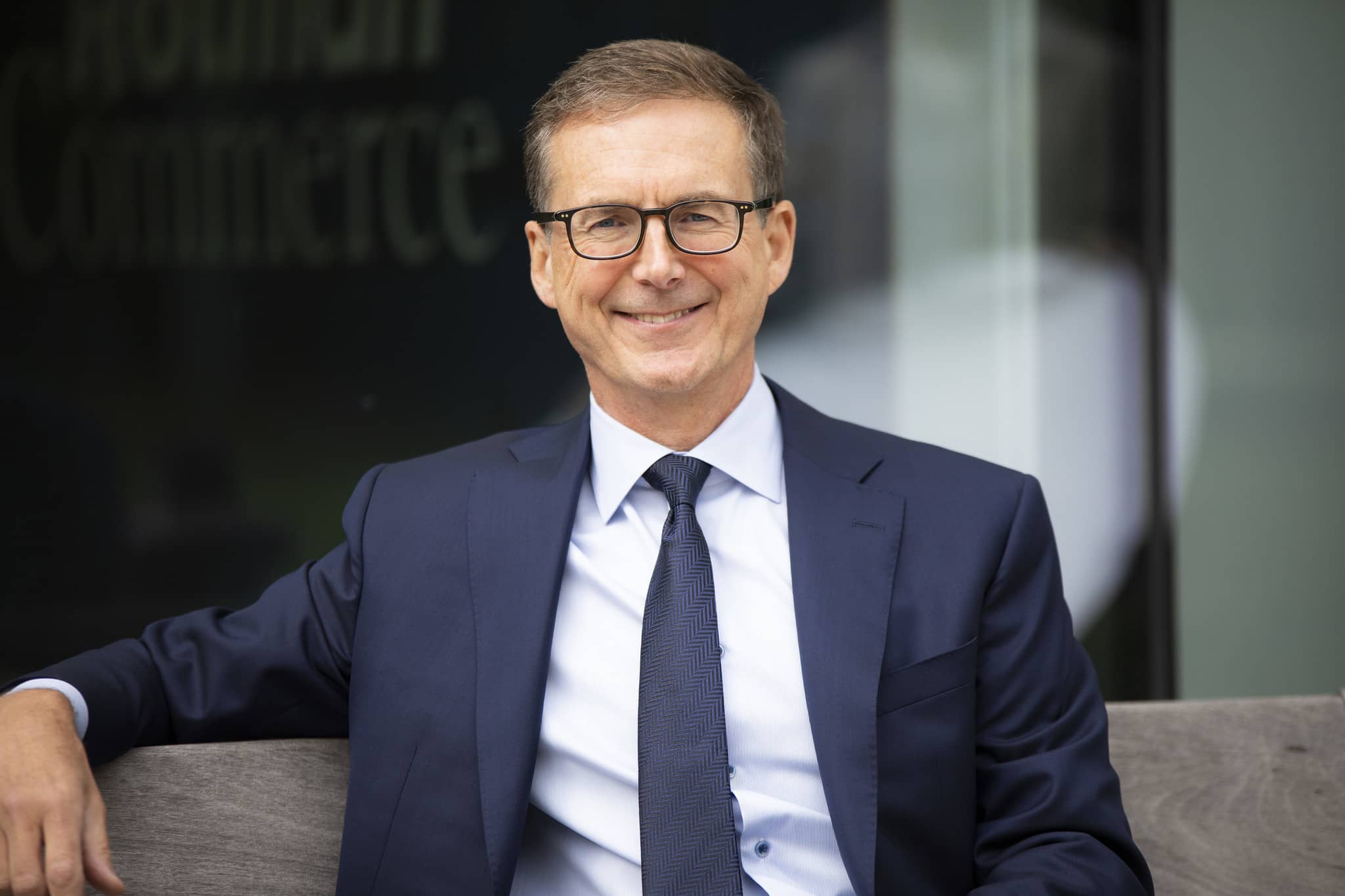 Above: BoC Governor Macklem is in focus on Wednesday. Image © Bank of Canada, Reproduced Under CC Licensing

That outperformance can continue should a number of factors fall into place over coming days and weeks, particularly if the U.S. election results in a market friendly outcome and progress towards the release of number of a covid-19 vaccine in early 2021 continues.

"The CAD is one of the out-performers this morning, which is unusual given that it has been one of the less volatile currencies in the G10 space. Given that it has risen in tandem with the NOK, a rise in oil prices may be a factor," says Bipan Rai, North America Head of FX Strategy at CIBC Capital Markets.

Canada and Norway are major oil producers and their currencies sustain fundamental value from the export of crude, therefore rising oil prices are often cited by foreign exchange analysts as being supportive.

The price of WTI oil rose by over a percent to trade at $39 a barrel at the time of publication while the price of Brent crude rose by a similar margin to trade at $41 a barrel.

A recovery in global stock markets is however likely to be the prime driver of Canadian Dollar gains, given research that suggests that in the current market environment a correlation with U.S. equity markets is of greater importance to the currency than the price of crude.

The correlation of the Canadian Dollar with the U.S. equity market "is the highest in the G10 and its USD beta is almost exactly 1," says John Velis, FX and Macro Strategist for the Americas at BNY Mellon. 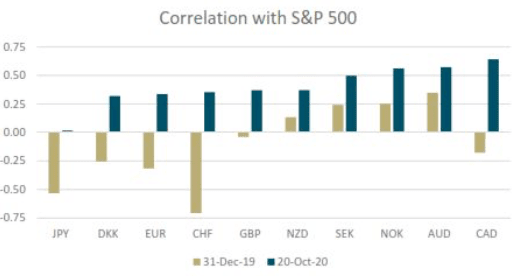 "Day-to-day movements in risk (using the S&P as a somewhat and admittedly crude measure of risk appetite) are the predominant driver of Developed Market FX at the moment," says Velis. "We interpret this unusual state of affairs as policy and political risk on steroids. The US election, where a Biden victory is still the predominant scenario according to the polls, is top of mind. If Biden does perform in line with the current polls, we’d view that as short term positive for the equity markets, a negative for the dollar, and a positive for the major crosses as a result."

(GBP/CAD forecasts for 2020-2021 are now available in download format from Pound Sterling Live's partners at Global Reach. See where the likes of Citi, Barclays, JP Morgan and Morgan Stanley are forecasting this pair). 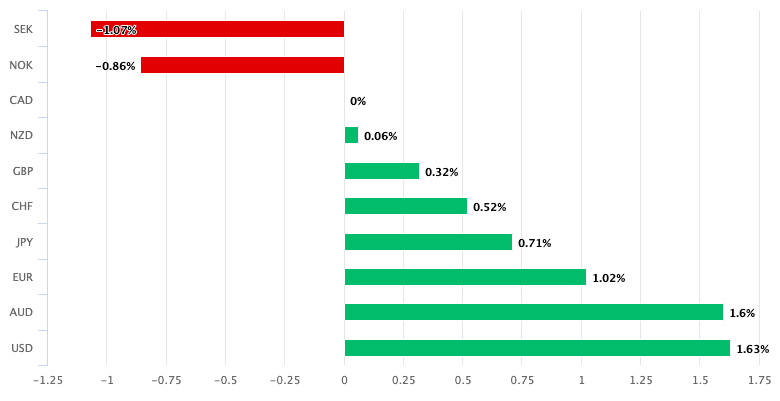 Above: CAD has outperformed the majority of its peers over the past month. Lock in current CAD exchange rates for use up to 24 months in the future. Learn more about the tools available to protect and maximise your international payments.

The Canadian Dollar rose against the majority of its peers on Tuesday, save for the outperforming Norwegian Krone, amidst a lingering expectation for a market-positive outcome to the U.S. election.

Joe Biden's lead in three key swing states appears to be stable according to polls out this week, Biden holds a comfortable lead in the three states that took President Trump to the White House in 2016 and there is as yet no evidence of a late polling shift in the president’s direction, as was the case in 2016 when favourite Hillary Clinton unexpectedly lost.

According to political commentators, if Biden holds on to the states Clinton won in 2016, and flips Michigan, Pennsylvania, and Wisconsin, he will win the election.

While the broader narrative of a strong showing for Biden and the Democrats is positive for markets (simply because the market wants a decisive outcome), and the Canadian Dollar by extension, trendless markets betray an uncertainty amongst traders towards an uncertain result to next week's vote. 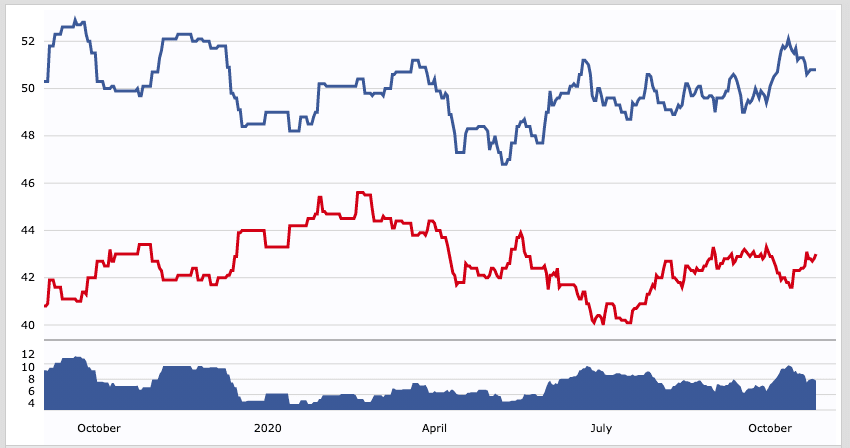 "G10 currencies are largely watching this week's gyrations in sentiment from the sidelines as the FX market's sensitivity to global risk appetite has fallen sharply ahead of the US election. While we are largely looking for the main USD pairs to remain rangebound, we think there is still some scope for investors to square positions further ahead of the event," says Mark McCormick, strategist at TD Securities.

A contested election result is widely held by foreign exchange analysts to be positive for the U.S. Dollar - which would be expected to shine as a 'safe haven' asset - and negative for currencies such as the Canadian Dollar. While pollsters have fine-tuned their state-level polling to account for getting it so wrong in 2016, a new uncertainty has emerged in 2020 in the form of huge demand for postal ballots.

Political analysts say early voting by a significant portion of the population could impact the ability of the polls to correctly call the outcome. Meanwhile, any delay in releasing the results of postal ballots poses questions as to whether a final, close result will be contested.

"The US election is becoming an increasingly competitive race. The contest for the Senate in particular is almost too close to call, dimming the prospect of a sweeping Democratic victory that could deliver gigantic stimulus packages. A split Congress would imply a continuation of political gridlock, with the greatest fear being that ‘fiscal discipline’ could return as a theme next year," says Marios Hadjikyriacos, Investment Analyst at XM.com.

While the outcome of the vote will be the market's primary concern in the near-term, domestic developments in Canada on Wednesday are also expected to have a bearing on CAD trade.

The Bank of Canada is to give its latest policy update, where analysts are expecting interest rates and quantitative easing levels unchanged.

While such a move would be on balance neutral for the Canadian Dollar, what could prompt moves in the currency is the guidance offered by Governor Tiff Macklem and his team.

"The BoC could hit a cautious tone given the significant increase in COVID-19 cases while reiterating that the second phase of recovery will be long and protracted," says a weekly currency market note from Barclays. "The bar for action in this week’s meeting is higher due to extended fiscal support and the BoC would likely want to assess the outcome of US Elections, further easing indications by Fed and the economic impact of the second surge in local cases before deploying further assistance."

While there are various tools left in the BoC’s arsenal in case of a headwind, Barclays say they believe that quantitative easing will remain the tool of choice.

"The Business Outlook Survey last week was in line with what the BoC has been saying about the second phase of recovery being difficult and slow. However, the survey was done before the recent pickup in COVID, so the BoC could sound a little more cautious than what the survey suggests," add Barclays.

A cautious approach and hints of further policy support from the BoC could well prompt some weakness in the Canadian Dollar, but given the importance of global factors any impact to the currency might be short-lived.

"Sentiment remained cautious for the loonie on the eve of a Bank of Canada policy decision," says Joe Manimbo, Senior Market Analyst at Western Union. "While the local economy has shown impressive signs of rebounding from the pandemic recession, the outlook remains fraught with downside risks as Covid cases accelerate at home and abroad. Central bank messaging that warns of a potentially dark and cold economic winter would leave the loonie vulnerable to the downside."