"End of the road for CAD appreciation due to weak trade fundamentals and stalled global recovery," says the bank's economics research department in a recent briefing.

The Canadian Dollar has rallied alongside other major currencies against a weakening U.S. Dollar over the course of the past month, a period that has coincided with a broad-based decline right across the USD complex and therefore suggests little of the move actually owes itself to CAD strength.

Indeed, Canadian Dollar strength was lacking elsewhere and the currency has in fact underperformed all the other major constituents of the G10 basket: 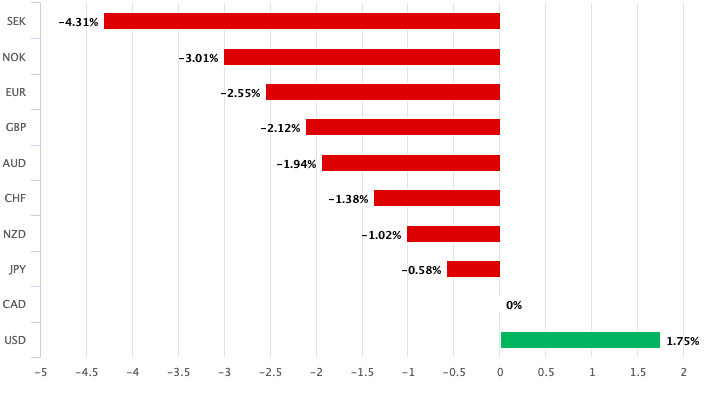 Concerning the outlook, this underperformance could extend with analysts at CIBC warning that the currency could now even come under pressure against the U.S. Dollar over coming days and weeks.

"The rally is now running on empty," says Katherine Judge, Economist at CIBC in a monthly currency briefing. "The strength in CAD appears set to reverse in short order as relatively weak fundamentals are revealed, and the global economic recovery stalls, giving a safe haven bid to the USD."

The Canadian Dollar forms one of the so-called commodity currencies, in that it tends to derive value from the significant foreign exchange earnings Canada derives from the exports of commodities.

Analysis from CIBC suggests that the Canadian Dollar's rally against the U.S. Dollar - which would have put something of a floor underneath under-pressure CAD exchange rates elsewhere - has largely been driven by the recovery in oil prices. 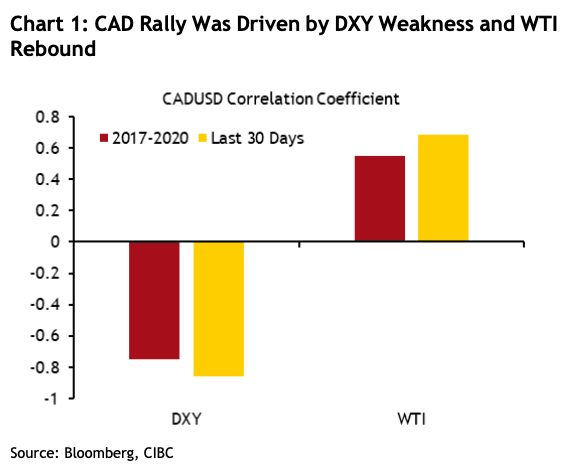 But, the gains in oil prices and other commodities is unlikely to extend from here according to analysts.

"Upwards momentum in commodity prices seems poised to fade as the recovery in the US slows, and second waves of the virus in other major regions challenge demand for Canada’s resource sector. Canadian exporters outside of the energy sector were already struggling with an uncompetitive exchange rate heading into this crisis, something that worked to amplify the current account and trade deficits, and clearly requires a weaker loonie," says Judge.

Moreover, CIBC observe Canadian households entered into this crisis in a weak position with elevated levels of debt, leaving population growth as the main driver behind consumption.

"Canada’s recovery is expected to be protracted relative to the US as a result, another ingredient for C$ weakness through the next year," says Judge.

The Pound-to-Canadian Dollar exchange rate is forecast at 1.69 by the end of September, and at 1.74 by year-end but gains should extend into the middle of 2021 if CIBC are correct, with a target for 1.77 being seen at this time.

The U.S. Dollar-Canadian Dollar exchange rate is forecast at 1.37 by the end of September and 1.38 by year-end, a level it is seen as pivoting around until mid-2021.

The Euro-to-Canadian Dollar exchange rate is forecast at 1.57 by end-September and 1.60 by year-end.