Pound Sterling advanced tepidly in what was a quiet week for the Loonie with many Canadians out from Wednesday onward for the Canada Day public holiday but could struggle early in the new week if investors take fright at a Sunday Times report suggesting the Bank of England (BoE) has written to commercial lenders warning of the costs associated with a possible shift to a negative interest rate policy further down the line.

The BoE has broached the subject repeatedly of late, prompting weakness in Sterling in most instances so the British unit will be vulnerable early in the new week while the Loonie might have catch-up potential after underperforming many of its major rivals last week. If GBP/USD retreats back toward the 1.24 handle early this week while USD/CAD goes on falling toward 1.35 the Pound-to-Canadian Dollar rate would fall to 1.6756.

"Downside risks for the GBP appear to be growing a bit more significantly again. Short term support is 1.6755. Key support (the March low) is 1.6555. The GBP needs to regains 1.7025/50 in order to stabilize or improve modestly from here," says Juan Manuel Herrera, a strategist at Scotiabank in a note last week.

The Bank of Canada (BoC) will release its quarterly business survey at 15:30 on Monday just days after official data showed Canada's economy shrinking by less than was expected during April, although like many other currencies the general mood in the market might matter more for the trajectory of the Loonie. The Pound-to-Canadian Dollar rate has traded with a negative correlation to global stock markets of late, which means any resilience in broader risk appetite could add to the early headache for Sterling. 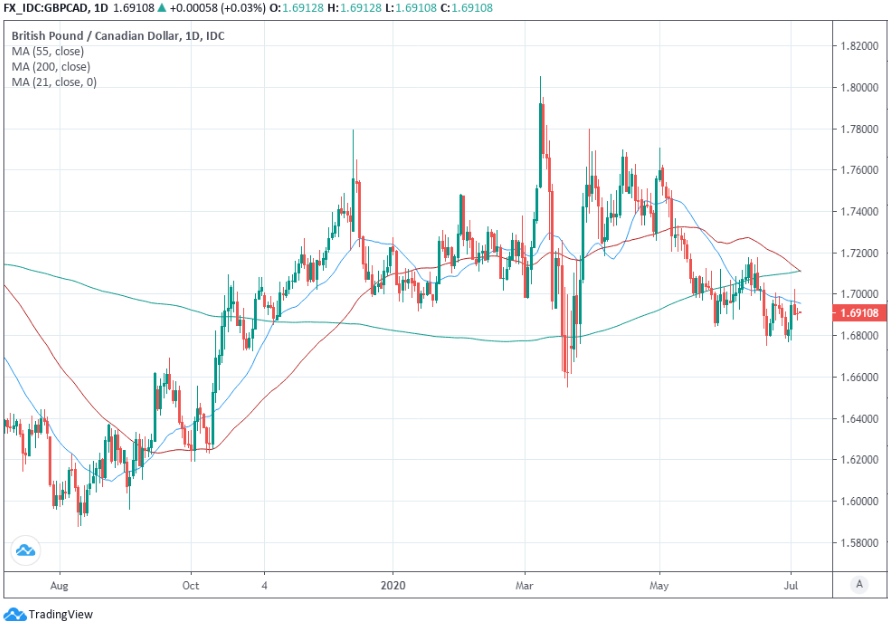 The Pound had stabilised against the Canadian Dollar despite that Prime Minister Boris Johnson indicated three times that he's open to an Australian style trade relationship with the EU, otherwise known as one governed by World Trade Organization terms though it was wobbled on Thursday by an early end of the first "accelerated" round of Brexit trade talks. The Brexit talks are at a crucial juncture and will be a key focus this week but before then Sterling will take cues from Wednesday's mini budget.

Chancellor Rishi Sunak is expected to announce fiscal measures aimed at jump starting the economy Wednesday after pubs and restaurants were allowed to open on Saturday for the first time since March, largely completing the domestic exit from 'lockdown'. It's not clear how the Chancellor will aid the economy but any significant new spending might get the attention of the market and be enough to put a floor under the Pound from mid-week.

Sterling also benefits from a positive technical backdrop on the GBP/USD charts, which has led some analysts to look for a rally up to 1.2660 for Sterling against the U.S. Dollar over the coming days. A GBP/USD rate of 1.2660 would lift the Pound-to-Canadian Dollar rate to 1.7108 if accompanied by a USD/CAD rate that was trading near to 1.35, though USD/CAD losses beyond there would limit the upward move in GBP/CAD.

"Next week may give the CAD a chance to pick up a little more fundamental support, with some key data on tap. Broader market sentiment fails to reflect our perspectives on the CAD, which may be the biggest hindrance to gains right now," says Shaun Osborne, chief FX strategist at Scotiabank. "In the longer run; positioning is relatively extreme and vulnerable to a squeeze. Our week-ahead model indicates more range trading for USDCAD around current levels (1.3575), with a potential range of 1.3385/1.3760." 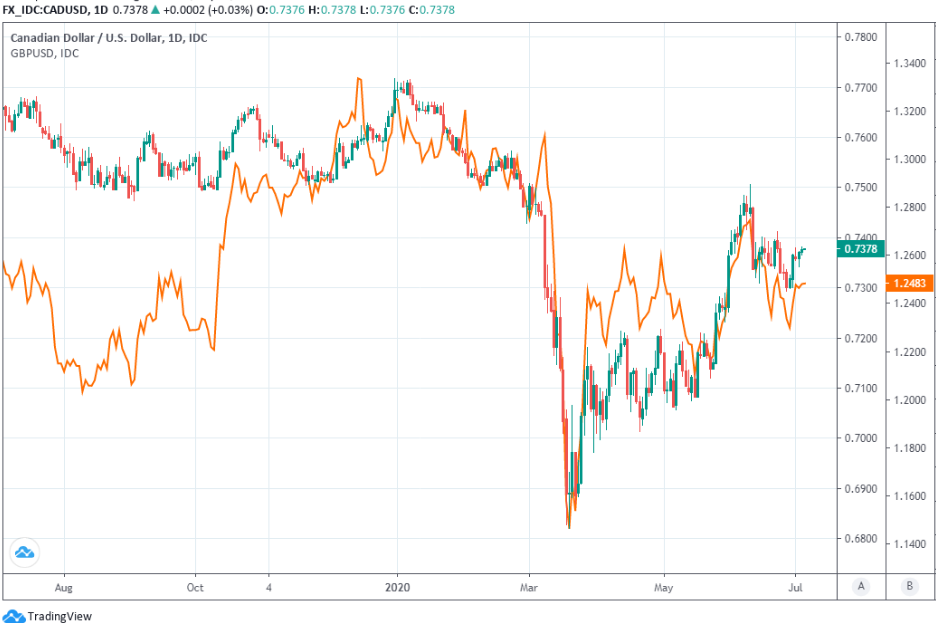 Any upside in Sterling will be at risk in the final session of the week when updates are expected from Brexit negotiators and Canada's June jobs data is due at 13:30.

Canada's labour market is seen adding 550k jobs back to the labour market in June, likely pushing the unemployment rate down to 12.5% though better-than-expected GDP data suggests the risks might be to the upside.

British negotiator David Frost said last week only that "We have completed our discussion...The negotiations have been comprehensive and useful. But they have also underlined the significant differences that still remain between us on a number of important issues. We remain committed to working hard to find an early understanding on the principles underlying an agreement," while familiar complaints were heard from the European side.

Any hint of progress in the Brexit talks either this week or later in July could light a fire under Sterling given the large losses its suffered in the last two months and the general pessimism toward it, which has seen the Pound-to-Canadian Dollar rat fall close to -5%. But if the talks come and go without progress then the Pound could struggle to sustain any gains over the Loonie, more so if the negative correlation between GBP/CAD and stock markets persists.

"GBPUSD has been on the defensive ever since yesterday’s announcement about a key EU/UK negotiation getting cancelled for today. Next week’s UK economic calendar will be relatively uneventful (just the June Construction PMI out on Monday), which should leave traders focused on the broader market risk tone and Brexit-related headlines as usual.  The chart technicals for GBPUSD have very much turned more neutral," says Eric Bregar, head of FX strategy at Exchange Bank of Canada. "Month/quarter-end dollar selling very much helped to keep dollar/CAD's daily downtrend intact (below the 1.3700-1.3710s), but we don’t foresee serious downward momentum returning until the 1.3490-1.3510 support level gets taken out." 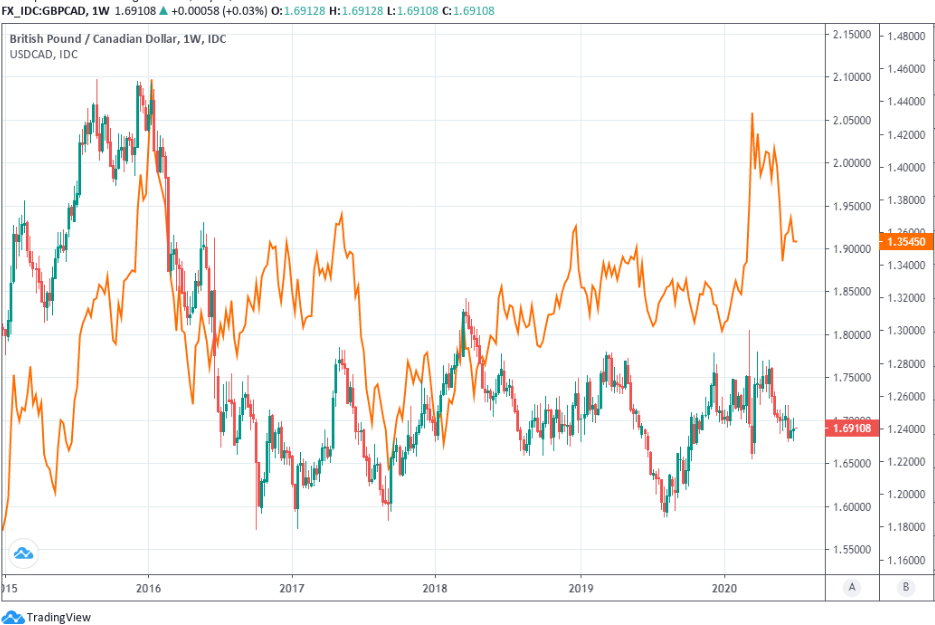 Above: Pound-to-Canadian Dollar rate at weekly intervals with USD/CAD (orange).