- GBP/CAD advances as GBP outperforms, CAD underperforms.
- But may face heavy losses if bearish market lightens up on CAD.
- CAD remains largest bearish bet with investors in major currencies.
- But economy suffered less than others at hands of coronavirus.

The Pound-to-Canadian Dollar rate was on course for a third consecutive gain on Thursday as Sterling continued its correction higher against a range of major counterparts, but the exchange rate could face fresh losses if a bearish market lightens up in its view on the prospects of the Loonie.

Pound Sterling was edging higher but scored one of its best gains over the Loonie, which has underperformed this week amid the Canada Day public holiday that's expected to keep local participation low through to the weekend.

But this week's underperformance by the Loonie simply continues a trend that dates back to early June and which has been evidenced by losses to all major currencies within that period with the exception of Sterling.

The Pound-to-Canadian Dollar rate has fallen in the last month and was down for the 2020 year on Wednesday too, despite that underperformance by the Loonie, which is testimony of the sheer scale of losses in the major British exchange rates which have all slipped lower this year.

However, Sterling's slide can extend further if it continues to underperform, or if the market lightens up in its currently bearish outlook for the Canadian unit. 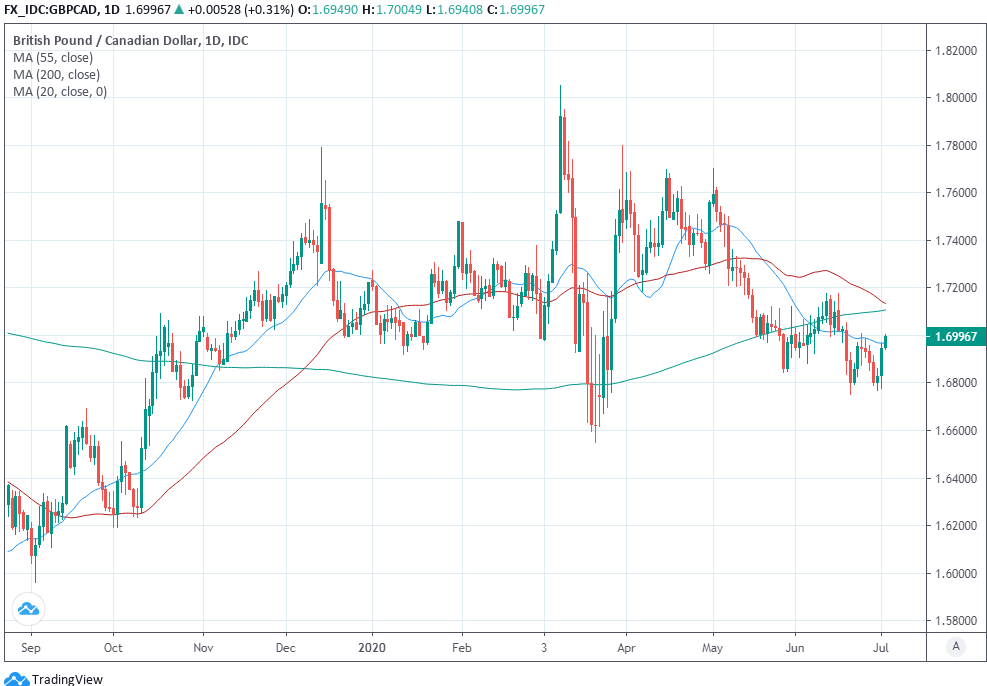 Above: Pound-to-Canadian Dollar rate shown at daily intervals with 200-day moving-average in green.

With the UK lagging other countries in contracting and containing the coronavirus and then reopening the economy, a game-changing improvement in sentiment toward Sterling might only be possible through seemingly unlikely progress in the Brexit trade talks.

Progress might be unlikely given the incompatible objectives on either side of the process, not to mention the recent rhetoric of Prime Minister Boris Johnson and negotiator David Frost, who was promoted to the role of National Security Adviser at the weekend, which he will hold alongside that of Europe Adviser.

PM Johnson said at the weekend the UK could exit the transition period at year-end without preferential trade terms just as the latest and "accelerated' round of talks was about to get underway. Chancellor Angela Merkel said Wednesday the bloc must be prepared for exactly that outcome as she and Germany assumed the rotating European Council presidency, which runs to year-end.

"Do not expect Germany to shift the EU‘s negotiating position. To strike a deal worth its name, the smaller UK will have to soften its own stance significantly further," says Holger Schmieding, chief economist at Berenberg.

Meanwhile, the Loonie was still the currency market's biggest 'short' in late June, according to the Chicago Futures Trading Commission data, which analysts attribute to either its oil market exposure or high developed-world-beating levels of household debt that might hamper an economic recovery.

There's no telling for sure exactly why investors have bet the way they have, although it might have something to do with the large share of Canadian exports that are taken up by oil, which could require a rest-of-world recovery before prices can claw back all of their coronavirus-related losses.

Canadian Dollar underperformance could also have to do with the restrictive impact that investors might see high household debt levels having on consumer spending and as a result, the economic recovery in that part of North America. Worries about household debts, inflation and interest rates could conceivably hold back Canada's recovery from a comparatively worse slump in consumption.

Retail sales figures for the UK and Canada show spending in the latter falling by a sharp -26.4% in the first full month of 'lockdown' during April, whereas they declined by only -18.1% in the UK.

However, GDP figures told a different story this week, with Canada's economy shrinking -11.6% in April. That was a record decline for output but one that was smaller than the market had envisaged and which pales in comparison with the -20.3% fall in the UK. Meanwhile, the Canadian economy contracted -2.1% in the opening quarter against a -2.2% decline in Britain.

But should investors grow less pessimistic on the outlook, then exiting or trimming down those bearish 'short' positions would require them to buy back the Loonie by selling USD/CAD. 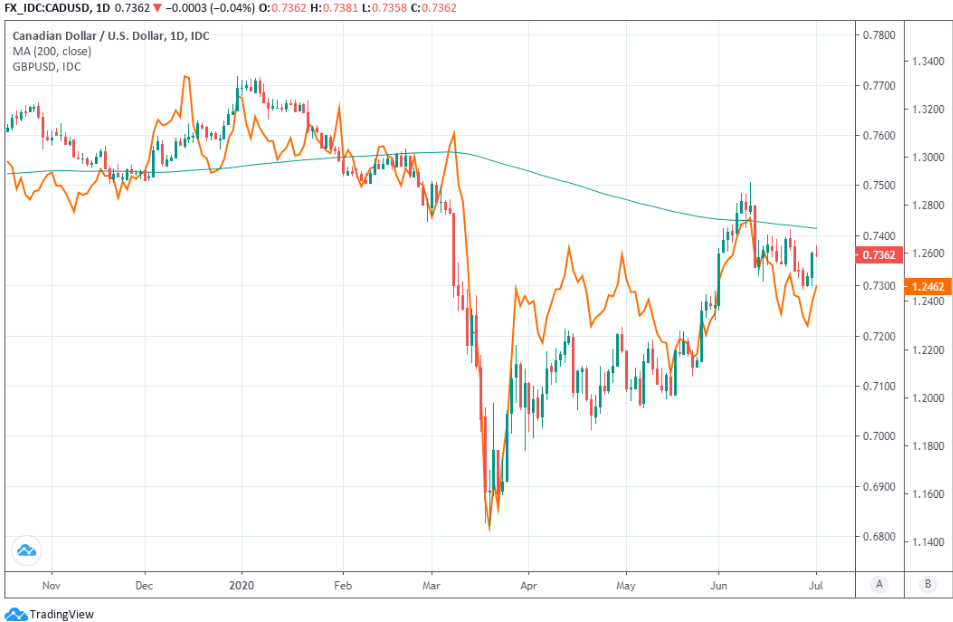 Above: CAD/USD outperforms GBP/USD (orange line) even with weight of speculative investment community against it.

Exiting such bets would have consequences for the Pound-to-Canadian Dollar rate because it's an amalgamation of GBP/USD and USD/CAD.

"Today GBP has continued yesterday’s moves higher. But with Long GBP positions it's constantly betting on “hope and the outside chance”, but continuously dealing with disappointment...The main risk to GBP shorts is Sunak’s speech on Wednesday next week and if it makes up for the lack of extra fiscal stimulus or capital spending from Boris Johnson yesterday," says Jordan Rochester, a strategist at Nomura. "We remain short USD/CAD in cash."

USD/CAD losses could drag the Pound-to-Canadian Dollar rate lower even in a market where Sterling is rising against other currencies, just so long as the Loonie's gains over the greenback are larger than Sterling's.

It remains to be seen whether that will happen, although Nomura is advocating continued bets against USD/CAD, which is the same as betting in favour of the Canadian Dollar. Meanwhile, the Brexit talks are going nowhere fast, which is hardly supportive of anything more than the most short-term and fickle outperformance by Sterling.

"The Canadian dollar remains the biggest short in G10 (-20% of open interest) according to CFTC data. What's surprising is the divergence with the antipodeans," says ING's Krpata. "At the same time, the Canadian dollar has seen some improvement in its fundamentals. In addition to the recovery and stabilisation of oil prices, the economic outlook looks better following employment data which signals a V-shaped recovery. In turn, we would not be surprised to see CAD positioning recover in the coming weeks, a delayed response to the spot dynamics which was also seen in AUD and NZD." 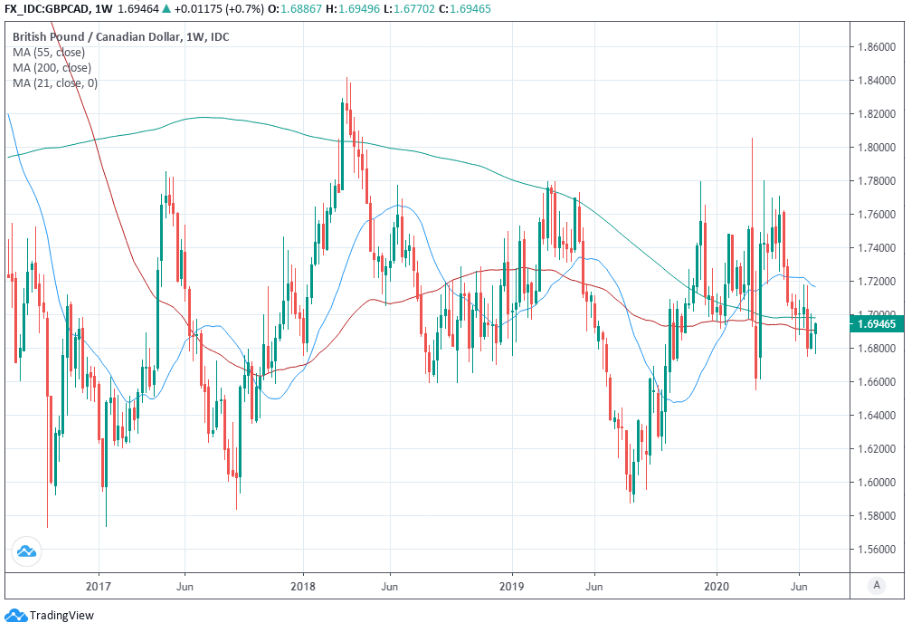