The Pound-Canadian Dollar rate tested the top of its 2020 range last week but the two currencies are among the most vulnerable to any continued wobbles in the stock markets while each face a full plate of domestic risks over the coming days that could keep the exchange rate locked in a wide four cent range.

Pound Sterling had rallied into month-end on Thursday but the final session of the week saw the British currency hand back most of its earlier gains as the raucous recovery in global stock markets appeared to end with the month of April, leading to a sell-off in some risk-sensitive currencies on Friday.

The same was true of the Canadian Dollar, which also fell almost a full percent against the greenback and in the process, limited the Pound-Canadian Dollar rate move to just +0.15%.

The British currency did however, eke out a 0.9% gain over the greenback for while the Canadian Dollar ceded just more than half a percent to its North American rival, which left the Pound-Canadian Dollar rate with a 0.76% gain for the week. The GBP/CAD rate always closely matches the sum of GBP/USD over CAD/USD. Sterling will open the new week around 1.7605 and will be well supported by the 55-day moving-average of prices located around 1.7305.

Last week's decline in the Pound-Canadian Dollar rate was arrested on Thursday by the 55-day average although further down, and near to the 2020 range floor, is the larger and more significant 200-day moving-average at 1.6933. However, and immediately overhead is the 38.2% Fibonacci retracement of the 2016 downtrend and Sterling has not sustained a move across that rubicon since the early days of 2018 so might be liable to retreat lower early in the new week absent some fresh positive momentum. 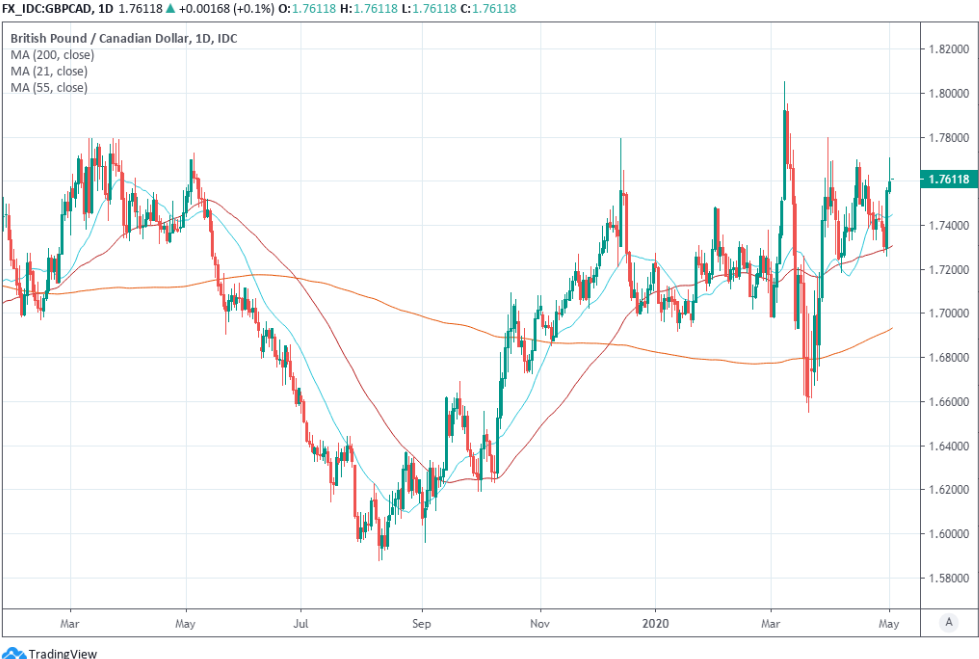 "After a strong April for stocks, May has started off weakly and risk aversion is acting as a short-term dampener on the CAD," says Shaun Osborne, chief FX strategist at Scotiabank. "Our week-ahead model anticipates some modest weakness in USDCAD from current levels and a range of 1.3900-1.4250. But risk appetite remains the big influence on CAD sentiment, which risk reversals suggest has weakened a little, so the inauspicious start to May is a little concerning and a clear headwind for the CAD near-term. Rather than dipping, USDCAD seems more likely to nudge higher towards the topside."

The most important determinant of direction is in today's market at least, the willingness of investors to hold risk assets like stocks, Sterling and the Loonie. This intertwines the fate of both with general sentiment in the market, which took a knock Thursday and Friday after President Donald Trump threatened new tariffs for Chinese exports due to the way in which the country is believed to have initially handled the coronavirus outbreak there.

The prospect of a fresh U.S.-China trade skirmish coming at a point when the global economy is already in need of intensive care prompted many major stock indices to fall more than 2% on Friday and lifted safe-haven currencies. But Sterling and the Loonie have almost a matching correlation with the S&P500, hence the limited move Friday, which could be said to put the onus on each currency to produce something that gives the exchange rate a new directional tilt. The Pound-Canadian Dollar has been as low as 1.65 this year and as high as 1.80 although it's spent most of the time roughly between 1.72 and 1.76.

"Price action on USD/CAD and USD/RUB is almost a mirror imagine with the peak in mid-March and an almost 50% retracement complete. Prices are trying to validate support in the 1.38s and 72s to imply double bottom patterns form. Given we look to buy USD on dips, small longs at these support areas make technical sense. However new lows (USD/CAD below 1.3850 and USD/RUB below 72.60) weakens the bottom pattern structure. A drop to the 61.8% retracements of 1.3611 and just below 70 could follow," says Paul Ciana, chieft technical strategist at BofA Global Research. 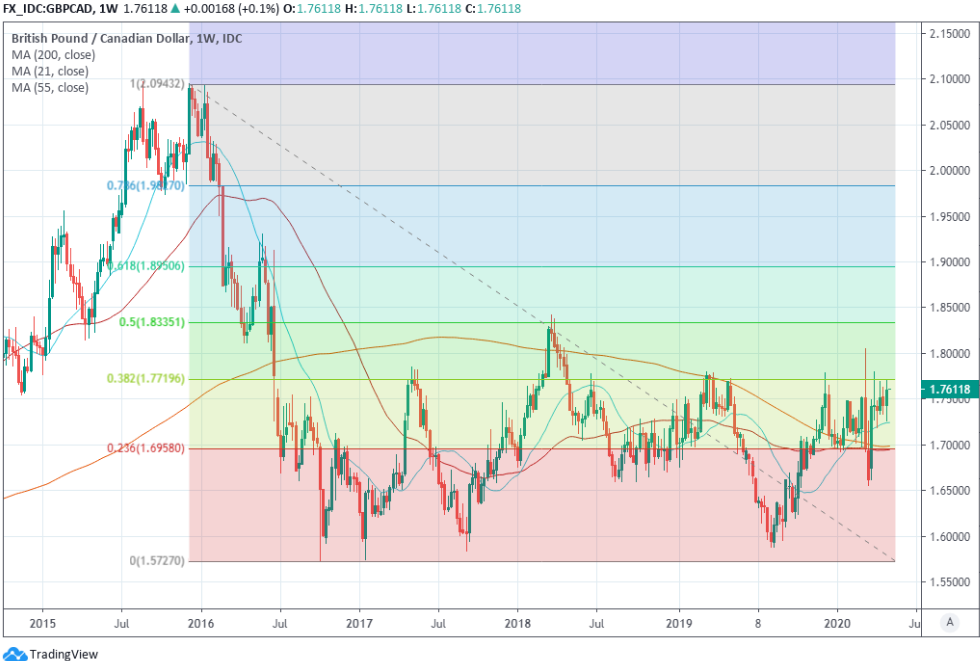 Both currencies are positively correlated with the S&P500 although the chart at the bottom shows the Loonie following the index and Sterling lower during the market rout of March but then lagging the two during the subsequent recovery. Canada's Dollar has been unable to reap the benefits of April's rebound in risk assets because of the huge declines in the price of oil, the country's largest export, which risk enhancing the blow dealt to the economy by the coronavirus.

"The Canadian dollar could, however, tumble for other reasons, e.g. if there’s an asymmetric macro shock that hits Canada and leaves the U.S. largely unscathed. The recent oil price collapse could fit the bill if it proves permanent," says Stefane Marion, chief economist at National Bank of Canada.

The oil connection might be enough to ensure Sterling keeps getting the better of the Loonie when the market moods sours although that's far from assured, especially as the UK faces another Brexit deadline in June that could soon begin to weigh on the British currency. The prospect of something like a 'no deal' Brexit at the end of 2020 could do for Sterling what collapsing oil prices have done for the Loonie and its corelation with the S&P 500.

As a result, and although Sterling retains an upside bias currently, the rug could easily be pulled out from under the Pound-Canadian Dollar rate in the weeks ahead. In the meantime, the ebb and flow of risk appetite will dictate direction for both currencies while domestic developments can help to controlmomentum.

Thursday's Bank of England (BoE) meeting might garner some of the market's attention. So too will Friday's March employment data from Canada where consensus looks for a record 5 million Canadians to have lost jobs in March as the coronavirus shutdown took effect, which is expected to have pushed the unemployment rate up to 20%.

However, the overwhelming focus among investors remains on the lifting of 'lockdown' measures because this dictates how soon economies can begin returning to normal levels of activity, which has a direct bearing on risk appetite. 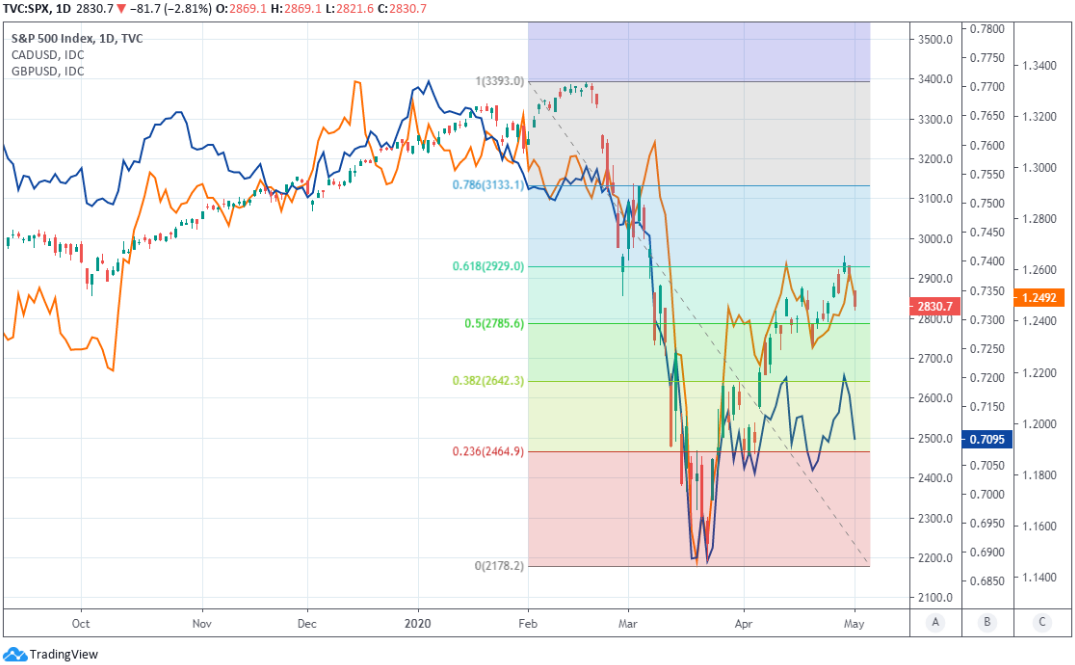 Above: S&P500 index with Fibonacci retracements of 2020 downtrend, alongside GBP/USD (orange) and CAD/USD (blue).