One exchange rate that is becoming incredibly interesting - at least for those who are stimulated by FX markets - is GBP/CAD, which appears to be defying all the volatility and noise that has descended on the wide financial market place.

Today we see the pair trading at 1.7455, which is more or less where the middle of a range that has been in place since early March, when the coronacrisis meltdown first struck.

The GBP/CAD exchange rate's resolute move sideways could be suggestive of a stable market, and one that is unlikely to offer any fireworks for the foreseeable future and therefore one that is hard to get excited about. 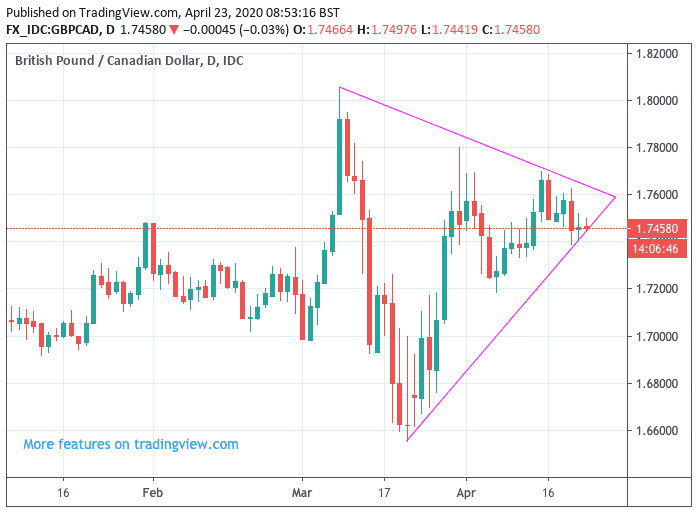 While sideways action is hardly exciting, taking another viewpoint reveals a market that appears to be consolidating in much the same fashion as a coiling spring, and whose energy must at some point be released.

Therefore, a breakout is becoming increasingly likely and this should provide some notable volatility that could in turn trigger a more decisive trend in the Pound-to-Canadian Dollar exchange rate.

However, the direction the breakout adopts or where any resultant trends go remains up for question.

We would have hoped to receive some guidance on the Canadian Dollar's outlook in the wake of the recent volatility in oil markets, as the FX textbook says the CAD should trade as a function of oil market dynamics owing to Canada's large oil production sector.

However, the sharp slump in North American benchmarks on Monday and Tuesday has failed to have a material impact on the Canadian currency. This would suggest to us that the currency market has absorbed as much oil price dynamics into CAD valuations is possible, therefore negative news in oil markets simply fails to register.

That said, we would also add a caveat that it is negative news on oil has lost potentially lost its impact and that any improvement in the oil price outlook could in fact see the Canadian Dollar rally.

After all, rising oil prices will improve Canada's terms of trade and boost its foreign exchange earnings.

Gittler says he is however not inclined to believe that oil is ready for a sustained improvement in fortunes.

"I don’t think that the rally will last. It was apparently caused by three things: first, the US Dept of Energy figures on oil inventories showed that inventories rose less in the latest week than they did in the week before. Marvelous! Far be it from me to point out that if it hadn’t been for the rise in the week before, the latest week would’ve been the largest rise on record in data going back to 1982. And the four-week moving average is still moving up," says Gittler.

While the U.S. Department of Energy data shows the fall in global demand for oil is bottoming out, this might simply steady the ship, rather than trigger a rally. It will take a fundamental recovery in economic activity for oil dynamics to shift materially once more.

And until lockdowns are unequivocally lifted, it is hard to see this happening.