The Pound-to-Canadian Dollar exchange rate rally was halted over the course of the past 24 hours amidst a substantial surge in the price of crude oil after news that OPEC+ - the cartel of some of the world's largest oil producers which includes Russia - could be about to scale back production.

President Donald Trump said via his Twitter account Thursday that after speaking with leaders of both Russia and Saudi Arabia, an OPEC production cut of at least 10mn barrels per day could be reached soon.

The news prompted a substantial rally in the price of crude oil which has been trading at multi-year lows owing to a slump in global demand and a glut of supply from OPEC+. This matters for the Canadian Dollar as crude oil makes up a significant portion of the Canada's foreign currency earnings; higher oil prices result in greater inward flows of foreign capital which in turn bids the currency higher.

"Global oil prices rose by up to 25% on Thursday after US President Donald Trump said he expects Russia and Saudi Arabia to announce a major production cut, down as much as 10‑15 million barrels per day. Further, Saudi state media said that the kingdom was calling for an emergency meeting of OPEC nations and other major oil producers. After rising as much as 47% during the session, Brent crude ended higher by US$5.20 or 21% to US$29.94 a barrel. The US Nymex price rose by US$5.01 or 24.7% to US$25.32 a barrel. Both crude quotes posted record daily percentage gains," says Gareth Aird, a Strategist at Commonwealth Bank of Australia.

However at the time of updating on Friday, oil prices have scaled back from their peaks and the Canadian Dollar has given back some ground.

Indeed, the rally in the Canadian currency has hardly convinced us that a major turnaround is at hand, we believe markets are waiting for more concrete signals to come out of the likes of Russia, Saudi Arabia and the U.S. before creating a more sustainable bid under oil.

Just spoke to my friend MBS (Crown Prince) of Saudi Arabia, who spoke with President Putin of Russia, & I expect & hope that they will be cutting back approximately 10 Million Barrels, and maybe substantially more which, if it happens, will be GREAT for the oil & gas industry!

The Saudi Press Agency has since reported government calls for another "emergency OPEC+ meeting" in a "fair agreement" that includes oil output cuts from "all countries" will be sought in order to "stabilise the market," which is code for rigging the market in favour of higher prices. Currencies of oil producing but non-OPEC nations like Canada and Norway rose sharply in tandem with a 20% increase in the price of some oil benchmarks.

Oil prices had fallen more than 60% for 2020 in response to a possible price war between Russia and Saudi Arabia as well as the unrecedented blow dealt to the global economy by the coronavirus that escaped China's borders in what is believed to have been January. Those declines crushed oil-linked currencies like the Canadian Dollar and Norwegian Krone, which both came back out of their corners swinging late Thursday in response to the developments.

Rising oil prices and a windmilling Loonie stopped the Pound-Canadian Dollar rate in its tracks where before the British currency had outperformed all of its major counterparts. The exchange rate was quoted -0.14% lower at 1.7490 following the various statements after having traded as high as 1.7692 earlier in the session, although it could face losses that set it as far back as 1.72 before finding support on the charts, should the Canadian Dollar continue its riposte to the British unit's earlier advance. 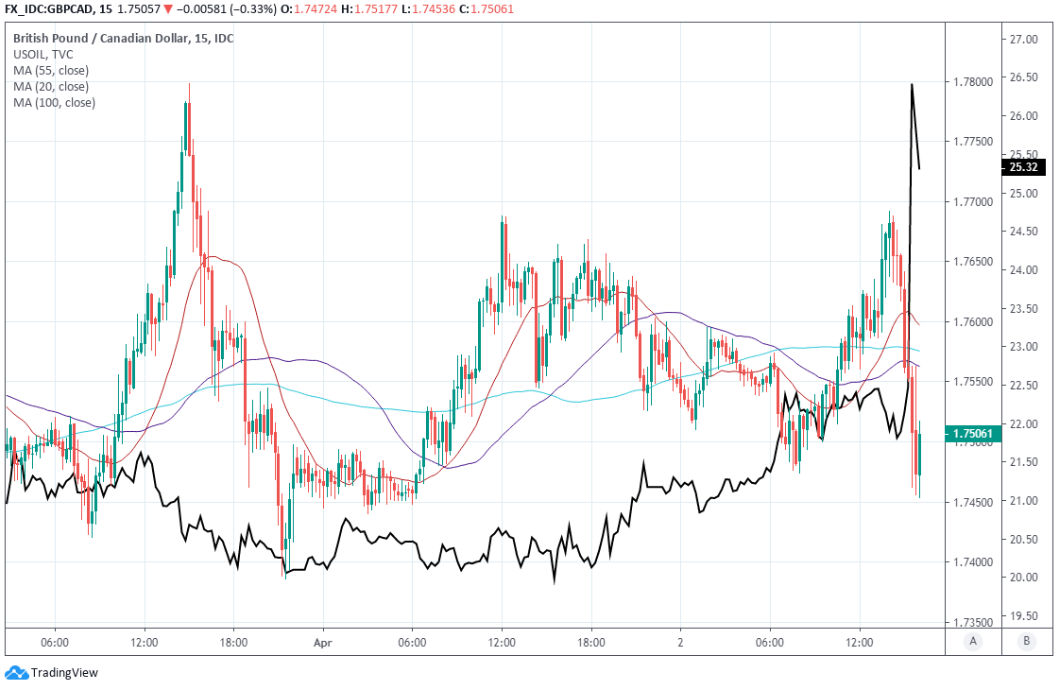 There is a cluster of key moving-averages located around 1.72 on the four-hour, daily and weekly charts that could provide the Pound-to-Canadian Dollar rate support if the downward move is sustained, although what happens after that point might depend heavily on developments at the OPEC table and those around the spread of coronavirus in the UK, Canada and further afield. 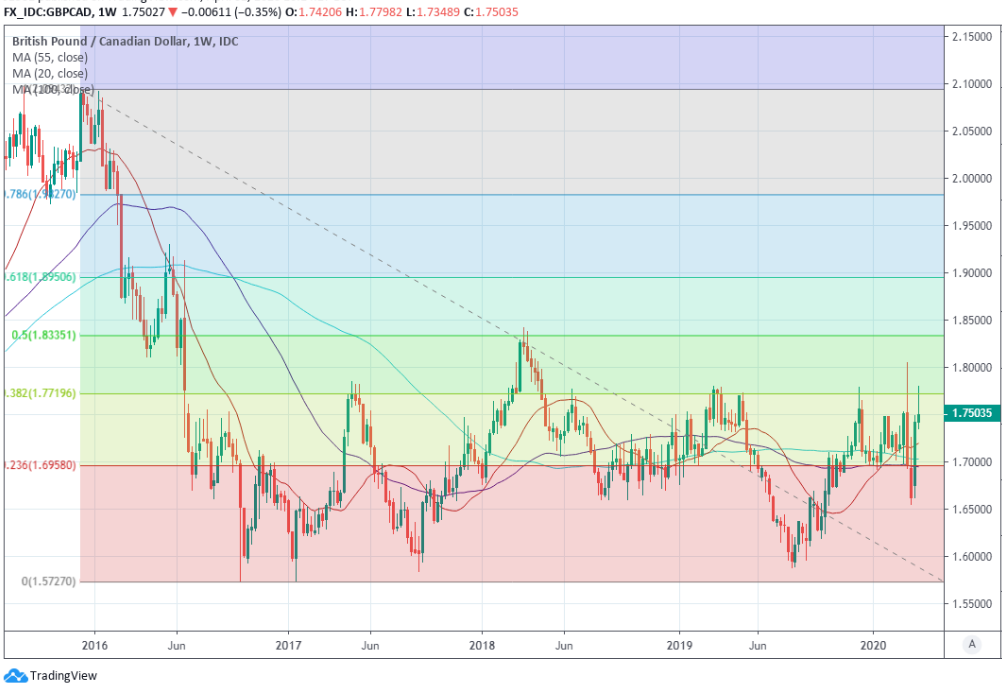 Price action follows bullish developments on the long-term charts and comes after Canada's government threw its own version of the kitchen sink at the coronavirus pandemic on Wednesday. The federal government said from Ottawa Wednesday that it's prepared to spend up to $71bn in order to pay private sector wages of up to C$847 per week for workers in industries that have been hit hard by efforts to contain the deadly viral pneumonia.

Government guarantees of loans for private companies have also been announced alongside a range of other measures, although most analysts still see huge increases in unemployment and historic falls in GDP in the pipeline.

"The subsidy will cover 75% of a worker’s pre-COVID earnings for up to 12 weeks, up to a maximum of about $10,000 per worker," says Colin Guldimann at RBC Capital Markets. "As always, the devil will be in details: many of the firms most impacted by COVID-19 have little cash held in reserve and thin margins (retail trade, restaurants, etc.) For these firms, three to six weeks may be too long to wait for an infusion of cash. If the Government’s small business loan guarantees flow out quickly over the next few weeks, they could provide a good stop-gap measure for these firms. But even those with a relatively modest staff count would quickly see the $40,000 loan limit depleted by payroll obligations."

Canada's coronavirus cases rose to 10,132 on Thursday, up from 9,017 although the country is now in its own form of 'lockdown' similar to those seen in other economies across both the developed and developing world. Meanwhile, the global count of confirmed cases was rapidly approaching the 1 million threshold on Wednesday, with fatalities approaching 50K although it remains to be seen if both tallies will cross those milestones on Thursday or Friday. 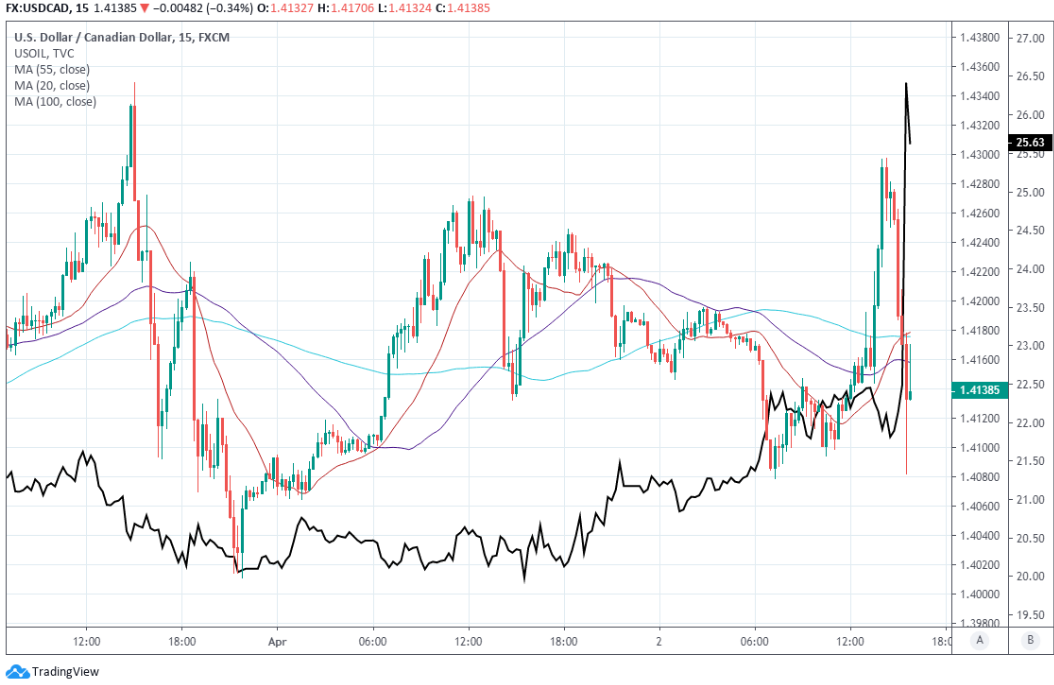