- GBP/CAD uptrend intact after near miss on charts last week.

- Enabling GBP/CAD to climb, although Brexit talks a risk for GBP.

Earlier losses led the Pound's post-summer uptrend to almost fold in on itself when prices fell briefly below the 1.7115 level that's been identified as a key technical support on the charts, although the exchange rate did not close the session beneath that threshold which means it still retains an upside bias.

"We think the GBP should remain well-supported above 1.71 and if the cross can maintain a positive undertone, it should put incremental pressure on the upper 1.73 zone. Bullish momentum should pick up more above here and push on for a retest of key, long run resistance now at 1.7750/00," says Juan Manuel Herrera, a strategist at Scotiabank, in a Tuesday note to clients. 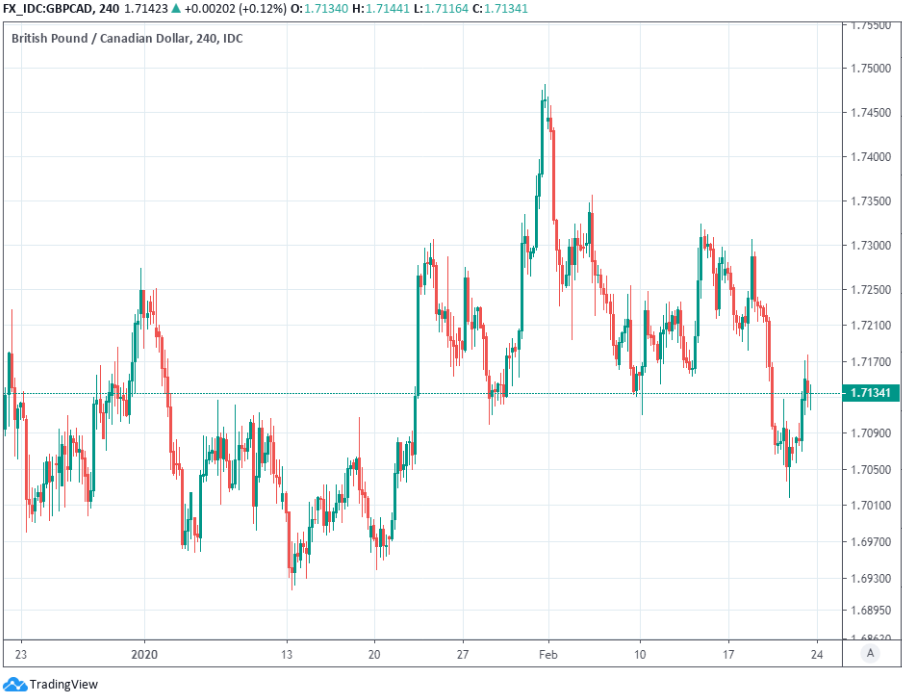 The Pound-to-Canadian Dollar rate has been trending higher since August 2019 although where it heads next will depend on the relative performance of the GBP/USD and CAD/USD rates, given the GBP/CAD rate always closely matches divided over the latter.

And there's good reason to expect the CAD/USD rate could find itself on the back foot to a greater degree than Sterling early in the new week given the likely implications for oil prices of the weekend's coronavirus developments, which could provide the Pound-to-Canadian Dollar rate support early in the new week.

South Korea, Japan and Italy reported small clusters of coronavirus cases last week, stoking fears that the outbreak of the deadly pneumonia like disease could drag on for longer than was initially envisaged by investors and do more economic damage. And South Korea raised the alert level to its highest at the weekend after the number of infections surged from 204 on Friday to more than 600 Saturday, while Italy has quarantined villages and towns in the north after it discovered a total of 130 cases - up from single digit numbers on Friday. 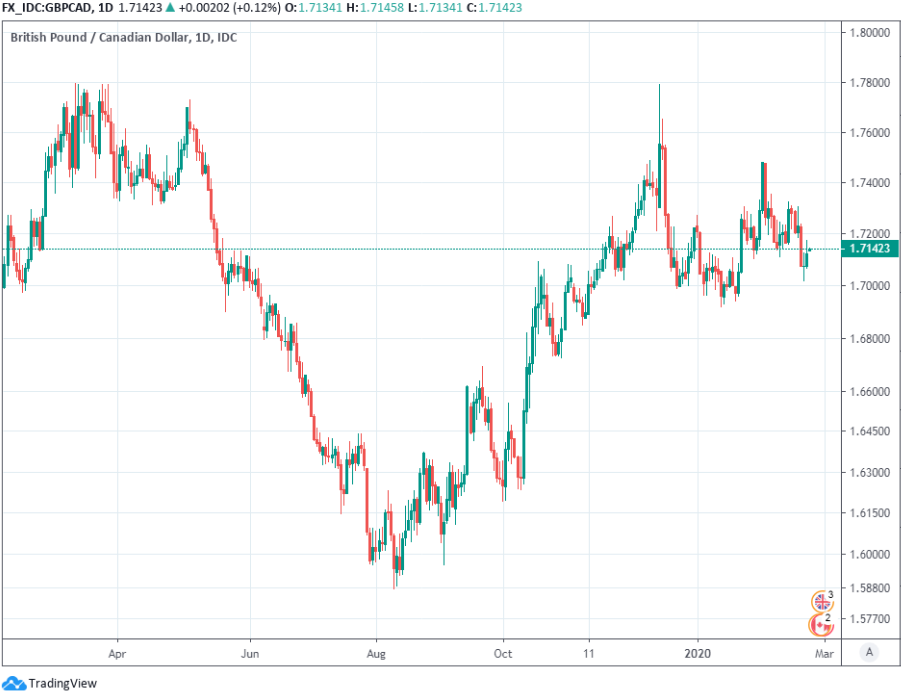 Sterling ceded ground to most rivals last week and with the economic calendar falling quiet this week the negative tone of Brexit negotiations and other international factors are expected to drive price action over the coming days.

“The first official data for January piled more evidence onto our view that the economy will rebound in Q1 2020 after hitting a nadir in Q4 2019. But the growing impact of coronavirus on China's economy and the weakness in the euro-zone threaten to stifle UK GDP growth over the next few months,” says Thomas Pugh, an economist at Capital Economics. “There is growing evidence that the prolonged shutdown of much of China’s economy could restrain UK manufacturing output and possibly even retail sales over the next couple of months. Indeed, the economic fallout from the coronavirus means the global economy may not grow at all in Q1."

Beyond the Brexit talks, Pound Sterling will be driven by risk appetites and the movements of other currencies.

And risk appetite has for weeks been driven by the ebb and flow of market concerns over the coronavirus that’s now escaped China’s borders.

The Canadian Dollar was the best performing major currency last week but it faces downside risks in the coming days given the international spread of coronavirus and its impact on oil prices.

Canada's Dollar was buoyed by rising oil prices and resilient bond yields last week but those two tailwinds could turn to headwinds from the open on Sunday as markets respond to the latest adverse coronavirus headlines.

Already the disease was having a severe effect on international supply chains when it was contained to China but since it's now escaped into the wider world, that impact could grow larger and further dent expectations for global growth and asset price performance.

That would be bad for the Loonie given that oil is Canada's largest export and prices would tumble with expectations for global demand, although those adverse effects could be magnified by losses for stock markets, which the Loonie is also positively correlated with. And if a global downturn does begin to crystalise, the Bank of Canada (BoC) might then be more likely to cut its cash rate and undermine what is the Loonie's most significant crux of support.

"Q4 domestic data retain a soft undertone and the early 2020 outlook has been overshadowed by the coronavirus outbreak. The house call remains an outlier for the March 4th BoC policy announcement – Scotiabank expects a 25bps cut – relative to a consensus amongst economists for an unchanged O/N target rate of 1.75%. Market pricing is leaning towards an ease but not convincingly," says Shaun Osborne, chief FX strategist at Scotiabank.

The BoC has left its cash rate unchanged at 1.75% since October 2018 even as other central banks cut rates because of a standout performance from the economy, which made the Loonie the highest yielding and best performing major currency of last year. But Canada's economy has softened in recent months and analysts are now debating how long it will be before the BoC cuts the cash rate to 1.50%. Scotiabank says March and others say April but a majority says a cut won't come until mid-year.

The BoC said itself in January that it'll be watching households closely in the months ahead and basing its rate decisions substantially upon its interpretation of the outlook for Canadian consumer spending. The housing market and business investment have also both been flagged by the bank as among Canada's three "sources of economic resilience," although the outlook for all three is increasingly uncertain.

"We expect USD/CAD to remain relatively supported in the short-term and as long as coronavirus fears keep markets jittery," says Francesco Pesole, a strategist at ING. "Looking beyond, we expect CAD to lead the rebound in risk-sensitive currencies thanks to its highly attractive carry, even if the BoC delivers a one-off insurance cut. We expect USD/CAD at 1.26 in 4Q20, with most of the downturn likely materializing towards the second half of the year."

December's GDP number is due for release on Friday at 13:30 and will reveal to markets whether the economy continued to underperform BoC forecasts into year-end, which is important because the bank put markets on notice that a rate cut will follow any signs that the economy is not living up to its forecasts. Markets are looking for December GDP growth of 0.1% and for a quarterly expansion of 0.3%, just like the BoC.

And the Loonie is not prepared for a rate cut any time soon. Pricing in the overnight-index-swap market implied on Friday, an April 15 cash rate of 1.63%, which suggests investors see the odds of a rate cut at that meeting as being very much 50/50. This poses both upside and downside risks for the Canadian Dollar over the coming months.

"There are hardly any signs that the economy is in the midst of a strong rebound from the weakness expected to show up in the Q4 GDP report. The coronavirus is affecting the energy sector, travel and tourism, and now manufacturing supply chains. Furthermore, disruptions to Canada’s rail network are depressing activity across a number of industries. That could be enough to lower tracking estimates below the Bank of Canada’s already muted expectations for Q1, thereby making an interest rate cut more likely," says Andrew Grantham, an economist at CIBC Capital Markets.