- CAD gets no reward for strong jobs data as GBP, USD rise.

- After CA economy posts another 35k jobs increase in Jan.

The Canadian Dollar underperformed some rivals Friday as markets overlooked a strong January jobs report amid a downward correction in risk assets that's seen oil prices revert to the downside ahead of the weekend.

The Pound-to-Canadian Dollar exchange rate recovered its poise Friday to reclaim the 1.72 handle as Sterling bounced back from days of punishing losses while Canada's Loonie corrected lower in the wake of strong gains that came alongside an earlier speculative recovery in oil prices.

Canada's Loonie ceded ground to Sterling as well as the safe-havens that are the Japanese Yen, U.S. Dollar and Swiss Franc Friday despite employment numbers that should have helped further dispel some of the more pressing Bank of Canada ( BoC) concerns about the economy.

"Canada's labour market opened 2020 in the same way it closed 2019, with solid job creation reported for the month of January," says Royce Mendes, an economist at CIBC Capital Markets. 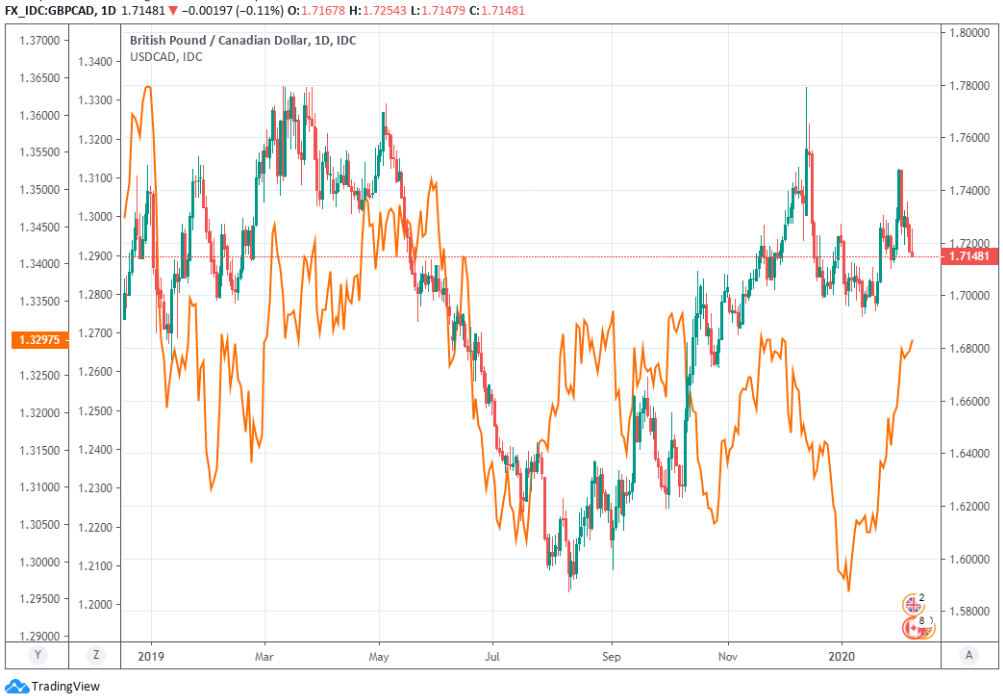 The Canadian labour market created 34.5k new jobs last month, building on a similarly sized increase from December, which helped drive the unemployment rate down from 5.6% to 5.5% when markets were looking for gains of only 16.3k and a jobless rate of 5.7%.

Friday's numbers draw a definitive line under the November report that spooked markets with a sharp 40 basis point rise in the jobless rate. Since December the enigmatic Canadian labour market, often described as a random number generator by some observers, has boggled the minds of investors, economists and BoC policymakers alike.

"We always caution investors to take any individual Labour Force Reading with a grain of salt, but the continuation of job creation is putting some of that prior weakness further in the rearview mirror. The data should be negative for fixed income today, although the exchange rate might see less of a move with the US payrolls data also showing a heady advance," Mendes says.

The tentative situation of workers and households has clouded the outlook for BoC interest rate policy, which has been the single greatest crux of demand and ultimately, support for the Canadian Dollar. This is because the 1.75% cash rate is the joint  highest among major currencies and has supported elevated bond yields that have proven a draw for yield-hungry investors. 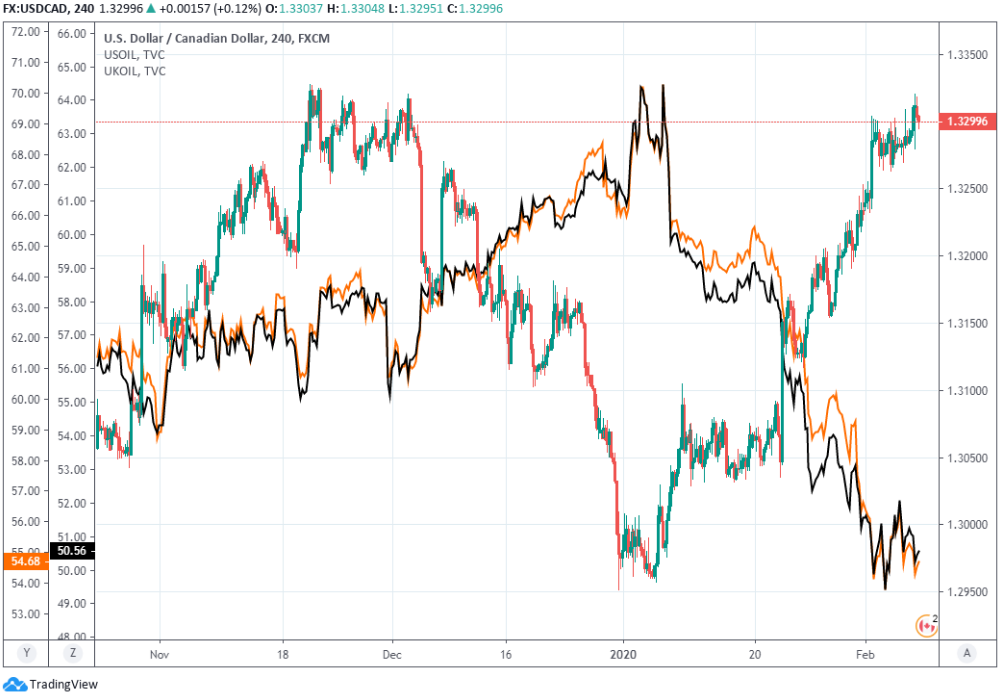 "The blistering pace of hiring seen in Canada between late-2018 and mid-2019 has faded, but today's data suggest the labour market is far from grinding to a halt," says Josh Nye, an economist at RBC Capital Markets. "Today's data reduce the urgency for the BoC to lower rates (market pricing for a cut pushed back from September to October) though we continue to think the door is open to a rate cut if the economy's rebound early this year proves underwhelming."

Canada's Dollar went unrewarded for its healthy jobs growth because of a downward correction in the price of oil, the country's largest export, and other risk assets ahead of a weekend that could bring a negative turn in the coronavirus newsflow emerging from China. Chinese officials say the spread of the infection, which has reached most major economies in some capacity, has slowed which has led to a relief rally in previously-bruised risk assets like oil.

However, the correction in oil has a direct bearing on the outlook for BoC interest rate policy, given the oil patch is an important contributor to economic output and the bank has itself made the trajectory of global growth a consideration in its deliberations. This, and uncertainty about whether China really has got a grip on the situation on the ground, could be why the Canadian Dollar has been largely neglected by the market throughout the week. 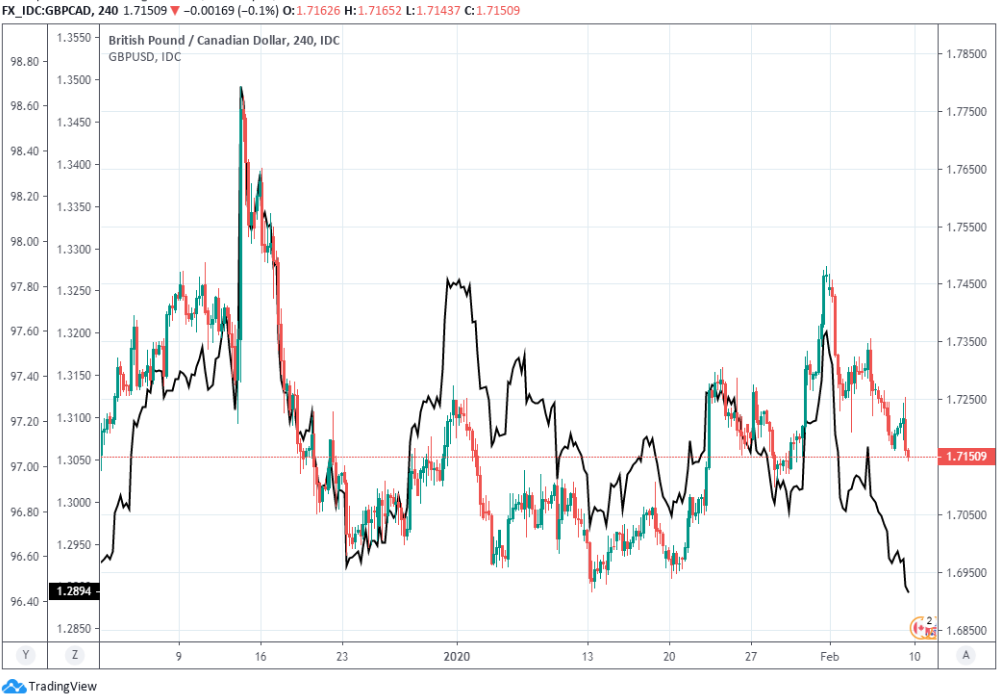 "The topside break from the range tilts risks towards a retest of 1.3345/55. But we also note that USD gains have flattened out through the latter part of the week, suggesting some exhaustion in the rally. Support is 1.3265," says Juan Manuel Herrera, a strategist at Scotiabank, referring to USD/CAD. "[Sterling] has found tentative support on the short-term chart at 1.2920 over the past 24 hours, coincident with support derived from the 38.2% Fib retracement of the 1.19/1.35 rally through late 2019/early 2020. Gains through 1.2945/50 should signal additional, if modest gains in the short term towards the upper 1.29s."

The Pound-to-Canadian Dollar rate is battling to sustain a six-month uptrend and although it remains an open question as to whether it will ultimately prevail, the relative outlook for price action in the GBP/USD and USD/CAD rates can provide an indication of what might be in store on the path ahead.

This is because the exchange rate always closely matches the sum of GBP/USD over CAD/USD so can be characterised as a bit of a race between Sterling and the Loonie, against the U.S. greenback.

In other words, the outcome of Sterling’s ongoing battle to hold above support around 1.29 against the U.S. Dollar will be key to the trajectory of the GBP/CAD rate over the coming days. But so too will the result of a USD/CAD attempt to sustain a push above the 1.33 top of its own six-month range. 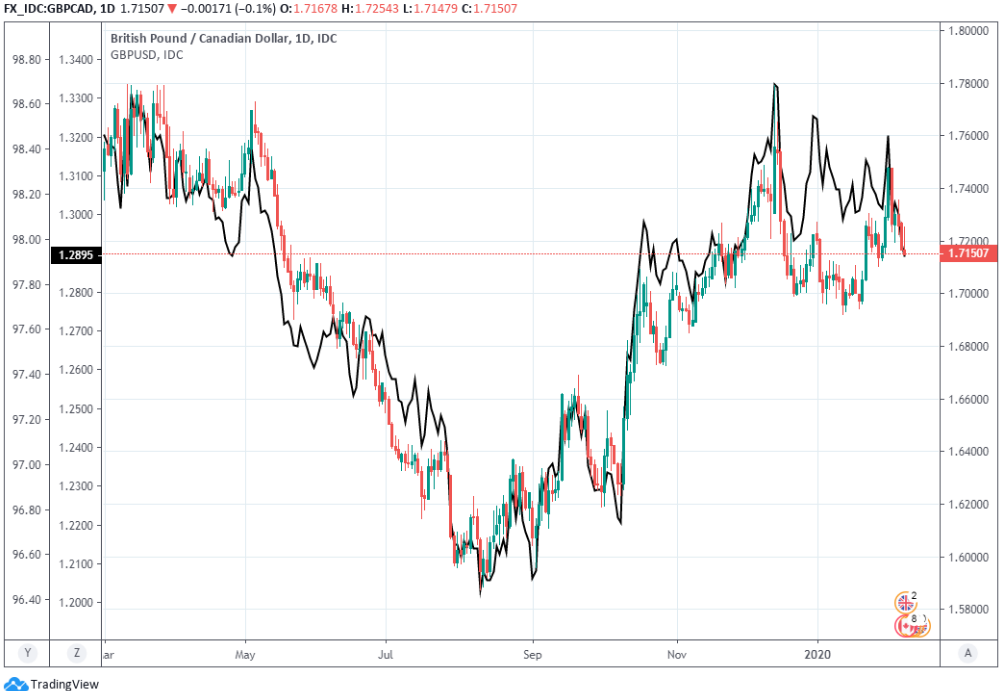 “The US dollar is at it again, but at it in slow-motion as it pushes to new local highs in several places without showing much momentum, to the frustration of momentum traders everywhere. Today we focus most on GBPUSD downside risks,” says John Hardy, head of FX strategy at Saxo Bank. "GBPUSD has broken lower as of this writing. Among other USD pairs within the G10, USDCAD is poised right at resistance."

Saxo Bank's Breakout Monitor has identified Sterling as a good candidate for short-selling while Hardy advocated on Thursday that clients bet on a fall from 1.2960 to 1.2710 against the U.S. Dollar. The bank also has a bullish view of the U.S. Dollar across the board and is growing concerned about the outlook for commodity prices in light of the coronavirus outbreak and uncertainty, if not outright doubt, about the reliability of China's disclosures on the matter.

"The world faces its biggest demand shock since 2009. Commodity markets continue to bear the brunt of the coronavirus outbreak in China. While stocks, led by the U.S. technology sector, resumed their rally and reached new highs, the Bloomberg Commodity Index traded lower for a fifth week and down by 6.4% since January 17th when China finally alerted the world about the severity of 2019-nCoV outbreak. We remain concerned that the full impact of the slowdown in China and abroad, with the exception of commodities, is not being properly priced in," says Ole Hansen, Saxo Bank's head of commodity strategy.

The Pound-to-Canadian Dollar rate was stabilising around a key level on the charts Tuesday even after the UK entered its first day of a so-called 'lockdown,' although it might need the improved mood music in the market to endure in order to avoid fresh losses over the coming days.