- U.S. Trade Rep said to be en route to Mexico for signing.

- But U.S.-China tensions linger ahead of Sunday deadline.

The Canadian Dollar has recovered some of last week's losses after U.S. officials said the long-awaited USMCA agreement with Mexico and Canada had been officially signed Tuesday, although the Canadian currency is tipped to remain shaky ahead of an impending deadline in the U.S.-China trade conflict.

U.S. Trade Representative Robert Lighthizer said Tuesday he has officially signed an update of the North American Free Trade Agreement, once described by President Donald Trump on the campaign trail as "the worst deal in history".

The agreement is a renegotiated NAFTA, pledged by President Trump during the 2016 election campaigns and its signing brings onto the horizon the possibility of an end to uncertainty over the trade pact's future, which dates all the way back to the beginning of the White House incumbent's tenure.

With the outlook for U.S.-Canada trade becoming a little clearer, it is understandable that the Canadian Dollar would find support on the final signing of the agreement.

“Thanks to President Trump’s leadership, we have reached an historic agreement on the USMCA.  After working with Republicans, Democrats, and many other stakeholders for the past two years we have created a deal that will benefit American workers, farmers, and ranchers for years to come.  This will be the model for American trade deals going forward,” Lighthizer said in statement following the signing. 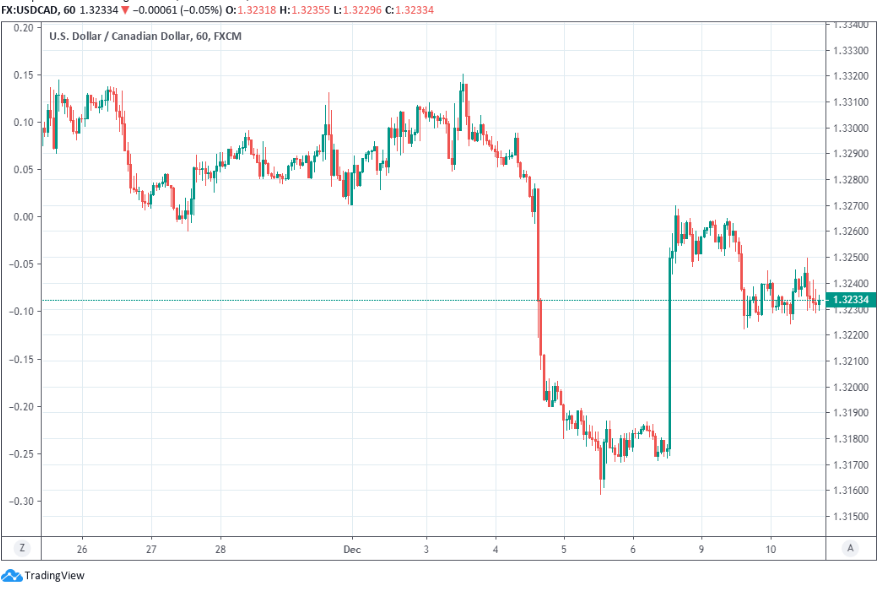 Mexican President Andres Manuel Lopes Obrador had said earlier on Tuesday that a deal had been reached with the U.S. and Canada over labor, steel and aluminium just before Politico reported that Texas Representative Kevin Brady had said in a closed-door meeting of Republican leaders that Lighthizer was en route to Mexico in order to sign the new agreement on behalf of the U.S.

The pact was already agreed between signatories in October 2018 but uncertainty about whether it would garner enough support in the ratification stage on the U.S. side has so-far prevented it from being formally signed. Tuesday's signing means the three countries have a hand-shake deal that will be put to a vote in Washington over the coming days.

President Donald Trump said on Tuesday the pact enjoys "very good" support from the Democratic Party, which now controls the House of Representatives.

"A reduction in trade policy uncertainty would be a welcome development for the Canadian economy which has started to display more evidence of weakness recently,” says Fritz Louw, a currency analyst at MUFG. 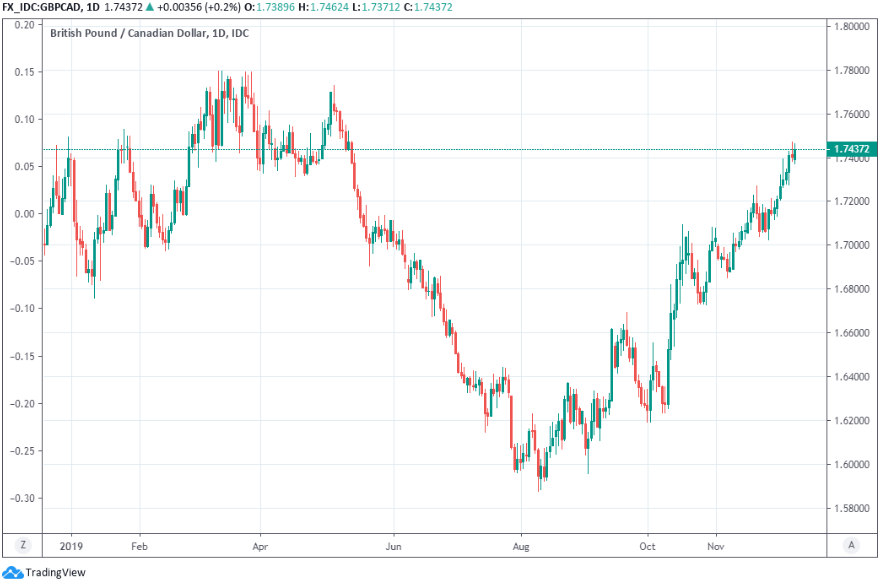 The Canadian Dollar was quoted higher against its U.S. rival Tuesday but lower against Pound Sterling, which is now the best performing major currency of 2019 amid fresh pre-election gains.

Canada's Loonie was higher against most of its 'risk' rivals Tuesday but lower against safe-havens like the Yen, Swiss Franc and Dollar. The Swedish Krona also got the better of the Loonie again as it continues to heave itself back from the edge of abyss it spiralled into during the negative interest rate years, which have their roots in the weak Eurozone economy and Frankenstein's Monster-like monetary policies of the European Central Bank.

Going forward, price action in foreign exchagne markets will likely be dictated by lingering uncertainty over the trajectory of U.S.-China trade relations, which are also important to the Canadian Dollar outlook as the Bank of Canada (BoC) has said it will set domestic interest rates according to the impact the ongoing tariff fight is having on Canada's economy.

"We think relatively firm crude and CAD-supportive spreads suggest the CAD could be, perhaps should be, trading a little firmer against the USD. These factors should at the very least limit USD upside to the upper 1.32s/low 1.33s," says Shaun Osborne, chief FX strategist at Scotiabank. "The USD closed out the week overall with a loss that really should imply limited upside potential and more downside risk going forward." 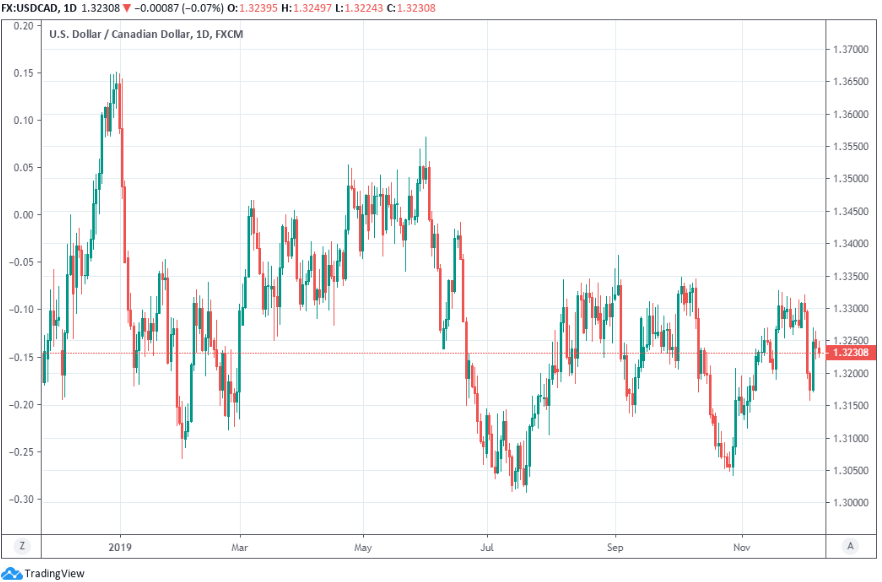 Canadian employment shrank by -71.2k jobs in November and the unemployment rate rose 40 basis points to 6.3% in a straight line, just days after the BoC surprised markets by junking its earlier pessimism and sounding an almost-hawkish tone as far as the outlook goes.

Canada's jobs data was out at exactly the same time the U.S. Bureau of Labor Statistics dumped a blowout nonfarm payrolls report on the wires, which showed the U.S. economy created more jobs in November than it has in any other month since December 2018. That, and a multi-decade low for the jobless rate has boosted the greenback and lifted USD/CAD but the most important factor in determining the trajectory of the latter in the months ahead will be the BoC.

"Weaker employment data though will keep alive expectations that the BoC may still have to cut rates in 2020," MUFG’s Louw writes in a note to clients. "It leaves the Canadian Dollar struggling for direction in the near-term as USD/CAD contuse to trade in line with its average since the summer of around 1.3240...USD/CAD would have to break out from its current trading range between 1.3150 and 1.3350 to trigger more excitement that the current consolidation phase is ending." 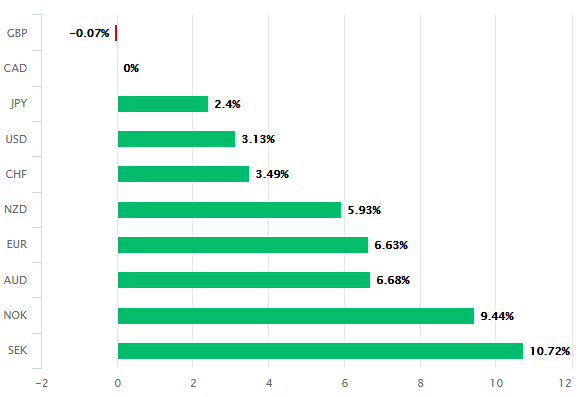 Louw says the signing of the USMCA deal could help to soften the blow of last Friday's jobs report for the Canadian Dollar especially as it relates to interest rates at the BoC, which has put "trade conflicts" at the centre of deliberations on monetary policy because of the impact that adverse developments on that field can have on economic growth and inflation.

However, he also says USD/CAD should remain confined in weeks ahead, to the 1.3150 to 1.3350 range that’s prevailed for much of the time since August.

The Pound-to-Canadian-Dollar rate is a different story because its fortune will be made or lost by voters in Thursday’s UK general election.

Thursday’s outcome, which will become known in the early hours of Friday, could be the difference between the GBP/USD rate finishing the year at 1.20 and 1.35, with implications of a similar order for the GBP/CAD rate. 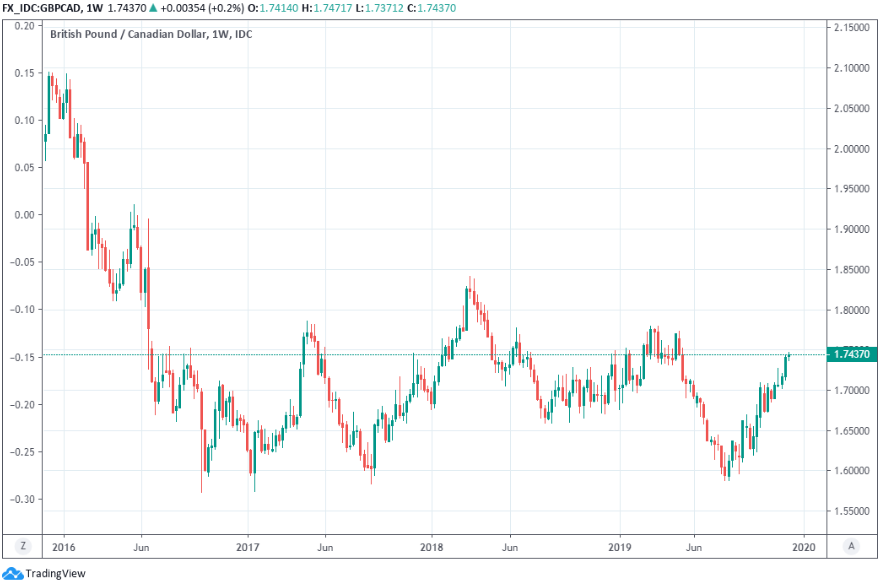