- USD/CAD and GBP/CAD both seen hitting new lows by year-end.

The Canadian Dollar is likely to retain its top position in the G10 league table through the end of 2019 according to strategists at ING Group, who're just the latest to tell clients they should keep buying the Loonie and looking for a continued strong performance against a range of rivals this year.

Canada's Dollar was lower against the greenback Monday after Presidents Donald Trump and Xi Jingping agreed a ceasefire in the trade war between the world's two largest economies, although it's still riding high at the top of the G10 league table for 2019.

Gains built in June when a range of official numbers suggested the economy is picking up from a two-quarter lull and, with inflation remaining near the 2% target of the Bank of Canada (BoC), the Loonie has been spared the kind of speculation about rate cuts that hurt the U.S. Dollar so much last month.

"The largest risk to an open economy like Canada and its currency are the ongoing trade tensions. The recently-agreed trade truce and the restart of negotiations for a deal between the US and China will probably keep market risk sentiment supported for some time," says Francesco Pesole, a strategist at ING. "We think there are at least five reasons which suggest positives will more than offset most trade-related downside risks and keep the Canadian dollar on an appreciating path." 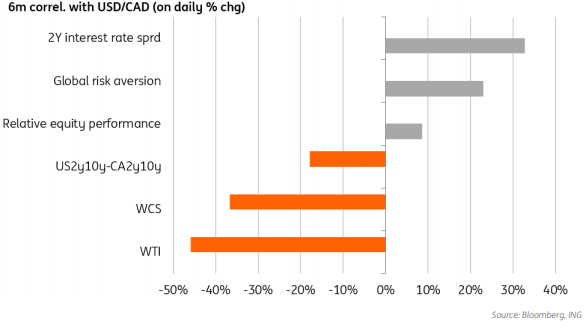 Pesole says the detente agreed between leaders of the world's two largest economies at the G20 summit in Japan this weekend just passed will support investors' appetites for risk assets including the Canadian currency, although he and the ING trade team doubt the truce can be maintained.

They've warned that another escalation of the trade conflict, possibly in the third quarter, might pose a temporary challenge for the Canadian Dollar although they still see the currency retaining its crown as the developed world's best performer regardless of what happens between the U.S. and China.

"The recently-agreed trade truce and the restart of negotiations for a deal between the US and China will probably keep market risk sentiment supported for some time. Although looking ahead, our trade team is reluctant to exclude a reescalation of trade tensions, and we don't exclude the US imposing fresh tariffs on Chinese exports as early as in 3Q," Pesole says.

President Trump agreed at the weekend's G20 summit in Osaka, Japan that an imminent 25% tariff intended to apply to the rest of China's annual exports to the U.S. would be suspended and American companies will now be allowed to resume their business with Huawei. In return, Chinese leader Jinping agreed to return to the trade negotiating table and to buy large amounts of U.S. agricultural products ahead of any deal over China's "unfair" trading practices.

The accord provides breathing room for the global economy, which has had its wings clipped over the last year by escalating hostilities between the world's two largest economies. It's also positive for the Bank of Canada outlook because policymakers said last month that the international trade environment would be a key consideration in future interest rate decisions. 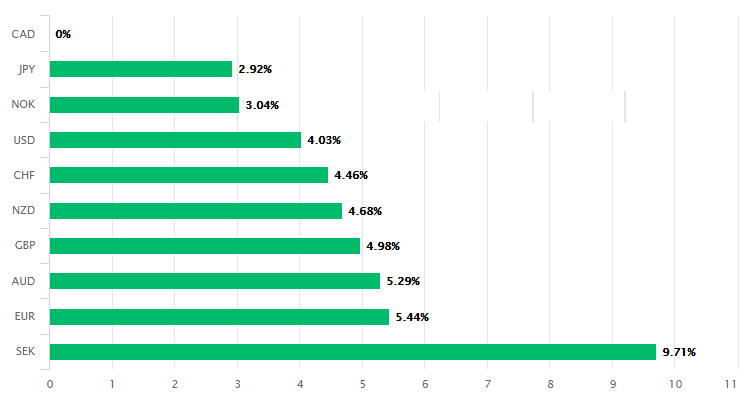 Above: Canadian Dollar performance Vs G10 rivals in 2019.

"We believe a number of indicators likely back the constructive economic view expressed by the Bank of Canada in its latest statement," says Pesole. "Q1 subdued GDP numbers have been negatively affected by a widening trade deficit. A recovery in the deficit has already started to benefit GDP monthly reads (April YoY read at 1.5%), suggesting that the Canadian economy likely bottomed out in Q1."

Canadian GDP growth nearly halved in 2018, falling from 3% previously to just 1.8% last year, after an economic slowdown took hold in the second-half. But the BoC has since said that growth should pick up in the second quarter.

Furthermore,  all of the BoC's preferred measures of inflation of inflation are either testing the 2% target, or are now already well above it, which is important for the Loonie because interest rate decisions are normally only made in relation to the outlook for inflation.

This means the BoC could potentially be compelled to raise its interest rate again over the coming quarters if the economy picks up, because faster growth would also risk stronger inflation pressures. It certainly means that, in the absence of a renewed economic slowdown, the BoC would find it difficult to indulge markets with rate cuts.

Pricing in the overnight-index-swap market has implied at least some probability of a BoC rate cut before year-end through much of the first half of the year, and if the investors who're betting on rate cuts were to stop doing so it could help lift the Canadian Dollar.

"Our economics team expects the BoC to keep rates on hold throughout 2019 and 2020. This is in contrast with markets expectations for some monetary easing ahead, with the OIS curve currently showing -25bp priced in by 2Q20. On the other side of the border, the Federal Reserve is facing increasing pressure to cut interest rates and our economists expect two rate cuts by the end of the year. Such policy divergence is likely to keep the US-Canada interest rate differential under pressure," Pesole says. 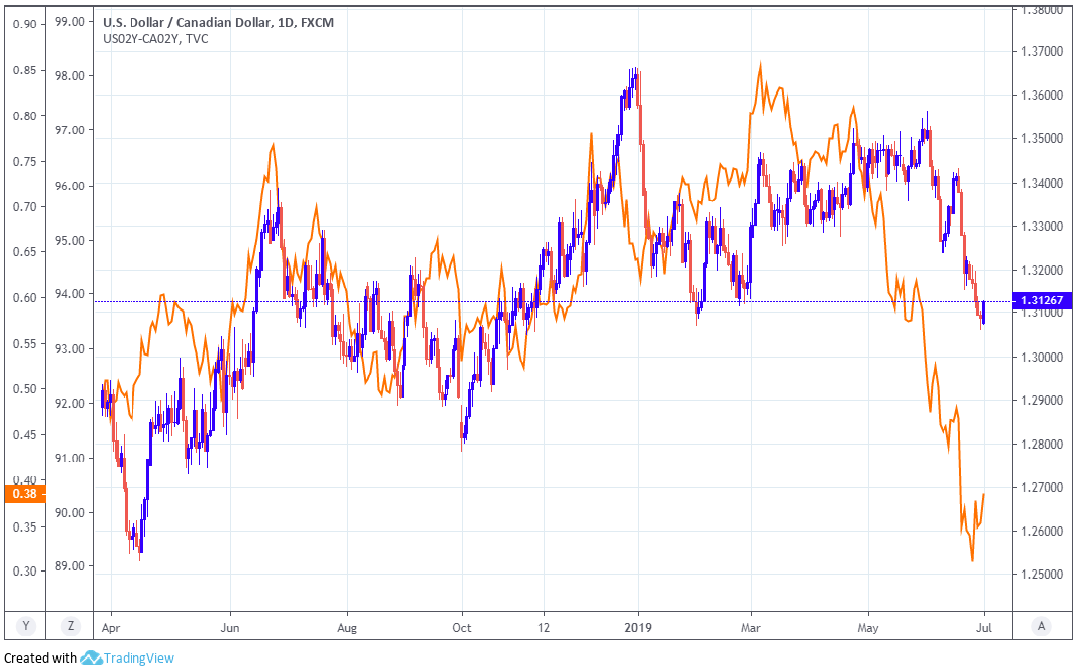 Markets had bet heavily of late the bank would begin cutting U.S. borrowing costs at the end of this month, which has put downward pressure on the U.S. Dollar in a broad sense and also helped drive the USD/CAD rate down from 1.34 at the beginning of June to a little over 1.3050 by last Friday.

The U.S. economy was expected to slow this year even without the May escalation of the trade war, although the manufacturing sector is now showing signs of creaking beneath the weight of tariffs imposed on goods imported from China, which have still not been lifted because the G20 agreement was simply a 'ceasefire' on further levies.

"Investors may see in the loonie an interesting substitute to the US dollar to enter carry trades as the dollar rate advantage staggers. Indeed, CAD is currently the second-highest yielding currency in the G10 space," Pesole says. "We see high potential for CAD to keep outperforming its G10 peers in the coming quarters. Nonetheless, the fall in USD/CAD may be contained around the 1.31-1.32 level until tradetension-related downside risks dissipate."

Pesole and the ING team say the USD/CAD rate will finish 2019 at 1.30, its lowest level since October 2018, after the Federal Reserve cuts its interest rate and the Bank of Canada weathers the storm without reducing borrowing costs for companies and consumers. They also project fresh losses for Sterling, which are expected to drive the Pound-to-Canadian-Dollar rate down to 1.62 by year-end, its lowest level since September 2017. 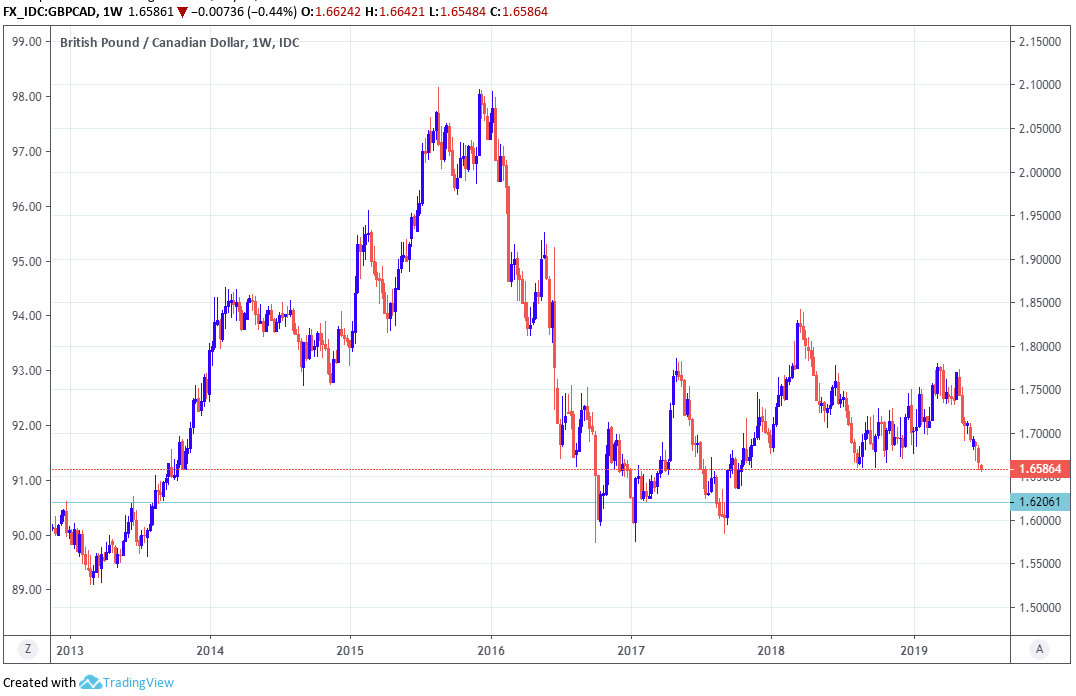