The GBP/AUD exchange rate has been trading sideways over the last week but there is a possibility of further gains as the overall long-term trend is higher.

The pair has been in an uptrend since the October 2016 and the broad uptrend is expected to bias the exchange rate to making even higher highs in the future.

If the exchange rate breaks above the 1.8000 February highs we would expect a likely extension up to an initial target at 1.8100.

Beyond that, the exchange rate might even reach 1.8400 level where the 200-day moving average is situated.

Large moving averages (MA) often act as obstacles to trending prices which stall, pull-back or even reverse trend sometimes when they reach them. 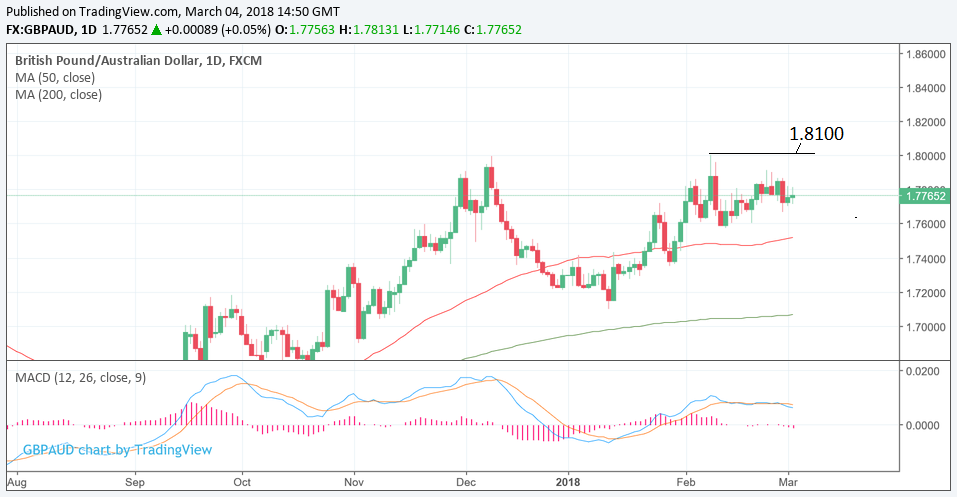 This is due to short-term traders selling at the level of the MAs because they expect the price to pull-back and they want to capitalize on that.

There is also increased buying and selling as instiutional investors often use MAs in their decision-making processes - e.g buy if the price is above the MA and liquidate if it falls below the MA.

Data and Events to Watch for the Australian Dollar

It is a busy week for the Australian Dollar starting with the Reserve Bank of Australia (RBA) rate meeting on Tuesday at 3.30 GMT.

This is a meeting at which the Australian central bank decides what it is going to do with interest rates and although it is not expected to raise analysts will be scrutinizing the language of the statement for hints as to when it might.

The general consensus appears to be for the possibility of one 0.25% rate hike in 2018 or none. Overnight index swaps, which provide a market measure of future interest rate expectations are showing about  50% possibility of a hike in November.

Canadian investment bank TD securities says its "official view is now for the RBA to deliver one hike this year in November. We highlighted this was possibly the earliest the RBA could hike."

They add that, "Governor Lowe's comments to the House of Reps Standing Committee that wages growth of 3.5% would be required to achieve annual inflation of 2.5% left clients believing chances of a rate hike as less likely this year but more likely next year."

Another major release for the Australian Dollar in the week ahead is the Q4 GDP growth rate which is forecast to show 0.6% growth from Q3 and 2.7% from a year ago, when it is released on Wednesday at 00.30. The higher the figure the better for the the Aussie.

Other significant data is released just before the RBA meeting, at 00.30 on Tuesday, including the current account in Q4 and retail sales in January.

A wideing deficit will weigh on AUD whilst stronger retails sales will support the currency.

The Pound was largely unmoved at the end of last week as Prime Minister May delivered her 'road to Brexit' speech which offered little fresh information to investor.

The response from Europe has been mixed and there remains a question mark over whether the EU will sanction a transitional deal at its summit on March 23. A failure would to sanction a transitional period would be negative for the Pound, but markets appear to be willing to keep Sterling and the Euro stuck in the alread mentioned tight range until they get a clear steer on how talks are progressing.

In the week ahead there are reports the Chancellor Philip Hammond will also be making Brexit speech, focusing on the subject to a bespoke deal for the UK's dominant services sector. The UK has a services sector trade surplus with Europe so this could be important for the Pound, however, whether Hammond's proposals are likely to be accepted by Brussels is a different matter.

Staying on the topic of the services sector, the data highlight of the week comes in the form of IHS Markit's services PMI for February which will give a steer as to how well the sector performed.

Markets are looking for a reading of 53.3, which would be a shade up on January's 53.0. A beat on this estimate could give Sterling a nudge higher. A miss, the opposite effect.

However with the Brexit being the key driver of Sterling at present we would expect a large deviation on expectations in the data to move the currency; particularly against the Euro.

"We look for the services PMI to slip from 53.0 to 52.5 in February (mkt 53.2). We know that retail sales had a rough start to the year, with their largest 2-month drop over Dec-Jan in a year, and with the cold weather in February we can probably expect another soft month for consumer spending, weighing on overall services sentiment," says a note from TD Securities ahead of the release.

Watch Friday's Trade Balance data for January, which is forecast to show the deficit narrowing to -12.2bn from -13.6bn previously, when it is released at 09.30 GMT.

Industrial Production is out at the same time and is forecast to show a 1.1% rise month-on-month in January.

Manufacturing Production, also out at 09.30 on Friday, is forecast to rise by 0.2% in January compared to the previous month.