The Australian Dollar is softer at the start of another week that could well centre on developments in China, where authorities are proving eager to push back against rumours they are willing to reconsider their zero-Covid policy.

The Aussie was a laggard after China’s National Health Commission (NHC) reiterated a commitment to eliminating Covid-19 at a press conference on Saturday, warning the situation was set to become even "more severe and complex" as the country entered the winter flu season.

"Over the weekend China authorities reaffirmed a commitment to their zero Covid policy stance. This follows the recent increase in the reported number of infections, which on Sunday rose to the highest level since May. Latest economic data for China showed a smaller-than-expected rise in the country’s trade surplus as weak global demand weighed on exports," says a note from Lloyds Bank at the start of the week.

The Pound experienced its largest weekly drop against the Australian Dollar since February last week amidst rumours China was looking to ease its zero-Covid policy.

The Pound to Australian exchange rate (GBP/AUD) fell 2.83% on the week as investors bet on a Chinese economic recovery, its largest weekly decline since the week starting Feb. 28.

"The NZD and AUD were almost 3% higher, helped by the surge in the CNH and broader optimism around China," says Nick Smyth, an economist at BNZ.

GBP/AUD is currently quoted a quarter of a percent higher on the day at 1.7635, taking bank payment rates to approximately 1.7148 according to our data, meanwhile rates at competitive specialist payment providers are closer to 1.7589. 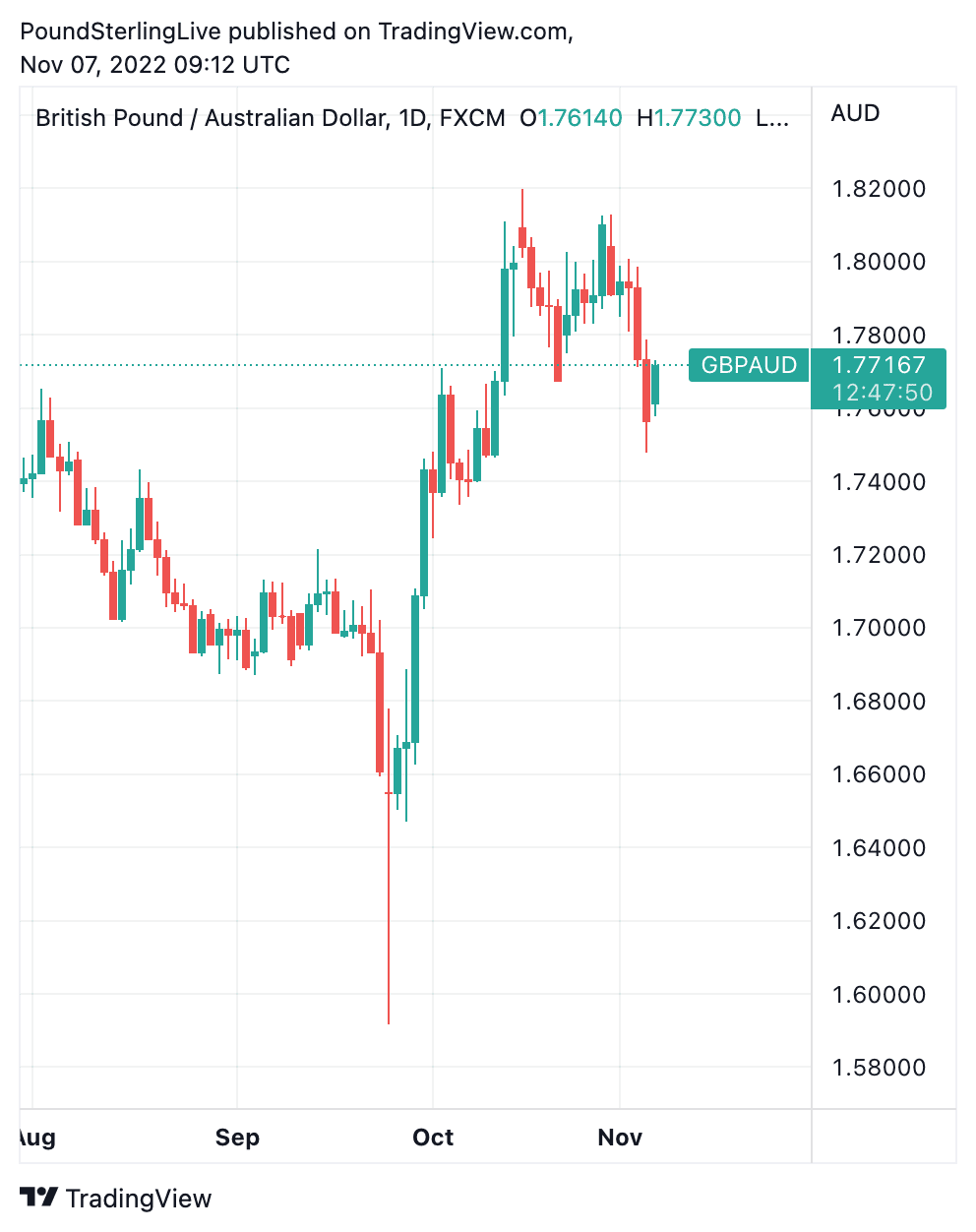 "The AUD has fallen," says Tapas Strickland, an economist at NAB. "Risk appetite soared on Friday as Chinese whispers swept markets last week that China had put together a 'conditional re-opening plan', reportedly mapping out a material re-opening by March 2023. Those rumours were denied on the weekend."

"AUD gains have been pared, with the AUD falling this morning," he adds.

Hu Xiang, an official at China's NHC said on Saturday, "practice has proved that our pandemic prevention and control strategy . . . [is] completely correct, and such measures are proven the most economical and effective."

The statement pushed back against a market rally sparked by Dr Guang Zeng, a former Chinese Center for Disease Control and Prevention (CDC) senior official, who told a conference he expects "substantive changes" to the current zero-COVID policy soon, predicting they will come "before spring."

Bloomberg reported on the same day of talk that rules governing air traffic into China were set to be relaxed.

The Australian Dollar's retracement of the previous week's losses is nevertheless well contained, suggesting investors believe China is heading to a loosening in controls, despite the official pushback.

"Despite the denial, notions that China will pivot to living with Covid in the new year are unlikely to be quashed given the very real toll that zero-Covid is having on the economy," says Strickland.

"Notions that China will pivot to living with Covid in the new year are likely to remain given the significant economic cost of zero-Covid," he adds.

GBP/AUD could therefore likely to remain pressured over the coming days as the AUD takes sustenance from ongoing expectations that China will ultimately ease restrictions.

However, the pace of decline seen in the previous week could also ease as such expectations offer diminishing returns and some analysts are outright sceptical of the prospect of a full Chinese reopening in the near term.

"While it’s tempting to chase AUD higher, I’m going to stick with just the BRL for now as I’m worried that the China reopening trade is 99% a positioning blowout and 1% reality," says Brent Donnelly, CEO of Spectra Markets.

The Pound is meanwhile tipped to remain under pressure following last week's Bank of England policy update where fresh forecasts for an economic recession accompanied a 75 basis point hike.

The Bank said it did not believe interest rates would need to rise as much as markets were expecting, an observation that contributed to Sterling weakness.

Sentiment towards the UK economy remains amongst the worst of all the major developed economies, a situation only fuelled by an excessively pessimistic Bank of England.

This 'pessimism' is explained as such: the Bank's forecasts for an 8-quarter-long recession are conditioned on an assumption the Bank would hike rates to a peak of 5.25%.

The Bank however said this is too high, and expectations have fallen accordingly with a peak now seen closer to 4.75%.

Therefore, a great deal of pessimism towards GBP is centred on an unrealistic outcome.

Regardless, sentiment is a difficult beast to shake; therefore, the UK currency will likely remain pressured going forward.