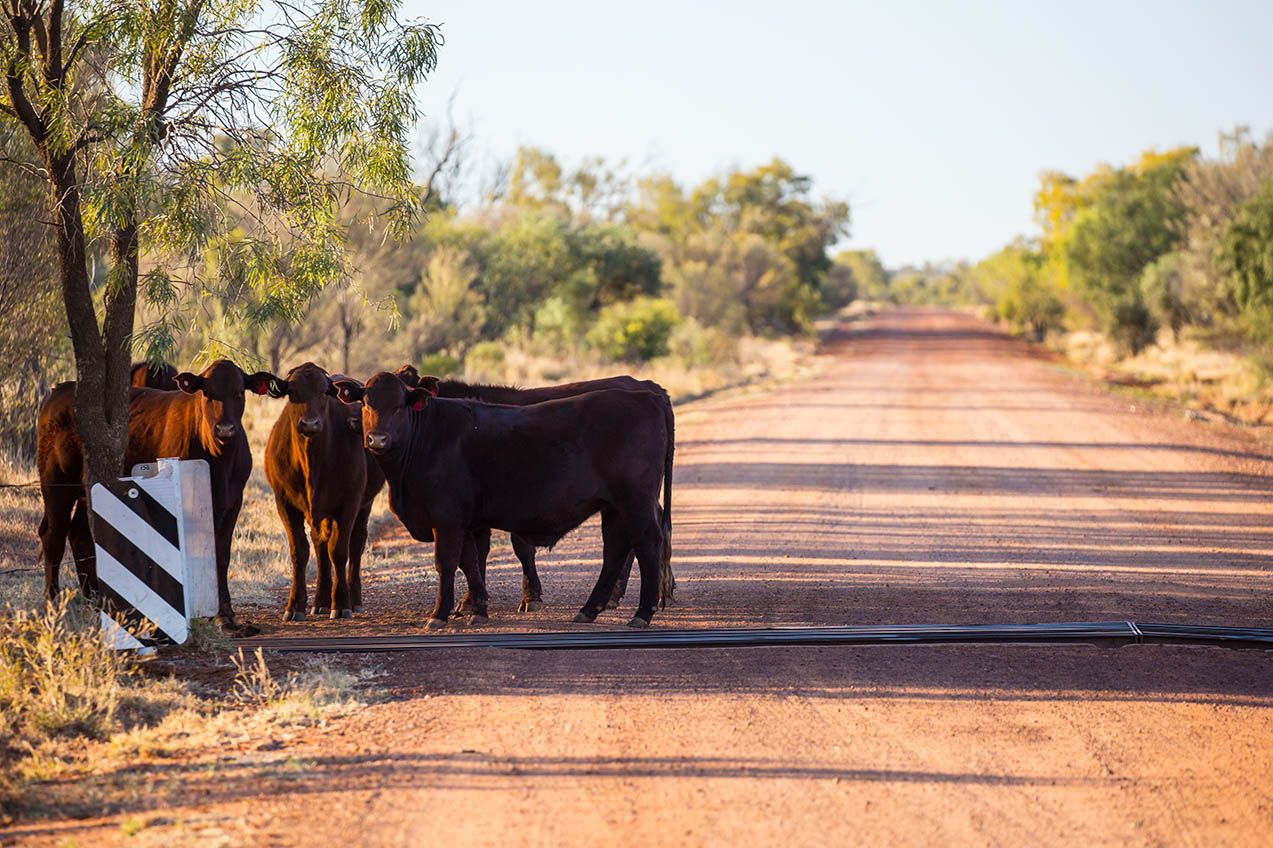 The Pound to Australian Dollar exchange rate entered the new week on its front foot but could be volatile in the days ahead, with both up and downside risks, if forthcoming Federal Reserve (Fed) and Bank of England (BoE) policy pull in opposing directions for GBP/AUD.

Pound Sterling came under pressure against the U.S. Dollar, Euro and Canadian Dollar during the opening session of the week but climbed against other major currencies including the Australian Dollar after international stock and bond markets took another drubbing on Monday.

“The slump in risk sentiment ahead of the FOMC has slammed the A$ below 0.70 with the AUD lower since the RBA announcement against the USD, EUR, GBP and CAD. This highlights the headwinds for the Aussie from the very difficult global economic environment. A$ correlations with equities remain very elevated,” says Sean Callow, a senior currency strategist at Westpac.

“As noted yesterday, we cannot rule out a brief probe back below 0.7000, given the sour equity mood. However, given our core rolling thermal energy crisis theme, which acts as a huge terms of trade boost for Australia, such weakness would provide opportunities to buy given likely more supportive conditions for A$ in Q3,” Callow and colleagues said on Tuesday

Recent losses for international stock and bond markets have lifted the U.S. Dollar and in the process have enabled GBP/AUD to remain buoyant above the 1.74 level early in the new week although there are risks in both directions looming over the immediate path ahead. 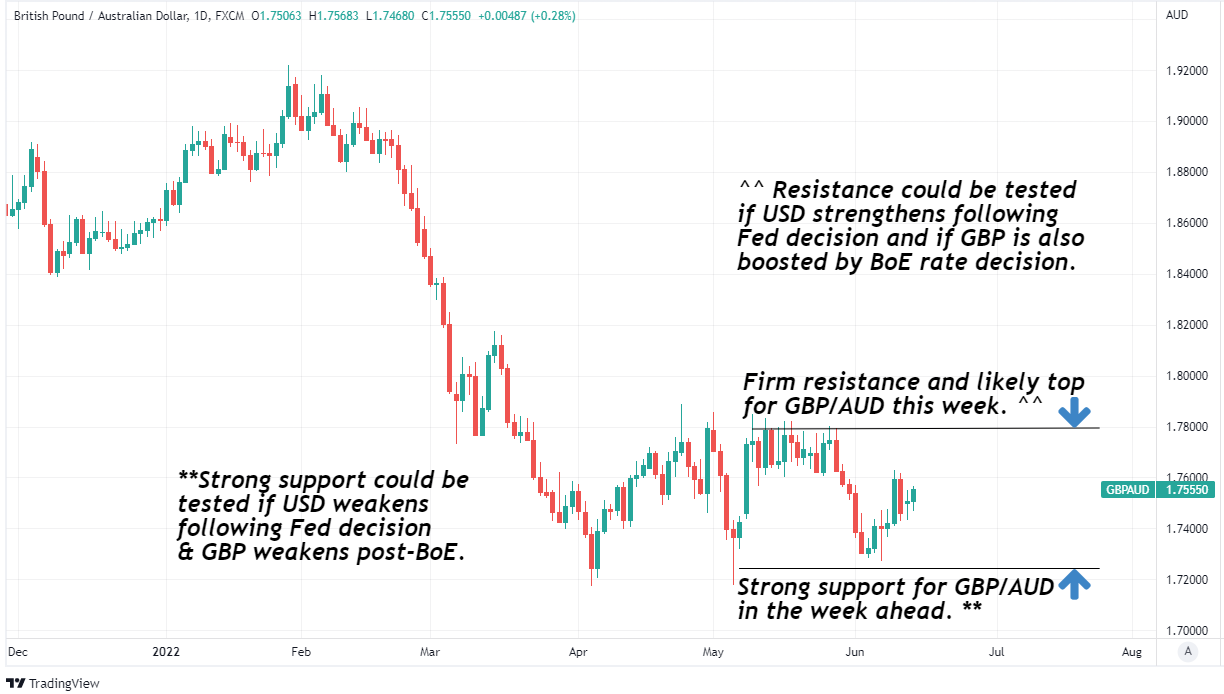 GBP/AUD could be more volatile in the latter half of the week, with directional risk tilted toward the upside if Wednesday’s Fed policy decision leads stock and bond markets to come under further pressure or if, for any other reasons, it leads the U.S. Dollar to strengthen further.

The Pound to Aussie rate often rises alongside the U.S. Dollar exchange rates and this is widely thought to be because of the Australian Dollar’s greater sensitivity to changes in market risk appetite, which can impact prices of Australia’s export commodities as well as lots of other assets.

“AUD/USD can trade heavy, probably test the year-to-date low of 0.6829,mainly because of increased market pricing for a US recession and the associated strong USD,” says Joseph Capurso, head of international economics at Commonwealth Bank of Australia.

“The closure of some districts in Shanghai and Beijing for mass covid testing is a further weight on AUD, and will cause AUD to underperform against the crosses too,” Capurso and colleagues said on Tuesday.

Stock and bond markets have crumbled in recent days while lifting the U.S. Dollar sharply after U.S. inflation figures for the month of May indicated strongly that the pathway back to the Fed’s 2% inflation target is likely to be longer and more arduous than the bank had expected.

This enhances and underlines the risk of the Fed feeling compelled to lift its interest rate in increments and at a pace that would likely act as a headwind for the U.S. economy as well as all others across the world, which would entail ongoing risks of further losses for many asset markets and currencies. 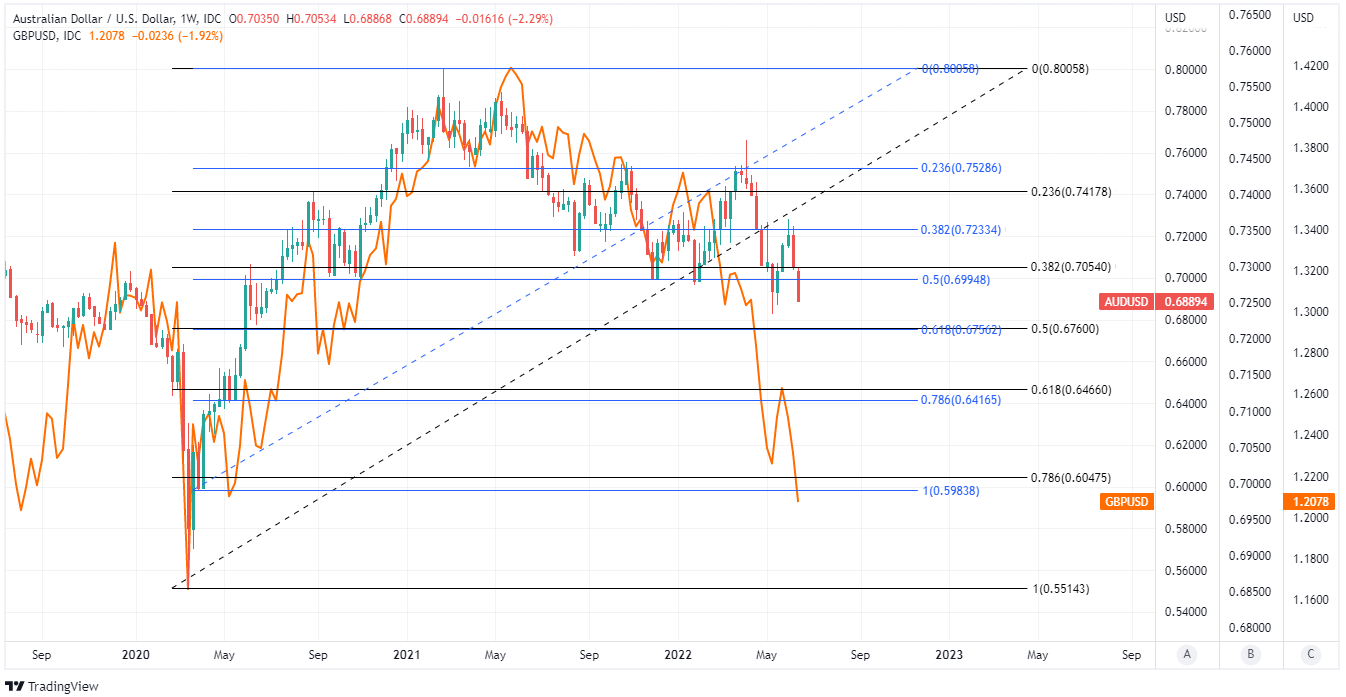 Above: AUD/USD at weekly intervals with Fibonacci retracements of March 2020 and April 2020 recovery rallies indicating possible short and medium-term support levels, and shown alongside GBP/USD. Click image for closer inspection.

That would potentially be a favourable outcome for GBP/AUD, although some strategists see the Fed raising rates by less on Wednesday than the financial markets currently expect, would likely be a supportive outcome for the Australian Dollar and a dampener for GBP/AUD.

“With scant evidence of a slowing in inflation with the higher than expected CPI data for May, the market is expecting the Fed may need to take even bolder action in coming meetings,” says Tommy Kenny, a senior economist at ANZ.

“We expect the US Federal Reserve will raise rates by 50bp at its 14-15 June meeting and reiterate guidance that it intends to return rates to neutral quickly,” Kenny and colleagues said on Tuesday.

Financial markets have recently shifted to anticipate a rare and very large 0.75% increase in the Fed’s interest rate this Wednesday and that potentially leaves the U.S. Dollar and GBP/AUD vulnerable in any event where the Fed elects to raise the Fed Funds rate by only 0.5%.

However, the Pound to Australian Dollar rate’s vulnerability would either return or grow larger still on Thursday if the Bank of England (BoE) raises UK interest rates by only 0.25% as financial markets have recently priced-in some probability of a larger change than that.

"The labour market didn’t appear to tighten further in April, which may push the Bank of England a little closer to raising interest rates by 25bps on Thursday rather than by 50bps. We’re sticking with our 50bps forecast, but it’s going to be mighty close," says Paul Dales, chief UK economist at Capital Economics. 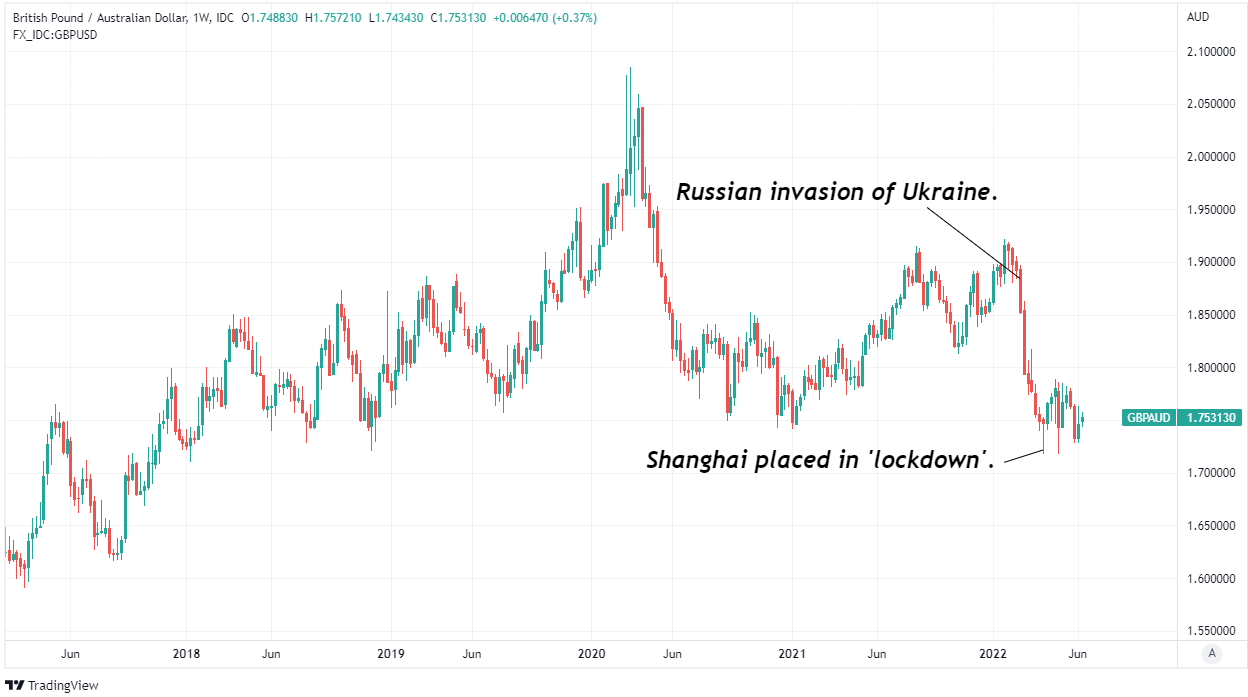 It’s possible, if not likely the BoE will raise Bank Rate to only 1.25% on Thursday after Office for National Statistics (ONS) figures suggested on Tuesday that the labour market may be cooling faster than the bank anticipated.

This was barely a day after other data showed UK GDP falling by -0.3% when financial markets expected 0.2% growth, which also suggests that the economy may be slowing faster than the BoE had anticipated.

That came after inflation rose to 9% in April, which was below the 9.1% forecast of the Bank of the England, which would potentially weigh heavily on Sterling this week if disappointing market expectations for Bank Rate.

This would likely weigh on the Pound to Australian Dollar rate irrespective of the impact that Wednesday’s Fed decision has on Sterling and the Aussie.

But both currencies will also be sensitive on Thursday to the implications of Australian employment figures for May because any signs of a further tightening in the labour market could encourage the Reserve Bank of Australia (RBA) to continue lifting its cash rate in large 0.50% increments.

“RBA Governor Philip Lowe highlighted during an interview this morning that it was “reasonable” to think the cash target rate would reach 2.50% at some point. RBA futures pricing are more aggressive and already imply a cash rate of 3.65% by year‑end,” says Elias Haddad, a senior currency strategist at Commonwealth Bank of Australia and colleague of Capurso.