The Reserve Bank of Australia's November policy update has stifled a strong trend of appreciation in the Australian Dollar, but this is unlikely to result in material weakness says a major Australian lender.

Westpac says last week's RBA policy decision resulted in the Australian Dollar's "worst day" since August, as the central bank rejected market expectations for an interest rate to come as soon as 2022.

The Australian Dollar had risen in value heading into the meeting on the assumption that the RBA would ultimately cave into rising inflationary pressures and raise interest rates, an assumption held on most global central banks.

But the RBA is keen to ensure that bond yields and associated interest rates don't rise as market expectations shift towards expecting higher rates sooner, judging this could be a headwind to economic growth.

Governor Philip Lowe was unambiguous when he said "the latest data and forecasts do not warrant an increase in the cash rate in 2022."

The RBA did abandon one of its covid-era support programmes - Yield Curve Targeting - which could have been construed as supportive of rising bond yields and a stronger Aussie Dollar but "pushed back hard on 2022 hike talk," says Sean Callow, an economist with Westpac in Sydney.

"This has cooled the more extreme bets on RBA hikes, undermining Australian Dollar yield support. This probably still has a way to run," says Callow. 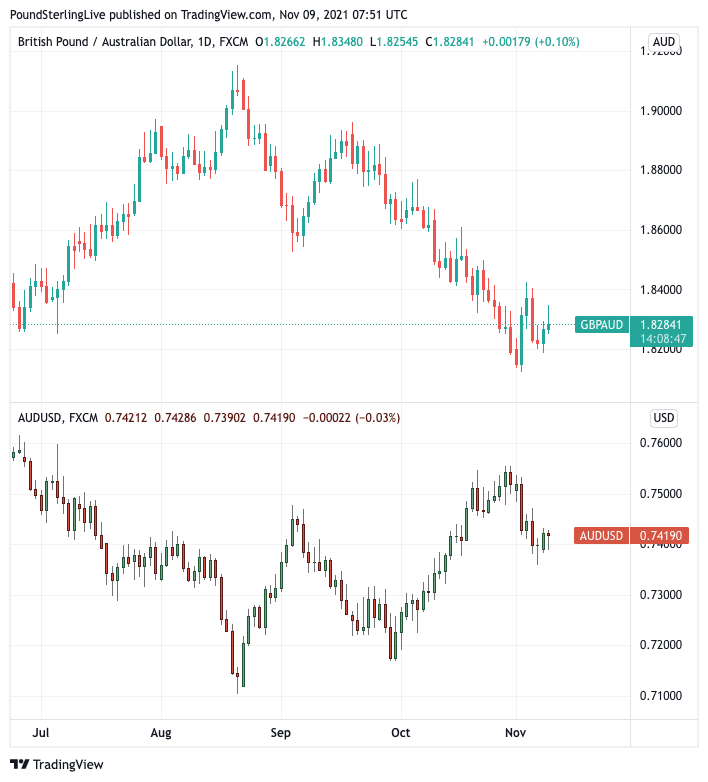 But Callow says the downside pressure on Australian bond yields - a key driver of Australian Dollar valuations - should be relatively limited and is on the lookout for better-than-expected economic data to limit losses.

He joins other economists in looking for Australian economic data to improve given the country's two largest states are exiting a period of strict Covid-related lockdowns.

A key issue picked up on by Pound Sterling Live last week was Australia's strong trade surplus, which came courtesy of surging demand and high prices for Australian natural gas and coal.

"In October, AUD broke out of multi month ranges against the EUR, buoyed by the surge in energy and metals prices. Europe is a large net energy importer and thus exposed to the surge in gas and oil prices. In contrast, Australia may be a net oil importer but it is a large net exporter of energy, thanks to liquefied natural gas and thermal coal," says Callow.

Although the country recorded a near-record trade surplus in September, an unambiguous positive for the Australian Dollar, it appears the top might be in for the current commodity boom cycle. 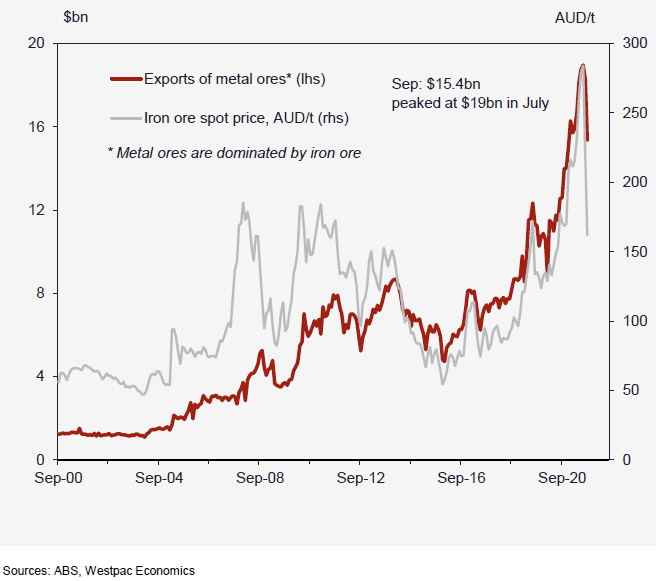 Above: "Metal ore exports and the iron ore price: Rolling over" - Westpac.

Declines in commodity prices will come amidst falling demand for Australia's premier export of iron ore, particularly from China where a slowdown in the country's once exuberant property sector is underway.

But further headwinds will come as demand for natural gas and coal slide as a recent global energy panic subsides.

"Commodity support is also waning and will continue to do so in the official data," says Callow.

But Westpac says Australia will continue to run a trade surplus, and ultimately this is supportive of the Aussie Dollar.