- GBP/AUD support vulnerable in big week for central bank policy
- Underpinning at 1.8250 may fold, prompting slippage to 1.8000
- If RBA follows in footsteps of BoC, or BoE sticks with its guidance
- Wed’s Fed decision also key & could be supportive for GBP/AUD

The Pound-to-Australian Dollar exchange rate could at risk of further declines toward 1.8000 or just above over the coming week as the market digests the latest from the Reserve Bank of Australia (RBA), Federal Reserve (Fed) and Bank of England (BoE).

Sterling was still on course for its sixth week of declines against the Aussie on Friday but had appeared to stabilise above a series of technical support levels including its 200-week moving average at 1.8278 and the 61.8% Fibonacci retracement of 2021’s uptrend.

These levels could be tested further next week however, with price action potentially pushing GBP/AUD toward five-month lows if the Reserve Bank of Australia kicks off a pending central bank bonanza by following along in tracks laid by the Bank of Canada (BoC) this Wednesday.

“Frantic rates markets have scaled up pricing for RBA rate hikes dramatically. But Westpac maintains its view for a steady cash rate until Feb 2023 and expects changes to the RBA’s language next week to be less dramatic than is implied by market pricing. This suggests AUD/USD slips back to say 0.7450 near term but remains a buy on dips on the multi-month/quarter outlook,” says Sean Callow, a Sydney based FX strategist at Westpac.

“Our base case is AUD/GBP to rise only from around 0.54 to 0.55 [GBP/AUD down to 1.81] in coming months, but a change of RBA stance is a wildcard,” Callow wrote in a research presentation this week. 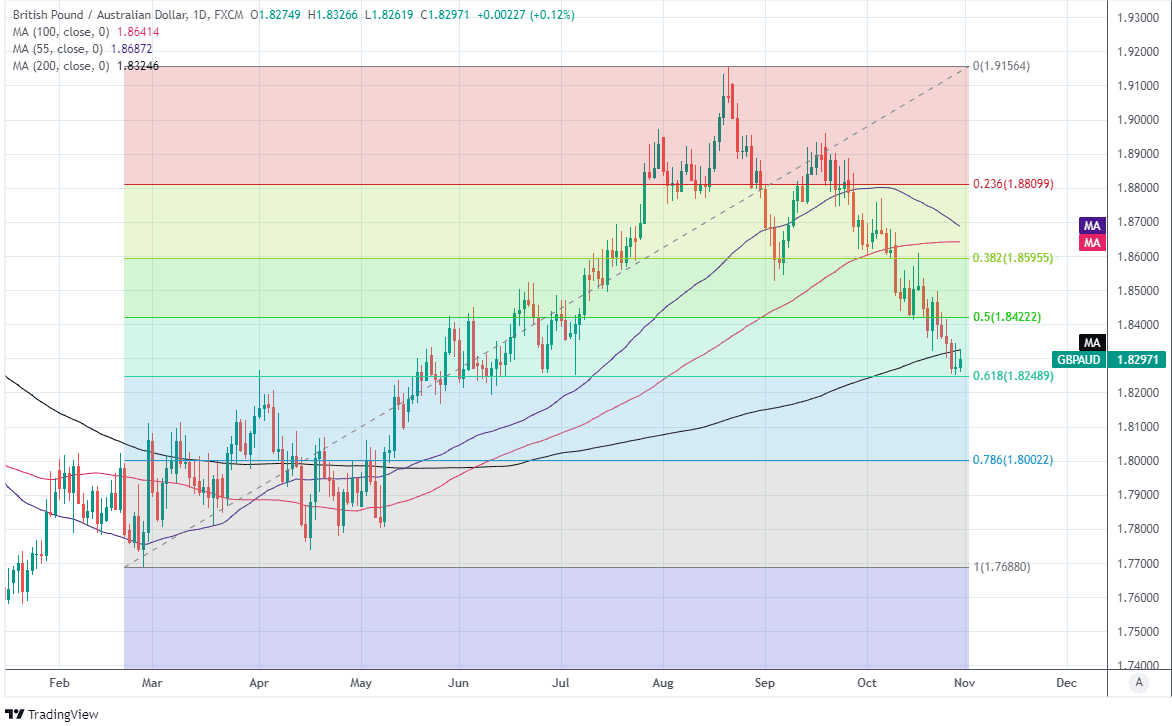 The RBA is set to announce its next policy decision at 03:30 London time on Tuesday and the Bank’s likely choice of words is truly a wild card given recent developments at other central banks and after official data showed Australian inflation rising at an annualised pace of 3% last quarter.

While central banks do still maintain that these levels of inflation are temporary, with the RBA being among the most confident, some have begun to adapt their guidance and clear a pathway toward the possibility of interest rate rises that come sooner than was previously suggested.

“We now think it will be the middle quarters of next year, so if you want it in months, sometime between April and September. That is signaling that we’d expect to be considering increasing our policy rate. That’s our plan,” BoC Governor Tiff Macklem said this Wednesday.

The RBA’s guidance has been that its cash rate is likely to remain at 0.10% until 2024 because years of too little inflation taught it that significant improvements in Australian wage growth would be necessary to sustain inflation rates within the target band of 2-3% over the medium-term.

Financial markets clearly have an entirely different idea and have wagered of late that Australia’s cash rate could rise from 0.10% to more than 1% by the end of 2022, with expectations escalating dramatically this week and pushing Australian government bond yields higher in the process.

“The April 2024 bond is now yielding nearly 70bp above the RBA’s target. The RBA’s inaction this week means we can only assume that at Tuesday’s Board meeting this target will be abandoned. The difficulty for the RBA is that this will also require a change in their forward guidance on the expected timing of the first rate hike,” says Carol Kong, a strategist at Commonwealth Bank of Australia.

Should the RBA follow in the footsteps of its Canadian counterpart on Tuesday it could be supportive of the Aussie, likely lifting or otherwise propping up AUD/USD and just at point when Sterling may be subdued by uncertainty over the outcome of next Thursday’s Bank of England decision.

GBP/AUD always closely reflects the relative performance of AUD/USD and GBP/USD so the above combination would be a headwind that leaves Sterling in need of a ‘hawkish’ Federal Reserve and Bank of England on Wednesday and Thursday in order to keep afloat. 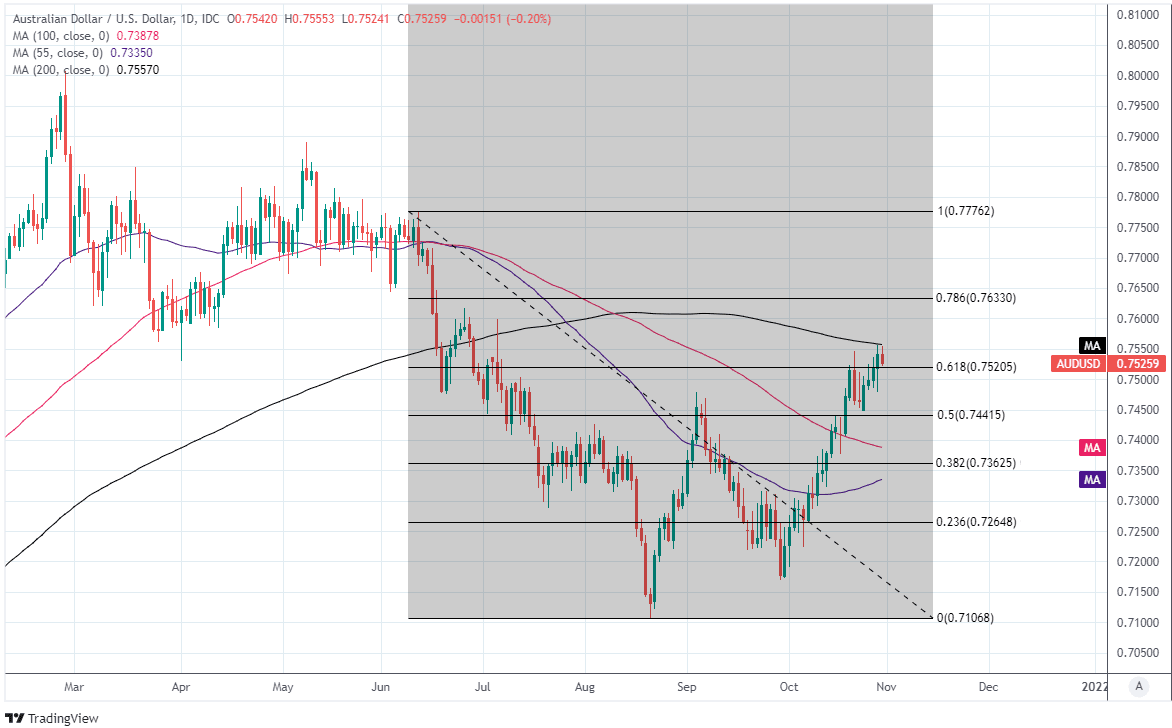 A hawkish Federal Reserve cannot be ruled out for reasons outlined here, and may even be a likely outcome, which would help to arrest any RBA-induced declines in GBP/AUD next week because the exchange rate tends to benefit from strength in the U.S. Dollar.https://www.poundsterlinglive.com/usd/16100-pound-to-dollar-week-ahead-forecast-oxygen-thins

But Thursday’s Bank of England decision will also be crucial for Sterling after September’s suggested there is scope for an increase in interest rates to be announced in the near future, which may have played a role in prompting the market to bank on an increase being announced in November.

“We have brought forward, to this quarter, the time when we expect the BoE to start rate normalisation(+15bps to 25bps). That said, current market pricing for policy rates by end 2022 looks too aggressive (bank rate 1.25%). We think there are solid macroeconomic justifications for GBP appreciation to do some of the heavy lifting,” says Brian Martin, a senior international economist at ANZ.

The BoE’s September policy decision and minutes did also suggest, however, that members of the Monetary Policy Committee (MPC) want clear evidence of employment and inactivity levels in the labour market continuing to normalise in the final quarter before voting to take any action.

These data won’t be available until December and January, which could mean that next Thursday’s decision disappoints the parts of the financial markets that have come to anticipate a November rate rise, meaning that it too is a potential headwind for GBP/AUD next week.