Strategists at RBC Capital Markets have anointed GBP/AUD as the "trade of the week", saying they are going "long".

Going 'long' is trader parlance for entering a trade that seeks to deliver a positive return if the underlying asset rises.

In this instance, the Pound would gain in value against the Australian Dollar.

The call is made at the start of a week in which Australia and the UK will both release employment data which will expose divergent fortunes for the two economies, with associated knock-on effects for central bank policy. 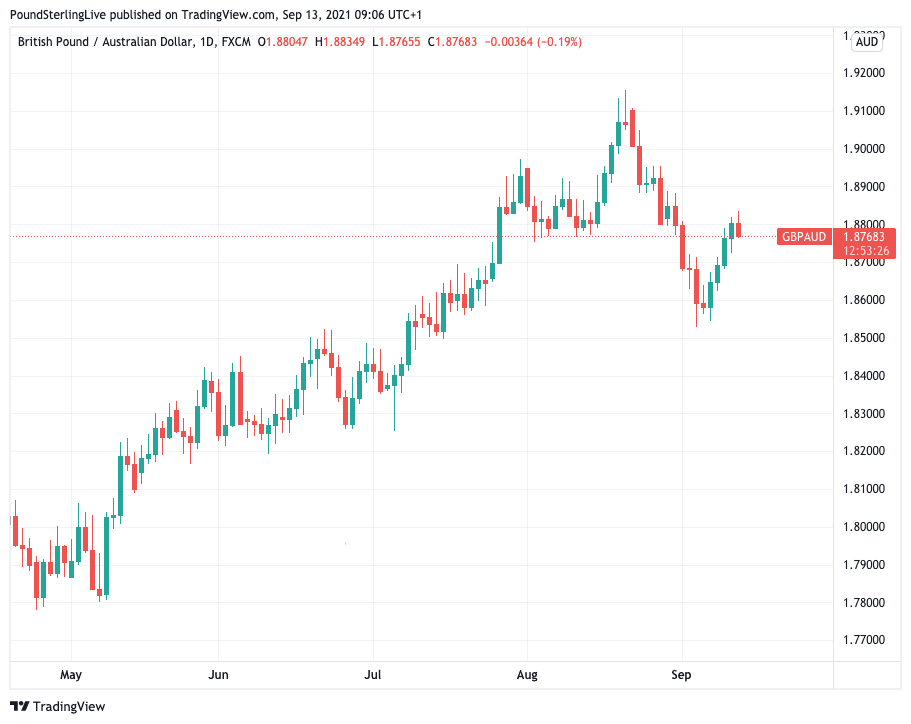 The Pound-to-Australian Dollar exchange rate (GBP/AUD) has risen for five days in succession now, with a low at 1.8536 reached on September 03 giving way to a return to this Monday's high at 1.8836.

The UK will release labour market statistics on Tuesday at 07:00 BST while Australia's release comes on Thursday.

"This week’s labour market data will capture the start of the furlough scheme taper, but other indicators of labour demand suggest the response will be very different to the last attempt to close the scheme down last autumn, when unemployment rose," says Adam Cole, Chief Currency Strategist at RBC Capital Markets.

While the UK has been gradually ending government support to those workers unable to work because of the pandemic the country's jobs market is now witnessing record unfilled vacancies.

The transition for those who have lost jobs into new roles will determine the scale of any post-furlough jump in unemployment.

These data are however only due in November as September sees the final closure of the scheme.

But this week's numbers will capture the initial withdrawal of furlough support.

The unemployment rate is expected to read at 4.6% in July, down on the previous month's 4.7%.

Another figure that could illicit an exchange rate response is are wages: the Average Earnings Index + Bonus is expected by consensus to have risen by 8.2%, a number that points to the potential for elevated inflation in the outlook.

"In contrast, this week’s labour data in Australia will show the impact of the lockdowns in NSW and Victoria and we look for a larger-than-consensus drop in employment, which should reinforce the RBA’s dovish forward guidance," says Cole.

Consensus expects Australia to report 80K jobs were lost in August, a sharp deterioration on the +2K figure of July.

How these jobs data input into investor expectations regarding monetary policy stances at the Bank of England and Reserve Bank of Australia will matter for their respective currencies.

"Most G10 central banks are either well priced for normalisation (RBNZ, BoC) or for on hold indefinitely (ECB, BoJ), but the BoE falls somewhere between the two," explains Cole.

"This week, we think the balance of risks is that the pendulum swings toward normalisation," he says of the Bank of England.

The playbook says those central banks that return policy to normal settings ahead of peers will bestow an advantage on their respective currencies.

Normalisation at the RBA has been dented by the economic decline that comes in response to lockdowns in the country's two most populous states of Victoria and New South Wales.

This suggests to Cole that expectations for the direction of Australian interest rates remains too optimistic: "even the gentle upward slope in the forward rates curve in AU looks too steep."

Australia's battle against the Delta variant has meant the government has dropped its zero-covid policy and now intends to reopen affected states once 70% of their population have been double vaccinated.

New South Wales expects this threshold to be met by mid-October.

However, the state's Premier on Monday said some rules would be relaxed to allow for the meeting of small groups in outdoor spaces.

The progress could help limit downside pressures on the Aussie.