The Australian Dollar is meanwhile hampered by uncertain equity market conditions and a stalling in the rally of iron ore - Australia's key export and a driver of fundamental Aussie Dollar valuations.

The Pound-to-Australian Dollar exchange rate (GBP/AUD) is at 1.8023 at the start of the new week and a positive daily close will mean the pair has completed four days of consecutive gains.

The immediate objective for Sterling bulls will be the February 26 multi-week peak at 1.8111 where some resistance might be encountered. 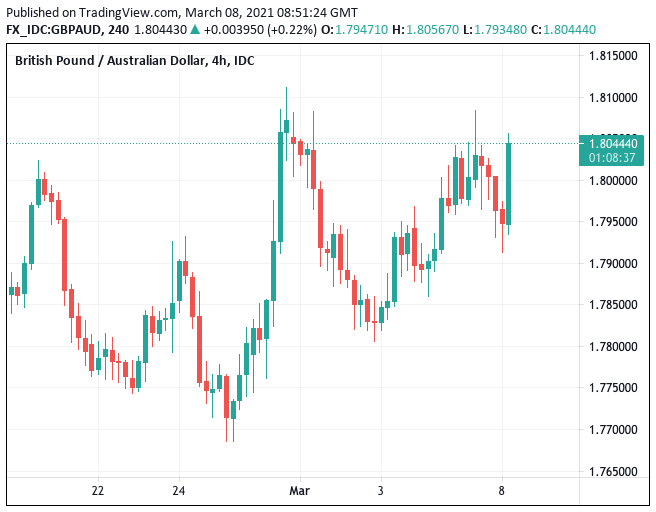 Above: GBP/AUD in a strong start to the new week.

The Pound is broadly higher at the start of the new week, advancing against all major G10 currencies as its period of outperformance extends.

In a briefing note to clients, analysts at Citibank say Sterling represents the best way to play the reopening and reflation themes while avoiding correlations to key macro factors.

"As such, they add another factor to our growing list of supports for GBP H1 outperformance," says Kurran Tailor, analyst at Citi.

The Australian Dollar is meanwhile unlikely to receive any domestic guidance until a speech from Reserve Bank of Australia Governor Philip Lowe arrives on Wednesday.

Lowe will address the sharply rising yields on Australian government bonds, which are seen as posting headwinds to the economy's recovery prospects given higher yields signify raise the cost of finance for domestic firms.

"Rising bond yields have caught the eye of market participants in recent weeks. The lift in Australian bond yields has outpaced that of the US by some margin, prompting additional QE purchases and strong words from the RBA," says David Plank, an economist with ANZ.

But it is not just in Australian where bond yields are rising, it is a phenomenon common to most developed markets.

The rise in yields on ten-year U.S. government is of particular interest as the moves have correlated with a pullback in stock markets, to which the Australian Dollar is generally positively correlated. Therefore the currency appears to have failed to benefit from any yield advantage Australia has enjoyed of late.

Investors are fretting that rising yields pose a headwind to the recovery and stocks have reversed the strong gains seen heading into early 2021 as a result, creating conditions conducive to Aussie Dollar underperformance.

"Antipodeans come under pressure amid elevated volatility," says Marek Raczko, an analyst at Barclays. "Recent AUD resilience, against the USD, could come under some pressure, in our view. Headwinds from weakening risk sentiment and the relative move in rates should start to exert some influence, especially after strong domestic data and a 'neutral' RBA supported the AUD last week."

Iron ore prices rallied sharply in early February but then consolidated from mid-month onwards, depriving the currency of upside support. 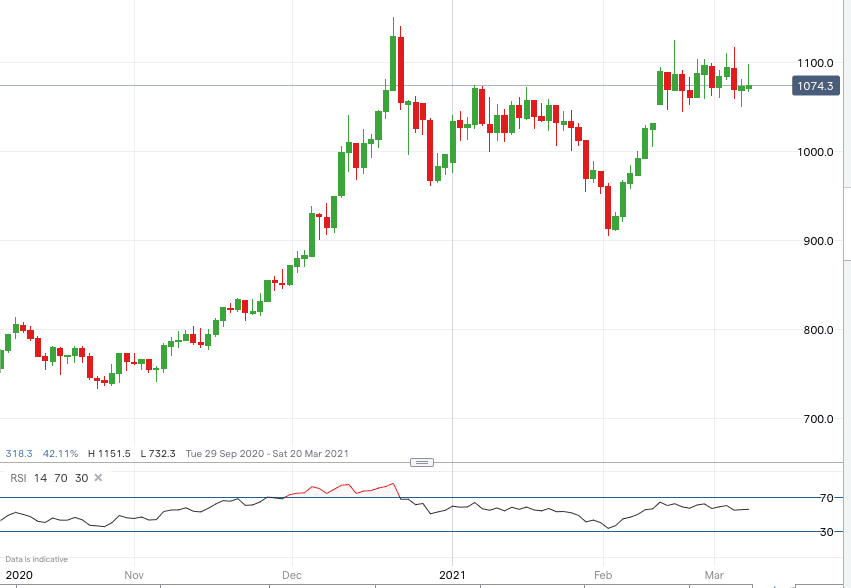 "The antipodeans have recently been and will continue to be driven by global macro factors including equities, commodities and the USD more broadly. In the short-term that suggests further volatility," says Taylor.

The Australian Dollar tends to benefit from rising iron ore prices given the build commodity is Australia's largest export and foreign exchange earner.

The importance of iron was made all the more apparent in last week's trade statistics that showed Australia continues to run a substantial trade surplus, largely thanks to the sharp rise in iron ore prices.

It was reported by the ABS on Thursday that Australia's trade surplus in goods and services hit A$10.1BN in January, a fresh record high. This represents a A$3.0BN improvement on December, which was revised up from A$6.9BN to A$7.1BN.

But any rebound in the Australian Dollar could well be put on hold until such a time as iron ore prices begin to rise again.

"Sentiment was also dented after the National People’s Congress, announced it would be targeting only 6% GDP growth in 2021, much lower than the market's expectations," says Plank.

The annual session of China’s National People’s Congress (NPC) opened on March 5 and set out the government's latest growth targets and outlined further details for the 14th five year plan.

The government detailed a relatively conservative growth target of above 6% year-on-year with a view to being consistent with the target set for the rest of the 14th Five-Year Plan.

The targets for the labor market which includes the planned creation of 11m new job creations and a 5.5% surveyed urban unemployment rate, have been restored to the pre-covid-19 levels.