The Australian Dollar fell against a basket of currencies, despite broadly supportive global market forces in the form of rising stock markets.

This comes on top of official figures revealing Chinese factory activity grew at its fastest in three years.

Japanese factory activity meanwhile moved closer to stabilisation too, coming in at a 49, which is ahead of economist expectations.

The data should have provided an impetus for the Asia-focussed and pro-growth Australian Dollar, but the currency is only making progress against the 'safe haven' yen and dollar, which typically lag when market sentiment is on the up:

Above: The AUD lagged peers on Tuesday, Dec. 01.

There are two potential factors specific to the Australian Dollar that might explain the underperformance.

The Reserve Bank of Australia (RBA) left interest rates and quantitative easing settings unchanged at its final meeting of 2020, and it will only be in February when we next hear from the central bank.

While holding policy settings unchanged was expected, the RBA made it clear the Australian Dollar's value was being monitored.

In a statement the RBA said, "the Bank's policy response has lowered interest rates across the yield curve, which will assist the recovery by ... contributing to a lower exchange rate than otherwise".

Since the RBA cut rates and announced Quantitative Easing on November 3, the trade-weighted Australian Dollar - a measure of the currency's value against a basket of key trading partners - has actually risen by 3% while Westpac's export weighted commodity price index has jumped 6%.

The rising value of the Australian Dollar acts as a headwind for domestic growth as it lowers earnings of Australian exporters. 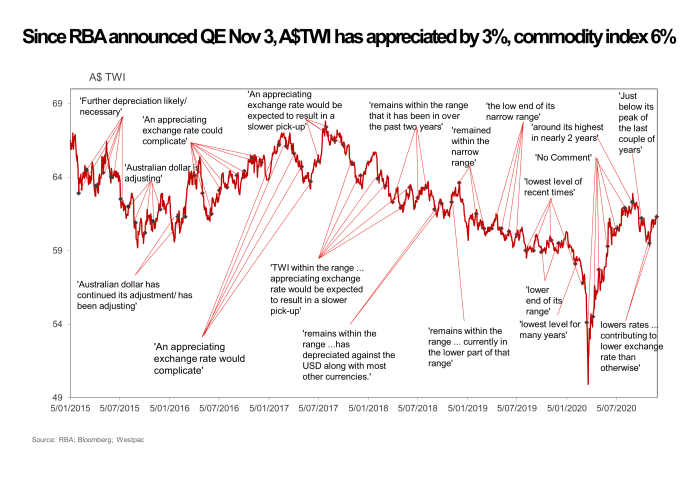 The RBA's statement therefore hints at the currency's value as being a consideration and economist Antje Praefcke at Commerzbank says it is conceivable that the RBA would cut interest rates further if the Australian Dollar were to rise too far.

"It is not even excluding a rate cut to levels below zero, even if it is only likely to implement this step if the Australian dollar was to rise too strongly thus making it more difficult for the economy to recover and inflation to return into its target range," says Praefcke.

However, for that to happen Praefcke says the AUD/USD exchange rate would probably have to breach 0.75 towards 0.80. The Australian Dollar-U.S. Dollar spot exchange rate is quoted at 0.7368 at the time of publication.

"Next year the aussie is likely to benefit from the positive news from China and the slow fall in risk aversion on the markets," says Praefcke.

In response to the RBA decision, economist Robert Rennie at Westpac says the strength in commodity prices including iron ore, copper and aluminium remains supportive for the Australian Dollar, "though the current trade issues with China remain a concern and a factor that should limit strength above 0.7400. We prefer waiting for dips towards 0.7220/50 to buy".

China is a key concern for Australia's trade outlook in 2021, given an apparent deterioration in relations between the two countries.

Australia's backing of U.S. geopolitical policy and its criticism of China's early handling of the covid-19 pandemic has drawn Beijing's ire over recent months, resulting in tariffs and restrictions being placed on a number of Australian agricultural imports. The concern is that a disgruntled China flexes its muscle further over coming months and starts impacting Australia's foreign exchange earning potential.

The spat continued up at the start of the week after Global Times Editor Hu Xijin - seen as a mouthpiece of the regime - ran a leader entitled "China's goodwill futile with evil Australia".

Xijin's extraordinary attack comes after China refused to apologise after a Chinese foreign ministry spokesman posted a doctored image depicting an Australia soldier cutting the throat of an Afghan child.

"Australia's evil acts toward China have made Chinese society not only surprised, but also disgusted. Many Chinese people feel as if they have swallowed a fly when hearing about Australia.How arrogant and shameless the Morrison government is!

"Australia treats China's goodwill with evil. It is not worthy to argue with it. If it does not want to do business with China, so be it. Its politics, military and culture should stay far away from China - let's assume the two countries are not on the same planet.

"As a warhound of the US, Australia should restrain its arrogance. Particularly, its warships must not come to China's coastal areas to flex muscles, or else it will swallow the bitter pills."

How the relationship between Canberra and Beijing evolves in 2021 will be important for the Australian Dollar as the risk is China targets the more important Australian exports, such as iron ore.

For now China has only introduced tariffs and restrictions that have largely targeted agricultural goods.

But, there is a great deal more China can do given Australia's dependence on the world's number two economy.