The Australian Dollar advanced against most major rivals on Wednesday in a performance that was incongruous with its commodity sensitivity and investors’ increased concerns over the European coronavirus situation, although some analysts say this strength is likely to fade promptly.

Australia’s Dollar was higher against all major currencies other than safe-haven Yen and U.S. Dollar on Wednesday, while the Japanese and U.S. currencies were also relative outperformers amid speculation suggesting some major European economies are on the verge of renewed ‘lockdown’.

Germany is said to be contemplating the forced closure of bars from November 04 while French officials are reported to be advocating that the government impose another all out ‘lockdown’ on the country following weeks of explosive increases in the number of new infections detected.

The U.S. Dollar was higher, with the Dollar Index rising for a third consecutive day and most notably at the expense of European currencies which sank with the Euro-to-Dollar rate.

"You won’t have known it looking at AUD/USD, rallying half a percent on very little, which seems like a fade as a day trade," says a trader on the J.P. Morgan dealing desk in London. "CPI was a little higher than expected in Australia overnight, but in a real rates focused world, I’m not sure how much that helps the currency as I don’t think it stops the RBA from easing, possibly as early as next month. Risk is in the driving seat heading into the US election and the antipodes should track it as such." 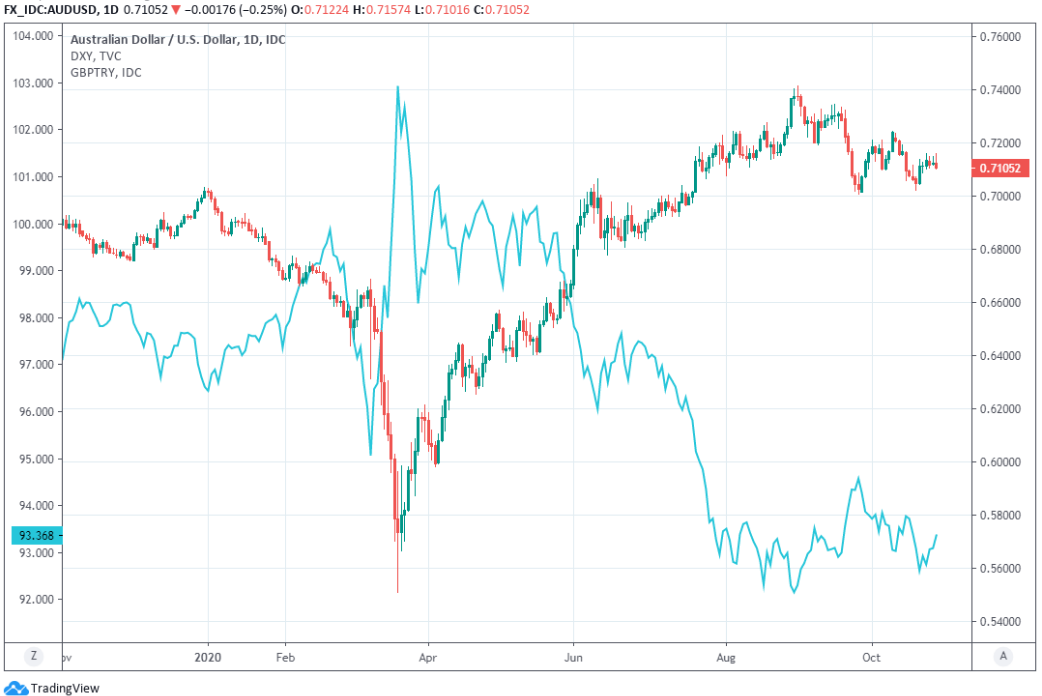 Risk aversion percolated across global markets but the Aussie experienced a bid after third-quarter inflation came in higher than was expected with just days to go before the next Reserve Bank of Australia (RBA) policy decision that’s expected to see the cash rate cut to a new low of 0.10% and the bank’s quantitative easing programme expanded.

Inflation rose at an annualised pace of 1.6% in the third-quarter, partially reversing a -1.9% fall from the prior period while surpassing the 1.5% that was anticipated by consensus, although annual price growth remains below the lower band of the 2%-to-3% target range.

A weak economy that's burdened by pandemic-related spare capacity is a key driver of the downbeat inflation outlook that's pushing the RBA to act again.

"Given cemented expectations for further easing at the November RBA though, today’s data initially did little to move AUD, however, we have noted a bid emerging ahead of London, with spot now seen +0.4% vs the NY close at 0.7155 at the time of writing," says Kurran Tailor, an analyst at CitiFX. "Ahead, CitiFX Strategy and spot trader John Nihill expect the RBA to pursue further easing at the November RBA, with a rate cut and an expansion of the LSAP programme to longer tenor bonds on the cards." 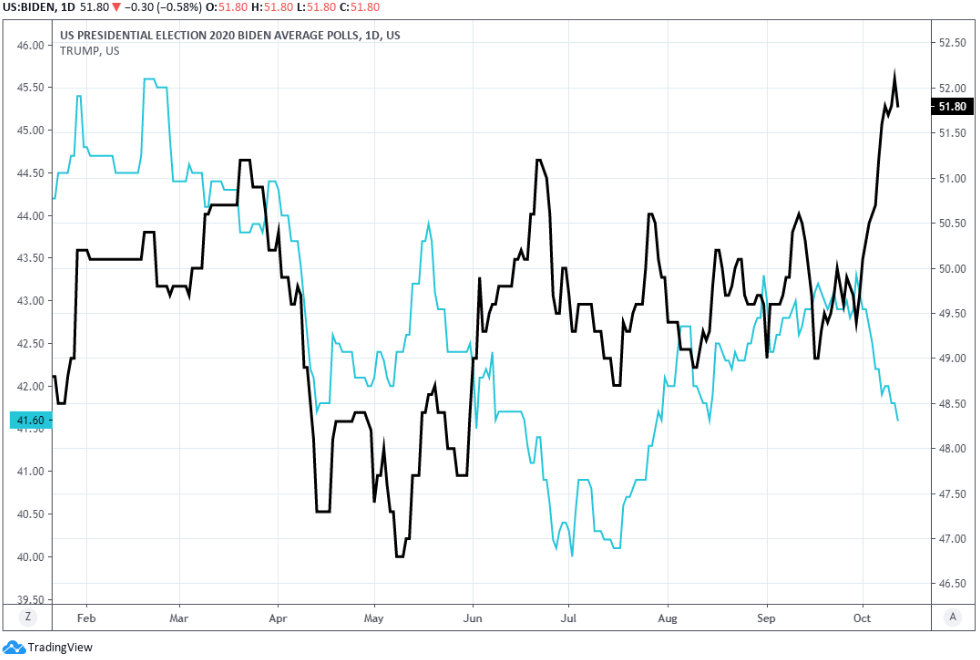 Interest rate derivative market pricing has suggested for some time that the anticipated RBA rate cut is already reflected in the price of the Aussie which, when combined with the third-quarter inflation surprise, likely explains Wednesday's outperformance by the Aussie. But analysts see it making little difference to the RBA or the outlook.

“Australia’s Q3 20 CPI report had no material impact on AUD/USD,” says Joseph Capurso, a strategist at Commonwealth Bank of Australia. “AUD’s resilience may reflect positioning changes ahead of next week’s RBA meeting or US election or the proposed $A9bn take‑over of a food and beverage manufacturing company.”

The Australian Dollar tends to follow international stock markets and commodities, both which lend it an inverse correlation with the U.S. Dollar. European coronavirus concerns could lift the greenback and weigh on the Aussie once the antipode’s nascent strength subsides, but the outlook for the U.S. currency is hinged most substantially on the outcome of next Wednesday's presidential election, which markets see producing a Democratic Party-led administration under opposition candidate Joe Biden.

"Asia is still winning the economic fight against the virus and the Australian dollar will be a long-term beneficiary. So, as we wait for US trade data, more Covid news, smoke coming out of the window from trade negotiators, and the Bank of Canada's likely no-change policy decision, I'm still hoping to get long AUD/USD below 0.71 with a stop just below 0.70," says Kit Juckes, chief FX strategist at Societe Generale. 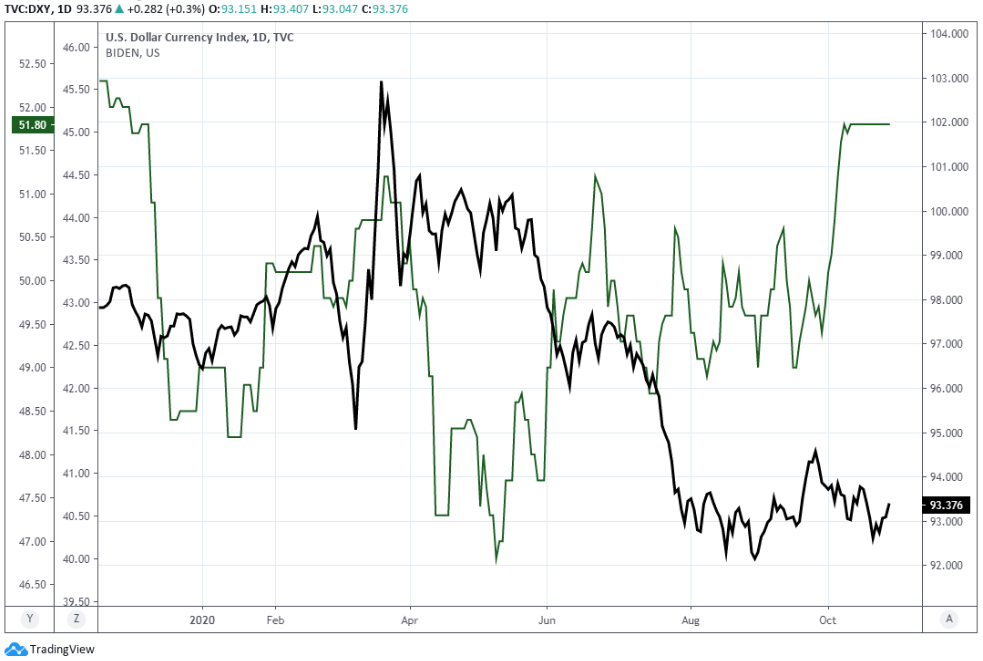 "With a bit of luck, we will then know the outcome of this soap opera, whose only merit will have been to bring some change after months of media hype about the coronavirus. We can barely wait to see the end of it and move on," says Yves Bonzon, group chief investment officer at Julius Baer. "The risk remains, however, that we will not be further ahead on the morning of 4 November in the event of an undecided result or a challenge by Donald Trump if he is declared the loser. Let us hope that this will not be the case, as risky assets would probably not take it well."

Biden’s spending plans are expected to produce an even higher budget deficit than would potentially be the case under President Donald Trump, leading to further Federal Reserve U.S. Dollar creation, while his tax and regulatory programmes are likely to weigh on the U.S. economic recovery.

Markets have recently come close to pricing out any prospect of a Trump victory so would face a sharp adjustment that weighs on the Aussie in the event that a second Trump administration is the result of the ballot.

“The national U.S. polling averages ahead of the election continue to show a commanding Biden lead, but that lead has shrunk perceptibly from over 10% to closer to 9% in recent days, and the predicted market for whether the Democrats can take the Senate has dropped back to 57% after trading as high as 70% at the beginning of the month,” says John Hardy, head of FX strategy at Saxo Bank. “Whether the Democrats can take a majority in the Senate is a huge issue in this election, as Biden will have a hard time getting anything done on stimulus without both houses of Congress on side.”